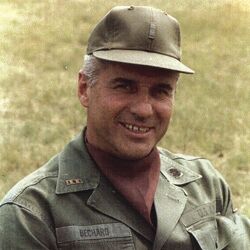 Bud graduated from Bellows Free Academy in 1943. He entered the U.S. Marine Corp in August of 1943 and served until July 1946. Upon his return to Vermont, he enlisted in the Vermont National Guard as a member of the 43rd Division in 1948. He was called to active duty during the Korean conflict in September of 1950 and served with the Occupational Troops in Germany. He separated in June of 1952, and returned to The Vermont Army National Guard, serving as a full-time member until his retirement in April of 1986 as a Chief Warrant Officer. At this time, he continued to serve our state in the Vermont State Guard, retiring after serving 60 years total.

Bud enjoyed retirement, boating, fishing, hunting and golfing. In the winter, he enjoyed his snowmobile and especially downhill skiing, until the age of 89.

Bud is survived by his two daughters, Lucinda J. Kuczer and her husband Gene of Foster, RI, and Joan R. Machia and her partner Mike Rich of Swanton, four granddaughters, Amy Hartman and her husband Robert of Somers, CT, Robin Quartulli and her husband Kevin of East Longmeadow, MA, Laura Larose and her husband Jason of Enosburgh, and Andrea Spears and her partner Justin Sartwell of Franklin, 10 great-grandchildren, Andrew and Ethan Hartman, Quinn Li and Zoe Lin Quartulli, Madisyn Spears, Ayden, Ella, Jaeley and Jaxon Larose. Bud also leaves his sister-in-law Gloria Bechard of St. Albans. Besides his parents and wife Eleanor, he was predeceased by his sister Jane Houle, and his brother Elliott Bechard.

A Mass of Christian Burial will be celebrated on Tuesday, August 25, 2020, at 10:00 a.m., in Holy Angels Church. Interment will follow at 1:00 p.m. in the Vermont Veterans Memorial Cemetery. As an alternative to flowers, memorials in Bud’s name may be made to the Vermont Children’s Hospital at UVM, 111 Colchester Avenue, Burlington, VT, 05401. Arrangements are entrusted to the Brady & Levesque Funeral Home, where online condolences and memories may be shared with his family at: www.bradyandlevesque.com.