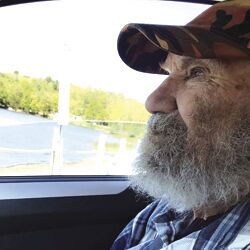 BERKSHIRE – Fred E. Nichols passed away on July 12, 2020. Fred was 89 years old. He was born in Sheldon, Vt., on April 7, 1931 to Frank and Gladys Nichols (Real). He leaves behind him his loving wife of 56 years, Beverly Nichols (Minkler); son Jay Nichols and his wife Christine Nichols; son Scott Nichols; and his pride and joy biological granddaughter, Kendal Nichols. He is also succeeded by his sisters Viola Perron and Lillian Mailoux; brothers Ralph “Buddy” Nichols, his wife Geraldine Nichols and half-brother William Graham, as well as sisters-in-law Julie and Jeannette Nichols. In addition to Kendal, he also leaves behind grandchildren Dustin Rushlow, Elizabeth Ladd, and Paul Ladd and eight great grandchildren: Konnor, Colin, Karson, Corinne, Camille, Kaylen, Cora, and Lutka.

Fred graduated from B.F.A. Saint Albans. After graduation, he served in the U.S. Army during the Korean Conflict as a paratrooper. He received the Korean Service Medal, 2 Bronze Service Stars, the National Defense Service Medal, a United Nations Service Medal, and a Combat Infantry Badge. After Korea, he farmed, eventually owning two farms and served for over three decades as an Artificial Cow Inseminator. Other than his years in Korea, Fred lived life-long in Franklin County, Vermont.

Fred loved to hunt, fish, cut wood and enjoy the outdoors. Into his 80s, he was going to the woods every day and still cut his own firewood. He loved spending time at his house with Kendal and Beverly and spending time around grandchildren and great-grandchildren.

Per Fred’s wishes there are no public services planned. Please visit awrfh.com to share your memories and condolences.