David was a long-time resident of St. Albans and South Hero. Though he moved to Bonita Springs, Florida thirty-one years ago, he still thought of Vermont as his home. David’s life revolved around agriculture. From his early years working on the family farm and driving the cattle truck for Swanton Packing, to his career in the Florida produce business, the rhythms, rewards, challenges, and unpredictable nature of farming were true reflections of David’s character.

David was an avid outdoorsman. He cherished his annual deer hunting trips, and more often than not, had a full freezer to show for his efforts. More than anything though, he loved fishing. Whether sport fishing off the Florida coast, pulling perch and bass from Lake Champlain and Lake Carmi, or catching brook trout out of Vermont’s cold streams, nothing brought David more peace than casting a line.

David’s passing has been hard on all of us, but with death comes reflection. Life was not easy for David, and he was often his own worst enemy. And yet, the memories that he’s given us and the lessons that he’s taught us will be his enduring gift. With perspective, we see how fortunate David was during his life. He had a large, loving family; he was able to be at Coors Field cheering on his beloved Red Sox when they won Game 4 of the 2007 World Series; and he had Debbie’s unyielding and unconditional love and support, as well as the great joy he got from her family and grandchildren, Tyler Thompson, Hailey Zuniga, Whitney Zuniga, and Nicholas Thompson Jr. David has left us way too soon, but we are all the better for having had him as part of our lives.

There are no services planned.

Honored to be serving the Read family is the Heald Funeral Home, where messages of condolence are welcome at www.healdfuneralhome.com. 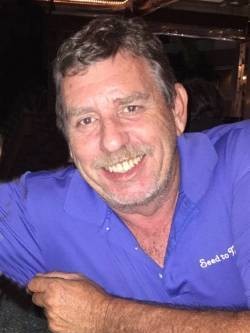