Calvert Norris Foster Jr, better known as Chip, passed away at his home in Boynton Beach on Friday May 28th at the age of 56.

Chip was born December 10th 1964 in Bristol, CT the son of Calvert N. Foster, Sr. and Patricia (Cronin) Foster. He grew up in Cabot, VT for a few years then moved to Hardwick, VT and attended the local Elementary schools and Hazen Union High School then went on to be a Vermont National Guardsman. He worked with his family at Riverside Beverage in Hardwick and Caspian Arms Ltd. in Wolcott.

Chip and his partner of 28 years Kevin W. Lange were married in 2010. He and Kevin split their time enjoying the homes they renovated together in Bakersfield, VT and Florida.

Chip was like a rare antique find. They just don’t make them like that anymore. He was beautiful on the outside with his constant smile and infectious laugh and even more beautiful on the inside. It came natural to him to brighten up your mood on your worst days and made your good days even better with his need for adventure and fun. Living each day in the present and each moment to the fullest is what he did. Chip always enjoyed striking up conversations with complete strangers. Everyone has a story and he was always interested to hear them. Each person in Chip’s path was important and significant, doing what he could to lift them up and make them feel worthy. Without a doubt, Chip spread so much positivity and love around to make a lasting impact for many years to come to many people. He will continue to live with each of us every day.

Chip leaves behind his husband Kevin, twin daughter Heather Foster and her fiancé Jordon Maynard and grandchildren Liam and Juliette, twin daughter Patricia Foster with her boyfriend Robert Coates and granddaughter Vanessa and his daughter’s mother, Laurie Fadden. His mother, Patricia Foster, sister Julie and her husband Walt Ackermann, sister Jayne Fradette, brother Scott and his wife Ruth Foster, sister Amy and her husband Woody Smith. Many cherished nieces and nephews along with their families and so many aunts, uncles and cousins.

Graveside services were held June 8th at the Durant Cemetery in Cabot, VT with his family followed by a luncheon at his mother’s home. 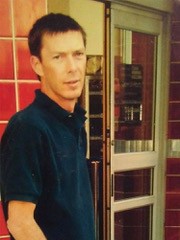