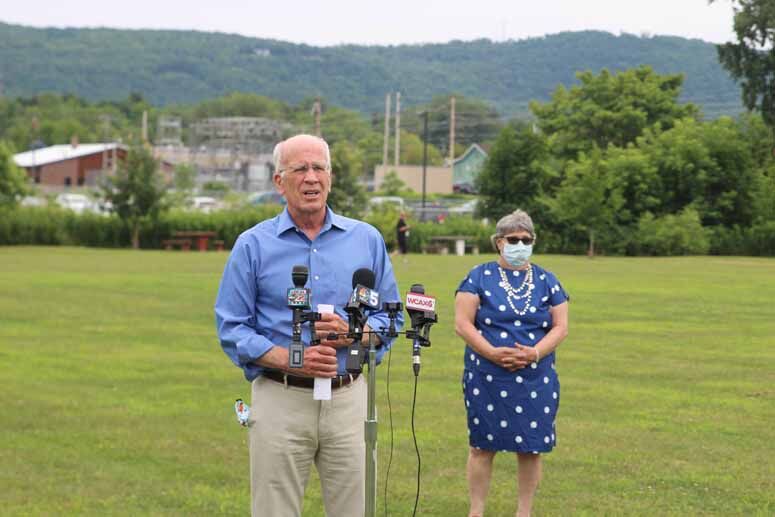 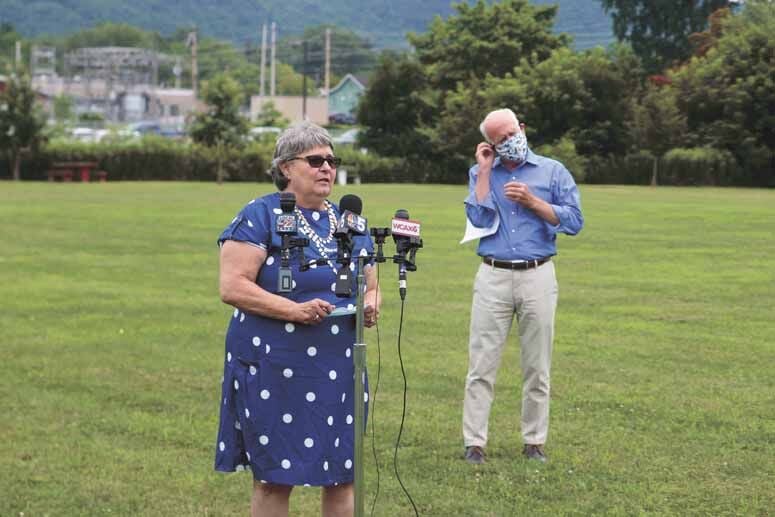 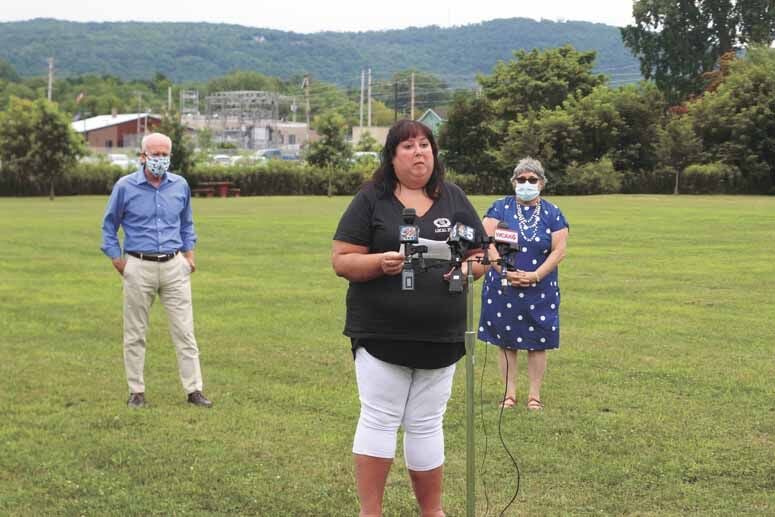 Kelly Robtoy, who heads the United Electrical Workers’ local chapter representing contract workers at USCIS, speaks to the press on Wednesday at an event organized by Congressman Peter Welch’s office.

He also said that he, together with Senators Patrick Leahy, D-Vt., and Bernie Sanders, I-Vt., will do everything they can to “reverse this terrible decision.”

On Tuesday, Leahy, and Sen. Jon Tester, D- Mont., announced they had discovered USCIS’s reported deficit of $571 million in fiscal year 2020 did not exist. Instead, the senators announced, USCIS has a surplus sufficient to allow it to continue to employ all of its staff through the end of the current fiscal year on Sept. 30.

“Their assertion they were out of money turned out to be untrue,” Welch said.

USCIS employs 1,700 Vermonters, primarily at the Vermont Service Center in St. Albans and Essex. In addition, 400 contract workers provide support to USCIS personnel. No layoffs have been announced for those workers.

Welch was joined by Danielle Spooner, president of the American Federation of Government Employees (AFGE) CIS Council 119, and Kelly Robtoy, who heads the local chapter of United Electrical Workers (UE) representing contract workers at the center.

If allowed to go through, the furloughs would be “a terrible catastrophe for every worker and their families,” Welch said.

At the same time the administration is planning to furlough government workers with years of experience, the government is spending trillions to try to support families struggling as a result of COVID-19, he added.

Instead the administration should be protecting “our workers because they know we’re going to need them,” Welch said. “This is just really bad management at USCIS.”

He also highlighted the economic impact of those lost jobs. “This is a devastating blow to the economy of Vermont,” Welch said. “It’s going to be real harm to the economies of Franklin and Chittenden counties.”

Welch is sponsoring a bill to supply USCIS with emergency funding. Leahy has been pushing for months to include emergency funding for USCIS in the next COVID relief bill, which is currently being negotiated in the Senate. The House of Representatives passed a version weeks ago.

The plan, explained Welch, is to include the funding for USCIS in those negotiations.

The approach to defending the jobs is two-pronged, including both additional funding for fiscal year 2021 and requiring USCIS to use its surplus to avoid furloughs in fiscal year 2020, Welch explained.

“We cannot be furloughed,” said Spooner. “It would devastate a lot of the areas across the country.”

USCIS has 281 offices worldwide and its U.S. operations tend to be located in rural areas, she said.

Immigrants and visitors contribute to the U.S. economy, Spooner said, pointing in particular at the money spent in the U.S. by students from other countries.

Spooner, a Franklin County resident, said her doctor came to the U.S. as a child seeking asylum with her family. Her parents opened a small store, and all nine of their children attended college, according to Spooner.

“Our members are worried,” said Robtoy. “The loss of our jobs will be felt in our local and state economies.”

With so many USCIS employees potentially furloughed, it “won’t be long before contract employees will follow,” Robtoy said.

At his press conference on Tuesday, Vermont Governor Phil Scott said the state has not been able to get the information from USCIS it needs to be able to quickly process unemployment applications for the workers if they are furloughed.

Asked about it, Welch said, “I was really outraged at USCIS. Who are they not to respond to the Governor of Vermont making a request on behalf of citizens?”

The administration has also not asked for an emergency designation for USCIS, according to John Tracy of Leahy’s office.

The furloughs will devastate the five USCIS service centers around the country where visa applications and asylum requests are processed, according to Spooner.

In June, President Donald Trump issued a proclamation cancelling several visa programs for highly skilled and temporary workers until the end of the year, a move currently being challenged in court by a coalition of business groups arguing the president usurped Congressional authority. The complaint filed Tuesday in federal court in California argues “the proclamation takes a sledgehammer to the statutes Congress enacted with respect to high-skilled and temporary worker immigration.”

Spooner said USCIS has also been delaying processing of applications by constantly changing the standards used to evaluate those applications. “Every day there’s changes in policies,” she said. “Sometimes you have to hold files for months.”

Leahy has previously expressed frustration with USCIS not answering requests for information. The agency has also not been providing requested information to AFGE, as was the practice in the past.

“When you shut out the union, everything is hidden,” Spooner said, suggesting the union is essential to holding the agency accountable.

When COVID-19 began, USCIS workers were classified as essential by the administration. “If we’re essential, why is there a furlough?” Spooner asked.

WASHINGTON, D.C. – Despite reports that U.S. Citizenship and Immigration Services (USCIS) would end this fiscal year with a surplus rather tha…