You are the owner of this article.
Edit Article Add New Article
You have permission to edit this article.
Edit
Subscribe | Sign In
Home
News
Elections 2020
Sports
Classifieds
Obituaries
Editorial
Business Directory
Things to Do
About Us
e-Edition
2020 Meet Your Business Community
2020 Resource Directory
2020 Discover Guide
NEWSLETTERS

ESSEX JUNCTION — In response to a surge in COVID-19 cases across the state, the Vermont National Guard is reconstructing the Alternate Healthcare Facility at the Champlain Valley Exposition Center.

The Robert E. Miller Expo Centre will accommodate 200 beds for non-COVID-19 patients, while the adjacent Blue Ribbon Pavilion will be reserved for 50 COVID patients. The Guard has not yet been instructed to staff the site with medical personnel, but it is ready if and when the time comes, Captain Mikel R. Arcovitch said. 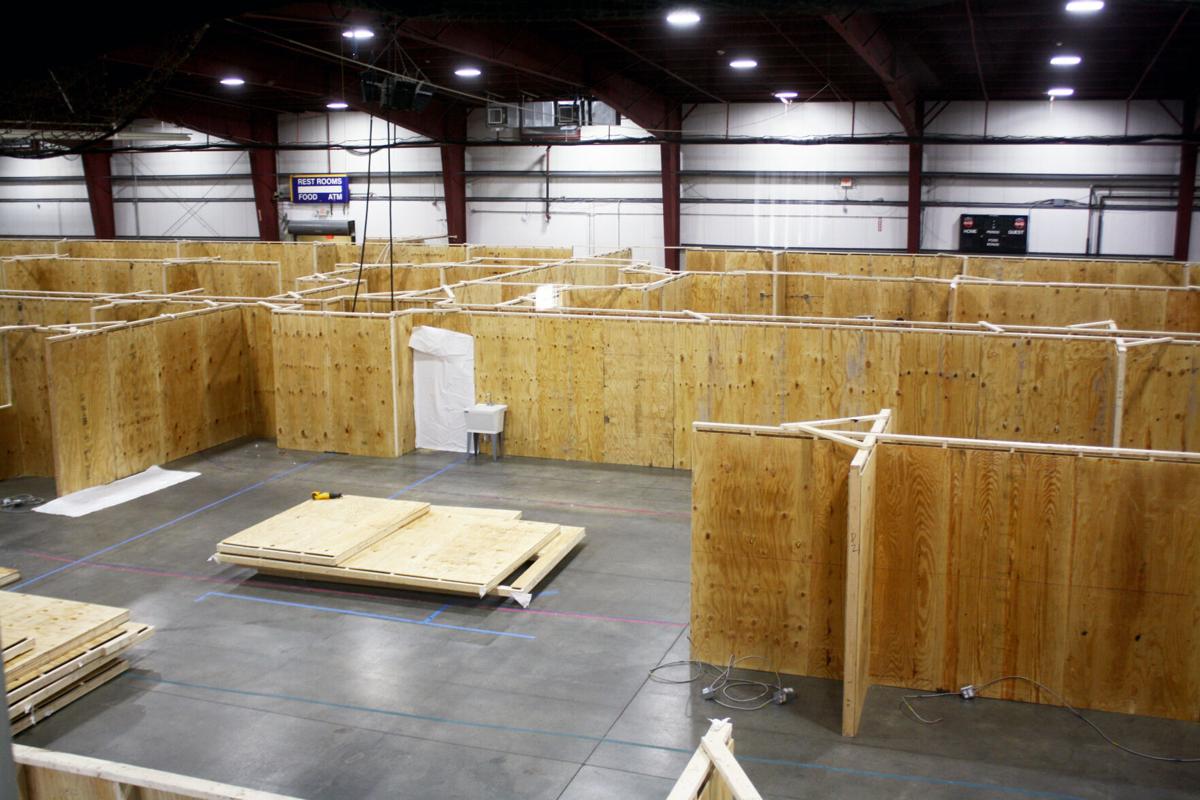 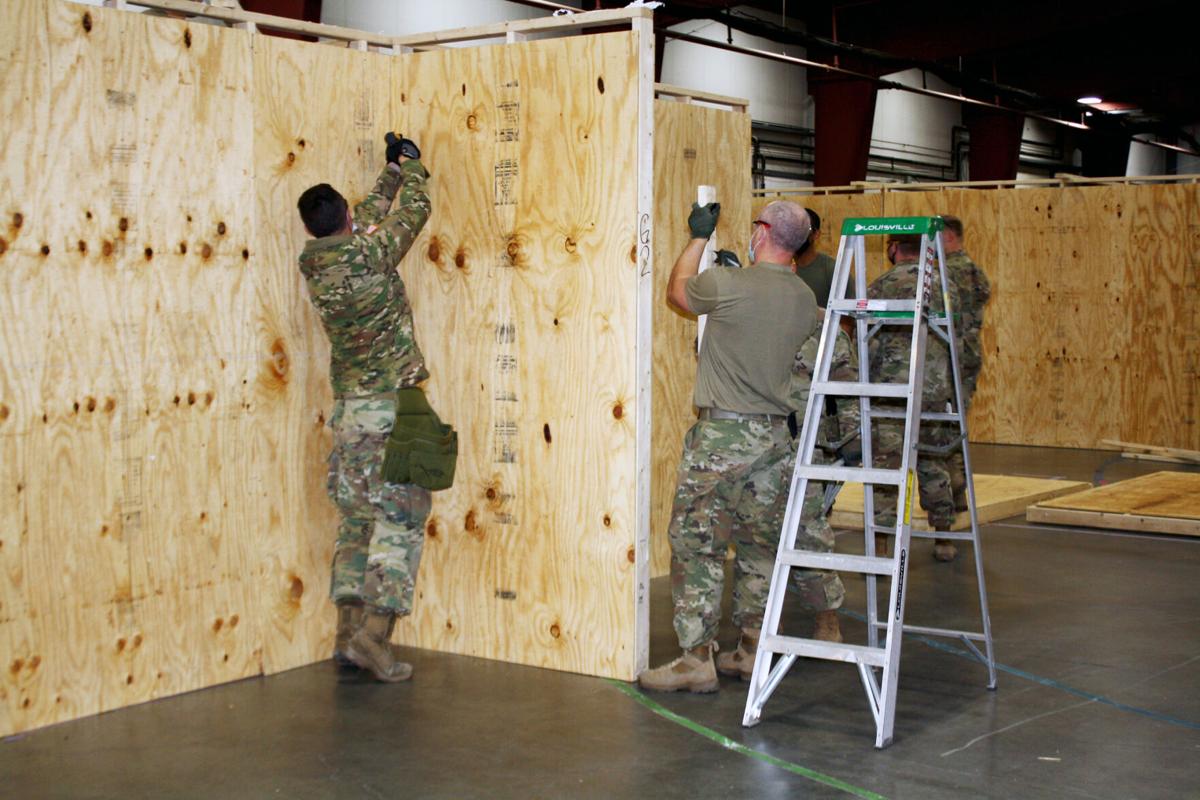 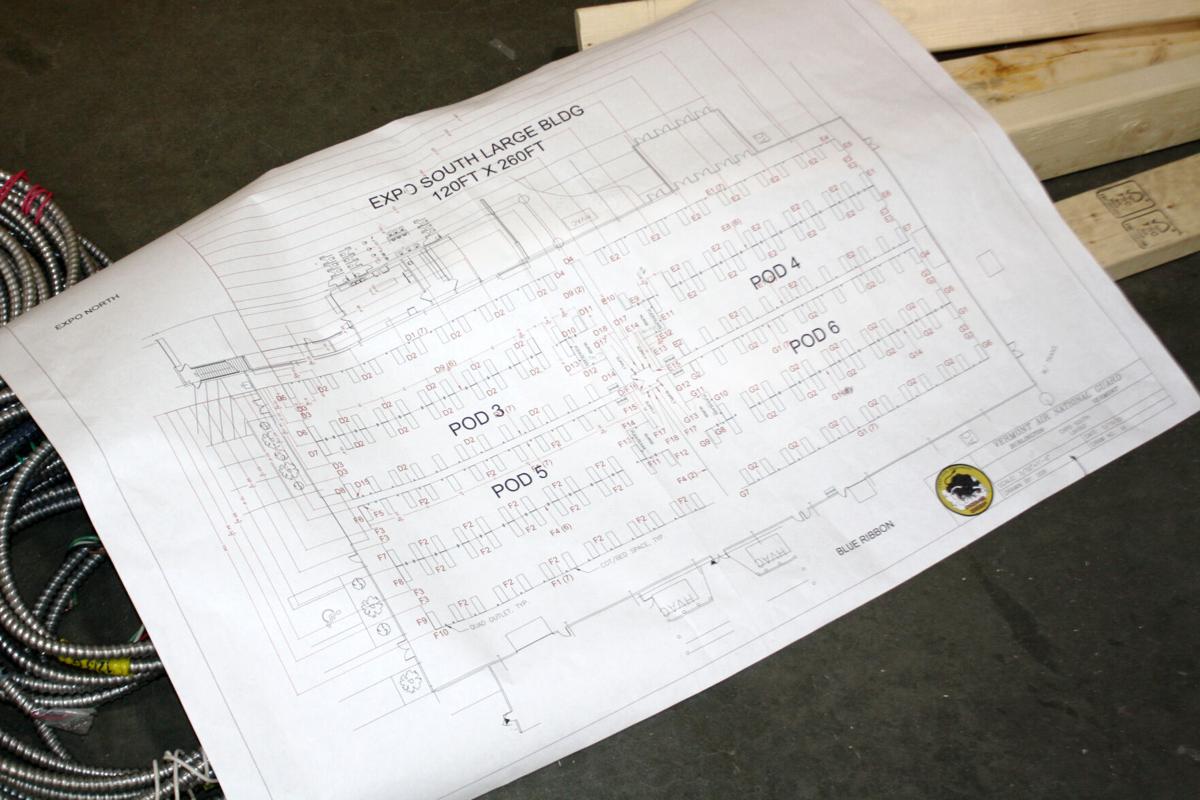 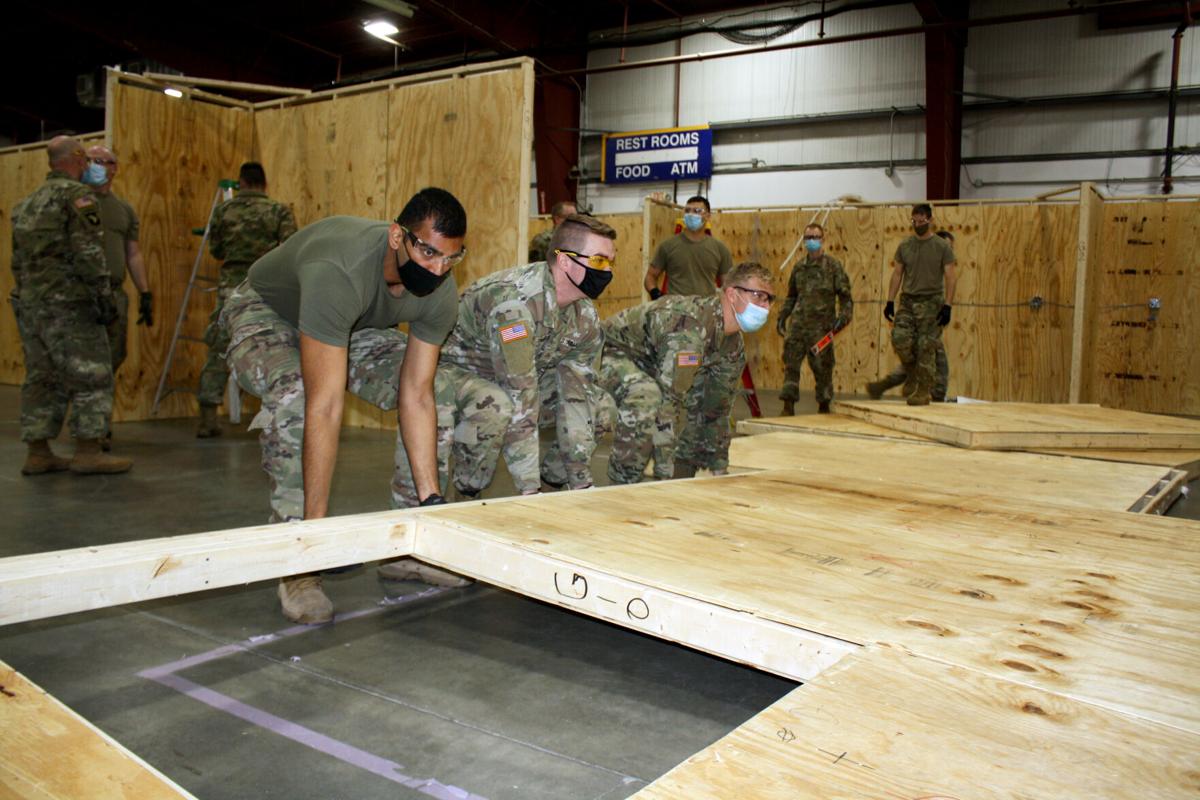 Members of the Vermont National Guard lift a wall inside the Robert E. Miller Expo Centre in Essex Junction’s Champlain Valley Exposition. For the second time this year, the Expo is becoming an Alternate Healthcare Facility. 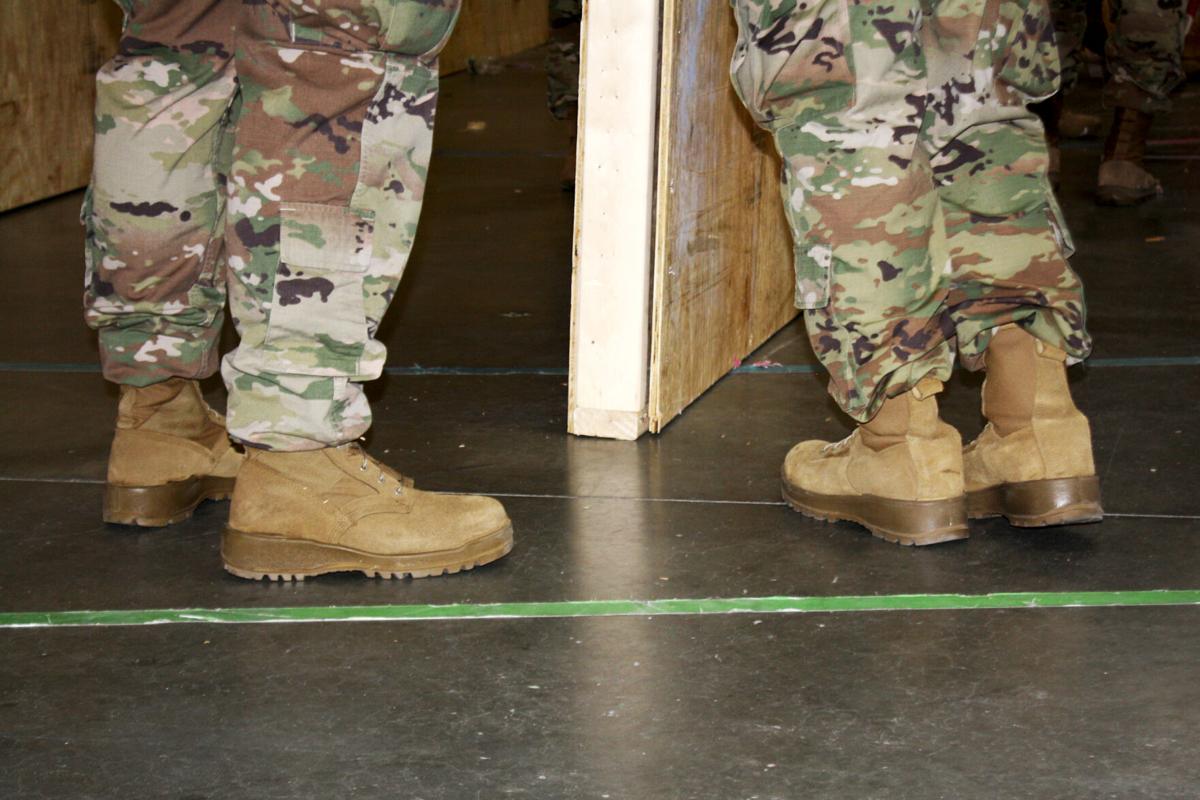 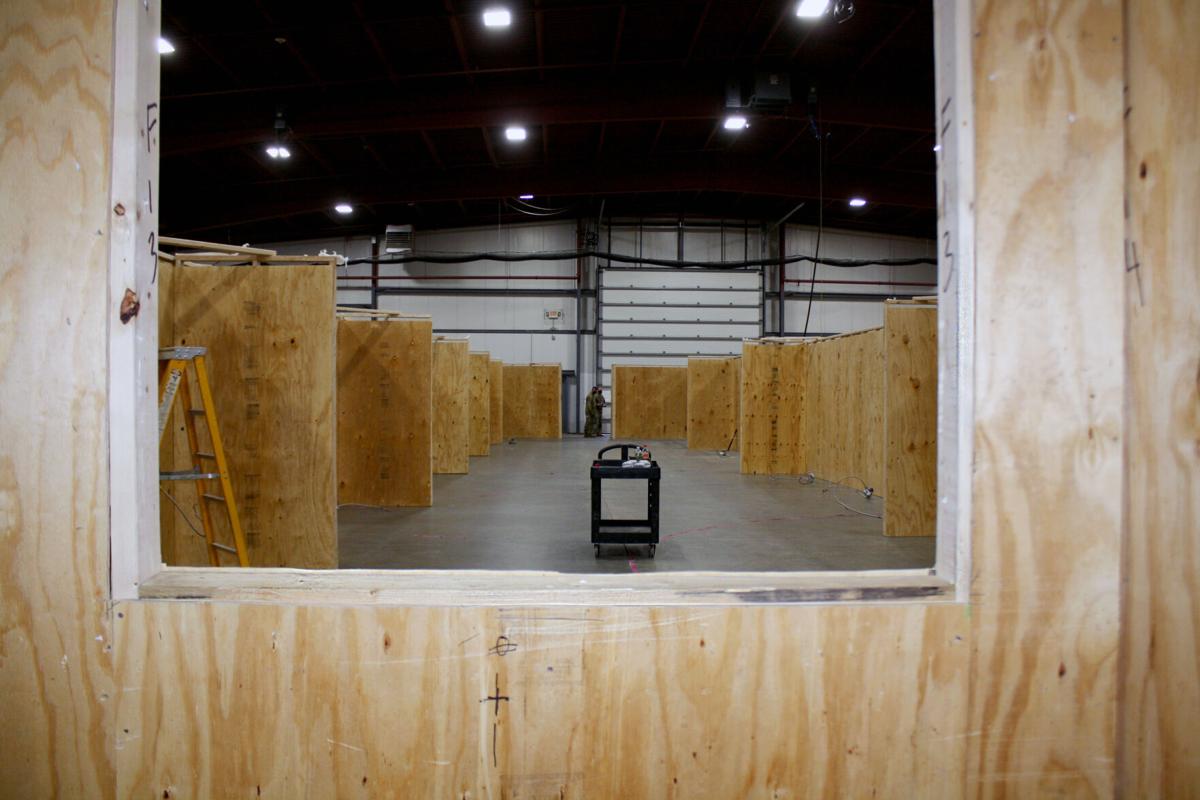 Members of the Vermont National Guard lift a wall inside the Robert E. Miller Expo Centre in Essex Junction’s Champlain Valley Exposition. For the second time this year, the Expo is becoming an Alternate Healthcare Facility.

In April, the Guard created and staffed a 400 bed facility in the same location. The site saw a total of 20 patients, seven of whom were positive for COVID-19.

The facility was disassembled less than two months later as cases in Vermont decreased.

“It feels a bit like déjà vu,” Major Mathew Lehman, the civil engineer in charge of the site, said. “I’ve walked these hallways many times before.”

This time around, the Guard is assembling the facility more efficiently — faster and with less people. While it took about 150 Guardsmen to build the site in the spring, only 35 are currently working on the project.

In May, the site was carefully deconstructed and boxed up. All of the walls, sinks, plumbing and electrical equipment were labeled and stored in a warehouse at Camp Johnson in Colchester.

“We took it apart then in a way that would make it possible to quickly put it back together,” Lehman said.

Assembly at the Expo on Tuesday was like a puzzle, with Guardsmen matching numbered wall markings to those on the floor. This process, as well as the fact that many of the 35 Guardsmen working on the site now helped assemble it in the spring, has made it easier.

“The thing about using the Guard is that I’ve got software engineers, sanitary engineers, musicians — a lot of different people here, and as long as you can follow the directions, you can put it together,” Lehman said.

By the end of the day on Sunday, the Robert E. Miller Expo Centre will be filled with hallways made of plywood and two-by-fours. Each pod will be wired with electricity and hooked up to plumbing for nurses’ stations and showers.