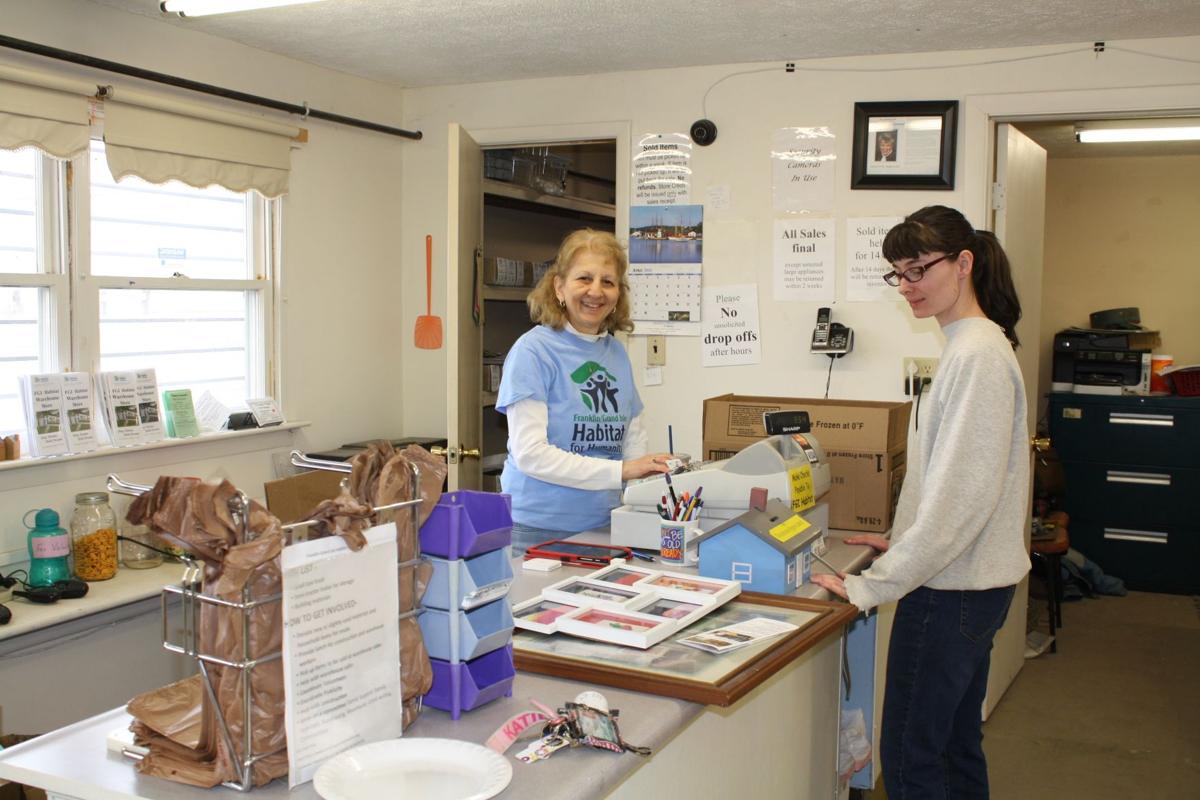 JoAnn Brodeur mans the cash register at the Franklin Grand Isle Habitat for Humanity’s warehouse during a Thursday volunteer workday. 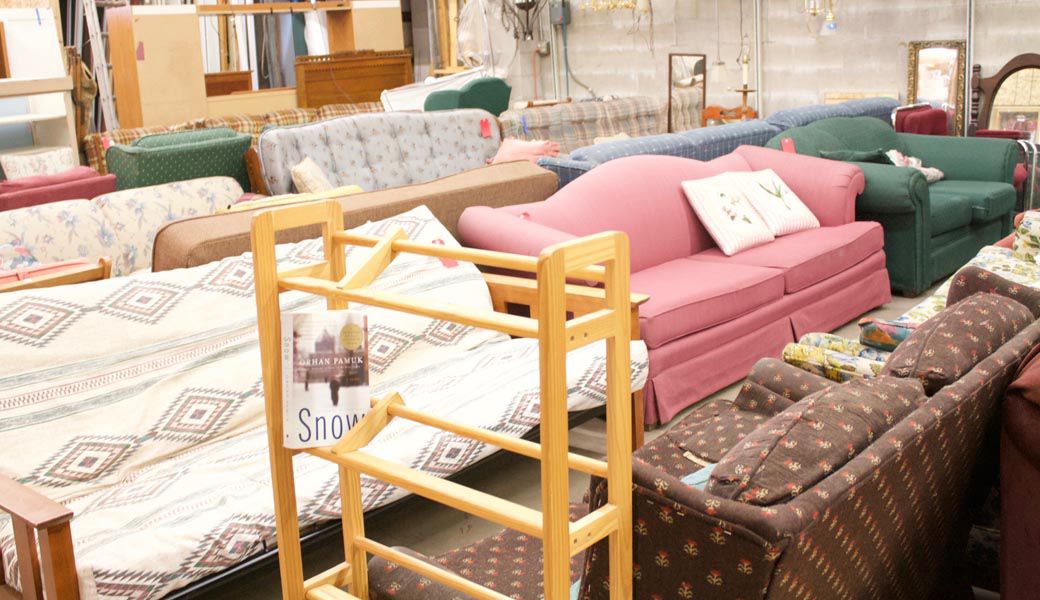 Donated furniture is among the items for sale at the Habitat for Humanity warehouse in Highgate.

JoAnn Brodeur mans the cash register at the Franklin Grand Isle Habitat for Humanity’s warehouse during a Thursday volunteer workday.

Donated furniture is among the items for sale at the Habitat for Humanity warehouse in Highgate.

HIGHGATE — Hidden along a bumpy road, lodged next to the Franklin County State Airport, is an old warehouse that may not look like much from the outside. But inside is a mine of hidden treasures that hold a dual purpose – bringing delight to their discoverers while funding the mission of the Franklin Grand Isle Habitat for Humanity.

Set apart from other chapters, this Habitat for Humanity is powered 100 percent by volunteers.

From warehouse workers to house builders, more than 70 people donate their time and hard work to help families in need move into a house they may never have had the financial ability to own. The means to make all this happen begins at the warehouse.

Donated to the chapter in 2005 by A.N. Deringer, the warehouse was originally used for storage purposes. But after receiving so much community support from donations, the chapter decided to open it up as a store.

Now, the two-story warehouse is the chapter’s primary source of money.

“We probably get six box truck loads a week of stuff,” said board member JoAnn Brodeur. “Iit’s a win-win-win situation for everyone. The person that donates the stuff gets a tax receipt, the people that buy it here get a really great deal and one of the big things to me is that it doesn’t end up in a landfill.”

Deals aren’t the only treasures hidden within the warehouse. Unique to its location, and buried within a freezer, is famed barbecue ribs and pulled pork, sold by the case.

Brodeur says this idea, not only unique to the Franklin Grand Isle chapter, has provided a great deal of income and another driver that keeps traffic coming into their warehouse.

“We began the sales in 2010, and it was so popular we just continued. At first we sold at a lot  at farmers markets to get the word out, but now we don’t even go anywhere, people just come in and buy them,” Brodeur said, “And all the funds we raise go to build houses, that’s always our goal.”

Throughout it’s 15-year history, the chapter has built eight houses in the area and is now getting the plans ready for its ninth home, which will be built on Huntington Street in St. Albans.

David MacCallum, who serves as executive director of the chapter, was one of its founders.

“There was a group around the year 2000 that tried to get the chapter going. They sort of spun their wheels, but the plan didn’t go anywhere. Then one of the original gals contacted me, and said David we got to get this going. So we got a group together and started organizing, and the rest was history,” MacCallum said.

In 2003, the group became an official chapter of Green Mountain Habitat for Humanity. Since then they’ve built houses in Swanton, Alburgh, Enosburg and St. Albans, giving each of these families a place to call home.

“We target families that would like to own a home, but just can’t get a loan anywhere else because their income is too low,” Brodeur said.

Each family is selected by the Family Selection Committee based on need, willingness to partner with Habitat for Humanity, and their ability to pay. The selected family then receives a zero percent interest mortgage on their new home.

The family is required to volunteer throughout the building process for at least 500 hours.

“We want the families to feel like their participating in the process and give them a pride of ownership,” MacCallum said.

To volunteer, you don’t need to be a building expert, a design connoisseur, or even handy at all.

“Part of Habitat’s goals is to teach,” Brodeur explained.

When people show up with willingness to work, but a lack of any of the necessary knowledge, they aren’t turned away. Instead they’re shown some valuable skills, all while making a difference.

“One of the houses that we built, we had a woman who kept saying, ‘I can’t do anything.’ So when we were building the home’s stairs down into the basement, I showed her how and not long after that, she installed her own doors onto the kitchen’s island,” MacCallum said.

But for some, home building isn’t their niche. With Habitat for Humanity, that’s okay. There are still other ways to serve.

Loraine Scott has volunteered for seven years with Habitat for Humanity. Her niche? The upstairs part of the warehouse.

Twenty hours of the week, Scott can be found donating her time to organizing records, books, toys, dish and kitchenware and any other kind of an odd and end you can think of. A longtime, faithful volunteer, who loves her work and the fellowship.

“We have pretty much the same crew every week, it’s a community,” Scott said.

If you are interested in becoming a part of Habitat for Humanity’s mission, you could help kick-start a huge project by getting involved right now. Though the chapter has secured the land for its next home, the construction has been put on a stand still.

“We can’t start until we find someone that can head up the building site,” Brodeur said.

Along with a lead construction supervisor, the chapter is in need of day supervisors to manage the construction site. If the manpower is found, the goal is to begin building this summer. Interested volunteers can contact MacCallum at (802)-524-3501 or email executivedirector@franklingrandislehabitat.org.

Perhaps you want to help, but aren’t a building expert. You can volunteer in the warehouse on Thursdays for workdays, or stop by and shop on Saturdays from 8 a.m. to 3 p.m.

Although it was closed for the winter, the shop reopened its doors the first weekend of April and business has been steady.

“Our first Saturday, we had two register operators, two people bagging and boxing, and there was still a line out the door,” Brodeur said. “It’s just amazing what happens here, and people love it.”

Nearly 300 sales were made that day, just the first in a long season ahead.