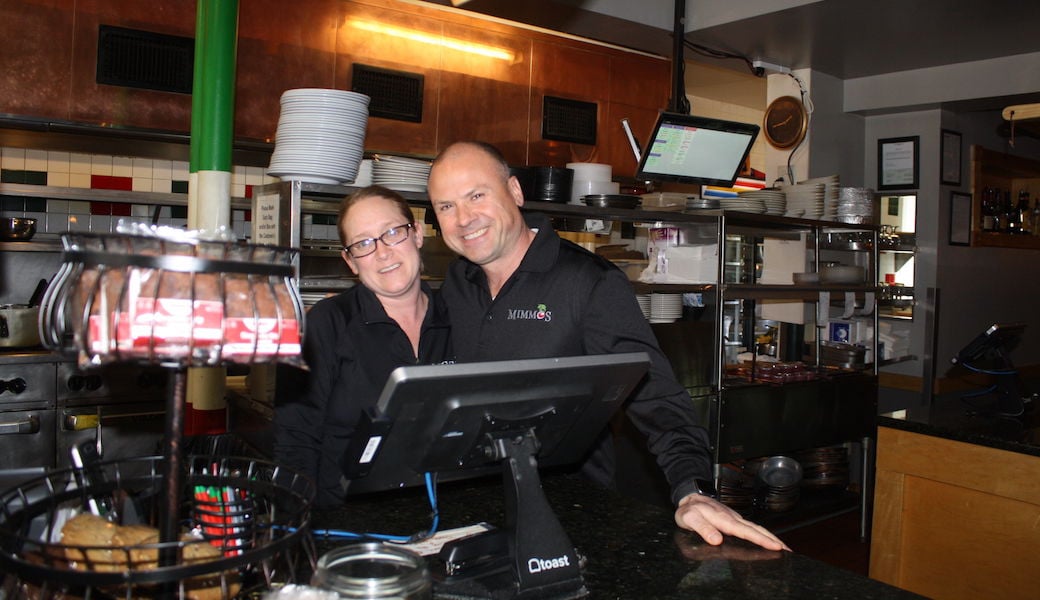 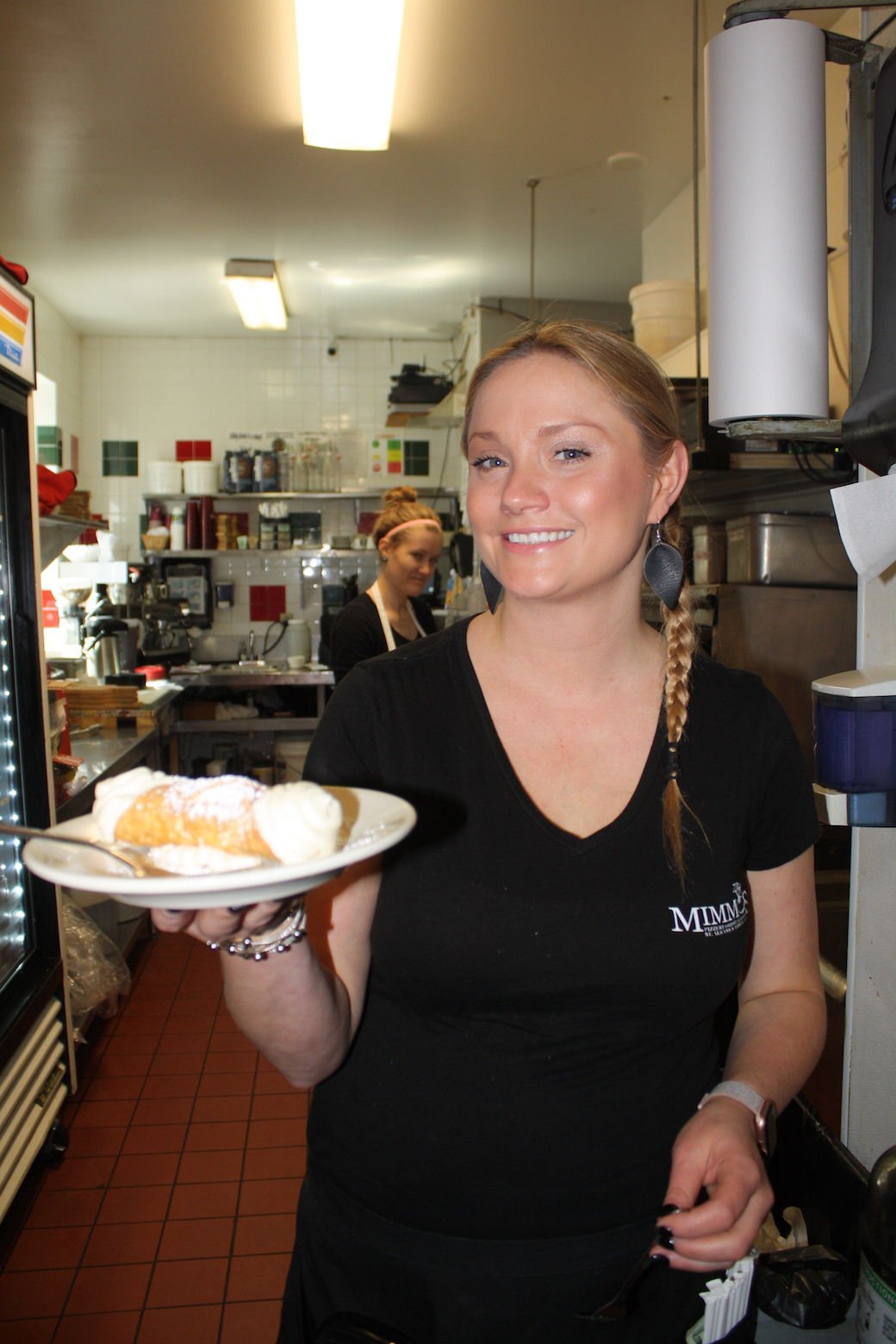 Crystal Lafferty displays a cannoli she is about to deliver to a customer at Mimmo’s on Wednesday. Lafferty has worked at the restaurant for about 11 years. “I love it. I love my job. I love my customers,” she said. (Michelle Monroe, MESSENGER STAFF) 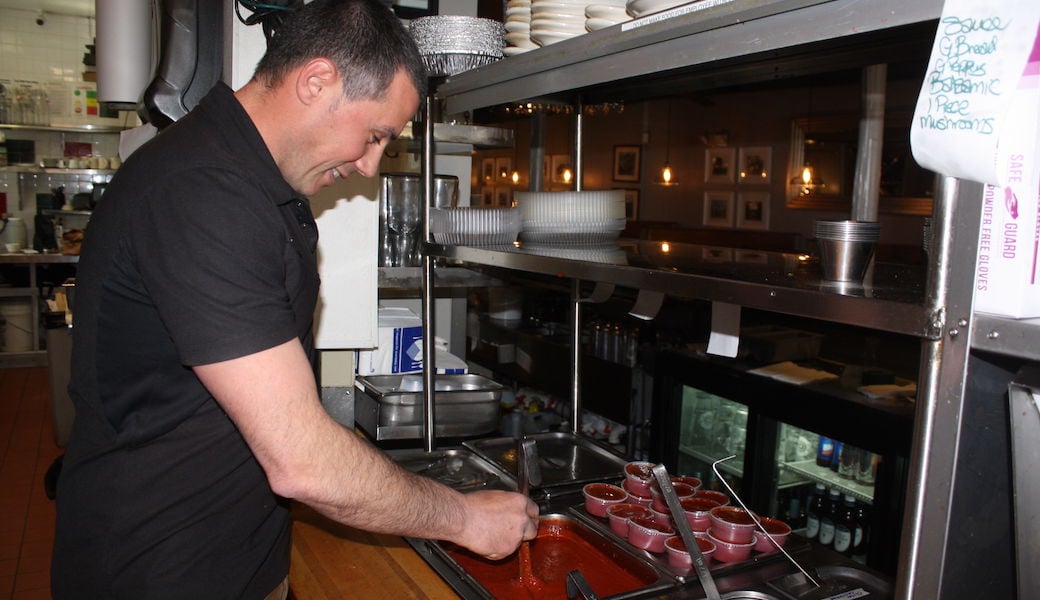 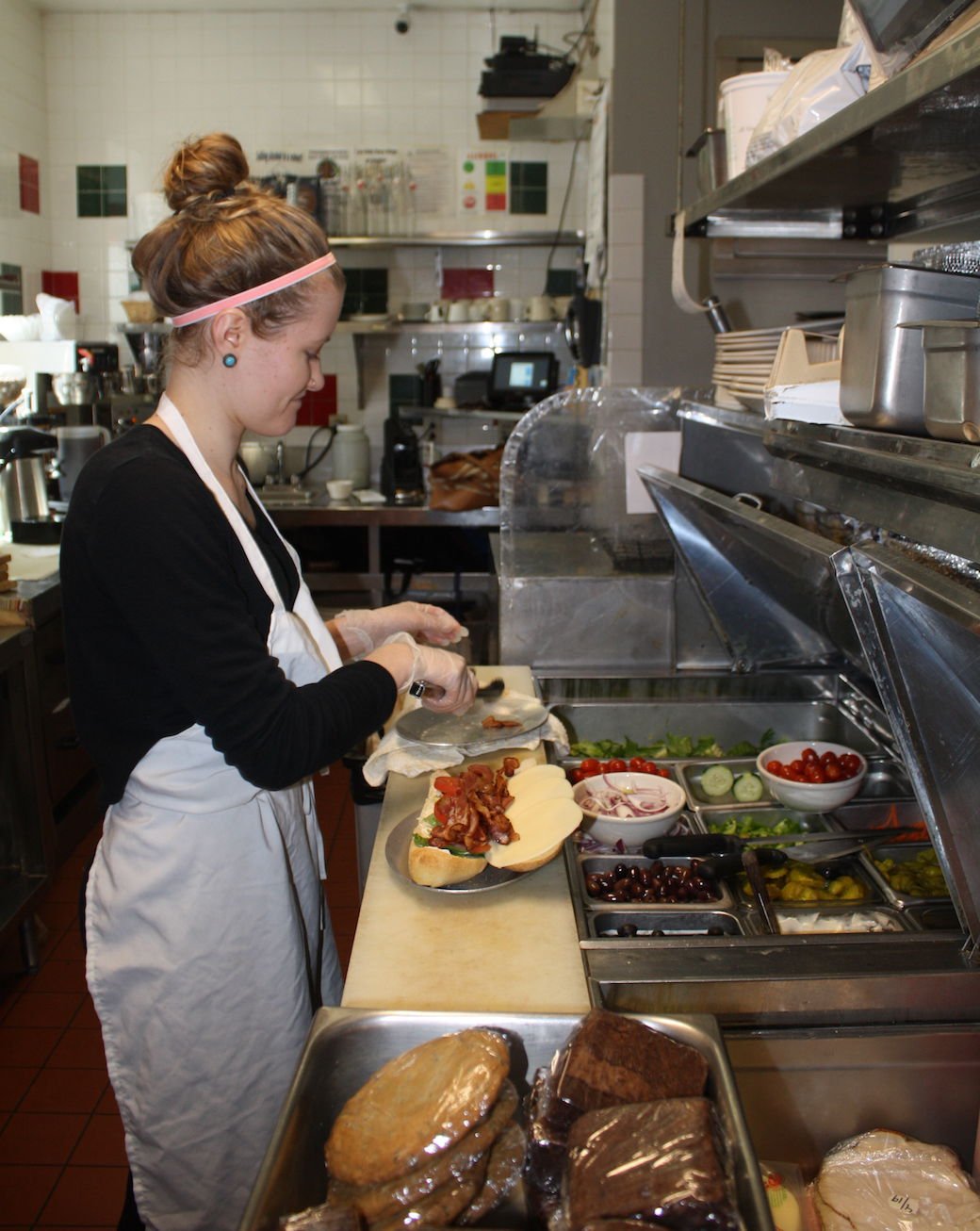 Crystal Lafferty displays a cannoli she is about to deliver to a customer at Mimmo’s on Wednesday. Lafferty has worked at the restaurant for about 11 years. “I love it. I love my job. I love my customers,” she said. (Michelle Monroe, MESSENGER STAFF)

ST. ALBANS — Mimmo’s Pizzeria and Restaurant is a family business in more ways than one.

Owner Dominic “Mimmo” Spano has brought several family members into the business, including his youngest brother, Carlo, who manages the restaurant here in St. Albans. Two brothers also operate the Mimmo’s in Essex.

Mimmo’s brother-in-law met his wife while both worked at the restaurant, leading Mimmo to compare his restaurant to the “love boat.”

But even those employees who aren’t directly related to the owner, consider the restaurant family.

Sarah Mayo, who has worked at the restaurant for 19 years, said of her boss, “He’s been like a second dad to me. He’s just a a really genuine person who cares about you.”

Carlo agreed, saying working side-by-side in the restaurant “creates something like a family. Everybody takes care of each other.”

Mimmo is the oldest of the six Spano siblings, who grew up on a farm in Southern Italy. Carlo is the youngest.

A brother and sister remain in Italy raising olives, almonds, and, Carlo said, “the best cherries,” on the ancestral farm, along with their own spouses and children.

Almonds from that area of Italy are like maple syrup in Vermont, Carlo said, the best.

Carlo came to the states in late 2006 to work with his brother after spending five and a half years in the Italian army.

He came armed with culinary skills learned in the family kitchen, where everyone is involved in cooking the family’s meals, he said. “From the region where we come, it’s a passion. We know the simple food is best.”

Carlo lives in Fairfax with his wife, who is French Canadian and also grew up on a farm, and their three children aged 18 months to four and a half years. A fourth is on the way.

“We have a huge garden, so the kids are always busy,” Carlo said.

Vermont has become home. When traveling to places such as Boston or New York City, Carlo said, “I want to go home. I want to go back to Vermont.”

Mimmo came to the states when he was 14. He worked in pizzerias on Long Island because workers there spoke Italian and Mimmo didn’t speak English.

“I was poor and hungry and I ate a lot of free pizza,” he said.

“I dreamed of a restaurant since I was 19,” Mimmo added. He was accustomed to looking at city streets in search of possible restaurant locations.

He came to St. Albans to get his green card from what was then U.S. Immigration and Naturalization Services. “St. Albans had a lot of great things. I fell in love with it here.”

That was nearly 25 years ago, and the business hasn’t stopped changing and growing. For instance, both locations accept orders online and St. Albans will soon add evening delivery to its current lunchtime delivery schedule.

It’s all part of giving customers the best experience possible.

A focus on quality ingredients and maintaining the quality of the food, regardless of how busy the restaurant is, is another piece of that customer service. “We want customers to get exactly what they thought they would,” said Mimmo. Every order is made to order, not prepared in advance and reheated.

Mimmo has also added menu items to appeal to children or those avoiding meat, carbs or gluten. “We try to include the whole family.”

“Our food is made traditionally,” he said.

The flour for the bread and pizza dough comes from King Arthur Flour, here in Vermont. The mozzarella from a U.S. company named Italian Family. “It has to be someone I trust and the quality has to meet my standards,” Mimmo said of his suppliers.

Asked what is the most challenging part of making a pizza, Mimmo said it is spreading the sauce, cheese and ingredients. “Every bite needs to be an explosion of flavor. That’s the challenge.”

And the dough has to be spread to the right thickness. “If the dough is too thin, the pizza won’t be as good as it should be,” Mimmo said.

“It’s not a hard skill to learn, but you need to have passion for the job to do it well.”

The restaurant’s signature marinara is also made fresh on site, with carefully chosen ingredients. Not all of the basil arriving with the 5 a.m. delivery will make it into the sauce. Staff often find a “leaf that’s just okay for pesto, but that’s not okay for the marinara.”

Mimmo added that a basil leaf for the sauce must by green, crispy and have “a little life to it.”

The ranch dressing used in the restaurant’s most popular pizza – buffalo chicken – is also made on site.

Both the marinara and the ranch are available for sale directly to the public at the restaurant. Mayo had sold six cups of the ranch to a customer who bought nothing else just before the Messenger’s visit this week.

Mimmo says his love of food came from his mother. “I worked as a butcher as a kid so I was fanatical about good food.”

He eats a lot vegetables, with a salad or steamed vegetables for lunch and more vegetables with pizza, pasta or bread roll. He’s also a big believer in not eating if you aren’t hungry. “We’re supposed to have hunger before we eat,” Mimmo said. “It requires three to four hours of fasting between meals.”

Asked what he knows now that he wishes he’d known 25 years ago when he opened Mimmo’s, he answered, “I would’ve been less concerned about making mistakes.”

He would’ve taken more risks and been less of a perfectionist, Mimmo said. “But if I didn’t live my life the way I did, I wouldn’t be the person I am.”

The journey has clearly turned out well for him. “We are fortunate we are a well-established business. We are able to take care of our employees, pay our bills and give back to the community,” said Mimmo.