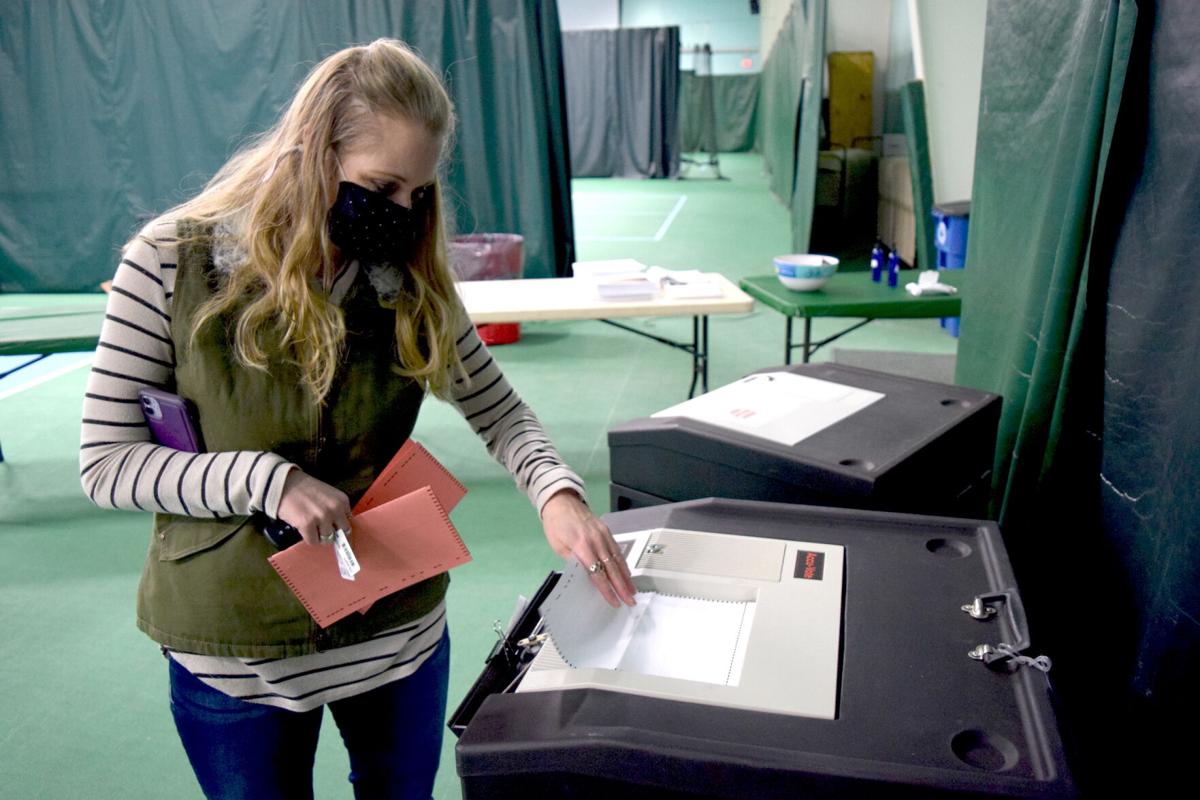 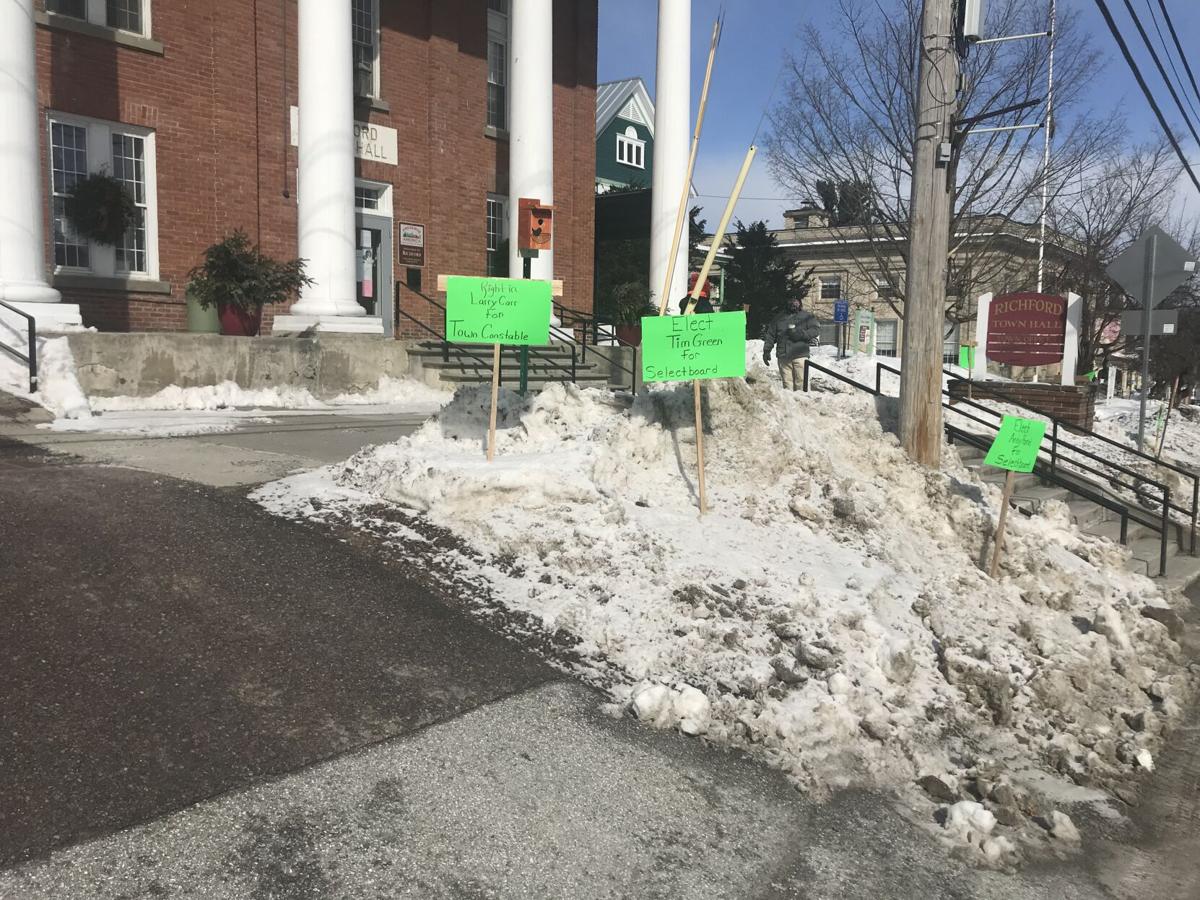 Voting in Richford is taking place at the town hall. Candidate signs can be seen in the foreground. 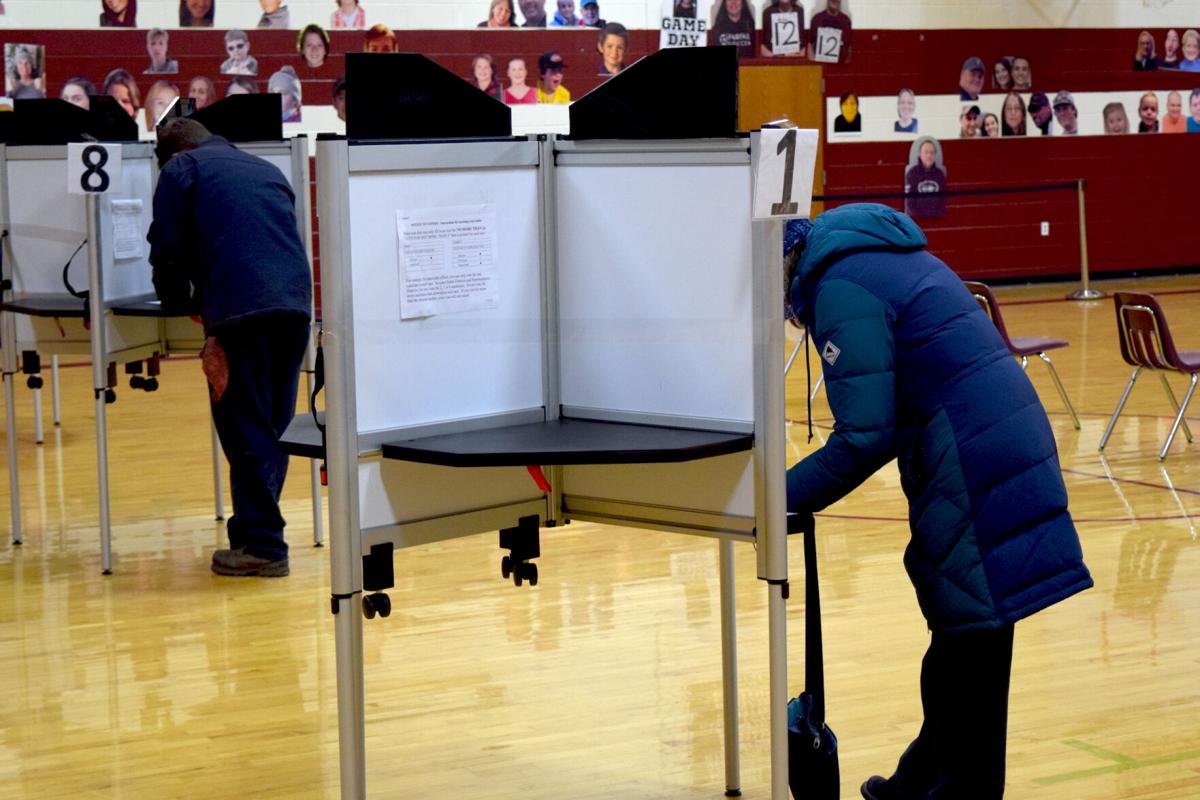 Voters in Fairfax fill out their ballots at the BFA Fairfax gymnasium during Town Meeting Day on Tuesday, March 2.

Voting in Richford is taking place at the town hall. Candidate signs can be seen in the foreground.

Voters in Fairfax fill out their ballots at the BFA Fairfax gymnasium during Town Meeting Day on Tuesday, March 2.

Check back for more results as they come in

St. Albans Town will be looking at a new town hall down the road after voters Tuesday approved funding the project on Town Meeting Day.

“It’s a major part of our plan to revitalize St. Albans Bay,” Deso said during an interview on Northwest Access TV.

All other articles in the town passed. The budget passed by a margin of 1,125-708. Voters also approved using $250,000 from the prior year’s general fund balance to offset taxes this year.

Article 7, which would allow retail cannabis operations in Richford, was voted down 185-147, and was the only article voted down on Town Meeting Day.

All other articles, including appropriations and a $2.6 million budget, were approved.

In a three-way race for a two-year seat on the selectboard, Andrew Pond won out with 182 votes against Alan Fletcher’s 102 and Jacques Desautels’ 39. There were no other contested races.

Voters in Fairfield approved all articles — 2 through 11 — on Town Meeting Day, according to Town Clerk Linda Hodet.

Voters approved all articles except the school budget, which failed 495-662.

Tony Heinlein won a four-year seat on the Planning Commission while Emily Johnson and Eric Strong each won single-year terms.

Bernie Pion won a seat on the Georgia Industrial Development Corporation board.

Carl Laroe won a three-year term on the school board, with Ben Chiappinelli winning a one-year term.

Voters in Montgomery chose overwhelmingly to support the retail sale of cannabis in the town with 60% of the vote — 244 to 144.

However, the most contentious issue at Monday’s town information meeting — the direction to amend the towns all-terrain vehicle ordinance to add the usage of ATVs on town roads — failed to gain a plurality: 175 chose to approve and 196 opposed.

Also, going to Montgomery to have a drink might cost a few more pennies from here on out considering the approval of a 1% local option tax but not an additional tax on assessed property values. These funds will go to to the repayment of debt obligations.

Of note, all the candidates named on the ballot won their respective races.

The voters of the town of Fairfax not only approved the security of the services of the Fairfax Rescue squad, but by a narrow margin voted to approve $10,000 for an audit of Fairfax Rescue Squad’s financial data in a vote of 493 to 343.

Fairfax Rescue Squad’s services were approved in a vote of 697 in favor and only 141 against, and approved the sum of $23,777 funds to support social contributions to the town.

Voters chose to approve the $14,636,092 school budget by 504 votes in favor and 357 against, and to authorize school directors to borrow money in anticipation of revenue for the ensuing year by a vote of 544 versus 318 against.

Voters of Swanton Village approved this year’s general fund budget of $151,242 in a vote of 215 in favor and 29 against. Similarly, 218 voted in favor to the Highway Fund budget with only 29 against.

Neal Speer was voted village president with a majority vote of 223 out of 247 votes, and Dianne Day secured her year-long seat as town clerk with 235 of 247 votes.

Betty Cheney won the one-year seat for collector of delinquent taxes with 236 votes, and Chris Leach will be a Village Trustee for the next three years after securing 215 votes.

All warrant articles in Swanton passed, including an $868,269 highway budget and $294,605 general expenses budget.

The voters of the City of St. Albans approved the proposed $9 million budget this year in a vote of 608 to 211, and the city is officially getting a brand new pool, a new water tower and a revitalized Kingman Street after those bond issues passed.

Voters approved the pool by just over 200 votes: 516 voted in favor of the bonds needed to build it and 308 voted against.

Chad Spooner will fill the council position for Ward 6 with 59 votes and both Linda Lang and Sue B. Wade will serve as St. Albans Free Library Trustees — Lang received 699 votes Wade received 717.

Bakersfield residents only voted down one article on Town Meeting Day. Article 4, which would have authorized the selectboard to appoint the town clerk, rather than it being an elected position, was voted down.

All other funding appropriations, including a $265,000 general expenses budget, were approved. There were no contested elections.

The use of ATVs on town highways was approved by Sheldon voters on Tuesday, 123-78. Residents also voted to approve the designation of town-owned land located on Sweet Hollow Road as Sheldon Town Forest, by a margin of 171-30.

Those and all other warrant articles were approved, including a $1.4 million town budget and $17.7 million school district budget. There were no contested races in the town.

In two highly contested races for positions on the Maple Run Unified School District Board, a father and daughter won out.

Peter Deslauriers won a seat representing the city with 1,711 votes, beating out incumbent Nilda Gonnella French with 1,538 votes and Reier Erickson with 918. French retains her original seat on the board.

There were no contested elections on the ballot.

Sam Gervais won the only contested race in Franklin on Town Meeting Day, beating out Bryce Bachelder by a narrow margin of 163-157 for a three-year term on the selectboard.

All other warrant articles passed, including the $358,207 general fund budget and $437,889 highway fund budget.

Town Meeting Day in Highgate saw every warrant article approved, including $888,128 for the town highway fund, $1.1 million for the general fund and $411,000 for the capital improvement plan.

There were no contested town races.