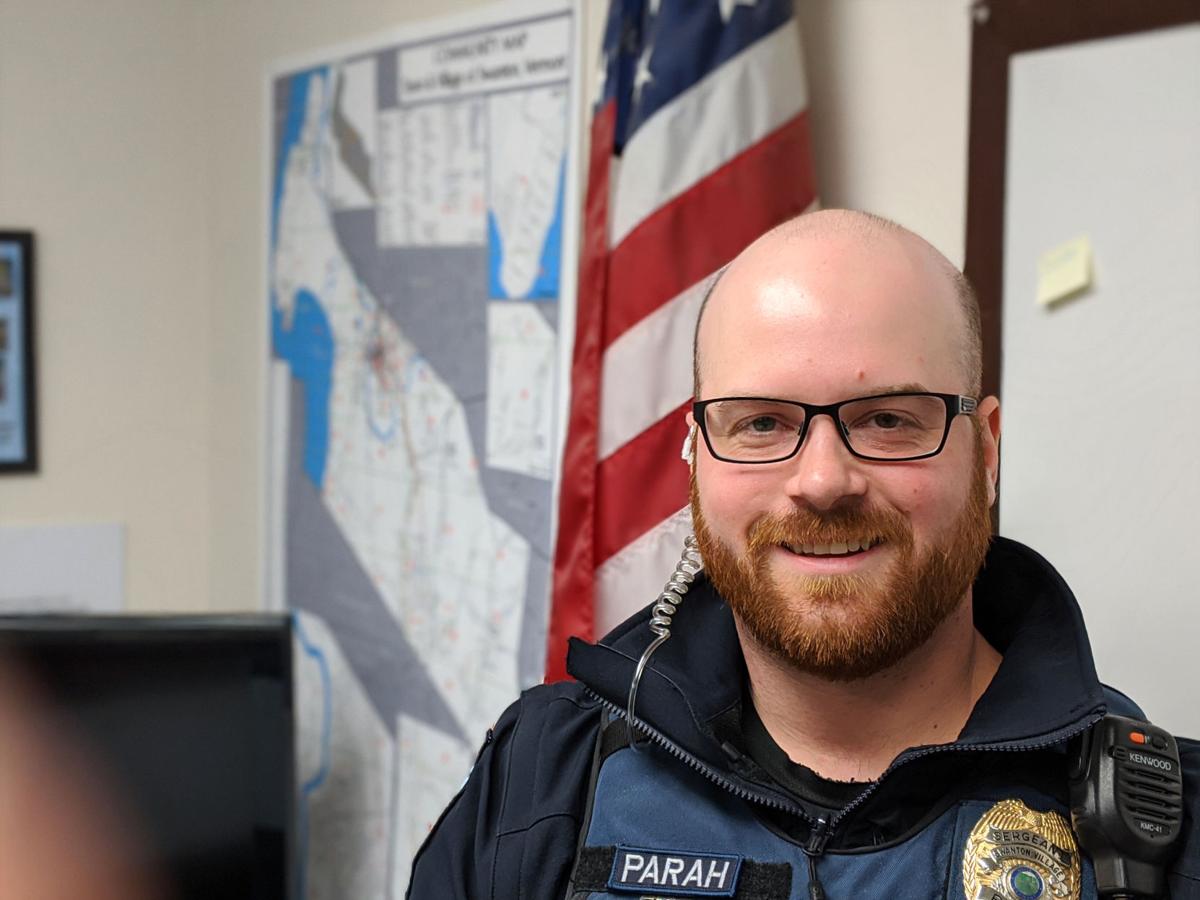 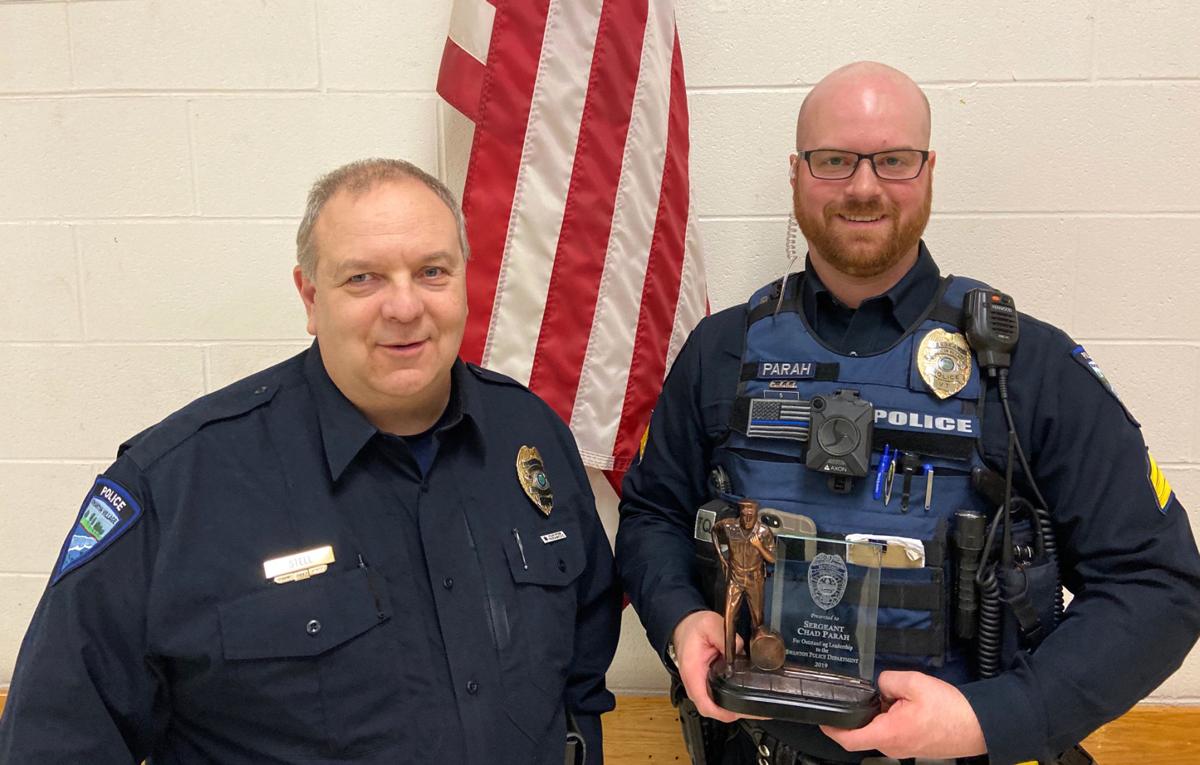 SWANTON — From the age of five, Chad Parah knew who he wanted to be: a police officer.

SVPD Chief Joey Stell presented Parah with the award after the village board of trustees’ Dec. 23 meeting. Stell told the Messenger Tuesday night that Parah has been an outstanding officer throughout Parah’s roughly decade-long career with the SVPD, but said Parah has “really stepped up and embraced” his leadership role since his promotion to sergeant.

“He takes his time to make sure all the officers are ... getting their work done and assisting them as a mentor in any way, shape or form that he can,” Stell said. Stell said the award recognizes “the outstanding leadership that [Parah has] brought to the department in his ability to motivate the officers to get what is needed of them done during the evening hours.”

The chief said the key to Parah’s leadership is that he leads by example.

“He goes forward with, not telling guys what to do, necessarily, but showing them what to do and doing it himself,” Stell said.

The Messenger spoke with Parah separately, prior to speaking with the chief. But Parah said essentially the same thing: he would never make an officer perform an action he himself would not do.

Parah said he sees his role as, largely, that of a mentor. That’s how he saw SVPD Lt. Leon Begnoche, who he credits as a major inspiration in Parah’s life.

“He made sure he took care of the people that worked for him,” Parah said. “If you had a question, he didn’t mind answering it, any time of the night, you could call him and ask him a question.”

Parah grew up in Swanton, the son of Kevin and Anita. He remembered his dad, a local taxidermist, doing work for several police officers, like Begnoche.

“I remember Leon, as a young kid, seeing him and relating to, you know, that’s what I want to do.”

Then there was Thomas Jakes, a local state trooper partnered with a K9 officer named Caesar.

“He would bring the dog over to our house when I was a young kid,” Parah remembered, “and we would play with the K9. I was young at this point, and that was something I was drawn to.”

By high school, Parah knew he was going to be a cop. But he said he’d wanted to be just that since he was five years old.

Why? “I think every kid, when they’re young, wants to be a police officer,” Parah said. For him, the core piece in being one seemed to be “helping out other people and serving the community,” and that didn’t change.

Parah graduated from the Vermont Police Academy in Pittsford in 2010 and joined the SVPD shortly after, following part-time work with the Franklin County Sheriff’s Office.

It’s probably clear he intended to come back to Franklin County, specifically Swanton.

“I didn’t want to work for a big agency,” Parah said. “I lived here my whole life. I enjoyed the small-town atmosphere of Swanton.

That seems to benefit his work as a police officer. Parah said people seem to feel comfortable approaching him “because they see me as probably not just a badge and a police officer here, but as a person in the community. And I feel like you can get to a different level with people because of that.”

So Parah’s interest in helping people and serving the community doesn’t seem to have changed, even if he acknowledges the realities of modern day daily police work are challenging.

A large part of that, according to Parah, is increased scrutiny from the media and, subsequently, the public, following nationally reported allegations of officer misconduct. Parah said that makes a hard climate for officers who, here in Swanton, “are just following procedure and training ... It’s always something different, and we all strive to do a good job when we’re out there.”

But despite Parah’s perception of the national climate, he said morale is good within the SVPD.

That seems to be in part due to the department’s results. Parah used the Jewett Street recreation fields as his example. The Messenger previously reported complaints of drug-related activity, not just reports of suspicious persons after dark but also the discovery of needles and related drug paraphernalia — and also reported that the number of those incidences has radically dropped since the SVPD began concentrated patrols at the rec fields.

“I know that when we go out at night, we very rarely see anyone in the back parking lot or on the fields,” Parah said, “and the issues that were being reported to us, we’re not hearing any more about garbage and needles down in the dugouts, and graffiti and stuff like that.”

But morale among the officers themselves seems high, too, according to Parah. The department is fully staffed with low turnover.

“In the last nine years, we’ve been always fully staffed,” Parah said, “and if we do lose someone, we can usually recruit someone pretty quickly.”

And that’s not just thanks to the SVPD, Parah said, but to the village government in general.

“The village, as a whole, is like a family,” he said. The various departments housed in the municipal complex — the SVPD, as well as the fire, electrical and public works departments — work together and spend personal time together, too, for example regular lunchtime barbecues in garage out back during the summer.

“It’s that type of atmosphere that we have here,” he said.

The SVPD is also a regular participant in community events like the annual Swanton Arts Spectacular. Last year, Parah put together a booth where local kids could color on police department patches. Parah said that was “a great way to meet-and-greet the public, and for children to have a positive interaction with police officers.”

Despite his role in the SVPD’s continued success, Parah said he was surprised to receive the leadership award. And even though his childhood dream job has its share of daily difficulties, he said he’s still happy, it’s still what he wants to do.

The best times for him, he said, are “times that you did something and affected someone in a positive way and [think], you know, ‘I made their life better.’”