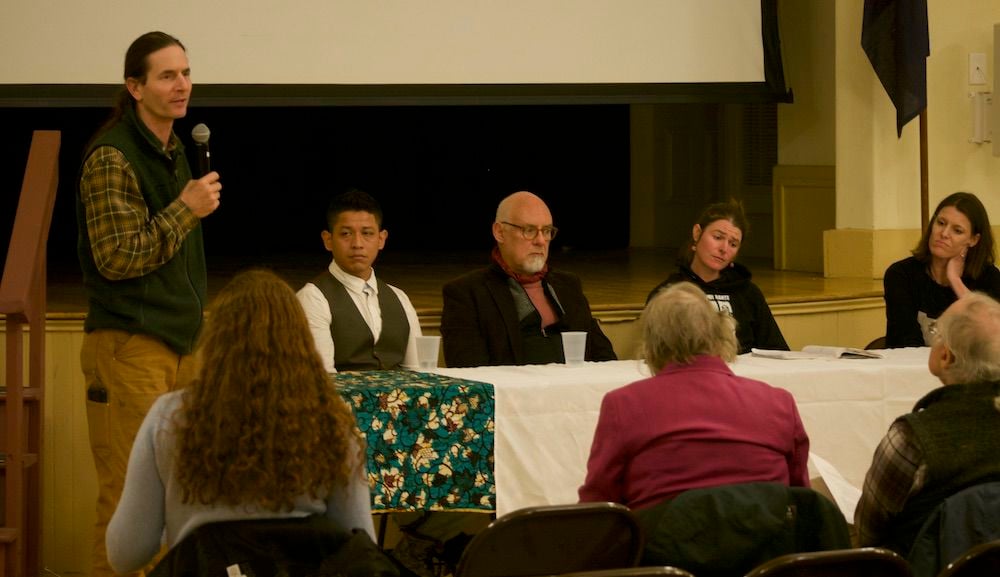 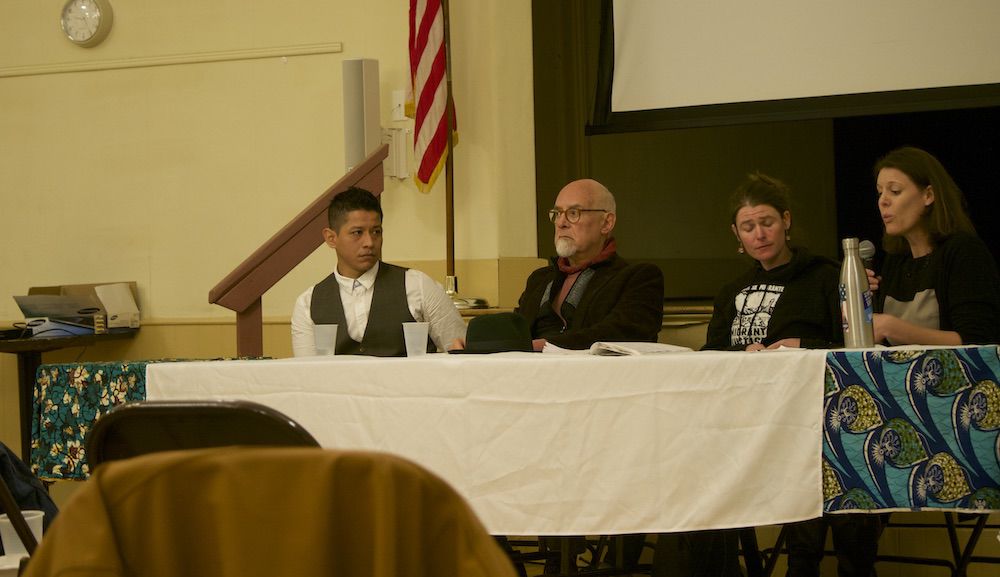 Local activist Kate Larose, right, who traveled to the U.S.’s southern border earlier this year, speaks during a forum on immigration at the Saint Albans Museum last Tuesday. 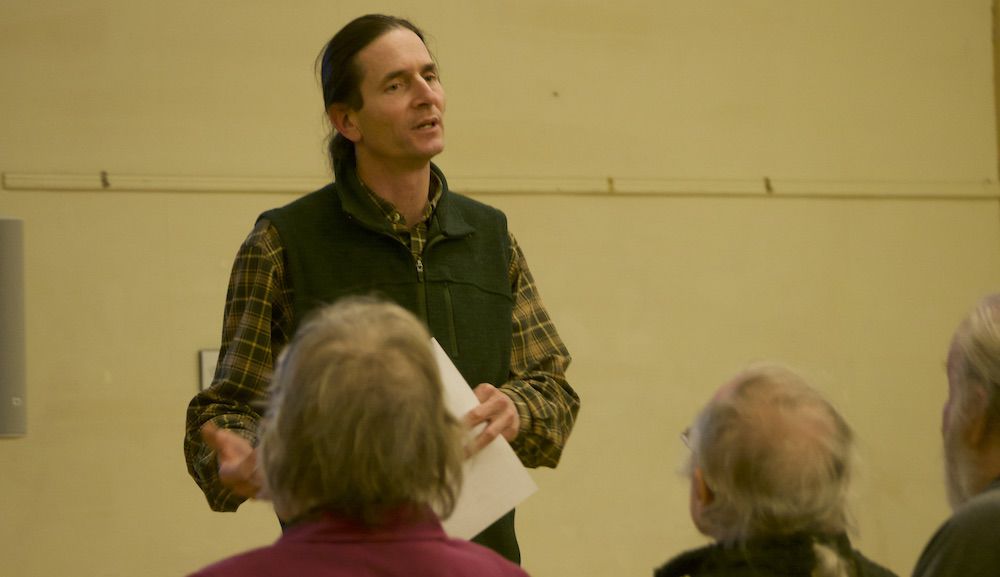 Lt. Gov. David Zuckerman introduces a showing of Undeterred, an acclaimed 2018 documentary on life in a southern border town, during a showing and forum on immigration at the Saint Albans Museum last Tuesday.

Local activist Kate Larose, right, who traveled to the U.S.’s southern border earlier this year, speaks during a forum on immigration at the Saint Albans Museum last Tuesday.

Lt. Gov. David Zuckerman introduces a showing of Undeterred, an acclaimed 2018 documentary on life in a southern border town, during a showing and forum on immigration at the Saint Albans Museum last Tuesday.

ST. ALBANS – A public film night hosted by Lt. Gov. David Zuckerman at the Saint Albans Museum last Tuesday brought the politics of the southwest U.S. border to Franklin County, where members of the public heard from witnesses of U.S. policy at the border.

Tuesday’s forum was billed as a part of Zuckerman’s monthly movie series, a program the Lieutenant Governor said he hoped would help with “fostering community interest and community dialogue” around some of the larger political issues of the day.

As a part of that dialogue, Zuckerman hosted four speakers at a roundtable discussion following a showing of the critically acclaimed documentary Undeterred, a 2018 film about an Arizona border town where residents protested what they viewed as the militarization of their hometown by U.S. Border Patrol.

One of those speakers, Milton Jose Meza Perez, was identified as an asylum seeker from Nicaragua who recently had his asylum bid approved. A second speaker, St. Albans-based artist Chepe Cuadra, translated for Perez.

As was the case with the film Undeterred, Zuckerman said Border Patrol and Immigration and Customs Enforcement (ICE) were invited to send spokespeople to attend, but those agencies declined.

In the case of Tuesday’s forum, Zuckerman said he was told it was because the closest officials allowed to speak on behalf of immigration enforcement organizations were based out of Boston.

Perez lead much of Tuesday’s forum by sharing the story that ultimately brought him north to the U.S., where his application for asylum resulted first in a series of stays in the U.S.’s network of detention facilities along the southern border.

He described his experience within the facilities as “horrible, tough, inhuman, tough to describe and very, very painful,” with conditions being harsh enough that Perez said he was left wondering whether there would be a “light at the end of the tunnel.”

The facilities were, according to Perez, cramped quarters where access to food was poor and water had to be pulled from an available toilet tank. Medical attention was virtually absent, according to Perez, and guards reportedly neglected those under their care within the detention centers.

National press profiling survivors of the detention facilities have echoed many of the same sentiments, describing the detention centers as cramped facilities lacking proper access to medical attention and other amenities.

According to ICE, who have in the past defended their facilities as compliant with federal safety standards, 15 people have died in ICE custody between 2018 and 2019.

Perez said he left his home in Nicaragua following a well-publicized crackdown against protests in the Latin American country where, since April 2018, protestors had taken to the streets to call for the resignation of Nicaragua’s President Daniel Ortega over austerity cuts to social security benefits.

Ortega, equating those protests to a coup, responded with force, launching an ongoing violent and widely condemned crackdown that watchdog organizations believe has resulted in the deaths of hundreds and prison sentences for thousands.

Amid the ongoing crackdown against protestors like himself, Perez said he fled north for the U.S., a country still seen as a place of opportunity.

The trek, he said to Tuesday’s audience, was hard.

“What you saw on the screen is a very small part of what actually happens when you start on the journey,” Perez said through a translator.

He said he still feared gangs that were loyal to Ortega would follow him north and, while he was in Mexico, he was robbed of the documents he would later need for applying for asylum at the U.S. border.

At the border, he was able to still present digital photographs of documents sent by his sister, still in Nicaragua, Perez told the audience Tuesday.

U.S. border officials were skeptical, however, and, according to Perez, harangued him over missing documents.

Still, according to Perez and Cuadra, there was no way Perez could return to Nicaragua.

“In Nicaragua, there are two options,” Cuadra interjected as he translated for Perez. “Either you die or they kill you.”

“He thinks there’s a lot of psychological pressure,” Cuadra said, explaining that the harsh conditions appeared, to Perez, designed to be bad enough to convince him to return to Mexico or Nicaragua rather than follow through with an asylum application.

According to Perez, he was later moved to another facility in chains.

During another transfer between facilities, Perez said he and several others on the transfer bus were left at the bus while the officials conducting the transfer stopped for food along the way. The bus was asphyxiating, Perez said.

“It was so demoralizing and so painful,” Cuadra said, summarizing what Perez had said in Spanish. “[He asked], ‘why are they treating me like a prisoner?’”

According to Perez, he spent several months within ICE custody, before his asylum application was approved and he was granted U.S. residency hardly a month before he presented his story Tuesday.

“He is very thankful and glad,” Cuadra said, before adding that Perez said there was still trauma from the process that he was still working through. “It’s been very tough for him to overcome what he went through... the wounds are still open.”

“The lesson that we as citizens of this country have to work through is why people are coming to this country... and the reasons why people are forced to come to the United States, which is still considered the best country in the world to live,” Perez said.

When his story concluded, Perez received rounds of applause from the audience.

Larose, who visited one of the detention centers and helped with Perez’s eventual settlement in Vermont, said Perez was actually “one of the lucky ones” for having his asylum application approved.

“How do you hear that story and think, ‘you’re one of the lucky ones?’” she said.

While much of the conversation revolved around experiences at the southern border, Migrant Justice’s Sharrow brought those experiences to Vermont.

Much of Vermont sits beneath the Border Patrol’s jurisdiction, which stretches 100 miles inland from the U.S. border. Border Patrol’s presence in the region has also steadily increased since the Sept. 11, 2001 attacks.

According to Sharrow, somewhere between 1,500 and 2,000 migrants worked on Vermont farms, many of them potentially subject to enforcement from U.S. border and immigration officials.

As border activity increased in the southern U.S. between the administrations of Presidents George W. Bush, Barrack Obama and Donald Trump, Sharrow said the northern border was starting to see increased activity as well.

Most notably, she noted there were now temporary Border Patrol checkpoints occasionally installed along Franklin County roads in towns like Richford, Montgomery and Berkshire.

Migrant Justice, according to Sharrow, planned on responding with a “rapid response” network to set up warning signs and other ways of disrupting the checkpoints.

Between the Bush, Obama and Trump administrations, activity along both the northern and southern U.S. borders have steadily increased, with proponents arguing the heightened border activity and prevention of illegal immigration was necessary for national security.

According to the Migration Policy Institute, under the Trump administration, the U.S. has continued to drop the amount of asylum seekers the country can accept annually, reducing that number to an all-time low of 30,000 for 2019.

FRANKLIN COUNTY – David, an immigrant farmworker employed on a Franklin County farm, has worked on dairy farms in the northern U.S. for about …