You are the owner of this article.
Edit Article Add New Article
Subscribe | Sign In
Home
News
Sports
Classifieds
Obituaries
Editorial
Business Directory
Things to Do
About Us
e-Edition
2020 Meet Your Business Community
2020 Resource Directory
NEWSLETTERS
1 of 3 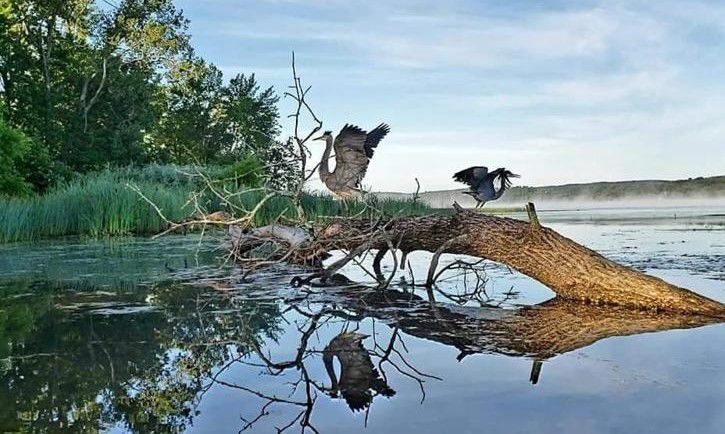 A pair of herons rest on a log on Lake Carmi. 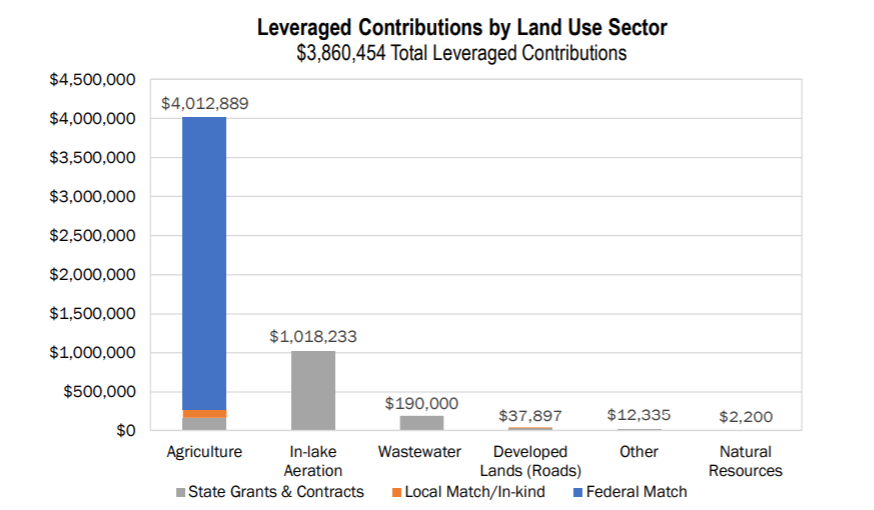 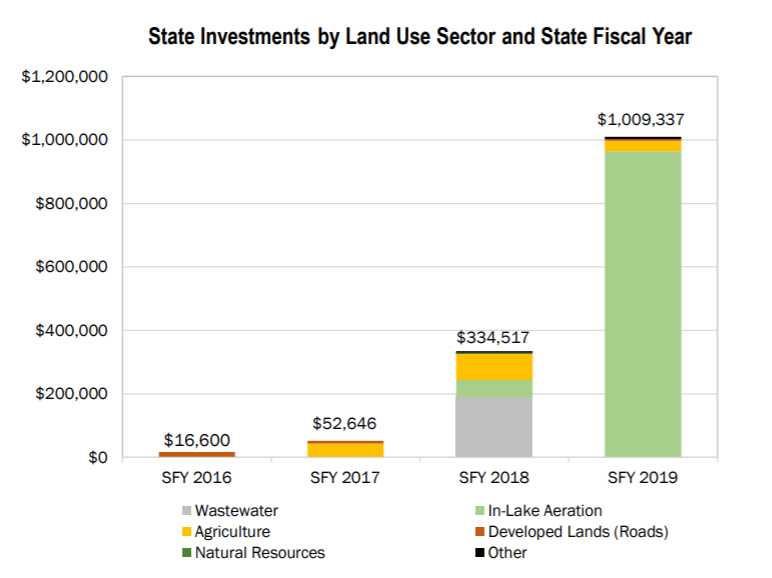 Dollars awarded by State of Vermont agencies to clean water projects in the Lake Carmi watershed, SFY 2016-2019, by land use sector.

FRANKLIN — State and local investments in the Lake Carmi watershed over the past four fiscal years will meet nearly half of the phosphorous reduction targets for the lake, the Agency of Natural Resources revealed Thursday.

The phosphorous reduction was included in a report from the Department of Environmental Conservation (DEC) on efforts to reduce the number, length and severity of cyanobacteria blooms in the lake. Excess phosphorous in fresh water lakes and rivers encourages the growth of sometimes toxic cyanobacteria.

Between fiscal year 2016 and fiscal year 2019, the state invested $1.4 million in efforts to improve water quality in the lake. When combined with the efforts of the Town of Franklin, private landowners, farmers and the U.S. Department of Agriculture, those efforts are projected to total 41 percent of the phosphorous reduction target set in the Lake Carmi TMDL (total maximum daily load).

“Lake Carmi serves as an example of how numerous partners with different priorities can come together around a shared goal and make tangible progress towards improving water quality through hard work, critical investments, behavior change, and expert input,” Vermont’s Secretary of Natural Resources Julie Moore said in a statement.

Lake Carmi has struggled with blooms of cyanobacteria, commonly called blue-green algae, for years. A particularly severe bloom in 2017 led to the Vermont legislature designating it a “lake in crisis” in 2018. That designation required the state to create, and implement, a plan to take immediate action.

In 2019, aerators were installed across the entire lake to reduce the amount of phosphorous being released from the bottom of the lake. It was, Moore notes in her introduction to the report, one of the largest aeration projects ever undertaken in the U.S.

Nevertheless, there were cyanobacteria blooms in Lake Carmi last summer. However, evidence does suggest the presence of the aerators helped to reduce the length and severity of the blooms, according to the report.

But the aerators are not, Moore said, a “singular solution” to the problem.

“Conditions in 2019 demonstrated that the more intense precipitation events and warmer temperatures associated with climate change will continue to create environmental conditions conducive to blooms,” she said. “It is essential that all members of the coalition continue their individual and shared efforts to reduce phosphorus pollution if we are to achieve the shared goal of lasting water quality in Lake Carmi.”

The aeration system is the majority of the state’s investment in the watershed. However, $4 million has been invested in efforts to reduce runoff from agricultural lands, most of it funding from the USDA’s Natural Resource Conservation Service (NRCS). Those funds, more than $3.5 million, funded projects to which individual farmers and the Vermont Agency of Agriculture also contributed.

Of the 611 million kilograms of phosphorous reduction achieved in the Carmi watershed so far, all but a tiny fraction comes from agriculture.

The report documents the increased use of practices designed to keep phosphorous on farmland and out of the lake, including cover cropping, conservation tillage and the conversion of cropland to hay fields.

In 2015, Friends of Northern Lake Champlain and DEC crafted a stormwater master plan for the Town of Franklin which identified 11 projects which would reduce stormwater runoff into the lake. Eight of those projects have been started or completed and the state has agreed to forgive a loan from the state’s Clean Water Revolving Loan Fund made to the town to fund replacement of two culverts on Route 236 which are causing sediment erosion.

There are more than 300 homes and camps on Carmi’s intensely developed shoreline. DEC created a Lake Wise program to recognize owners of home and camps who take steps to reduce their impact on the lake. Twelve properties have received the award which considers the residence’s shoreland, driveway, recreation area and septic systems. An additional 13 properties have been recognized for making improvements in at least two of those areas.

Although DEC previously recommended a community septic system be built to address septic needs of lakeshore properties, the town has indicated it is uninterested in doing so. Efforts have shifted to educating individual landowners about the possible impact of their sewage systems on the lake and encouraging them to have their septic systems assessed.

The state, however, invested in a zero discharge wastewater system for the Lake Carmi State Park in 2018, eliminating all sewage discharges from the park into the lake.

The report is available in full at https://bit.ly/2NxaIgO.

DEC will be hosting a virtual presentation of the report and discussion on Thursday July 9,at 5 p.m.

Those interested in participating in DEC’s planned discussion in July can join at https://bit.ly/2Nu3PwL or call into the presentation at 802-828-7667.

Watch out for cyanobacteria blooms this holiday weekend

BURLINGTON – As Vermonters spend more time in the water this Fourth of July weekend and throughout the summer, state health officials are urgi…