Starting at
$5.00 for 30 days
Get Started
View all rates
You are the owner of this article.
Edit Article Add New Article
You have permission to edit this article.
Edit
Subscribe | Sign In
Home
News
Elections 2020
Sports
Classifieds
Obituaries
Editorial
Business Directory
Things to Do
About Us
e-Edition
2020 Meet Your Business Community
2020 Resource Directory
2020 Discover Guide
NEWSLETTERS
1 of 3 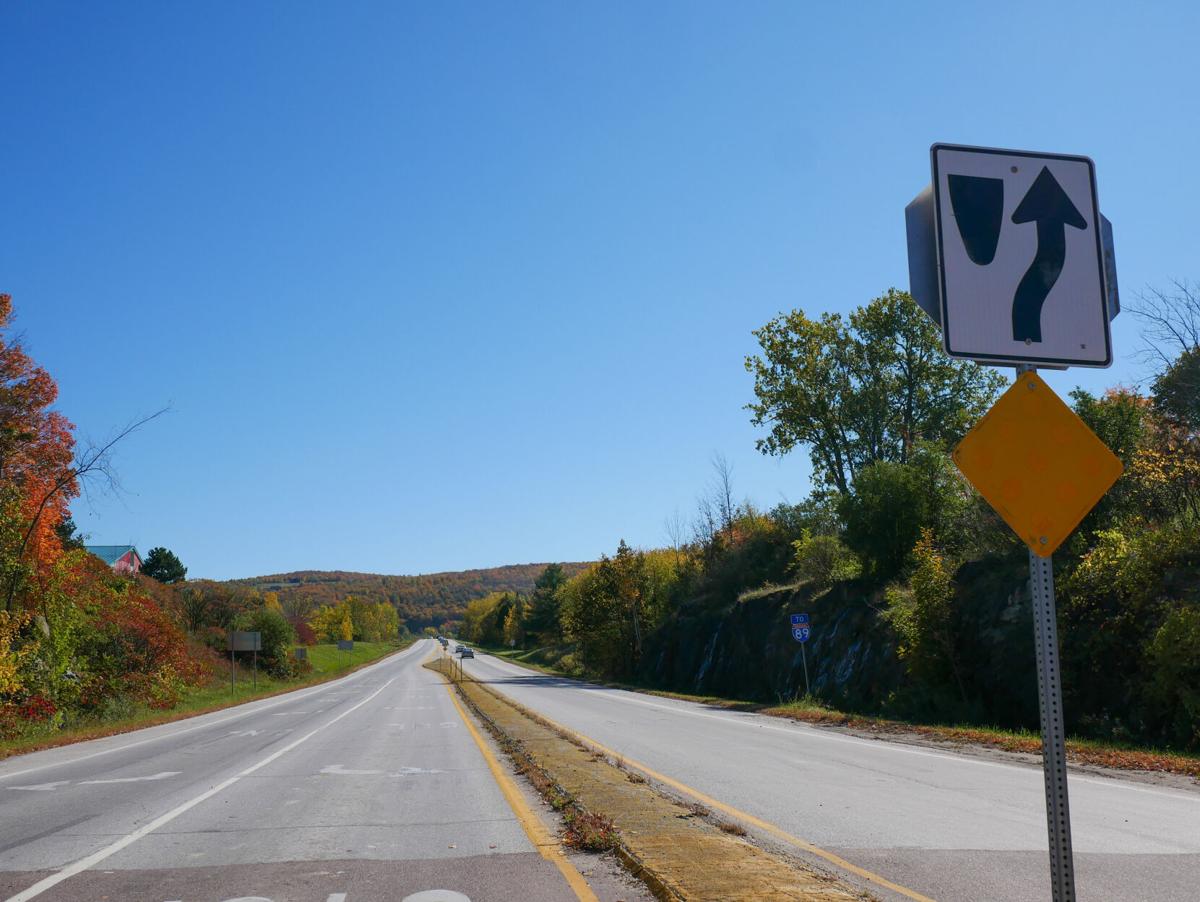 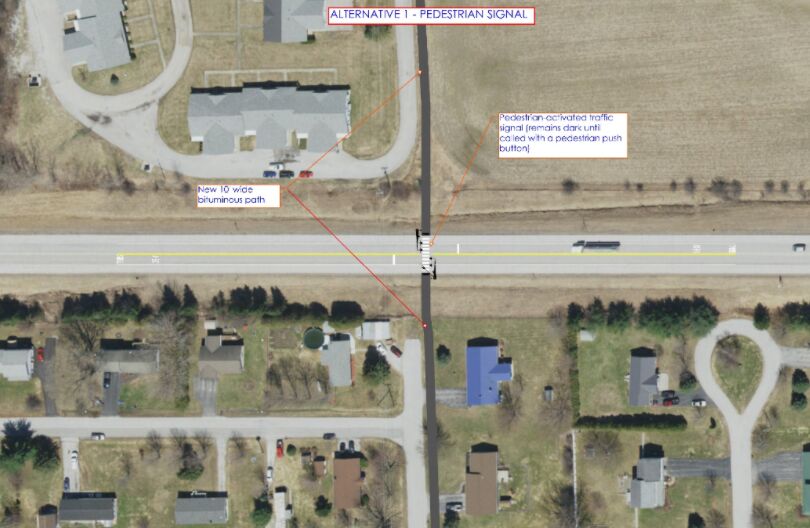 From a presentation on an ongoing Stantec-penned scoping study, town officials were presented with one option recommending a simple path over the St. Albans State Highway with pedestrian safety lights. 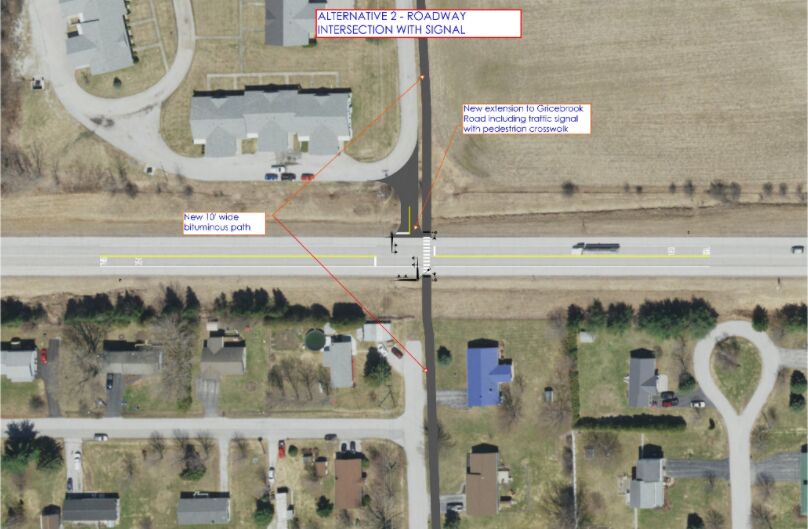 From a presentation on an ongoing Stantec-penned scoping study, town officials were presented with a second option extending Gricebrook Road to a lighted intersection with the St. Albans State Highway.

ST. ALBANS TOWN – In a coming meeting, St. Albans Town’s selectboard will be able to choose from one of two options for a proposed intersection crossing a footpath over the St. Albans State Highway.

A presentation for the town’s selectboard Monday debuted two possible crossings the board could prioritize, the result of an ongoing scoping study exploring a likely crossing near Gricebrook Road and the Thorpe Avenue Extension.

In either case, a multi-use path would cross the highway with pedestrian lights framing the crossing, but the study’s second option adds an additional intersection for cars to exit and enter the highway by way of Gricebrook Road.

According to minutes from the town selectboard’s latest meeting, an engineer from Stantec, the firm studying the proposed crossing, will be returning to the board on Oct. 19 with the hopes of having the board decide on one of the two proposals.

What is the St. Albans Health Path?

For years now, St. Albans officials have sought stretching a pedestrian path over the St. Albans State Highway in order to better connect completed sidewalks in St. Albans City to the Collins Perley Sports and Fitness Center and neighborhoods across the highway.

The town has recently renewed those efforts with a study officials hope will better situate the town for the funding and permitting needed to build a path alongside Gricebrook Road and stretch the path over the highway to the Thorpe Avenue Extension.

The location is already used as an improvised crossing, as a path can easily be traced through the weeds to a hole in the fence near the edge of the Thorpe Avenue Extension.

The St. Albans State Highway itself is owned and maintained by the Vermont Agency of Transportation (VTrans), which has a representative on the working group contributing to Stantec’s scoping study.

During a previous presentation to St. Albans Town’s selectboard this year, the proposed health parth drew enthusiasm from several locals in the meeting’s largely virtual audience.

Officials touted the health path as the next tangible “keystone” in a wider pathway-building initiative.

What are the options facing the selectboard?

The first alternative presented by Stantec was a simple crossing on the highway flanked by pedestrian signals activated by a walker or biker pressing a button at the signals when they’re ready to cross.

Like its counterpart, the first option for a health path would see the path itself stretched along the relatively quiet Gricebrook Road toward Thorpe Avenue in St. Albans City. Across the highway, the path would follow the Thorpe Avenue Extension toward Collins Perley.

This option appeared to be the one most recommended by Stantec’s Erik Alling during Monday’s meeting, as it’d be able to meet the state’s warrants for pedestrian signaling and would likely have an easier time tapping grant funding.

The second alternative presented to St. Albans’s selectboard would follow the first but would also extend Gricebrook Road to intersect with the St. Albans State Highway near the health path’s crossing.

Under the second proposal, the intersection would be lighted, though Alling appeared to warn the selectboard the second alternative recommended failed to meet the standards warranting a signal light and would likely be frowned upon by VTrans.

According to minutes from Monday’s meeting, the second proposal found some interest due to potential development some anticipated for the Gricebrook Road area.

Alling suggested a stop sign could be possible in lieu of a streetlight but warned that VTrans would likely not approve of the proposed intersection.

The selectboard is scheduled to hear again on Alling at their next regular meeting. At the time, the selectboard is expected to endorse one of the two alternatives Alling proposed last week.

The town, according to meeting minutes, has already applied with Stantec’s help for a construction grant supporting the health path.