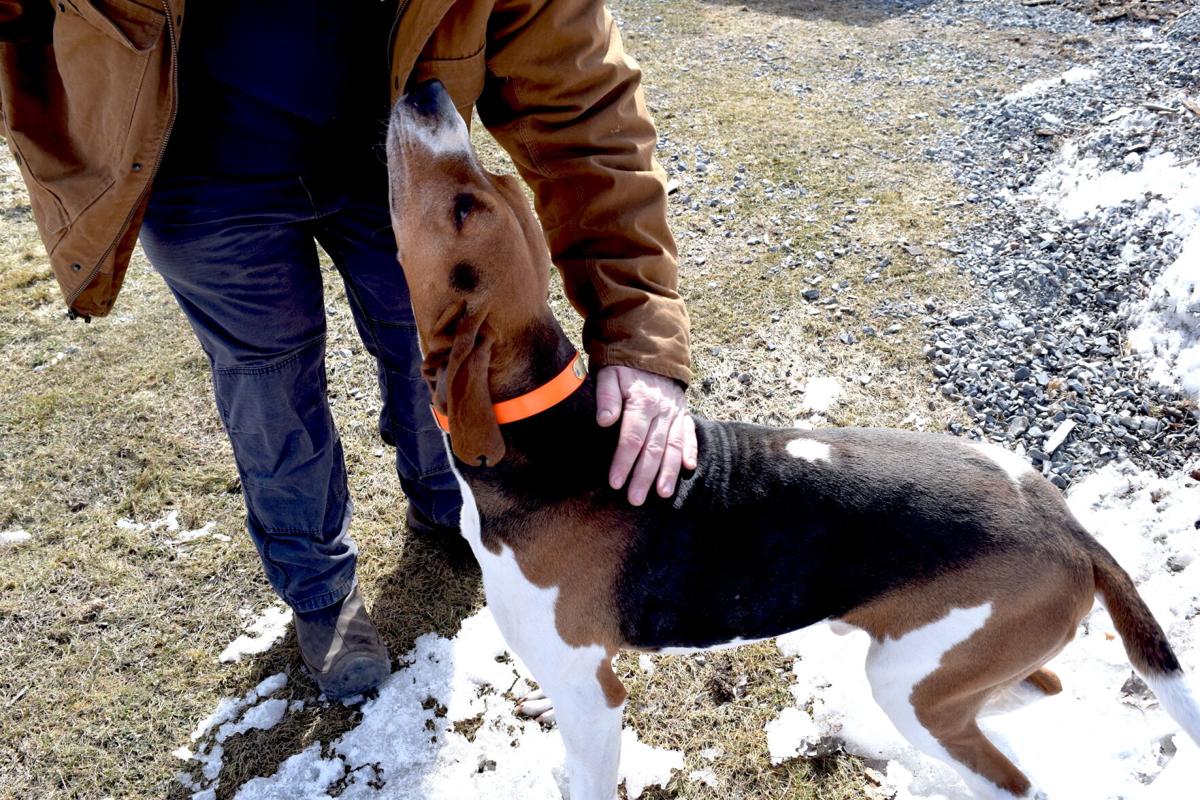 Matt Williams pets one of his hounds on his property in Sheldon on Monday. 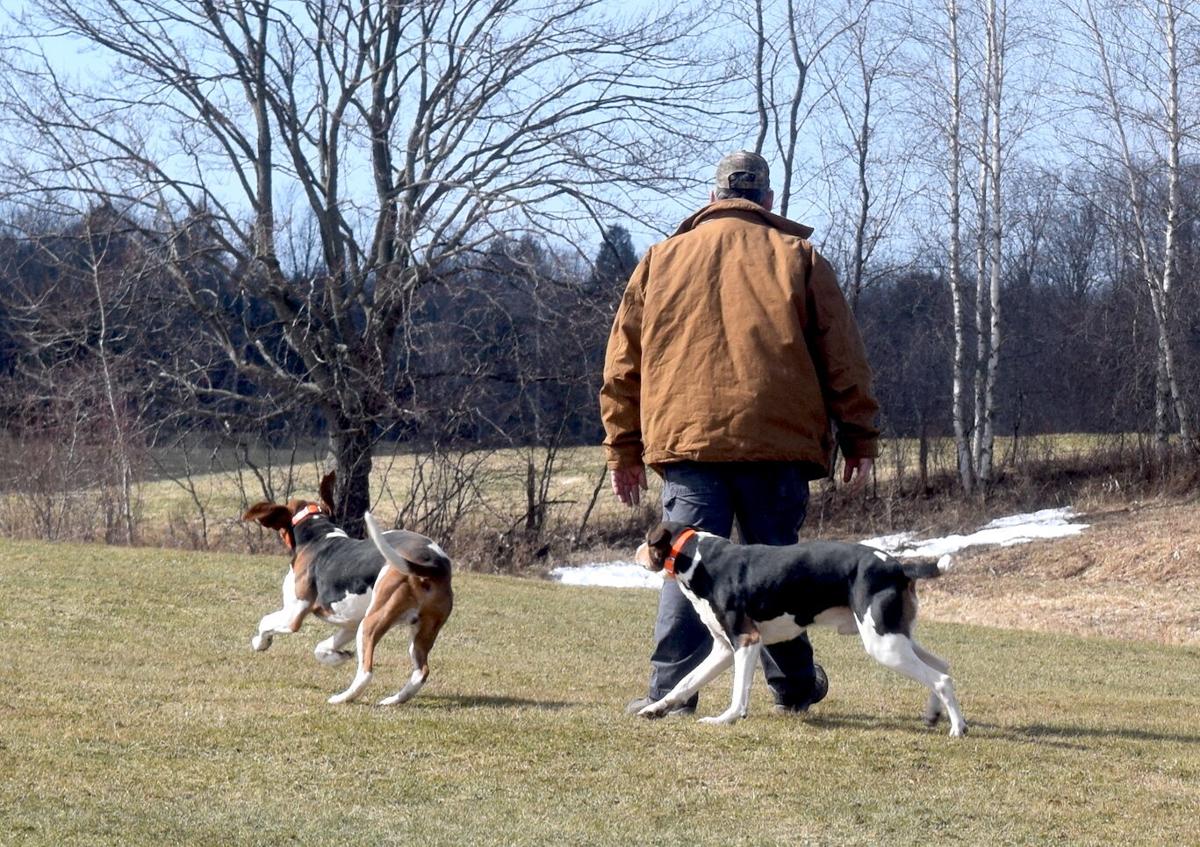 Matt Williams walks on his property in Sheldon with two of his hounds, Clyde and Goose, on Monday.

Matt Williams pets one of his hounds on his property in Sheldon on Monday.

Matt Williams walks on his property in Sheldon with two of his hounds, Clyde and Goose, on Monday.

SHELDON — They are few, but they are passionate. Houndsmen are proud trainers and keepers of hounds who wield their packs, they say, for the love of running their dogs.

“It’s the sound of the hound,” said local houndsman Matt Williams. “When you get into the woods with the dogs, a 4-mile walk into the woods, it’s something. It’s an adventure. You don’t see this with any other hunting.”

Early morning comes, and houndsmen like Williams take to the woods with their “rig dog,” a hound that rides in the car with their nose to the air, eager to catch the scent of a nearby bear.

When they know, Williams said, they let him know it’s time to release toe hounds.

Hunting black bears with hounds is one of the most strictly-regulated hunting practices in the state, according to Bear Hound Association President Butch Spear and wildlife biologist Forrest Hammond.

“You can only hunt bear in daylight hours with up to six dogs in a pack on one bear track,” Spear said. “You have to have a hunting license, a permit to run dogs…(and there are) restrictions for non-residents, too.”

Williams said he only usually hunts with around three of his dogs at once, otherwise the scent of too many dogs could throw off the scent of the bear.

“My hounds will see a deer in the woods and will barely look at it,” Williams said.

Animal rights groups and behavior experts have called for the banning of hound hunting (sometimes called “hounding”) and characterized it as barbaric and violent, with some alleging that hounds are out of control while out hunting with their handlers and threaten violence and harm to animals and people when released on a hunt through the woods.

“(If anyone does that) they’re not houndsmen,” Williams said.

Hammond said a bear’s natural response to threat is to scamper up a tree where they feel most safe, where they would wait patiently until the danger is gone to come down and be on its way, and that bear hounds are sometimes used in conservation in order to isolate a bear in a tree, get it down safely and replace a tracking collar.

Williams said hounds don’t attack bears, rather, they’re strictly trained to follow a scent and tree a bear, and even then most treed bears are allowed to climb down and run away.

“If we kill every bear we tree, we won’t have bears to run for the sport and love of doing it,” Spear said. “We’re sportsmen who love running dogs.”

Spear said 13% to 17% of bears harvested annually are done with dogs, and last year 104 were harvested with hounds.

The others — around 800 bears, according to Hammond — were harvested in other ways.

“A good bear hound is one that doesn’t get close to the bear,” Hammond said. “It will bark at it, and it will send it up...but a hound that gets too close will often be hurt by the bear.”

Once the bear is in the tree and stationary, if the hunter chooses to harvest the bear and has permission and a permit to do so, that’s when he takes his shot, Williams said.

“I drop it with one shot,” Spear said. “I want to hit them right in the head. With a brain shot, they’re dead instantly. We’re concerned with a bear coming down wounded.”

But many times that shot doesn’t come. Williams said of the 107 bears he managed to tree with his hounds Clyde, Goose, Riddick, Dan, Rat and Timber, this year he harvested only 12.

The rest, Williams said, were free to go.

Spear and Willams confirmed that “nuisance bears” — bears that get into farmers’ crops and eat away at profits or wander into campgrounds and places of public leisure — can be chased out by bear hounds and many times prevent direct human-bear contact.

Arguments against the practice

With the introduction of bills H. 172 and H. 316 in the Vermont House, houndsmen of Vermont have received their latest challenge. H. 172 “prohibits the use of dogs in hunting black bears,” while bill H. 316 “proposes to clarify that a hunter training dogs or using dogs to hunt black bear must retain visual and verbal control over the dogs while hunting.”

In a letter to the St. Albans Messenger, Dog and Cat Behavior Specialist and Charlotte resident Alana Stevenson called the practice of raising dogs in kennels and using them to hunt not “humane,” and criticized the training methods, veterinary care, and likened the treatment of bear hounds to “legalized dog fighting.”

Stevenson specifically cites an incident that occurred in October 2019, in which a couple and their dogs were attacked by hunting hounds in Ripton. The 18-year professional animal behaviorist states that nobody has control of a dog if it is visually out of site and hearing distance of the handler.

Houndsmen like Williams say that the visual control that they have over the dogs is through the use of GPS tracking devices, toning collars and key phrases that can stop the dog in its tracks and call them running back to their handler, calling them off the tree even if there’s a bear in it.

The Humane Society of the United States is likewise critical of the practice, stating that it disrupts patterns in the bear population and can result in orphaned young.

“Biologists have also found that hunters misidentify the gender of approximately one-third of treed bears,” The humane society website states.

The passion of houndsmen comes with a price: the cost of the individual sport collars and GPS tracking equipment, toning collars, screen system, training scents, mobile kennels, gas, high-quality dog food and veterinary bills can run houndsmen tens of thousands of dollars every year, with some collars costing over $300 apiece.

“It’s worth it for the dogs,” said Williams, who also said he sends his dogs for off-season training in warmer areas of the country so they keep their scent skills sharp when there’s snow on the ground in Vermont. “All you have to do is tone them, they’ll come back.”

It’s not hunting or training season yet, but at Williams’ home and business, Gallery 833 in Sheldon, the home-built hound kennels are completely shielded from the elements with outdoor access and sleeping areas are heated to a warm 65-70 degrees by his family wood boiler which Williams said also heats his home and business.

Most of the dogs still had some leftover dog food in their dishes having eaten their fill, and the kennel — which Williams said he cleans out daily— smelled of hay and warm wood.

Eager to be released and to run on Monday, the dogs excitedly bayed and sniffed at their cage doors until Williams chose three — plot hound Riddick and treeing walker hounds Clyde and Goose — to run about in the backyard.

Massive and muscular, the hounds leapt and bounded across the grass together before they were called back to their kennels to go back inside.

Hammond, Williams and Spear all agreed that the practice of hunting with hounds is controversial, but that conversation around the subject and a willingness to come to the table to talk about the sport could clear up misconceptions.

“Most of the guys who do it do it for the sport,” Spear said. “Not the kill.”