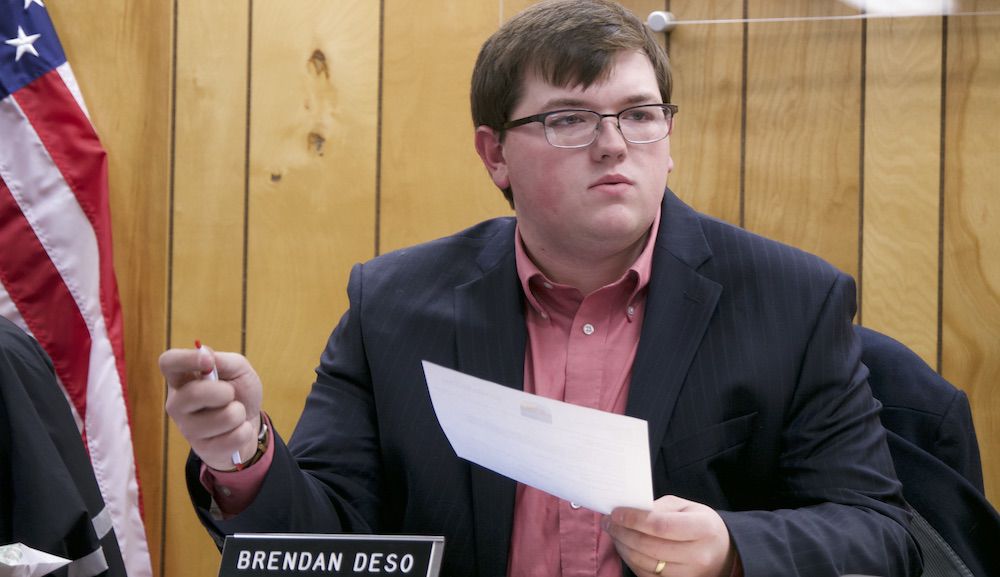 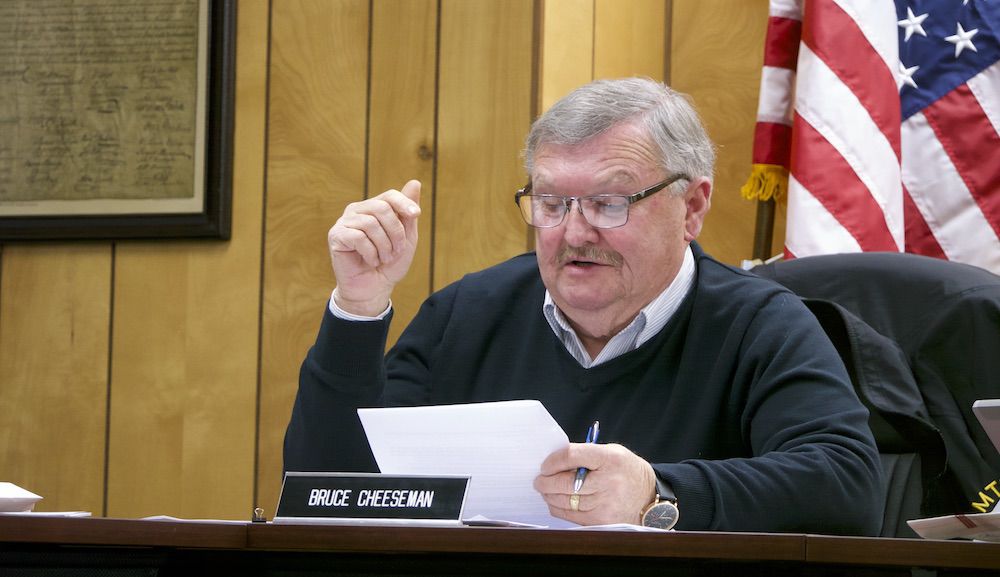 The vice chair of the St. Albans Town selectboard, Bruce Cheeseman, reviews notes during a mid-December meeting of the board. 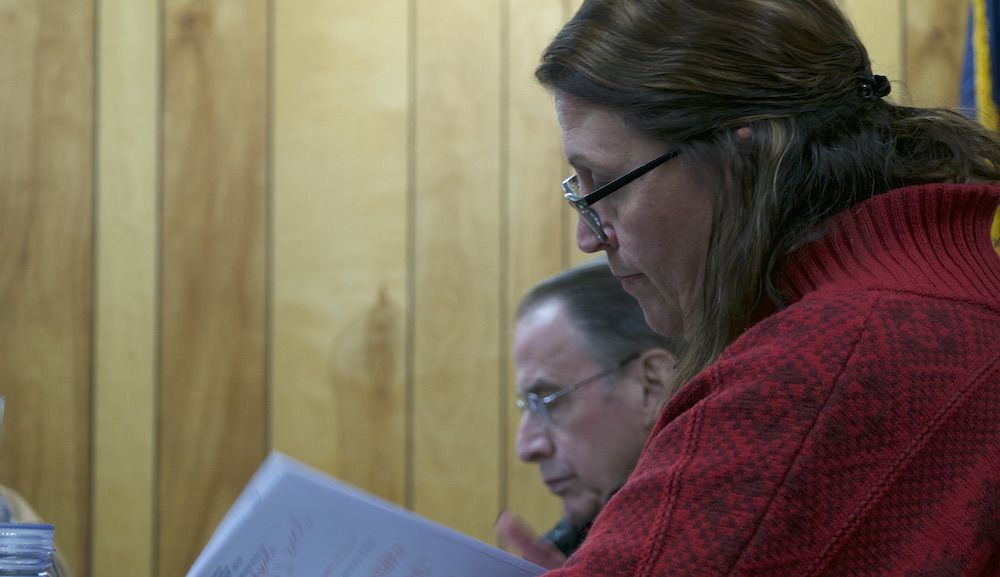 ST. ALBANS TOWN – A decision by the St. Albans Town selectboard to sign a “declaration of official intent” related to the municipal pool project proposed by the town and St. Albans City broke down into a rare 3-2 vote Monday.

The selectboard approved having the town sign onto the “declaration of official intent” saying it would support the project with a bond if approved by voters after sparring over whether the document committed them to spending ahead of March elections.

While selectpersons Al Voegele and Jessica Frost voted in favor after noting the document hinged on voter approval, selectperson Stan Dukas and vice chair Bruce Cheeseman opposed the declaration reading it as a commitment to funding pool work before voters had a chance to approve it.

Selectboard chair Brendan Deso broke the tie in favor of signing, telling the selectboard, “I’m looking at this as a simple precursor to the vote, just setting it up in case it does pass.”

“As indicated in the notes, it was recommended that you do this,” town manager Carrie Johnson said, introducing the notice Monday. “It doesn’t obligate the town for anything, but allows us to move forward should this pass in March.”

“Obviously if this fails, it means absolutely nothing,” Deso added.

The municipal pool project, introduced as a joint project between St. Albans City and St. Albans Town, is expected to appear on ballots in both municipalities this upcoming Town Meeting Day.

The project would replace St. Albans City’s current pool, a seasonal facility officials say is well past its lifespan, with a newer facility that could be enclosed and used in the winter.

If the pool is approved by both communities, the town and city will each pay half of the $5.5 million in construction costs for the pool, a sidewalk to the Hard'ack Recreation Area where it will be located, and safety improvements to the Hard'ack entrance, with the city taking over maintenance duties once the pool was complete.

Dukas, who voted against signing the declaration, opposed it on the grounds he believed the declaration would allow either the city or the town to spend money for the pool ahead of voter approval.

He cited the second graph in the notice, which read: “Whereas, [the town] expects to pay certain capital expenditures (the “reimbursement expenditures”) in connection with the project prior to the issuance of indebtedness for the purpose of financing costs associated with the project on a long-term basis.”

“The way I read it, it’s set up so we could start spending money right now,” Dukas said.

The declaration was reportedly provided by St. Albans City Manager Dominic Cloud and recommended by a bond attorney. "The bond council suggested this to protect both communities," Cloud told the Messenger Wednesday.

Asked about the purpose of the declaration, Cloud said the declaration was recommended by the bond attorney because it allows the municipalities to include any expenditures made now, such as engineering, to be included in the bond. "You have to spend money before the vote to know how much money you're going to need. You have to design what you're going to vote on," he said.

In addition, in order to be ready to begin construction when spring arrives, work needs to begin on securing needed permits, explained Cloud.

In this case, the engineering and permitting include the pool, the sidewalk along Congress Street, and the entrance to Hard'ack.

Cloud added, "If the town's not ready to take that step, we can make it work."

Cheeseman, meanwhile, wondered why the town would even commit to a declaration of intent ahead of the vote.

“We said that we were going to go to the voters and ask voters’ opinion, okay?” Cheeseman said. “So now, by us signing, it makes it look like, you know, we decided as a board that we want this, and that’s not necessarily the case.

“We have gone to the voters and have asked for their opinion. I think we should just let it go until March and find out what the outcome is.”

Several members of the board noted the declaration leads with a reference to the March 3 election date where voters would be asked to approve the project. “The first paragraph says this is subject to a vote,” Deso said.

The first paragraph in the declaration, obtained by the Messenger following Monday’s meeting, leads with a reference to the town’s and city’s tentative agreement on the project and notes the project is tied to a March 3 vote.

“Whereas, the Town of St. Albans, Vermont (the ‘Issuer’) intends to construct certain public recreation facility improvements jointly with the City of St. Albans, which improvements to be considered by the Issuer at the annual meeting thereof to be called and held on March 3, 2020...”

Dukas requested the town’s own attorney review the declaration before the selectboard agree to signing off on it. “We are the wrong people to be talking about this,” he said. “This should be done by our attorney.”

Officials sparred further about the intent of the document and the merits of both its signature and review from the town’s attorney.

“The intent here is described by Dominic [Cloud] – ” Johnson began.

“That’s not the wording,” Dukas said.

“The intent by Dominic and the attorney – just let me finish the sentence – was that this would be in place once the vote passed, maybe even March 5 or March 6, we would both start spending money to advance what was voted on by the taxpayers,” Johnson said.

“In no way was there an intent to start spending money from a bond that hasn’t been passed yet,” she added.

“That’s not what this says,” Dukas answered.

“That is your interpretation and I will get a legal interpretation,” Johnson said. “But I don’t believe there is any harm in signing this now.”

“I don’t want to take a chance,” Dukas said.

“That’s a great question,” Johnson said. “I just wish it had been brought up in advance of tonight’s meeting so I could have asked the question.”

“I don’t know why we’re wasting our time calling lawyers or anything,” Cheeseman said. “Just wait until March. We’ll sign it in March. Why are we wasting our money on attorneys?”

Because the St. Albans selectboard meets on the first and third Mondays of the month, the next regular meeting following Town Meeting Day, during which the selectboard would be tasked with reorganizing, would be March 16.

According to Deso, even if the declaration allowed for spending ahead of voter approval, the town did not currently have the money since the bond had yet to be approved. “If we approve this and do this tonight, we don’t have access to $2.7 million,” Deso said.

“I am completely done,” Cheeseman said. “I am not signing it tonight. I’ll wait for the voters. We’re wasting our time and our money.”

“I just don’t see the harm in it,” Deso said. “If it allows us to move forward right after the vote, that’s going to be the voters’ will.”

“Then we wait for the voters’ will,” Cheeseman said. “Why are we even discussing this? Why are we wasting our time and our money to call an attorney?”

“I didn’t want to call an attorney,” Deso said. “I feel like this attorney’s free opinion was valuable enough.”

Both Voegele and Frost voted in favor of signing the declaration. Cheeseman and Dukas voted against it, leading Deso to vote in the declaration’s favor to break the tie.

“I’m going to sign this. It’s a preparedness thing,” Deso said after voting. “It doesn’t entitle us to spending any money.”

“I disagree with your decision, I’m going to tell you this right now,” Cheeseman responded.

“But after a quorum of the board has a vote and adopts something or agrees to do something, those in the minority, like I was in years past, will not speak against the decision.”

The selectboard took one question from the audience, when town resident Bob Fairbanks questioned the board’s decision to sign off on a letter he felt would allow the city to spend town funds ahead of the election.

“They can’t. We don’t have an agreement,” Deso answered. “It’s for a bond attorney. It’s not for giving anybody a blank check.”

Later in the evening, the selectboard authorized Deso and Dukas to join town manager Johnson in negotiating a detailed agreement with the city over management of the municipal pool.