You are the owner of this article.
Edit Article Add New Article
You have permission to edit this article.
Edit
Subscribe | Sign In
Home
News
Elections 2020
Sports
Classifieds
Obituaries
Editorial
Business Directory
Things to Do
About Us
e-Edition
2020 Meet Your Business Community
2020 Resource Directory
NEWSLETTERS

MONTPELIER – Gov. Phil Scott has joined counterparts from New Hampshire and Maine in calling for an end to a recently reinstated tariff on aluminum from Canada.

In a letter sent to the Trump administration Tuesday, Scott, joined by New Hampshire governor Chris Sununu and Maine governor Janet Mills, called for removing a 10 percent tariff on Canadian aluminum, citing concern about the impacts an aluminum tariff would have on local businesses.

President Donald Trump recently reimposed a tariff on certain aluminum sourced from Canada, accusing Canadian manufacturers of flooding the U.S. market with aluminum and arguing the tariff was needed to “protect American industry.”

A tariff is a tax placed on imported goods intended to make imported goods more expensive in order to encourage buying products produced within the importing country.

A previous tariff placed on Canadian aluminum had sparked a trade war between the neighboring countries before the Trump administration ultimately agreed to remove the tariff in 2019 to ease the passage of a recently negotiated trade agreement between the U.S., Mexico and Canada.

In their letter Tuesday, Mills, Scott and Sununu argued the reimposition of a tariff would be damaging for businesses’ supply lines and affect consumers already struggling with the impacts of the ongoing COVID-19 pandemic and its resulting recession.

“These tariffs are unnecessary and inappropriate to which there will be negative consequences, one of which is the artificial inflation of costs to aluminum goods to consumers and suppliers,” the governors wrote in their letter.

The three governors said they feared higher production costs would likely be felt everywhere from the construction of military aircraft to washing machines and beer cans.

“As a result,” the governors write later in their letter, “the rising costs will add to the challenges already facing most business sectors during these challenging times caused by the COVID-19 pandemic.”

They also said they feared the disruption of Canadian and American trade ties, which are especially pronounced along the three states’ borders with Canada. “Canada and New England share more than just a border,” the governors wrote. “We are allies, business partners, colleagues and family.”

The reimposition of an aluminum tariff comes only months after the adoption of the U.S. – Mexico – Canada Agreement, a successor to the North American Free Trade Agreement governing commerce between the three North American countries.

In response to the reimposition of an aluminum tariff, the Canadian government has announced plans to impose “dollar-for-dollar countermeasures.” 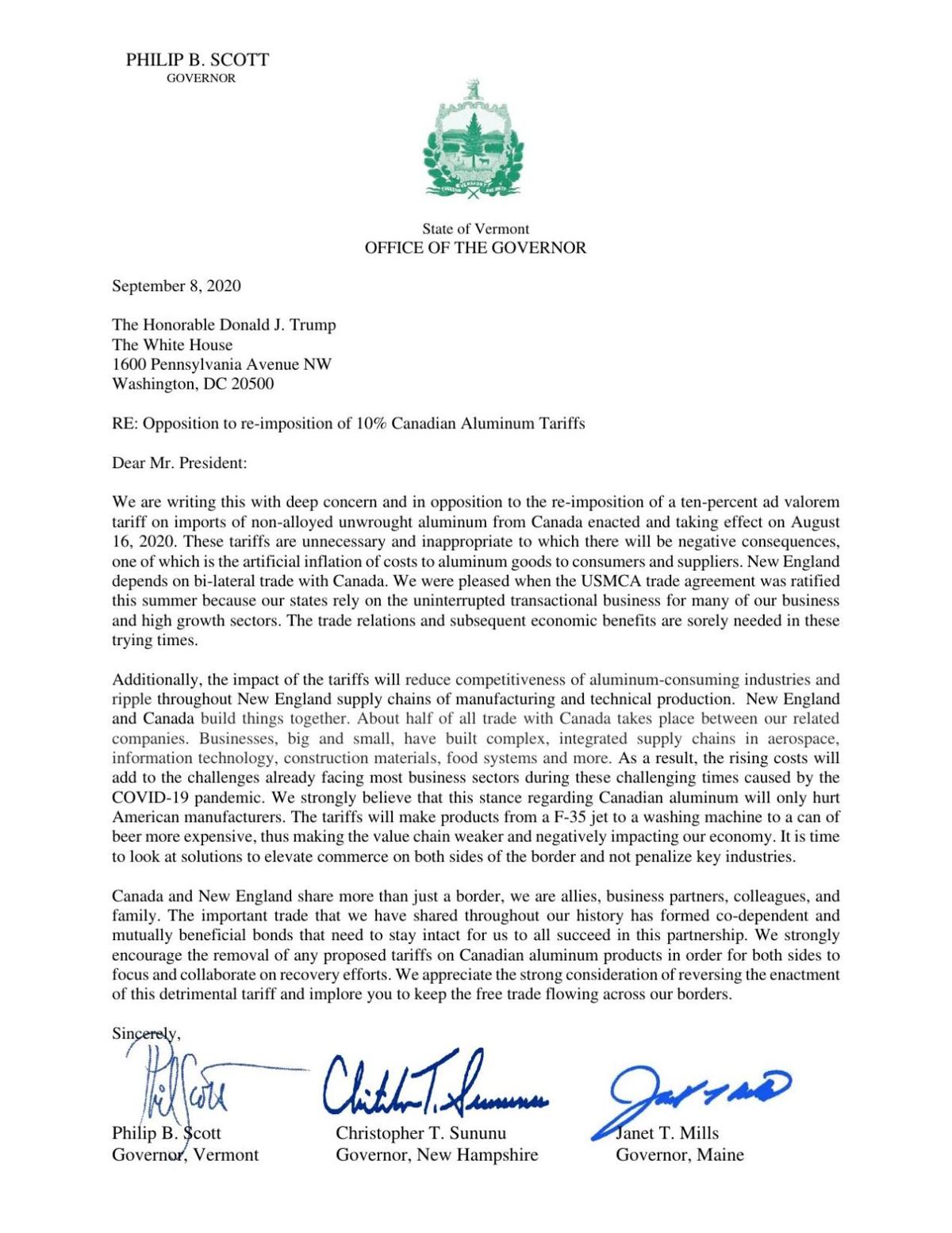