You are the owner of this article.
Edit Article Add New Article
You have permission to edit this article.
Edit
Subscribe | Sign In
Home
News
Sports
Classifieds
Obituaries
Editorial
Business Directory
Things to Do
About Us
e-Edition
2020 Meet Your Business Community
2020 Resource Directory
NEWSLETTERS
1 of 4 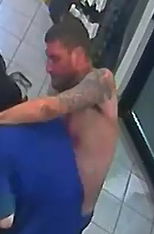 ST. ALBANS — St. Albans Police are searching for a man who allegedly entered a store Wednesday night and assaulted a cashier before fleeing with several stolen items.

The incident took place at the Switchyard Mobile on Lake Street at approximately 11:32 p.m.

The man was captured on video cameras at the stores. He is described as white, 5 feet, 10 inches tall, with a medium build. He wore khaki shorts but no shirt. The video shows multiple tattoos on his back, neck, biceps and shoulders.

Subject is described as a white male approximately 5’10” with a medium build in his 30’s. He was last seen wearing khaki shorts and sneakers, but no shirt. Surveillance video showed that the subject has several tattoos on his body: middle of the back, lower portion of his neck and on both right/left biceps/shoulder.

Police are asking anyone with information to contact them at:

Callers wishing to remain anonymous may go to http://stalbanspd.com and click on the cell phone on the right side of the page to submit a tip.