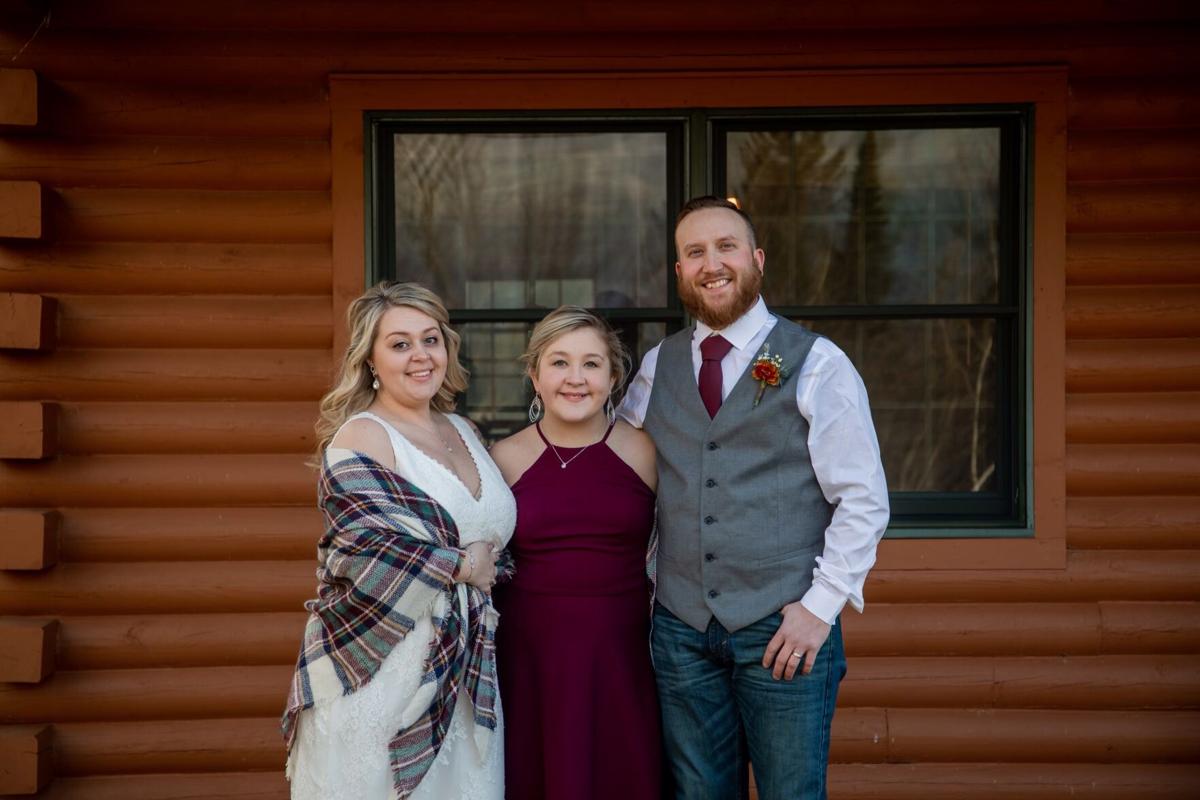 Jake Elkins poses for a wedding photo with his wife Jessica, far left, and his daughter Lily. Jake will be going in for his 10th surgery on April 8. 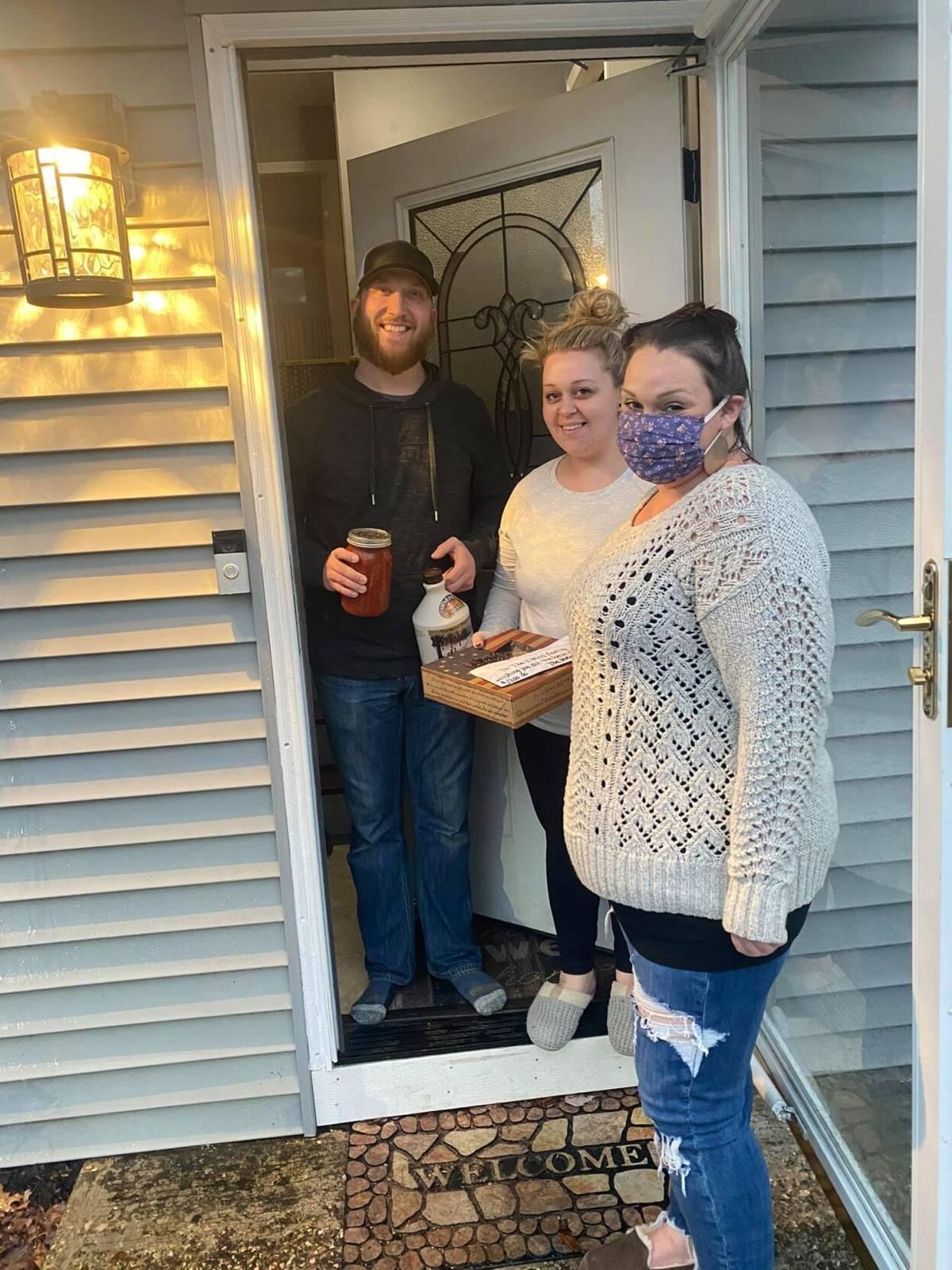 Jake Elkins poses for a wedding photo with his wife Jessica, far left, and his daughter Lily. Jake will be going in for his 10th surgery on April 8.

“I have my moments. I’m not perfect by any means. I’m not full of myself. I’d say I’m pretty mellow, I’m pretty humble,” says Elkins.

Elkins grew up in Richford and was born with a condition called pectus excavatum, otherwise known as an inverted sternum. Elkins says that he was so young the surgery didn’t work.

“We really pushed to try to have corrective surgery to fix that, so I would have somewhat of a normal life,” he said.

At age 4, he says his adenoids swelled up in his sleep and he couldn’t breathe. But things really got weird when he was 16 and his spleen ruptured without warning.

“Doctors even asked, you know being a 16-year-old kid, they thought I had maybe been hanging out on a four-wheeler and drinking with friends and got into an accident. It’s usually due to an impact. But there wasn’t,” he says.

Elkins spent four hours in the ER before being rushed into emergency surgery.

“My whole torso was filling up with blood. Every time I would sit up I would start to pass out from the blood loss,” he said.

After the ordeal, doctors told Elkins that he had lost anywhere between one-third and half of his blood.

That normal life included meeting his wife Jessica on a blind date that never happened.

“I’d actually started seeing one of her friends that didn’t work out. We reconnected a couple years later and hung out. She’s my rock,” says Jake.

“I’m not worried at all. Sometimes, I just kinda go numb. My brain shuts off. If I’ve learned anything at all from this though ... it’s to be thankful. Just survive one day at a time.” — Jake Elkins

“We realized we were the blind date that never met. With Jake it’s for the most part, always been easy! I know it sounds corny but he truly is my best friend,” says Jessica.

Jake and Jessica had a daughter that they named Lily in 2010.

During a routine pre-employment physical for a job interview, doctors discovered a heart murmur in Jake.

“He had me breathe out and hold my breath and he could still hear it, which is not normal. He sends me to a heart specialist, which is where they could see it,” he says.

“It” was an 8.6 cm aortic aneurysm. Doctors normally operate at 5 cm.

“I’ve had many surgeries but ... you’re talking about the heart, that was what was scary,” he said.

He was told that without open heart surgery, Jake would live 3 to 6 months.

“I didn’t believe him because he’s always a smart ass. I just remember sitting there listening to the doctors talk and thinking ‘I don’t want to do this without him.’” she says. “This is something you hear about other people going through. You never imagine yourself experiencing it.”

Jake’s surgery lasted about six hours and included a blood transplant. He spent eight days in the hospital and four months recovering at home.

Doctors still thought it was strange that a person of Jake’s age could have an aneurysm and wanted to conduct more tests. “They recommended genetic testing. Medicaid didn’t want to cover the bill — which was $3,000- $5,000 — because they didn’t deem it necessary. There wasn’t any sign of this in my family before that.”

Things had also returned to normal again. He finally got another insurance company to approve the testing.

Dr. Duke Cameron is one of the foremost experts in LDS. He also happens to be Jake’s doctor. before coming to Mass General, Cameron spent over 30 years at Johns Hopkins where this original disease was described in 2005.

“I was the surgeon on most of the original cases, so that’s why we were linked up,” he says.

Cameron says that the disease is similar to another called Marfan’s but is much worse.

“People develop aneurysms and have these ruptures and they can have it much younger in their lives. That’s why it’s very important that doctors know about these diseases,” he said.

“There’s a 50% chance that you will pass this on to any child that you have. So, we had my daughter tested and she doesn’t have it,” Jake says.

Two years after his heart surgery, the ball of Jake’s femur suddenly fell off. It’s a condition called Epiphysis.

Jake had surgery and after four months on the donor list he had a second surgery to place the donor bone in his femur.

Jake and Jess managed to buy a house in September. A little less than a month after they purchased the property, Jake says he noticed something strange and decided to visit the doctor, where he was diagnosed with testicular cancer.

“All of the ‘what if’s’ ran through my head. It was a very silent car ride home. What made it worse was the week he was diagnosed and had surgery was the week of the cyber attack,” says Jess.

Ransomware attacks on the UVM Health Network, as well as COVID-19 prevented Jake from being able to get in for scans right away. When he finally did make it into the hospital, doctors found another enlargement of his aortic root, this time in the aortic arch.

In the meantime, Jake had surgery for cancer but doctors say he has a “Ticking time bomb in his chest.” Jake will be going in for a second open-heart surgery at Massachusetts General Hospital on April 8.

“We found out that had we known I had LDS prior, they would have replaced the aortic arch. That part usually ends up dilating within five years. So, originally they just replaced the ascending aorta that was affected,” says Jake. “I’ve had people talk to us. There are people who say, ‘I can’t believe how you guys hold it together,’ but to me this is my life.”

This will be Jake’s 10th surgery.

“Honestly, I’m burnt out. It is mentally draining! But you can’t stop.... We manage and we always figure it out. We have a great support system with family and friends so that always helps us too,” says Jess.

Cameron says that there is a 95% chance of survival but the surgery is also not without expense.

“These operations — for people who don’t have insurance — it’s almost out of their reach. There are a lot of people involved in making sure this goes smoothly. That’s why it’s so expensive,” says Cameron.

On Saturday, Hemond’s Sugar Shack in Richford held a surprise breakfast with the intention of donating all the money raised to someone deserving. Owner Tracy Hemond has known Jake and his family for years.

“When I hear about people struggling with illnesses and not being able to financially afford all that comes along with them, it’s very heartbreaking,” she said. “My first impression of Jake’s struggle was, ‘Wow, he’s so young.’”

“I’m not surprised,” says Hemond. “I have watched as well as been part of this community giving back time and time again.”

Jake says that he was blown away by the support and that he didn’t even know about the benefit. He was too busy throwing a shotgun wedding.

“We were trying to plan our wedding just in case we didn’t get the opportunity, in case heart surgery didn’t go as planned. We wanted to seize the moment,” says Jake

Jessica says no one hesitated when they mentioned that they wanted to take the plunge.

“We have been together for 12 years and we have tried to plan our wedding so many times and something has always come up or gotten in the way and this time we just decided to do it!” she says.

“I’m not worried at all. Sometimes, I just kinda go numb. My brain shuts off. If I’ve learned anything at all from this though ... it’s to be thankful. Just survive one day at a time.”