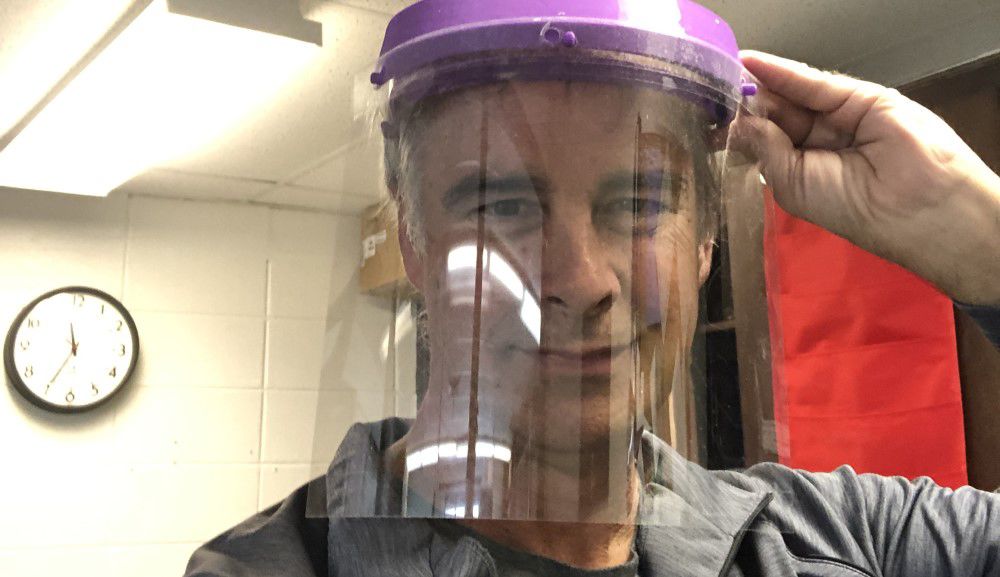 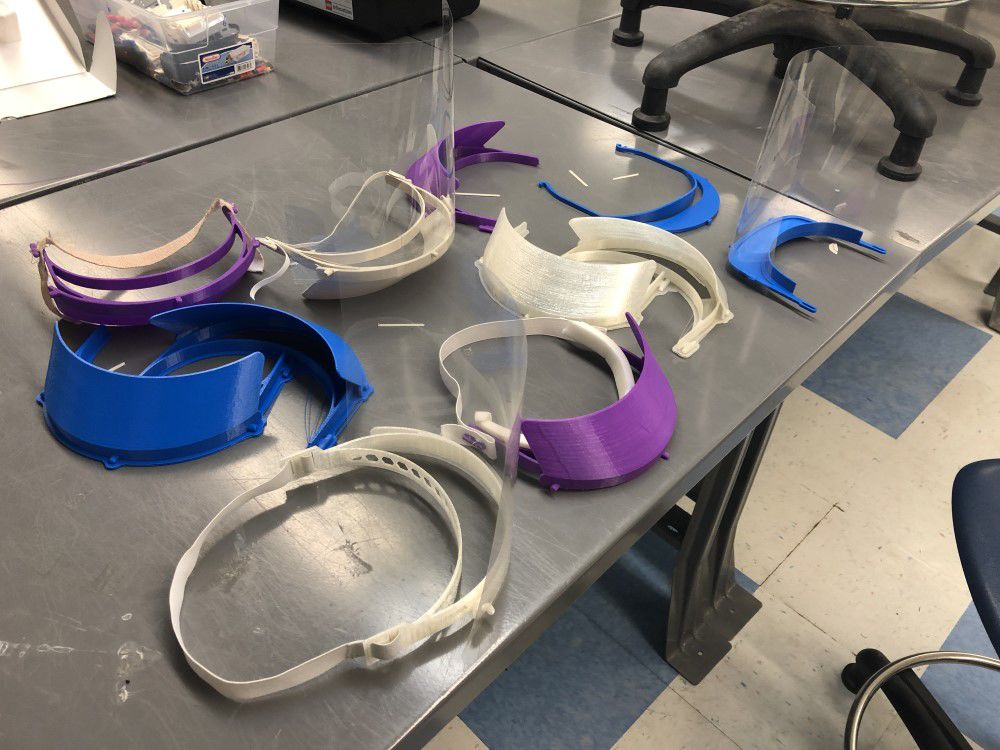 Components to protective equipment produced within Missisquoi Valley Union high school’s makerspace are spread out on a table. 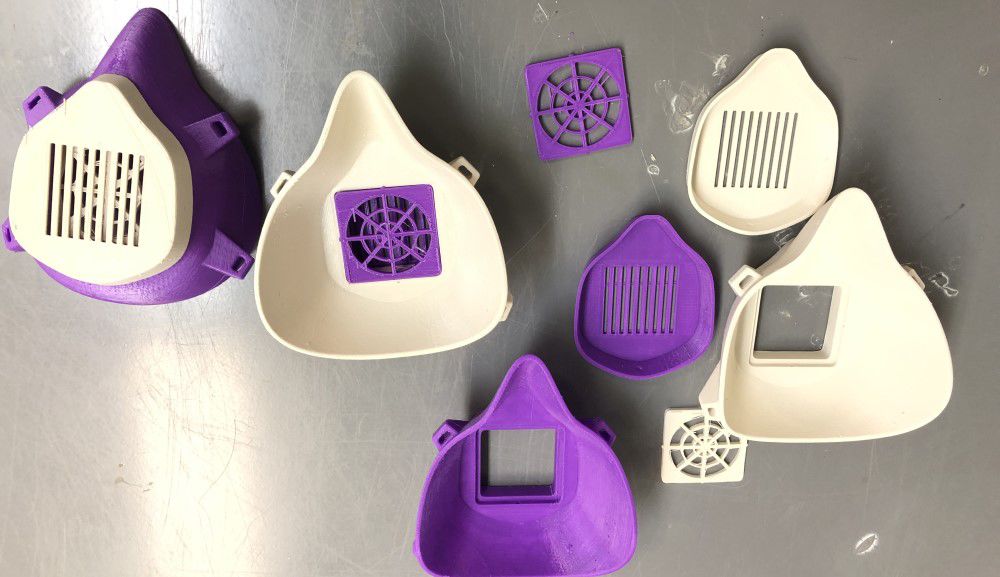 Richard Ballard has experimented with producing face masks as well. 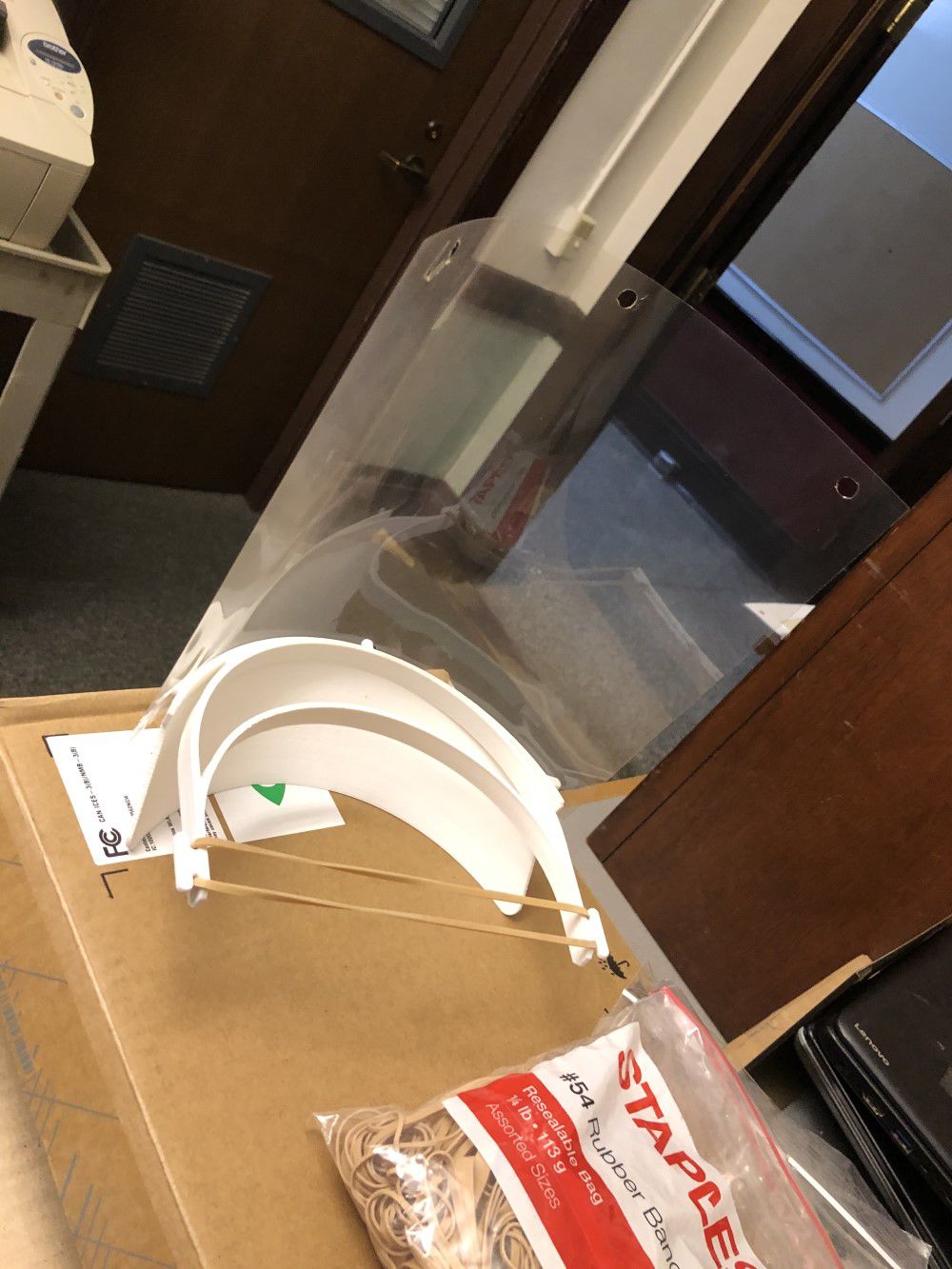 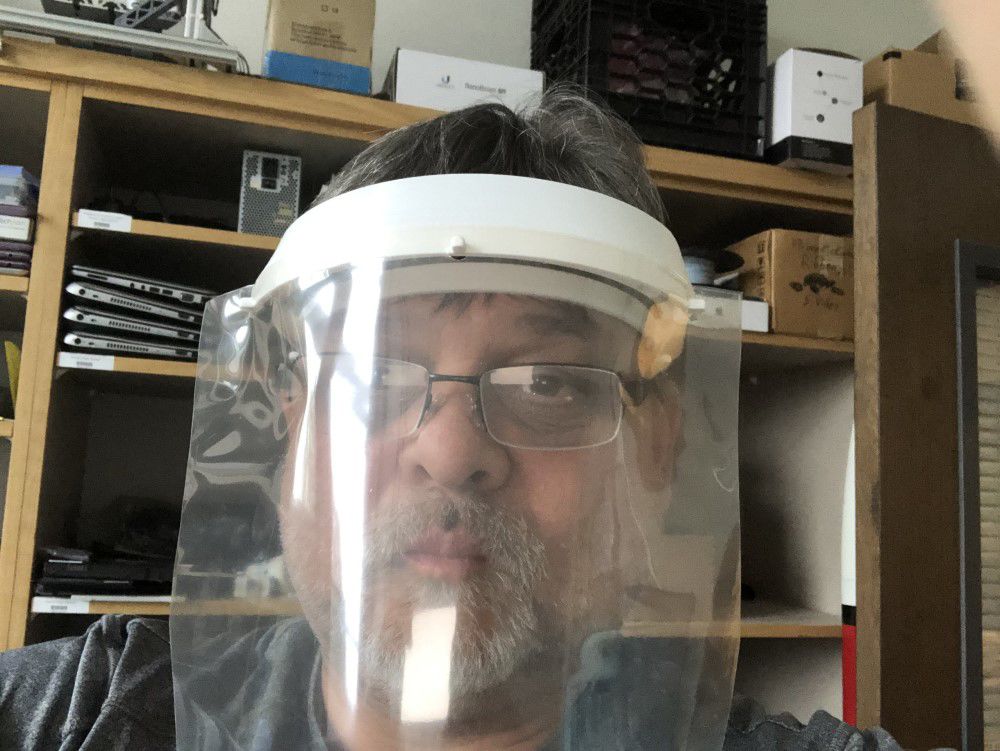 SWANTON – Idled by state orders to close schools to in-person learning, 3D printers in school makerspaces across Franklin County are firing back up again to help fight the COVID-19 pandemic.

Soon, the impromptu printing operation could incorporate Swanton Schools’ own 3D printer and will be joined by schools in the Franklin Northeast Supervisory Union (FNESU), where staff members from several schools will begin producing protective equipment following Ballard’s lead.

Ballard, supported by Evan Metayer from the Missisquoi Valley School District (MVSD)’s after school program, said he has managed to produce a handful of face shields for local organizations, including a long-term care facility in St. Albans.

“There’s a need for this, but I wasn’t sure how much there was,” Ballard told the Messenger Thursday.

When a Facebook post from Ballard about producing personal protective equipment – or PPE – began circulating online and won hundreds of shares and requests from local organizations, Ballard realized there was a severe need for that equipment in the area.

“In my world, that went viral,” Ballard said. “I realized there was a need for this stuff.”

Ballard experimented with both face shields and respirator-style face masks, opting to focus on face shields since, according to Ballard, those were “safer to do with 3D printing” and would maybe be of more use to health care workers who are advised by the Centers for Disease Control and Prevention (CDC) to only use home-sourced masks as a last resort.

Using 3D printer models endorsed by the National Institutes of Health, Ballard tested models for face masks and shields, and already has about a dozen face shields prepared for use in the community.

“They’re pretty simple,” Ballard said of the face shields. “They’re pretty much a transparency that hooks up to it, an elastic band in the back and the 3D printer does the rest.”

The process can be time consuming, however, taking somewhere between five and six hours for the printers to produce the component needed for face shields.

Ballard said he was experimenting with designs that could be produced faster, as a high demand for PPE means the MVU teacher already has requests for face shields to fill.

Shortages of PPE have become a concern nationally as states, hospitals and other organizations scramble for equipment to protect medical workers and other essential staff from COVID-19, an upper respiratory disease caused by a highly contagious coronavirus.

While state officials have said there is enough PPE stored in Vermont to last the state’s health care system through the state’s most likely outbreak scenario, the state is still aggressively sourcing PPE, members of Gov. Phil Scott’s administration told reporters last week.

Demand has anecdotally appeared high as well, with Ballard saying he’s heard from people as far away as Rhode Island with requests for PPE. “I said ‘I can try,’ but I want to focus on people locally first,” Ballard said.

According to FNESU’s superintendent Lynn Cota, five members of the supervisory union’s staff, with support from Missisquoi Valley, will begin producing face shields within “the next day or two” for local distribution.

“[Missisquoi Valley School District] employees were the ones who really got this idea off the ground,” Cota told the Messenger in an email. “They have shared their design with us and we have five people so far who are willing to get started. We are in the early stages now and should be ready to move into production in the next day or two.”

As of Thursday afternoon, the supervisory union’s technology director Dominic DeRosia, who’s coordinating FNESU’s PPE project, told the Messenger one of the schools had produced their first face shield and that it “looks like we’re ready to get going.”

“We know there are a lot of people out there that don’t have the equipment they need to do their job safely,” DeRosia said. “We happen to have tools available to us which allow us to create some of that equipment, and we are more than happy to help any way we can.”

At MVU, Ballard said he of the materials he’d need right now, though, like other groups volunteering to make PPE in the area, he was short on the elastic bands needed for the back of the face shield. He also has supplies of filtering material available should he start making respirator-style face masks for public use.

Still, for those wondering how they could support Ballard’s work, he asks that they reach out through his school email at Richard.Ballard@mvsdschools.org.

“I think things are starting to catch up – more PPE is coming in and manufacturers are starting to jump back into this,” Ballard said. “But for a couple of weeks, at least, I’ll fill in as much as I can for local people who don’t’ have anything.”

Meanwhile, Ballard said the support he’s received from the community has been profound and is something he attributes to people at large looking for ways to help their communities while self-isolating through the COVID-19 pandemic.

“I think you see it all across the county, where people are stepping up to try and help,” Ballard told the Messenger. “We’re a giving community, and people want to participate and help out where they can.”

When it came to his own contribution, however, MVU’s technology specialist appeared more modest.

“It’s not a huge deal,” he said. “I just wanted to do what I could do to help, and this is something I know how to do.”

ST. ALBANS – A growing group of local seamsters and sewers have come together through Facebook to produce cloth face masks for the public – an…