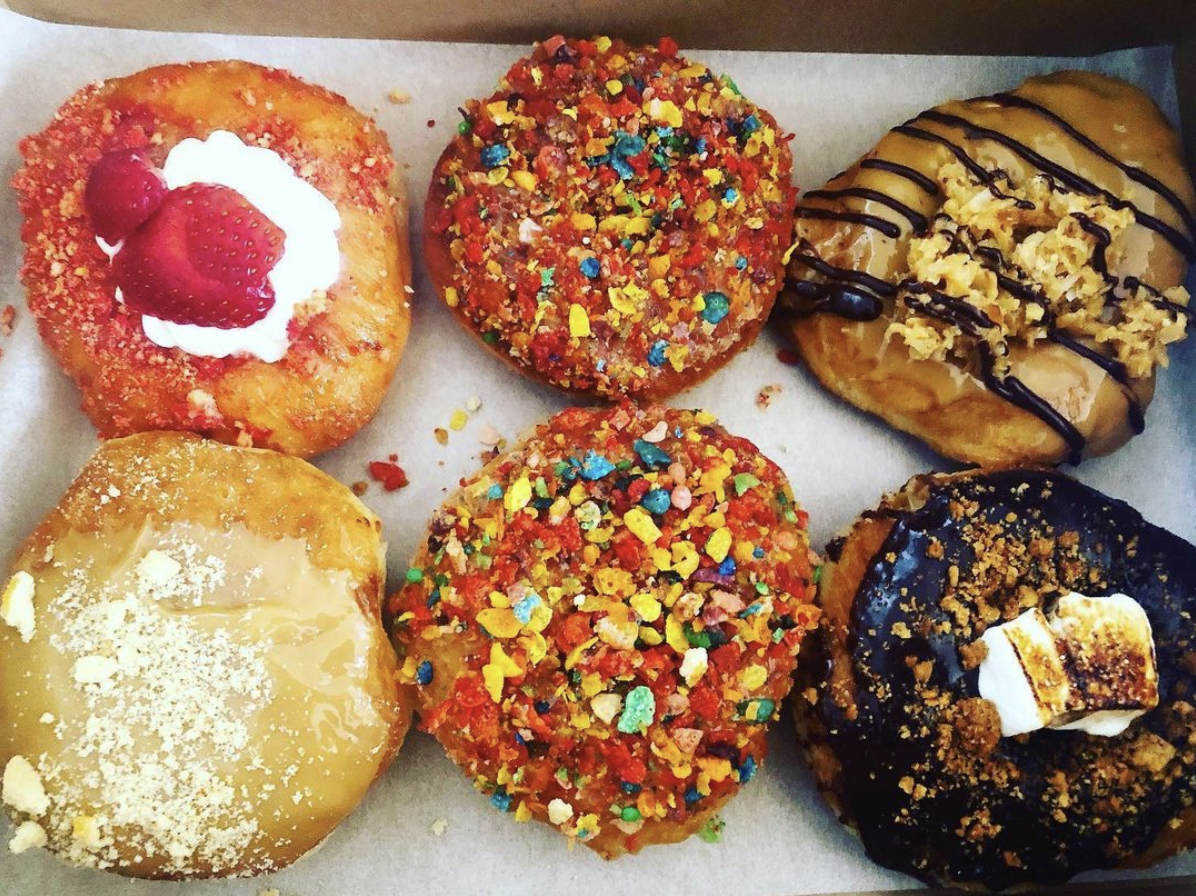 A selection of Hangry The Donut Bar donuts are seen in this photo from the business’ Instagram account. 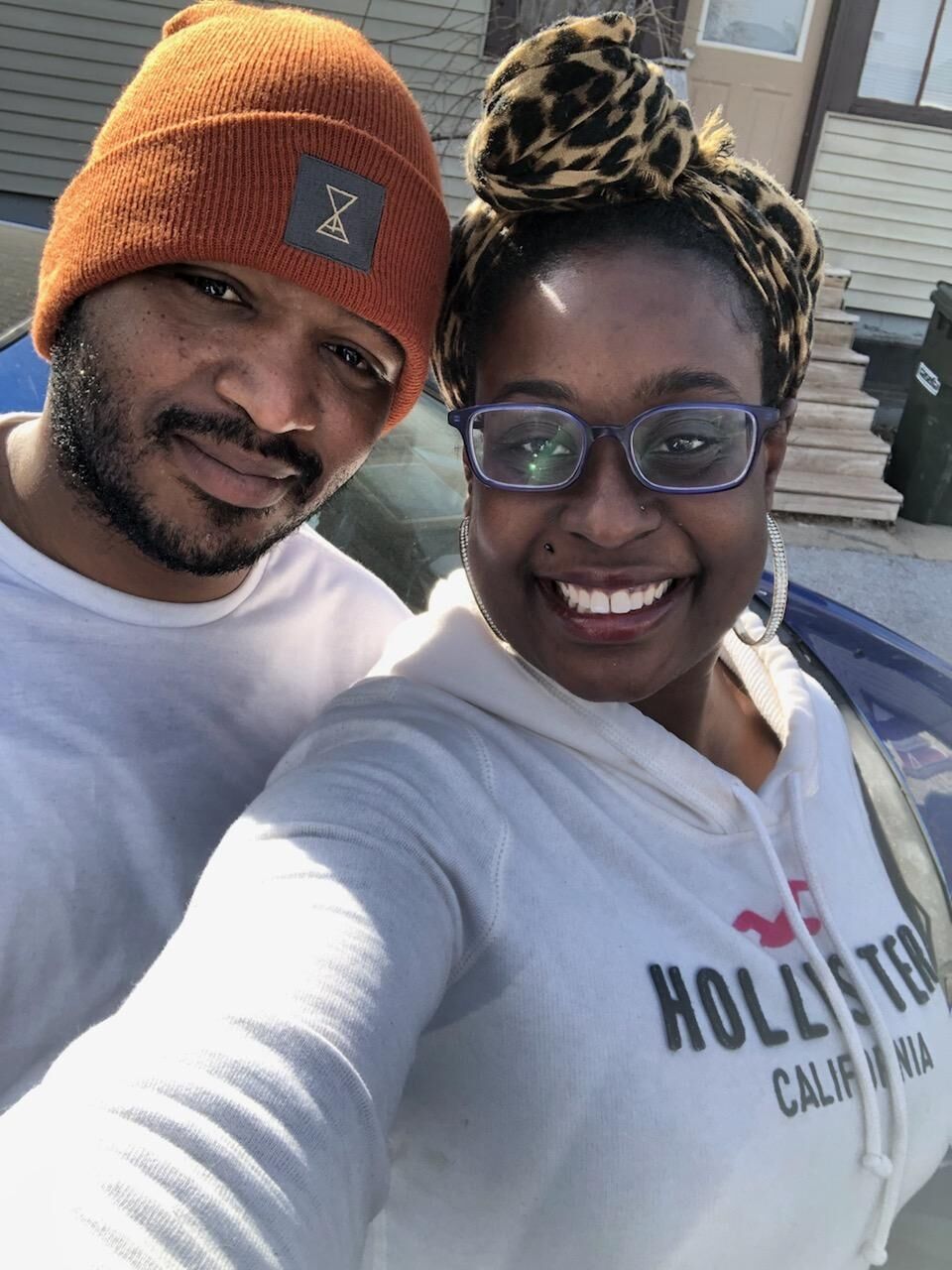 Ed and Erica McClain, owners of Hangry The Donut Bar, pose for a photo recently.l

A selection of Hangry The Donut Bar donuts are seen in this photo from the business’ Instagram account.

Ed and Erica McClain, owners of Hangry The Donut Bar, pose for a photo recently.l

Sometimes, the smell of warm donuts wafts up through to their neighbors as late as 10 p.m. Owners Erica and Ed McClain bake through the night and into the morning to fill the ever-increasing list of orders for their pastries.

Former Floridians and eternal foodies, the McClains started Hangry the Donut Bar one year ago, and their donuts stand alone on the spectrum. The yeast-raised donuts have a slight chew — similar to that of fried dough — but the inside is light with frequent air pockets making it the perfect vehicle for any of Erica’s sauces and glazes, including bits of candied bacon, Lucky Charms marshmallows, or her own homemade dolce de leche.

Save for their three readily available standbys — lemon poppyseed, vanilla bean and cinnamon sugar — the flavors rotate in and out and run the gamut of different fillings, such as cheesecake: a warm, whole donut filled with Erica’s custom cold cheesecake filling.

The McClains are deeply passionate culinary adventurers who regularly travel far and wide to fulfill their foodie cravings, even crossing the Canadian border for a donut fix.

“Ed said ‘Erica, they’re (immigrations officers) going to ask us questions, so don’t be weird,’” Erica said laughing. “I said ‘I’m not going to be weird.’”

The officer then asked the couple about the purpose of their visit into the country.

“We’re getting donuts!” Erica laughed. “Yeah, we got searched.”

Their food enthusiasm and standard for quality borders on obsession with flavors and recipes. They won’t even give away the ugly donuts — they’re simply not good enough to present.

“In the south, people talk about you if your food isn’t good,” Erica said. “It’s a real thing.”

And now their personal venture has somehow risen above the challenges of COVID-19 in its inaugural year, with the couple frequently selling out at pop-up events.

Erica’s idea to start a pop-up donut shop was inspired by NYC’s The Doughnut Project, famous for its wildly creative and unusual donut creations like their “Bronx,” which is black pepper and olive oil donut, and their house favorite, “Those Beetz are Dope,” a beet-glazed donut filled with ricotta whipped cream.

“I said ‘I could do this, honey,’” Erica recalled after sharing her haul of donuts with her husband post-trip. “We could do it as a little side project.”

“She probably spent a good three months spending god knows how much money on books and research,” Ed said. “Everything is made from scratch.”

The name, Erica said, comes from her and the occasional moments when food isn’t immediately available.

Using her unique, custom-blend of local and organic eggs, flours and ingredients, Erica hand-crafted her yeast-raised donut recipe over a period of several months while she and her husband worked full-time day jobs.

Initially, the start-up donut shop was supposed to premier their homemade pastries at a St. Albans St. Patrick’s Day event in 2020, before COVID-19 hit and the event was cancelled.

“We were like ‘What are we going to do? How is this going to work?’” Erica said.

After creating dozens of showcase pieces, Erica took to Facebook Marketplace and threw an ad up to try and sell the donuts that now had nowhere to go.

Today, the McClains have rearranged their kitchen to house Erica’s 19th-century baking table and after a long day at work they can sometimes be found proving dough and making toppings for orders to ship out the next day.

Their donuts range in price from $3 to $4 apiece, and they are exploring vacuum-packed shipping their products for their customers from Quebec City, New York, Maryland and beyond.

The pair are taking their success in stride and said they’re stocking up on restaurant equipment whenever they can to store away in preparation for their next venture: Hangry the Donut Bar food truck, a gourmet donut dispenser on wheels serving Erica and Ed’s custom creations — including savory donut sandwiches.

For now, Hangry the Donut Bar donuts can be found at Catalyst Coffee in St. Albans, Nomad Coffee in Warren, South Burlington and Essex, and Erica said sometimes custom orders can have them baking 20-dozen donuts on any given Saturday.

“I always make Ed tell people we’re sold out,” Erica said of her experiences at pop-ups. “I just hate to see the look on their faces.”