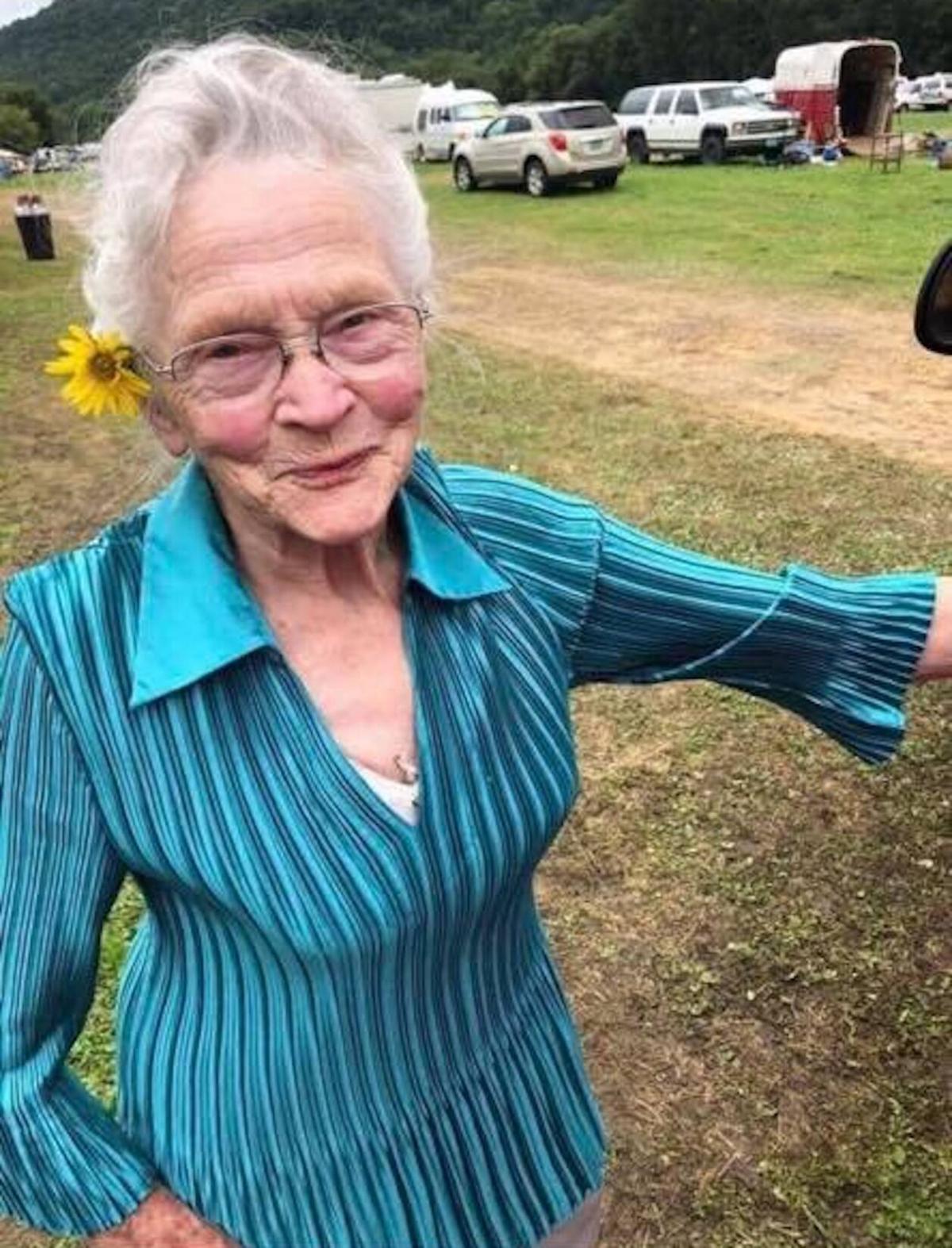 Annalou Kittell today. A parade will be held in honor of the 1949 Miss Vermont on Sunday in Enosburg. 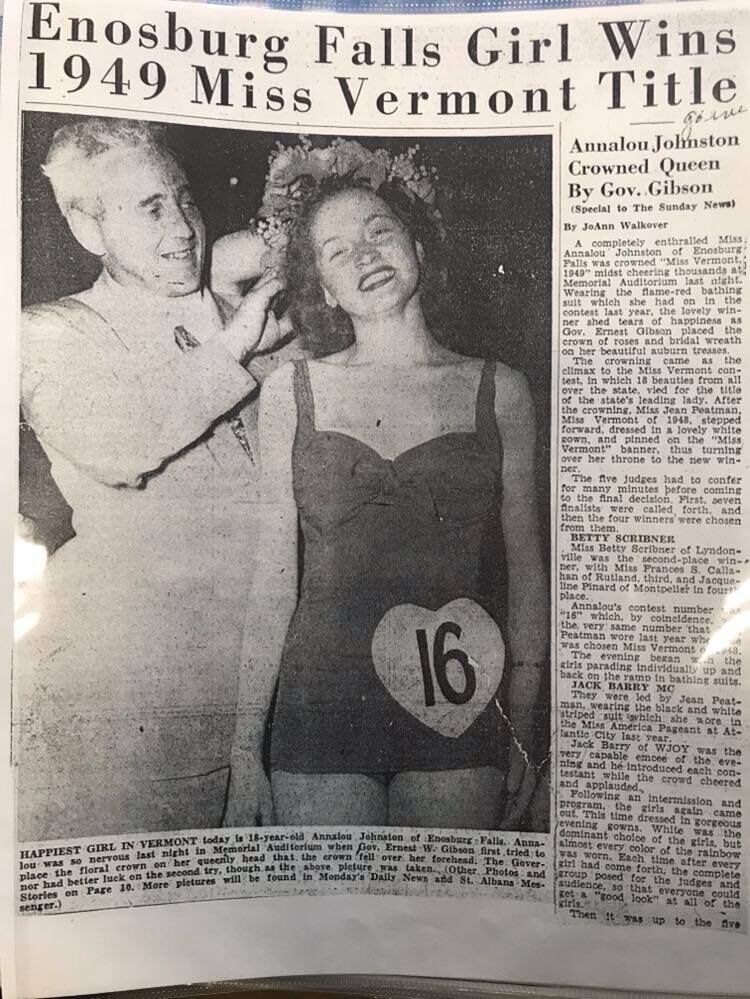 A Messenger article from 1949 shows Annalou Kittell as the winner of that year’s Miss Vermont pageant.

Annalou Kittell today. A parade will be held in honor of the 1949 Miss Vermont on Sunday in Enosburg.

A Messenger article from 1949 shows Annalou Kittell as the winner of that year’s Miss Vermont pageant.

ENOSBURG FALLS — Annalou Kittell is a local legend. At 90, she’s also about as humble a person as you’ll ever meet.

“My mother always said, ‘Lead a good life, ‘cause good or bad will follow you all the days of your life.’ Let me tell you that is true,” says Kittell, whose 90th birthday will be celebrated in style this Sunday with a parade beginning at the town park and ride at 2 p.m.

Born and raised in Enosburg, she was crowned “Miss Vermont” in the 1949 Miss America pageant.

“I was 18. Don’t ask me how it happened. That was a fluke. There were other girls more capable and beautiful than me,” she says.

It’s characteristic modesty that’s not new. Her entry was big news in Franklin County. But in an article, written at the time for The Messenger, Kittell is quoted as saying, ”I don’t see how I have a chance to win. Those other girls look awfully good. But I would not miss the experience for a million.”

She flew on to Atlantic City and Bermuda — which she calls a gift — and ended up in New York.

“But, like I used to say, there were a bunch of wolves, and I wasn’t into that, so I came back,” says Kittell.

She returned home to a hero’s welcome — a parade held in her honor. Kittell was called “As sweet as the maple sugar that is made in her state,” by one pageant official.

Reflecting today, she says jokingly, “Things have happened to me that I’ve never been deserving of. It must have been poor judges.”

On her return, Kittell went to nursing school, set on pediatrics, fell in love and got married. Her husband, who was in the army, served in the Korean Conflict.

“When he came back we moved to Connecticut where I continued working in pediatrics. I get love from young people. You know, it’s great to be wanted. And it’s nice that you can help someone along the way,” she said.

Kittell says that, when they moved back a few years later, her mother and father hoped that her husband would be able to take over the family farm.

“But that didn’t seem to work out for them. He wasn’t a farmer, he was an excellent mechanic and that’s how he ended up,” she said.

The couple’s garage on Main Street provided more lighthearted moments. Both Kittell and her husband Douglas learned to love classic cars. He would acquire vehicles, like a green ‘72 Cadillac, restore them and give them to her. As Kittell’s son Leigh tells the story, the couple also had two Irish Setters.

“She came out of the garage with the Cadillac and the dogs were in it. The old man had a hissy fit and said, ‘You cannot drive that car with those dogs in it.’ She said, ‘It’s my car, I’ll do what I want to.’ He said she couldn’t drive it. She said that she wouldn’t drive it without those dogs. They couldn’t come to an agreement. That car sat in that garage for about 20 years. Nobody won. Nobody lost,” says Leigh.

"Just try to lead a kind life. Don’t ask me why, I can’t understand after all these years, how people even know who I am and can remember me. It’s unreal. I mean I don’t deserve all this." — Annalou Kittell

Annalou chimes in, “Oscar and Shamus, well, my blessed husband didn’t want the dogs in that car because he had given it to me. Hey, that car’s interior is mint! There’s not a dog hair in it!”

Annalou, who is a strident lover of nature and counts among her current pets two house cats, two feral cats and a raccoon with no tail, says that she was driving when a calf fell off the back of a truck. She picked up the calf and brought it back to the house.

“That cow that fell off the back of the truck lived outside for a while,” says her son Leigh.

That’s when Annalou proceeded to bring it inside the house.

“When she came up the stairs, people going by stopped and said, ‘Is that woman alright?’” he says.

Through it all, Miss Vermont — who lost her husband in 1981 — has maintained a humble attitude and a clean lifestyle.

“I’m against alcohol and smoking is a definite trap. I lost my husband to a cigarette. Some people can smoke forever and their health is good and others can’t make it. I’m not for those things,” says Annalou.

While her kids were growing up, Annalou opened her house to others in town.

“When I was 10, kids from the village from 5 to 20 would come into the house all the time. Thursday was donut day and Friday was pizza. Everyone knew what day it was. She was always cooking for the neighborhood,” says Leigh.

Kittell also got into collecting.

“Antique collecting is the greatest hobby in the world and a garage sale is just more fun than going out to dinner,” she says.

Her son Raymond brings her to sales and has kept with the family tradition of refurbishing old cars and antiques.

On her 90th birthday, Annalou reflects on the secret to longevity: “You’ve got to keep your faith and you’re blessed if you have your health. Just try to lead a kind life. Don’t ask me why, I can’t understand after all these years, how people even know who I am and can remember me. It’s unreal. I mean I don’t deserve all this.”