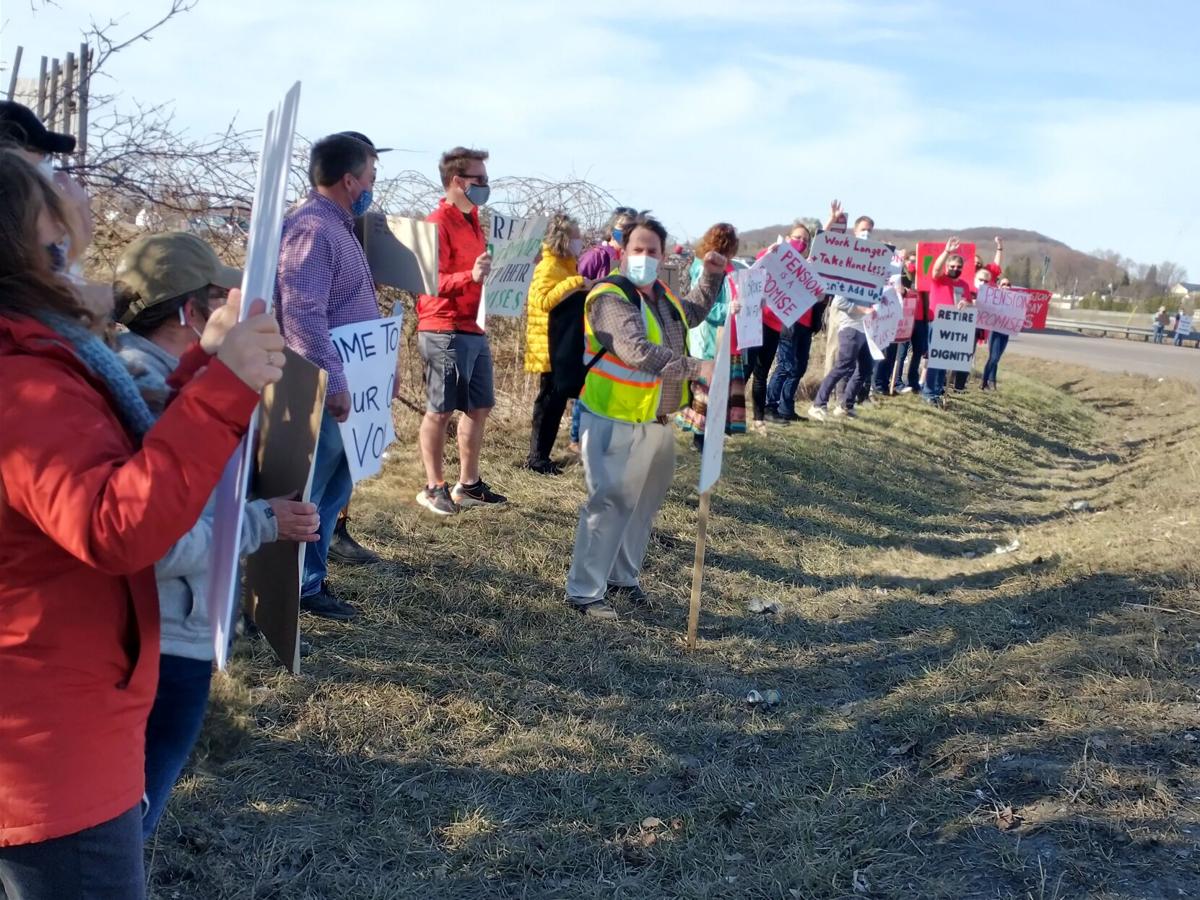 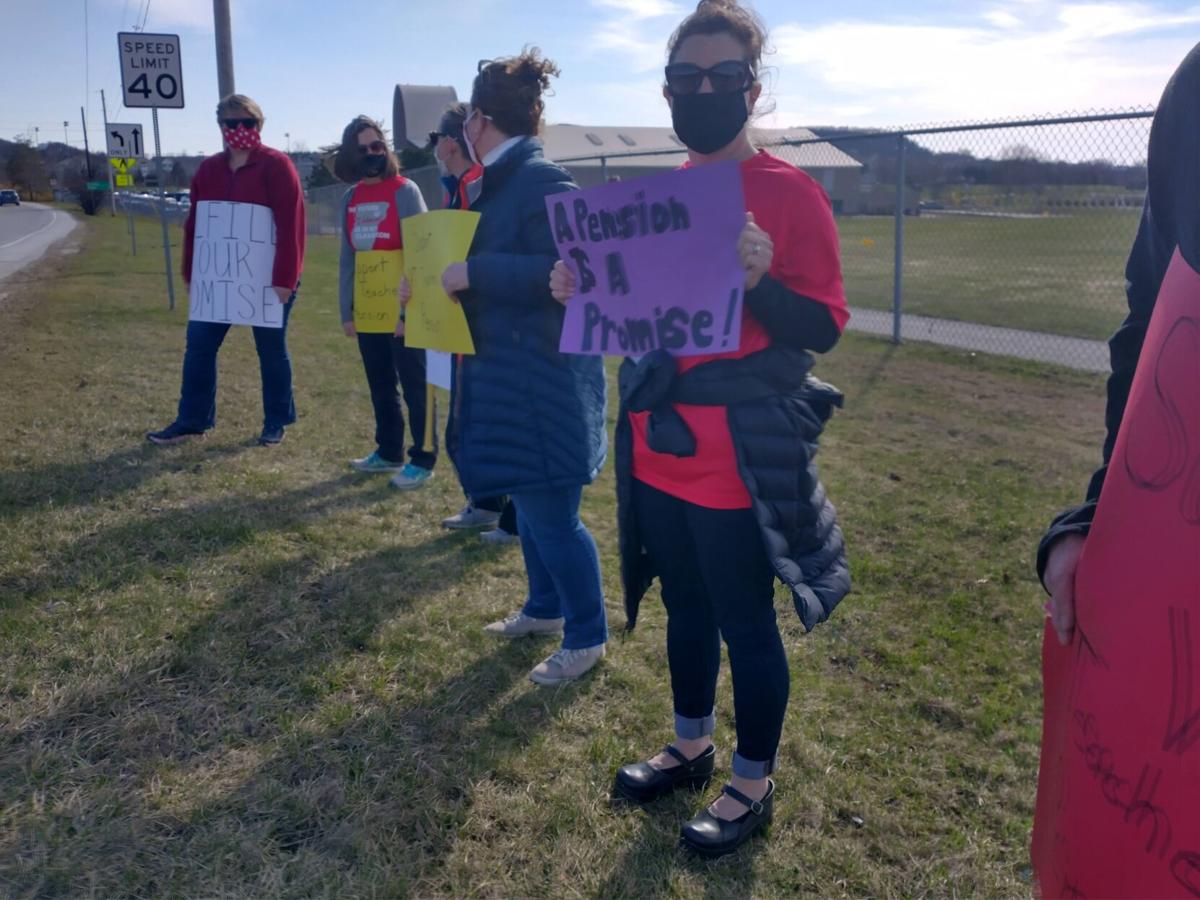 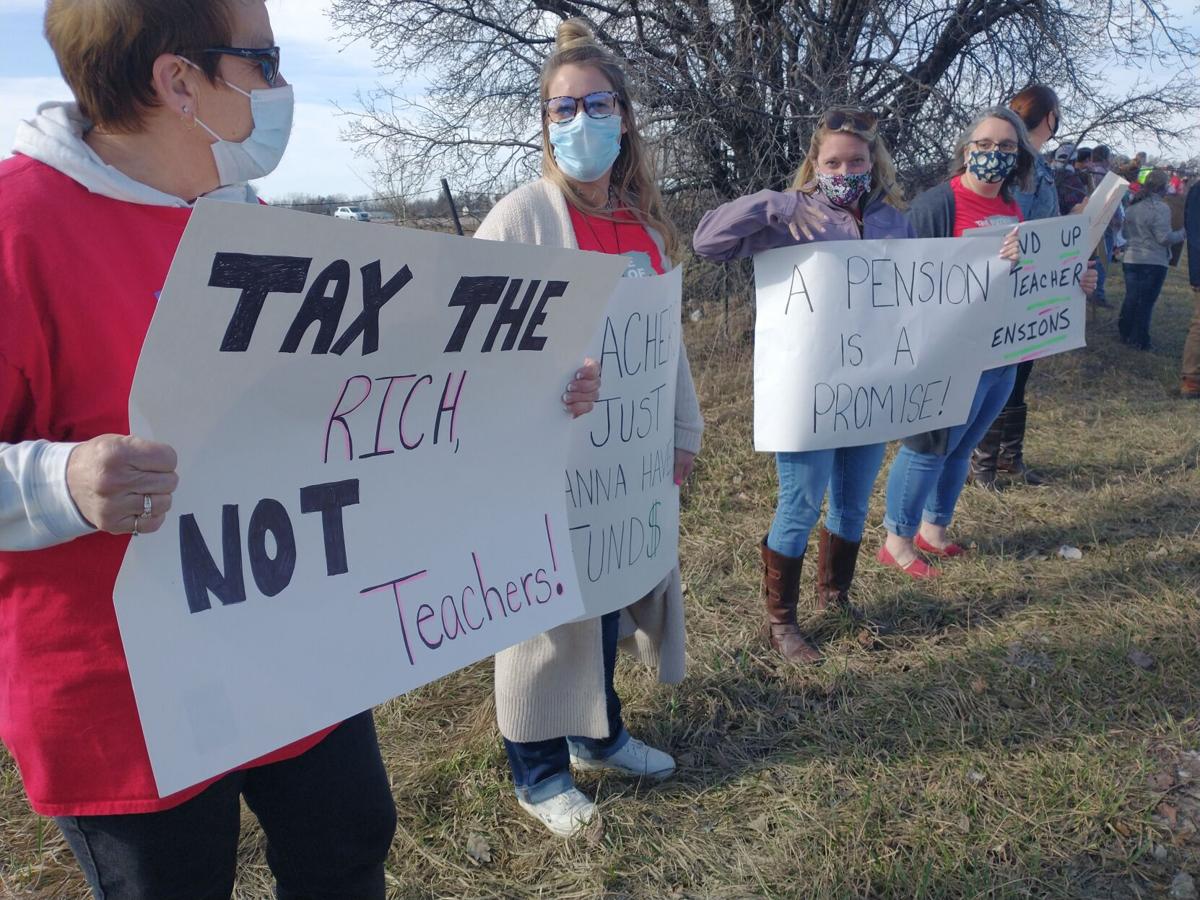 ST. ALBANS — Even the wind couldn’t blow them away. Over 100 educators and staff dressed in Maple Run red flocked to an intersection near the Collins Perley Sports Complex on Tuesday hoisting massive signs calling for legislators to drop a proposal that educators say would hamstring their pensions.

“We need to think of other ways,” said BFA St. Albans social studies teacher Mike Campbell. “They say ‘oh no, we can’t do a tax on the rich, the governor will veto it.’ Well, make him veto it! Make him stand up and say this is what he believes. Then when election time comes, Vermonters have a choice.”

Scores of educators lined the highway hoisting signs emblazoned with “Fulfill your promise,” “Vermont teachers deserve a dignified retirement,” and “Tax the rich, not teachers.”

Campbell expressed hope that pressure on the proposal would change the nature and contents of it as it made its way through the legislature. He stressed that educators had to be there every step of the way to stand up for the promise that was made to them when they agreed to be a teacher.

What’s in the proposal?

The proposal, which was submitted by committee Chair Rep. Sarah Copeland Hanzas, D-Orange, and Vice Chair Rep. John Gannon, D-Windham, does not apply to workers who are at or within five years of their retirement.

For everyone else, however, the proposal would increase base employee contributions toward retirement from 5% to 7.25% of gross salary for teachers, and increase the annual benefit on the average of an employee’s seven consecutive years of salary.

Currently, it bases it on the average of three consecutive years.

Additionally, the proposal would increase the pension vesting period to 10 years, up from the current five. The proposal also eliminates the possibility of early retirement at age 50 for educators with 20 years of service.

During a press conference Tuesday, Gov. Phil Scott said the proposal is a concept at this point, and gave credit to the House and the lieutenant governor for bringing the issue forward. He said the state’s current $5.7 billion unfunded liability due to the current pension system is a problem where “ignoring it isn’t going to make it go away.”

“We’ve seen the warning signs for decades and ignored them,” he said. “… It’s not sustainable the way it is right now. We spend hundreds of millions of dollars on this obligation, but we can’t keep up.”

What do local teachers think?

Campbell referenced the “much better” pension plans of bordering states, and said the passage of such a proposal could result in an exodus of Vermont’s teachers.

“We’re going to lose good teachers,” Campbell said. “They’re going to go where they can get a dignified retirement. So you’re going to see a migration out, and the veteran staff are going to leave out of fear.

“if you have people who have to work until they’re 67, you have budgets being broken, because they’re at the top of the pay scale.”

Campbell, who has been a teacher for 22 years, said new teachers sometimes bring in half the salary of veterans and can be considered desirable because of their lower paycheck.

Just like their energy, ideas and innovation, he said.

“This breaks a promise,” Campbell said. “When you can get a better pension system at the end of the years that you give to the community, you’re going to go where the best financial position is.”

With the proposed new regulations, Campbell said retired teachers would most likely have to get part-time jobs to survive.

“(Public service) is part of the fabric of what we are (as Vermonters),” Campbell said.

St. Albans Town Educational Center first- and second-grade teacher Lisa Curry recalled the additional efforts that teachers took to support and care for their students throughout the events of the past year, including quarantining multiple times at a moments notice and still find a way to reach and connect with her students.

“We want young people to go into teaching,” Biggie said. “This won’t do that.”

Lt. Governor Molly Gray issued a statement in support of educators, and called for further work to be done before a more developed proposal was considered.

“This proposal represents a broken commitment to our teachers and employees made at the time of hiring. Vermont’s teachers, in particular, have made extraordinary sacrifices during this pandemic, risking their health and safety to educate our children,” Gray wrote. “I am concerned that the proposal does not reflect the value we place on their tireless work, dedication and commitment.”

“We all know we’re never going to get rich teaching, but we’re going to make a middle-class income,” Campbell said. “Across the state this is going to lead to teacher shortages--what young person would get into this business that way?”