You are the owner of this article.
Edit Article Add New Article
Subscribe | Sign In
Home
News
Sports
Classifieds
Obituaries
Editorial
Business Directory
Things to Do
About Us
e-Edition
2020 Meet Your Business Community
2020 Resource Directory
NEWSLETTERS

WASHINGTON D.C. – Furlough notices have begun going out to U.S. Citizenship and Immigration Service (USCIS) employees, while the Trump Administration remains unable to say how many employees in Vermont may be furloughed. Sen. Patrick Leahy, D-Vt., has called on Senate Majority Leader Mitch McConnell and President Donald Trump to approve emergency funding for the agency.

The USCIS Vermont Service Center, which processes citizenship and visa requests, is based in St. Albans and Essex and employs 1,700 Vermonters.

According to Leahy, who serves as the Senate Appropriations Committee Vice Chairman, the White House Office of Management and Budget (OMB) still has not formally requested additional funding for the agency. USCIS itself has said it notified Congress in May of its budget woes.

USCIS previously announced that it will furlough 13,450 of its 19,000 employees as a result of a severe drop in visa applications. The agency is funded by the fees it charges for the applications it processes. USCIS said those furloughs will take place in August. Furlough notices began going out to employees on June 26, according to Leahy’s office.

Asked Monday if the state had any information on the number of Vermonters facing furlough, Gov. Phil Scott said that when local leadership at the center was asked, they didn’t know how many of their staff might be furloughed. That’s despite the fact that notices are already being sent to employees.

A Messenger request on Monday to USCIS for numbers of Vermonters facing furlough was met with virtually the same statement from the agency as was released two weeks ago.

In a statement issued to the Messenger Monday evening, Leahy blamed USCIS’s financial woes on “financial mismanagement and poor policy choices by the Trump administration” as well as the COVID-19 pandemic.

Leahy has written to OMB asking for a show of leadership and quick action on a fourth coronavirus relief bill. Legislators have discussed including emergency assistance to USCIS in that bill, should it ever happen.

In the letter, Leahy said he spoke with USCIS Deputy Director for Policy Joseph Edlow about the budget shortfall. Edlow told him informally the agency needed $1.2 billion to continue operations through the end of the calendar year and avoid furloughs.

The Senate Appropriations Committee has not received any requests from the administration for emergency funding, which Leahy called “a shocking failure of leadership.”

“Despite numerous calls from myself and Democratic leadership in the Senate, the White House and the Republican Majority refuse to move forward on a fourth coronavirus emergency supplemental appropriations bill where we could address this and other critical issues caused by the coronavirus pandemic,” Leahy wrote. “Majority Leader Mitch McConnell has publicly stated that he and the White House want to take a ‘pause’ before considering any further emergency legislation related to COVID-19, and has given no indication when that pause would end. This is irresponsible. Taking a ‘wait and see’ approach will only exacerbate the devastating effects of this pandemic, hurt the American people, and weaken our economy.”

Read the full text of Leahy’s letter below: 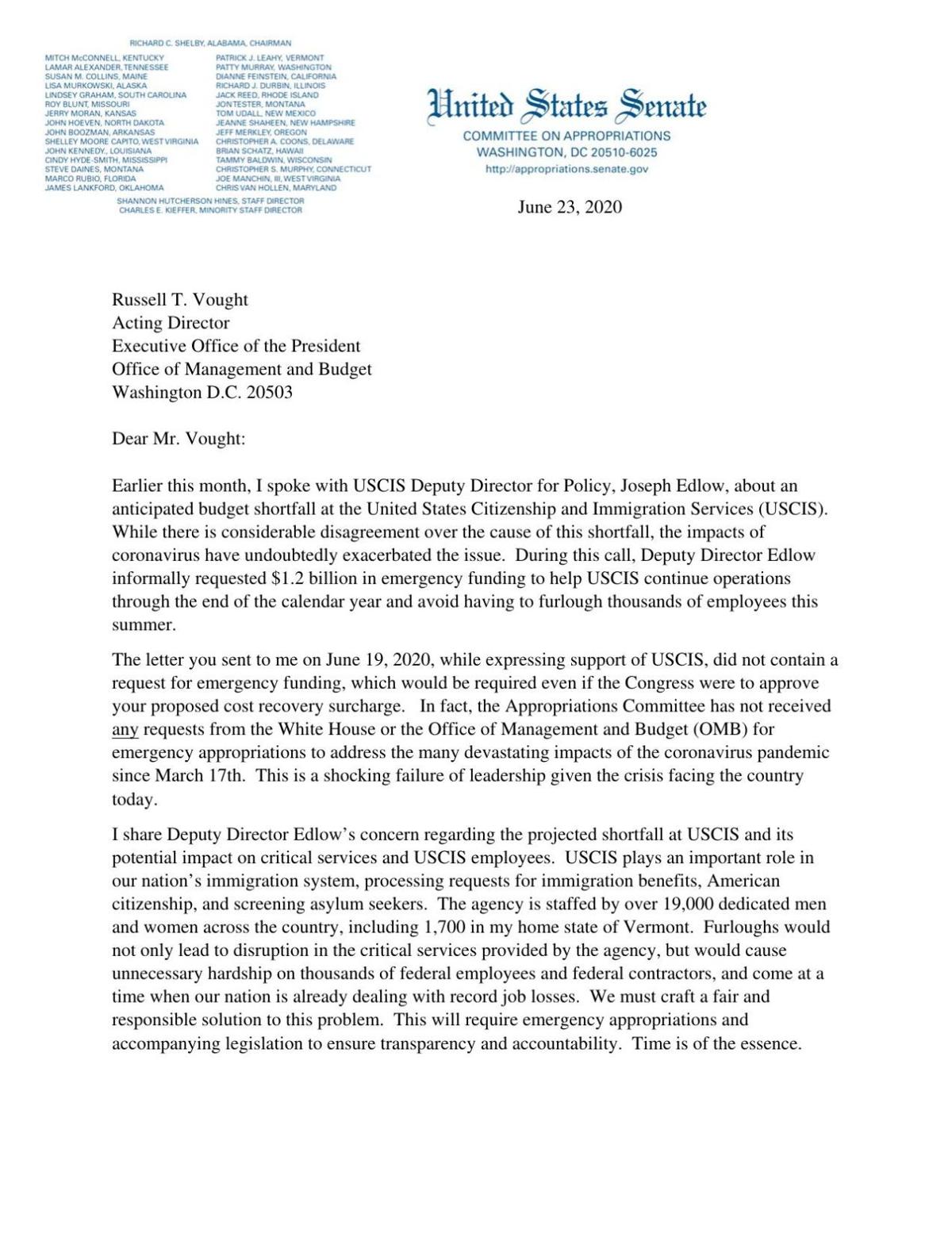