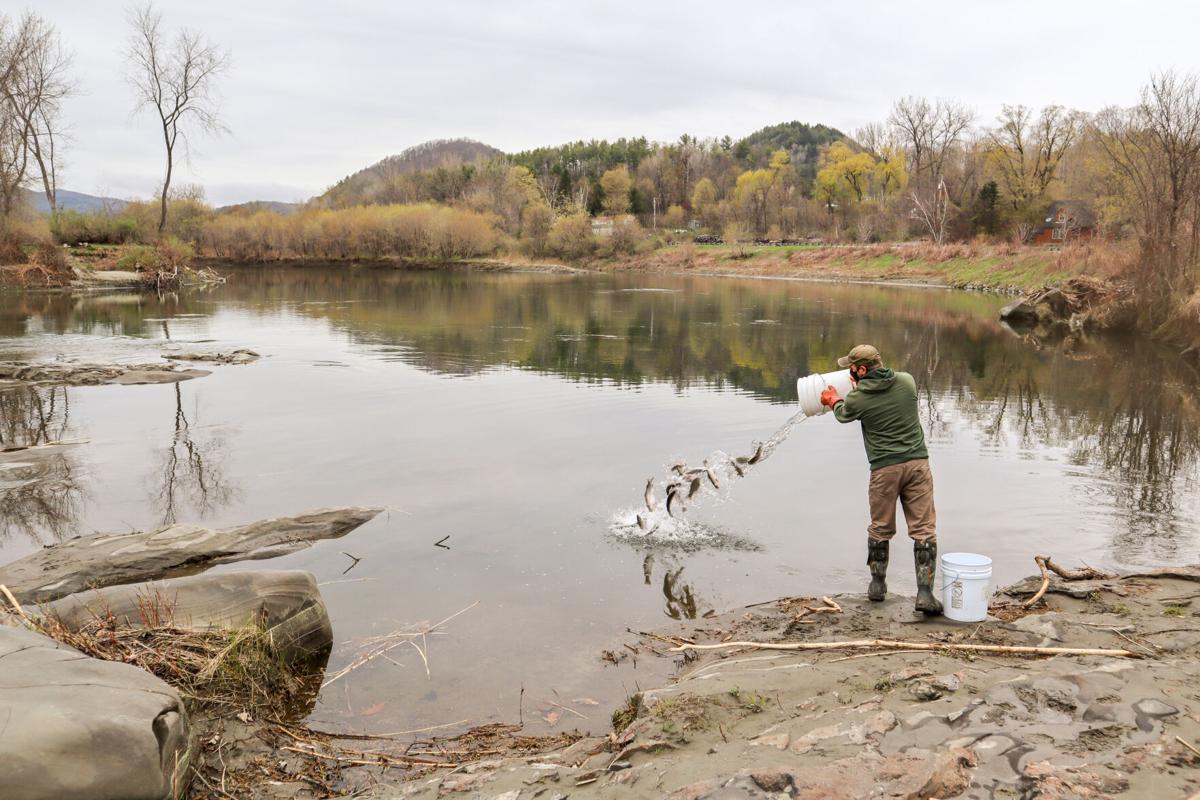 A biologist from the Vermont Fish & Wildlife Department stocks the Third Branch White River in Randolph. 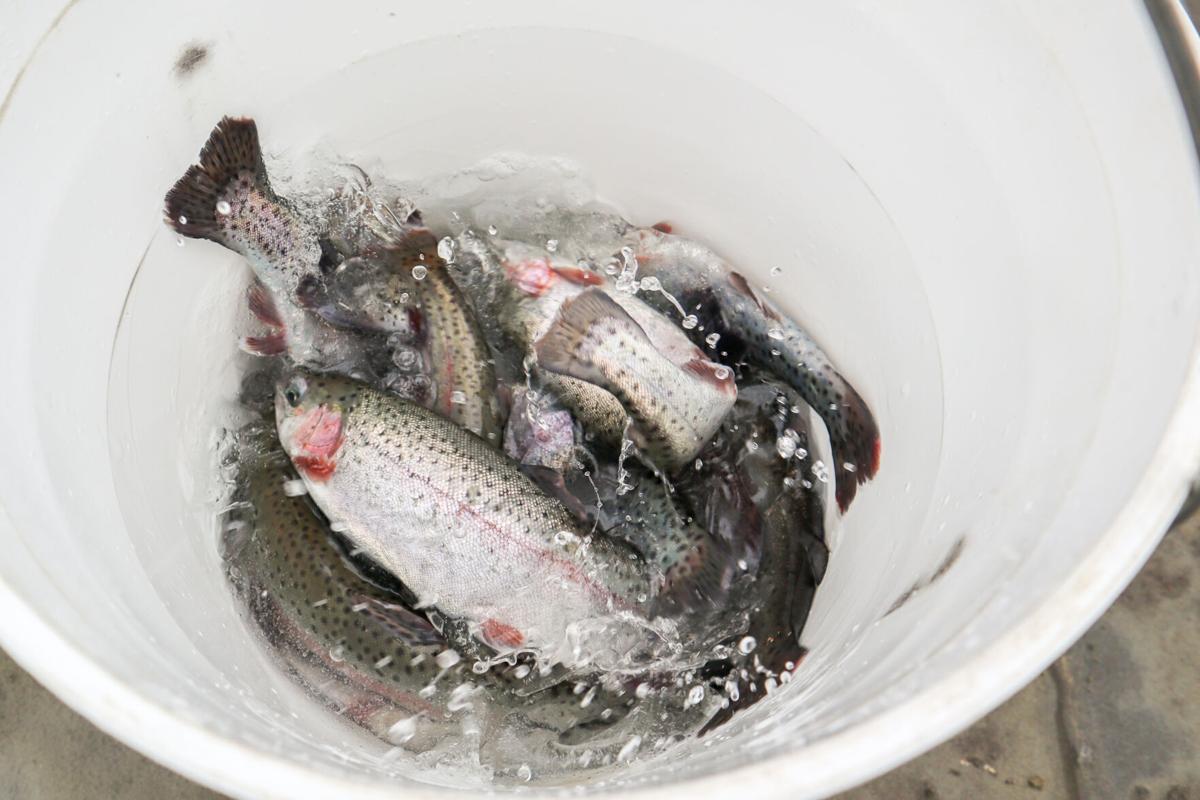 Trout wait in a bucket preparing to be put into a river in Randolph. 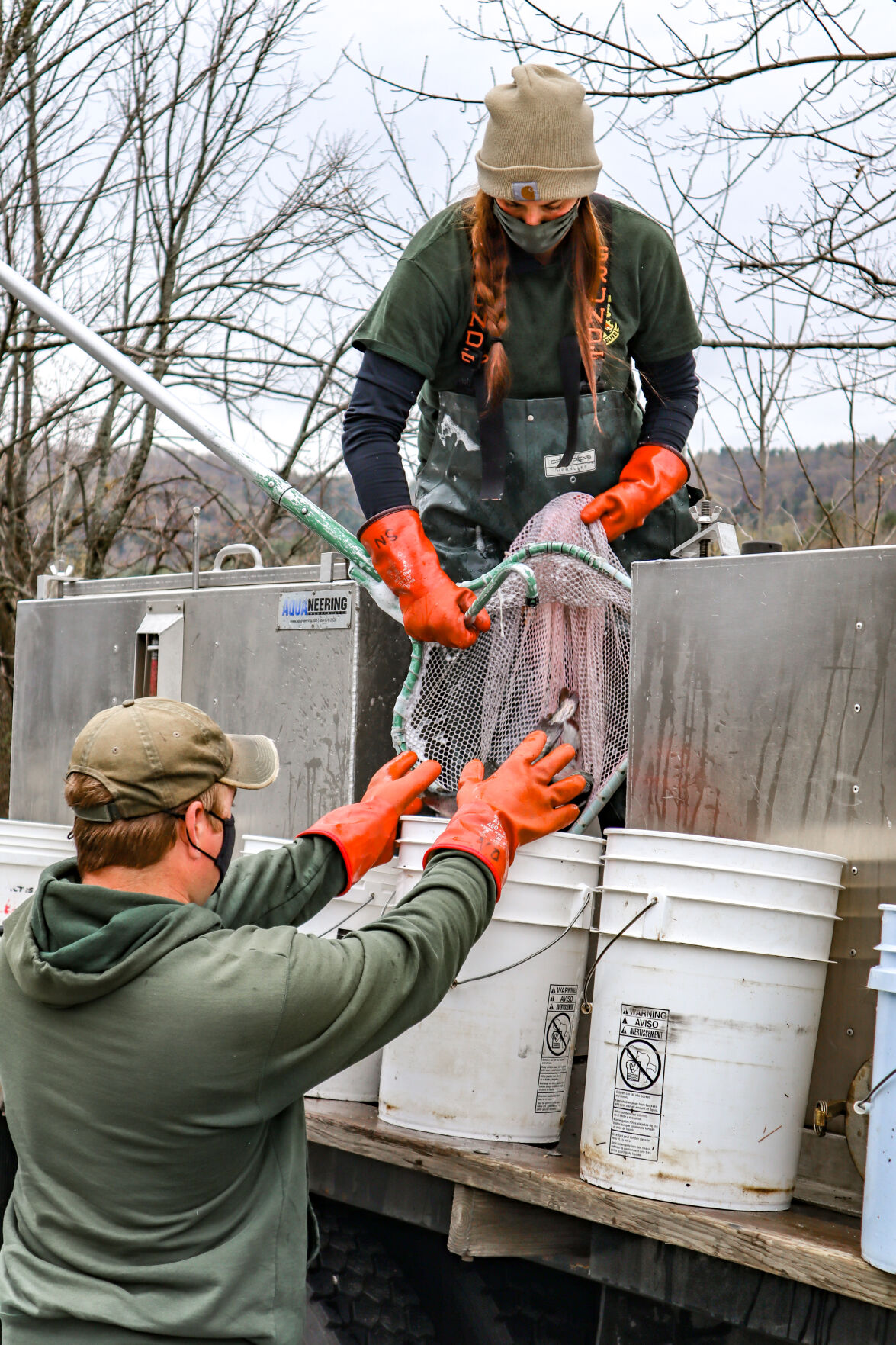 Biologists from the Vermont Fish & Wildlife Department prepare fish to be put into the Third Branch of the White River in Randolph.

A biologist from the Vermont Fish & Wildlife Department stocks the Third Branch White River in Randolph.

Trout wait in a bucket preparing to be put into a river in Randolph.

Biologists from the Vermont Fish & Wildlife Department prepare fish to be put into the Third Branch of the White River in Randolph.

ENOSBURG FALLS — It’s spring in Vermont and that means the Vermont Fish & Wildlife Department (VFWD) is amping up fish stocking throughout the state.

Lee Simard, a fisheries biologist with the VFWD, says this year’s plans are to stock 654,000 fish in Vermont waters.

The department also stocks walleye fingerlings into Lake Champlain and other inland waterbodies, but because of how they are cultured, an exact number isn’t known ahead of time.

“That might be what brings the estimate closer to one million fish but I’m not certain about that,” says Simard.

“We stock these trout in locations that we then anticipate anglers to catch and potentially harvest and, if they’re interested, harvest out of those areas. Just to create those fishing opportunities. Not to restore a natural fish community in that area,” he says.

Simard says Vermont is very fortunate in that most of the trout fishing opportunities in the state are wild trout.

“Looking at the number of miles of river that we stock for instance is very, very few relative to the huge number of miles of streams and rivers in the state that have wild trout populations,” he says. “It’s only these handful of other rivers and streams that don’t have the habitat conditions to support these wild populations that we then stock trout into.”

There are currently five fish culture stations in Vermont that produce more than 1.5 million fish annually for distribution to Vermont’s lakes and streams.

What is a good habitat?

Diverse – riffles, pools, variety of depths, velocities and substrates. Trout species and lifestages differ in habitat requirements. A diversity of habitats is required to meet these needs.

Forested riparian areas provide stable streambanks, large wood recruitment to stream channel that creates complex habitats for fish and other aquatic life, organic matter recruitment that is a source of food/energy in stream systems, retention and filtration of run-off from farms and other nutrients, sediment and other pollutants before reaching surface waters

Messy – boulders, fallen trees and organic matter are all part of good habitat. Uniform channels with neatly manicured lawns to the edge may be attractive to some, but is poor trout habitat.

Dams and thousands of impassable culverts within Vermont's stream network are barriers to trout movement.

In determining stocking locations, trout species and densities biologists consider the existing fish community, angler use and public access to ensure they’re making effective use of the fish while minimizing competition with wild populations.

Brook trout are Vermont’s only native stream-dwelling trout. In addition to their inability to tolerate water much over 68 degrees, Simard says they also don’t compete well with introduced fish, particularly perch, bass, and rainbow and brown trout.

This inability to compete, combined with their requirement of cold, clean water, has relegated most wild brook trout populations to headwater streams and a few medium-sized rivers. Lake and pond populations are even more limited.

“We anticipate that after mid-summer and later summer when water temperatures heat up in these streams, whatever fish are still there are likely to not survive and so we don’t want to put more trout in than the anglers in that river demand,” he says.

New York resident Justin Foley is visiting friends in Enosburg when he decided to go for some early season angling along the Winooski River. Foley hasn’t caught anything yet but hopes the clouds will help.

“It’s pretty chilly and has been sprinkling but I’m hoping. I had to quarantine, so I think I deserve something out of that,” he says with a laugh.

After waiting a short time he feels a tug on the line. “Let it be something other than small!”

While Fish and Wildlife says water temperature is single most important factor limiting wild trout, they also recommend habitats that are diverse, complex, messy and connected.

“The next most important thing is in stream habitat. So, making sure there are either trees or rocks or other things in the stream channel that we like to say makes the stream messy,” Simard says.

Simard says that people sometimes think a clean looking stream is best but from a fish perspective, a stream that’s littered with downed trees, rocks and boulders is better.

“A line we like to say is ‘fish grow on trees.’ If you don’t have trees or other habitat features in trees you likely aren’t going to have a good fish population.,” he says.

This year the agency plans to stock 10,300 two-year-old fish or “Trophy Trout” in streams and 8,850 in lakes and ponds across the state. Most of the trophy trout will be rainbow trout but there are a few locations where brown trout will also be stocked.

“You could figure in the 15- or 16-inch range plus or minus a few inches to be expected, especially for the Rainbow Trout,” Simard says.

On a personal note, Simard who grew up in Swanton and attended the University of Vermont, says he’s not the best angler but is not opposed to casting out his line.

“The biggest fish I’ve probably caught is the northern pike. It’s about 36 inches but then I’ve also caught some big bass. I’ve caught an 18-inch Brown Trout.. It doesn’t mean it’s not fun to still go out and try,” he said.

On the other side of the river, Foley is still reeling in his line. A small fight reveals something other than a trophy. He begrudgingly throws it back and packs up his tackle box.

“Guess it’s not my day. Hopefully I’ll get another chance. The big guys are out there,” he says.