HIGHGATE — On Tuesday, Jason Gagne drove a side by side ATV through the reddening sugarbush — his son Nick, dog Bailey and this Messenger reporter all bounced along for the ride.

As part of the statewide Maple 100 event, the Gagne family is inviting Vermonters and tourists alike to take a tour of their sugarbush this weekend in Highgate.

Offering hayrides to the sap lines, maple tastings and tree identification activities from 10 a.m. to 5 p.m. is all new for the Gagnes, whose business is not typically so retail-forward.

“We had a couple visit from California last weekend,” said Gagne, who is also the treasurer of the Vermont Sugarmakers Association.  “They couldn’t believe how far back into the woods the sap lines go.”

Maple 100 is a collaboration between the Vermont Agency of Agriculture, Food and Markets, the Vermont Department of Tourism and sugarmakers around the state.

Events are occurring as far north as Highgate and Newport and as far south as Brattleboro, the goal being to extend interest in maple to fall leaf peeping, when tourists are out in full-force.

“Nobody wants to visit in mud season,” Gagne said, speaking of the early spring months when syrup is produced in sugarhouses. “That’s when the state experiences the least number of tourists, so the Ag department suggested we move our open houses to the fall.”

Scott Waterman, communications and policy director at the Agency of Agriculture, told the Messenger this is the first full year of the event — its inaugural in 2020 much smaller due to the COVID-19 pandemic.

Even though Franklin County produces more than half of Vermont’s maple syrup output, Gagne Maple is the only sugarhouse in the county participating in Maple 100 this year.

“We’re not your average sugarhouse. I’ve got my father here and my family, we like to bounce ideas off each other, talk about what we can do, be innovative.”

In early March 2020, Gov. Phil Scott stood in the snow to tap a tree at Gagne Maple with a group from Highgate Elementary School. He lifted up the smallest students, helping them to see the sweet golden goodness flow into the bucket.

The governor told the Messenger at the time that he was impressed with the Gagne family’s ingenuity: cleaning up the forest in the off season, utilizing wood chips and installing vacuum sensors.

“They produce a great product, a very light, very sweet syrup — the best of the best,” Scott said. “We’re very proud of them and appreciative of them to host us here today.”

His father Fernand and uncle Raymond continued to work the evaporator and the filter.

The Gagnes have been producing maple sugar for five generations, and to make the most of their 350 acres and approximately 22,000 taps, the family is committed to utilizing best practices and constantly improving.

“We’re not your average sugarhouse,” Gagne said. “I’ve got my father here and my family, we like to bounce ideas off each other, talk about what we can do, be innovative.”

Not long ago, the Gagnes started using wood to fuel their evaporator, the stainless steel pan that boils sap until it becomes maple syrup. More recently, they switched to wood chips, a more sustainable and cost-friendly option. The family chips the wood themselves in the fall from trees on the property.

When thinning out the forest in the off season, Gagne has learned it’s best to gather the unused, top branches of trees into piles, creating natural homes for chickadees and for rabbits. He enjoys seeing the wildlife when he’s out walking the lines.

Like other modern sugarhouses, Gagne Maple uses vacuum sensors to remotely monitor vacuum levels in each line. With an app on his phone, Gagne can see if a squirrel, for example, has punctured a tube out in the sugarbush.

Coming soon for the Gagnes will be a brand new storage facility for maple syrup. Currently, the family can store half a year’s worth in the sugarhouse basement. The new, climate-controlled building will be large enough to hold not only an entire year of Gagne Maple, but some syrup from neighboring sugarmakers as well.

Gagne said he enjoys staying up on the latest science from University of Vermont’s Proctor Maple Research Center, which shares best practices with sugarmakers and helps develop new technology.

“We’re very lucky to have them,” he said. 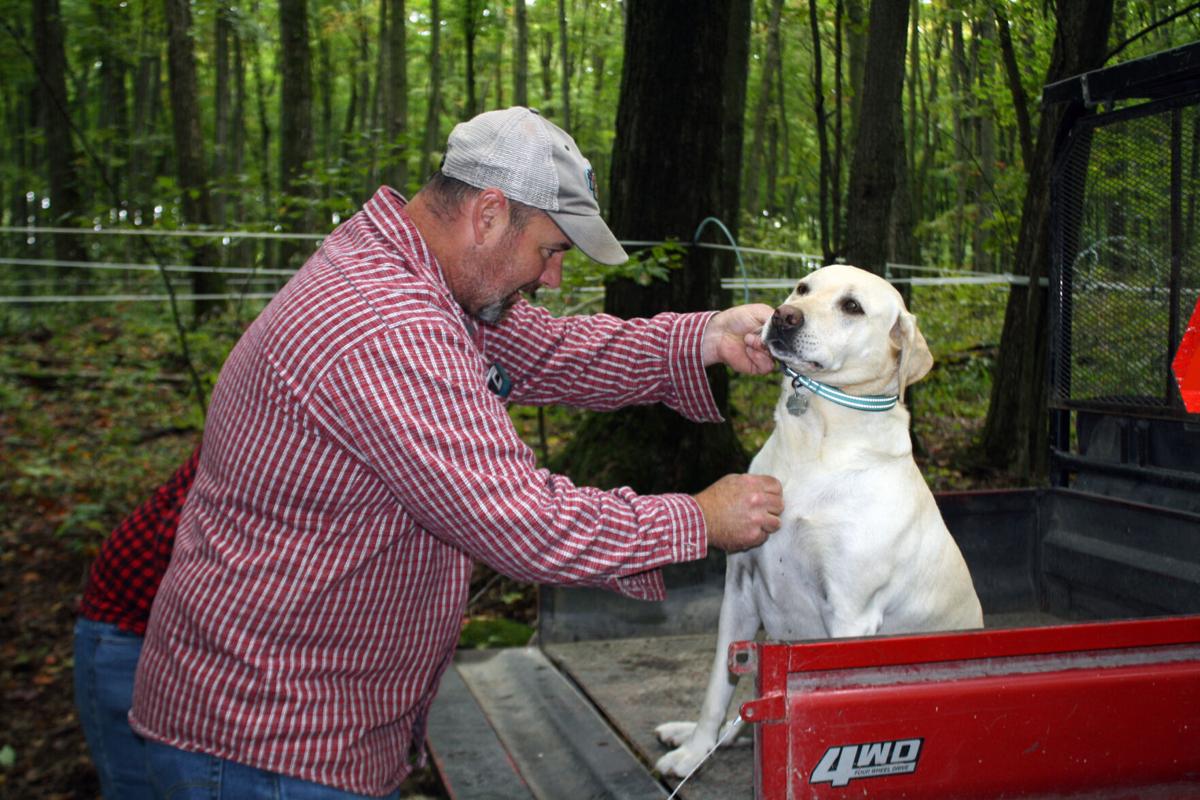 Jason and the family dog, Bailey. 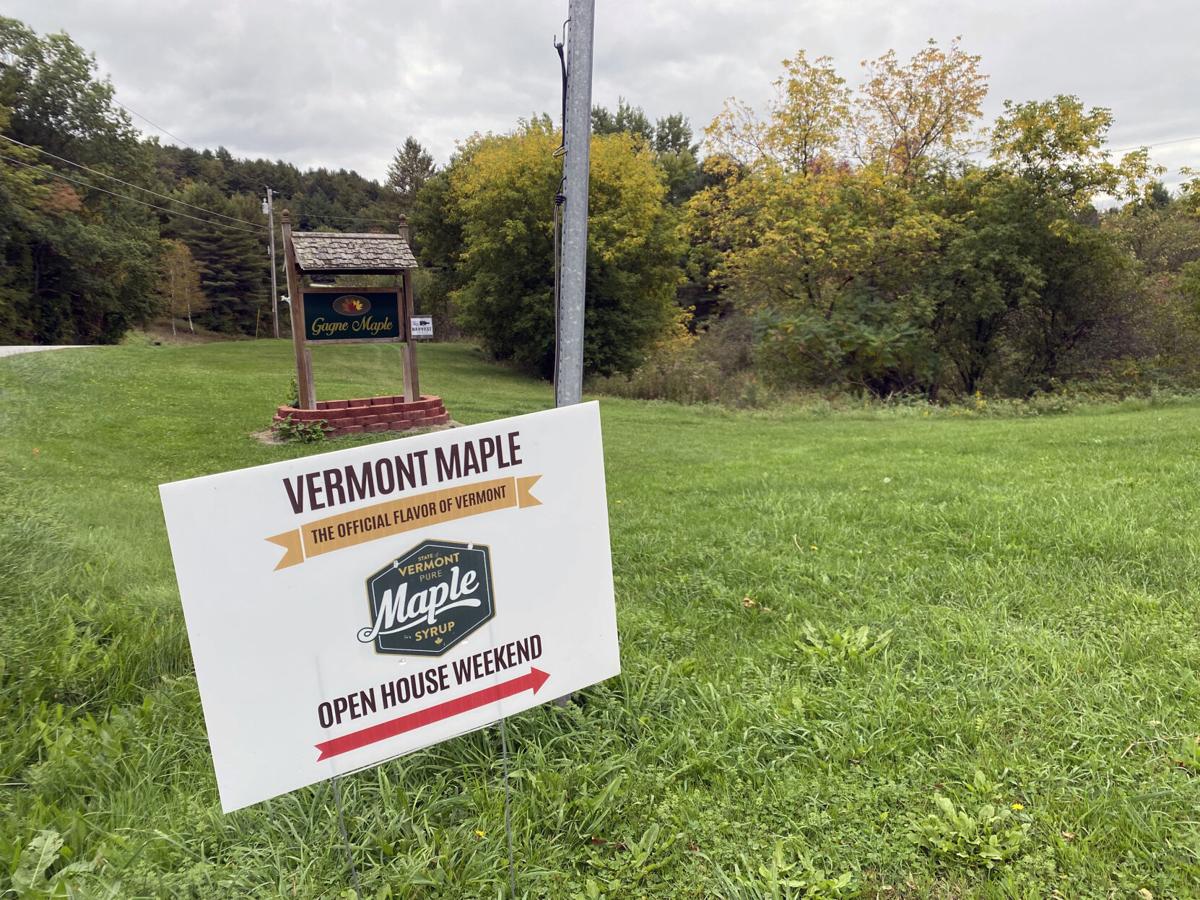 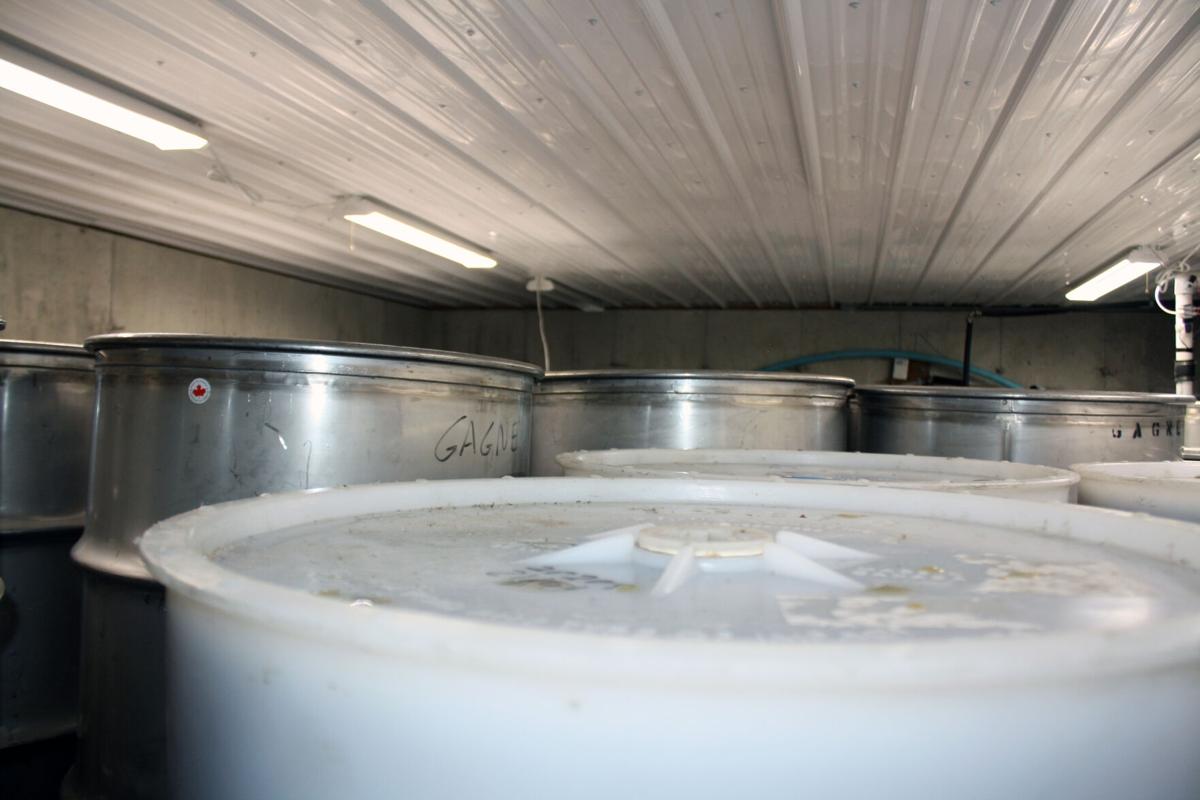 The Gagnes' current storage area holds only half a year's worth of syrup. A new facility will store an entire year of production. 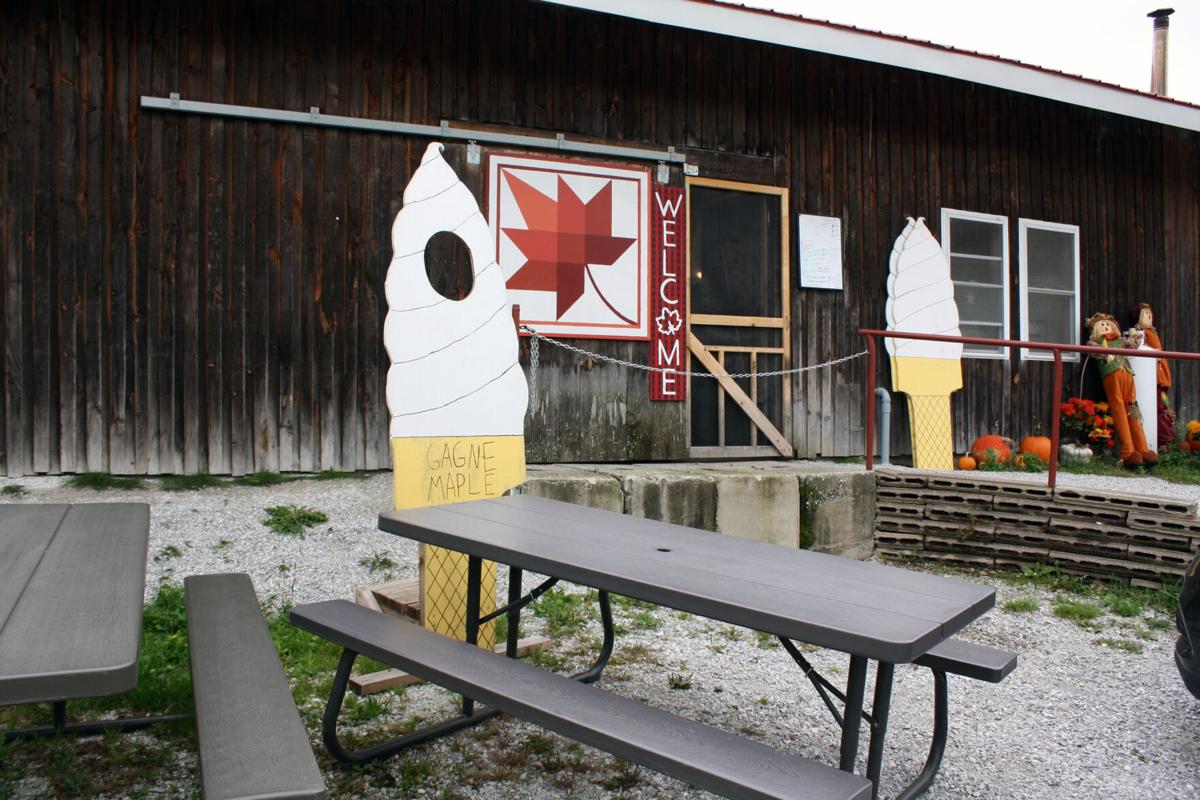 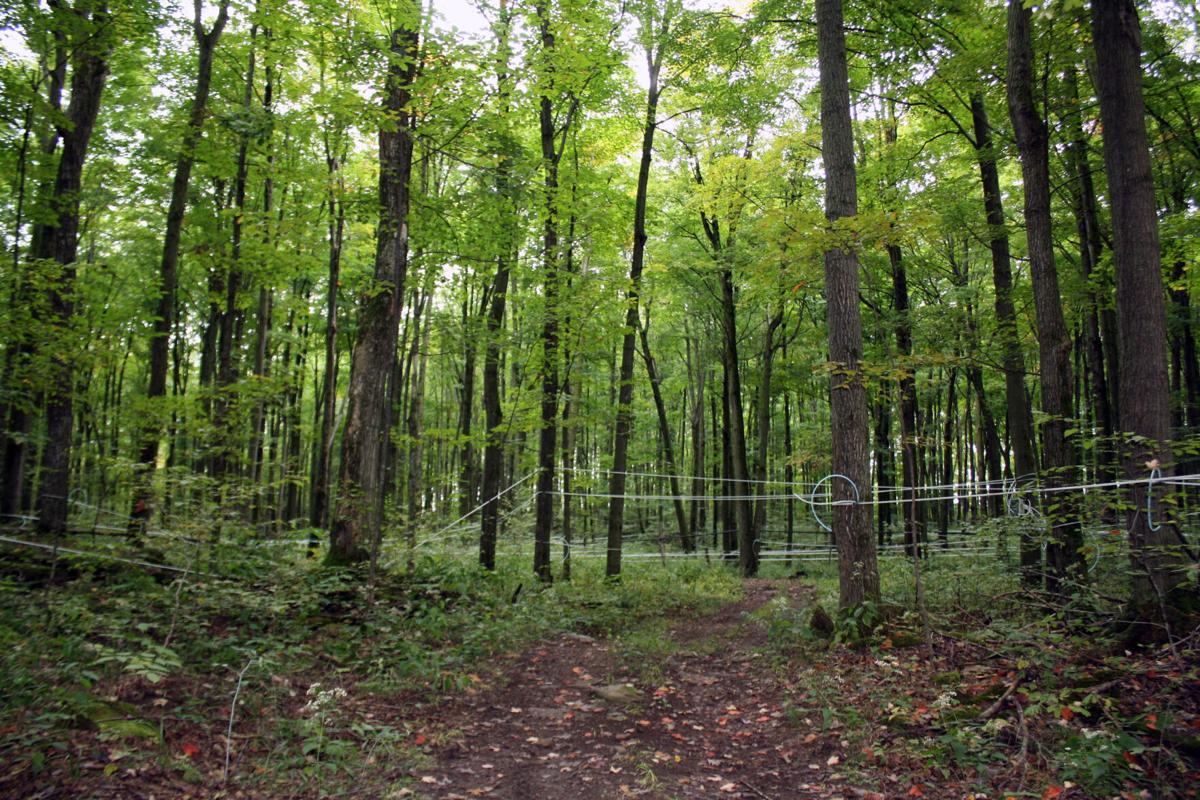 Gagne Maple has 350 acres of forest, including approximately 22,000 taps. 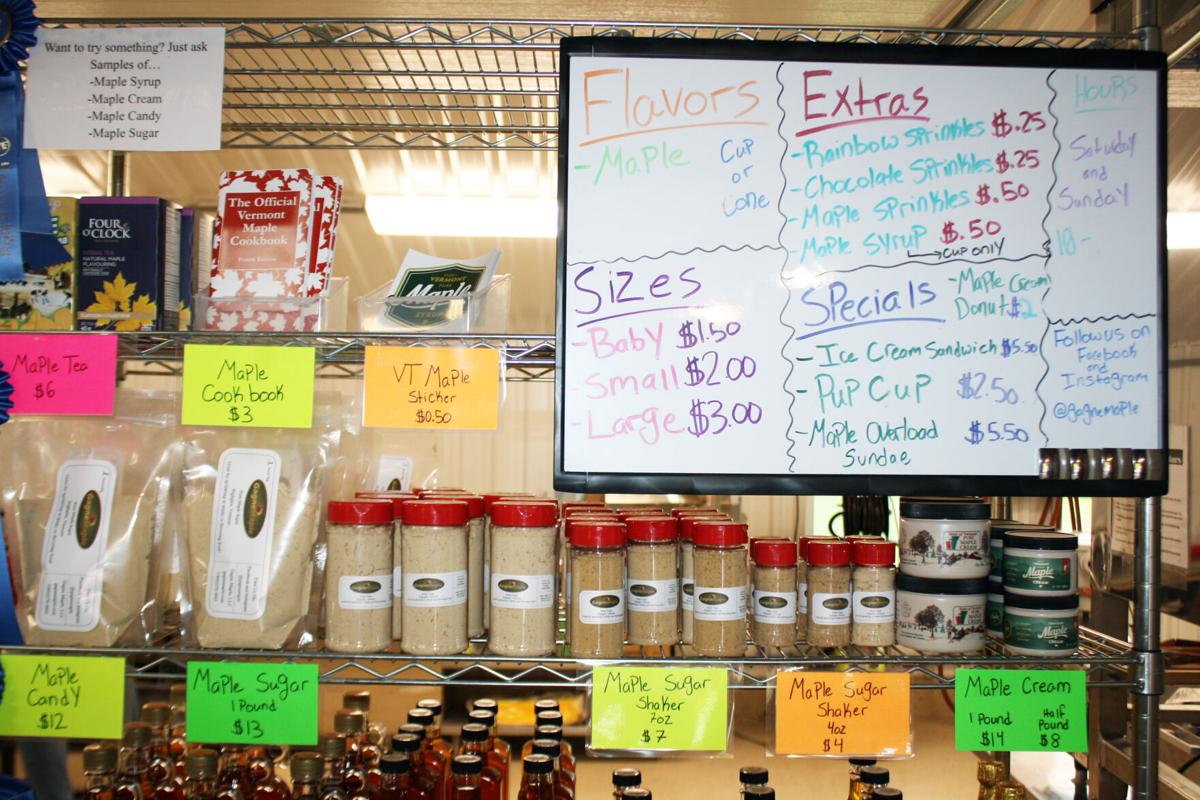 Abby Gagne has organized the family's display of maple products. 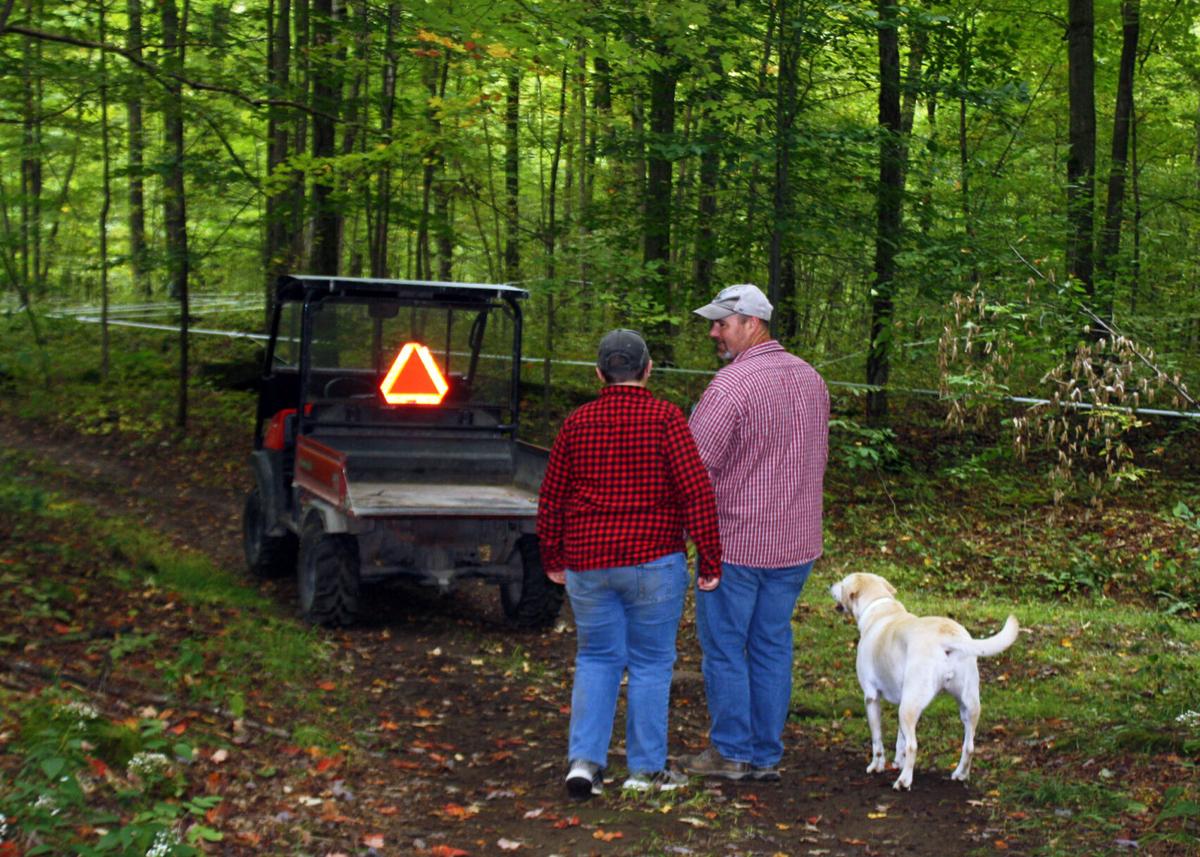 Nick and Jason Gagne and their dog Bailey walk among the sap lines Oct. 5. 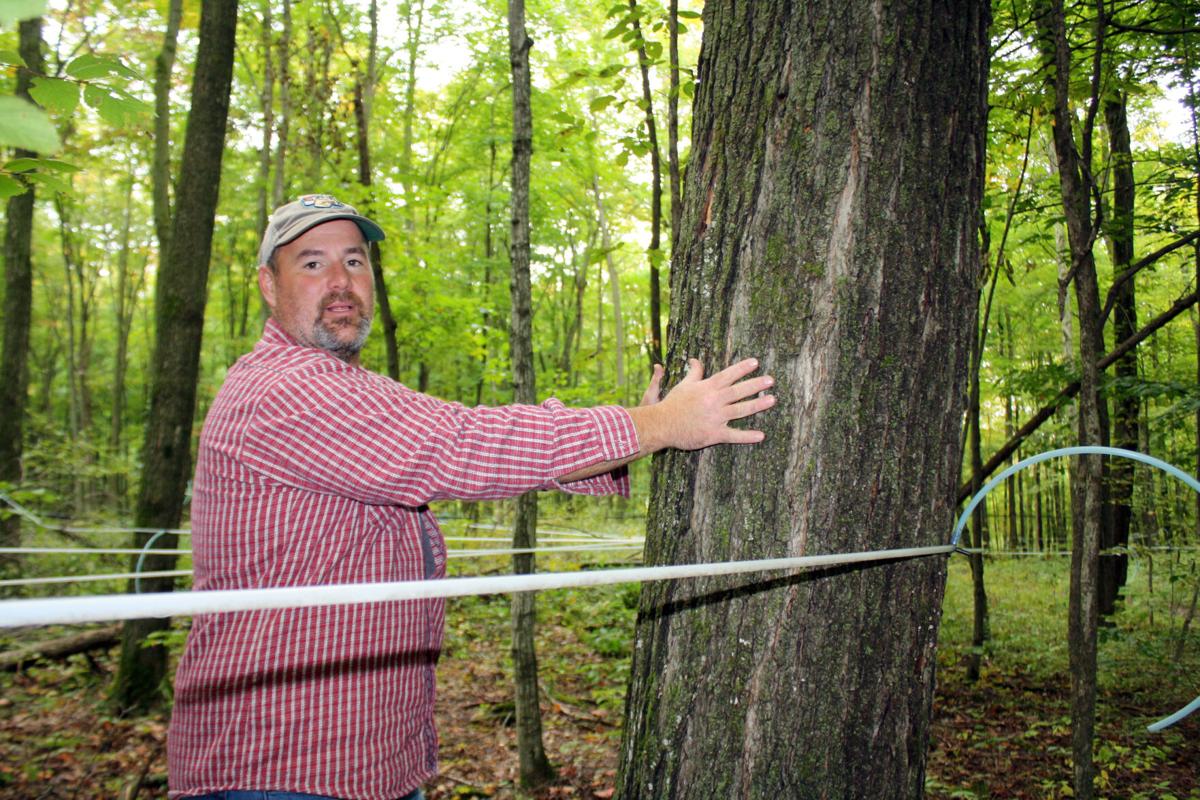 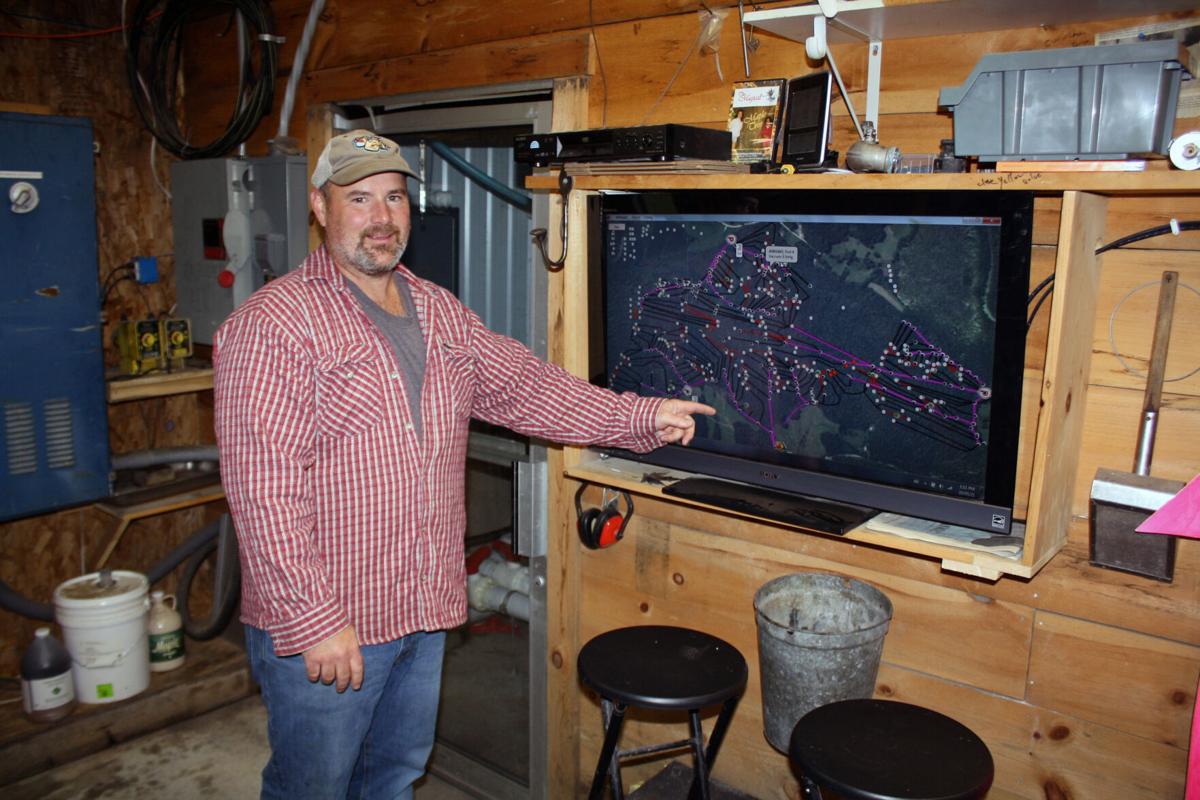 Sugarmaker Jason Gagne points to a map of his forest.

Jason and the family dog, Bailey.

The Gagnes' current storage area holds only half a year's worth of syrup. A new facility will store an entire year of production.

Gagne Maple has 350 acres of forest, including approximately 22,000 taps.

Abby Gagne has organized the family's display of maple products.

Nick and Jason Gagne and their dog Bailey walk among the sap lines Oct. 5.

Sugarmaker Jason Gagne points to a map of his forest.

Gracefully steering the side by side around a wide bend in the field, Gagne said when Vermonters returned from World War II, many left the farms and found better-paying work in manufacturing.

In the 1960s, people came back because dairy was booming — until it wasn’t. Many Vermont dairy farmers then transitioned to sugaring, their properties already containing acres of forest.

“When you’re going around, you’ll find sugarmakers who’ll say, ‘my dad was a dairy farmer, or my uncle, or my great-grandfather,’” he said. “Dairy is a 24-hours-a-day, seven-days-a-week job. At least in maple, we say we can sleep in May.”

This history is important to Gagne, who keeps generations of sugaring tools, like spouts and augers, on display in the sugarhouse. On the same wall, he’s kept track of the heights of his four children over the years.

Gagne is also fiercely protective of his trees, which take decades to grow the nine-inch circumference needed to be tapped.

Amongst the changing leaves on Tuesday, he stood with his hands on the bark of a towering maple, speaking of its anatomy as if it were a human body. The hole for the spigot should be drilled once and precisely, he said, so as not to create more wounds than necessary.

“I want these trees to be here long after I am gone,” he said.

“For an industry that has to contend with Mother Nature, we’re doing pretty good."

In the woods, the sap lines weave and interlace like a dreamcatcher, a lattice of plastic tubing that carries the precious sap back to the sugarhouse for boiling. It’s quiet out there, save for the crunch of leaves underfoot and the patter of squirrels.

Back inside, visitors have the opportunity to try Gagne Maple syrup, a smooth liquid gold. A spoonful of maple cream and a hunk of maple sugar are also served.

Earlier this year, when Abby Gagne, Jason’s daughter, was looking for a summer job, he bought her a creemee machine, which she used all season long to sell maple goodness on a sugar cone.

Gagne enjoys giving tours of the property, though it’s finding the time for it that is challenging. His son Nick laughed and said talking about sugaring comes naturally to his dad.

The family predicts a good sugaring season this spring —  the leaves of the maples look good, and the trees got enough moisture this summer.

“For an industry that has to contend with Mother Nature, we’re doing pretty good,” Gagne said.