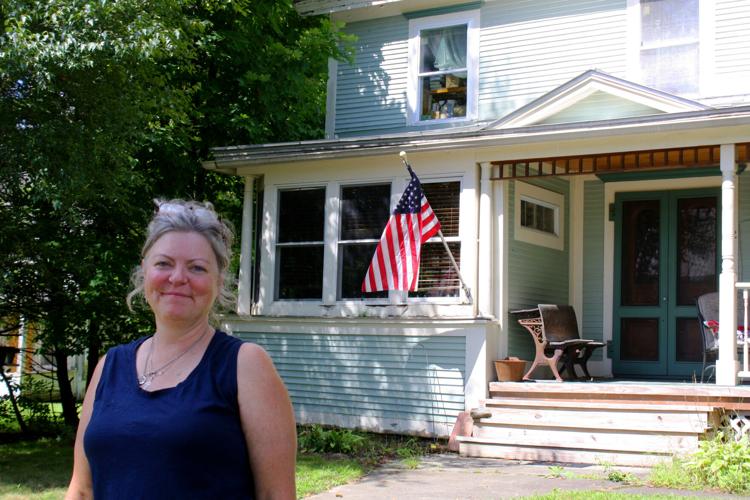 Suzanne Hull-Casavant stands in front of her house, 92 Orchard St. in Enosburg Falls. Annette Parmelee, a suffragist pivotal to getting Vermont women the right to vote, lived in the house from 1889 to 1924. 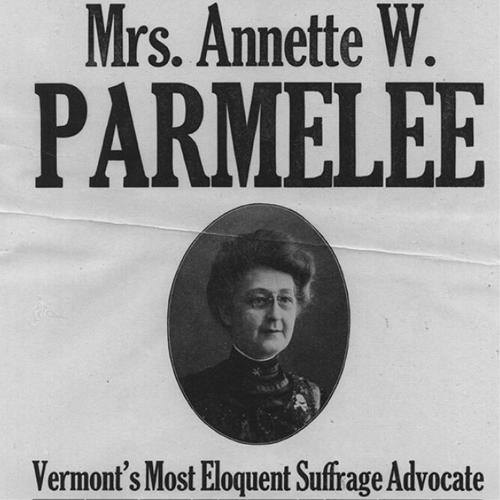 A portrait of Annette Parmelee is featured on a broadside poster printed in 1917 by the Randolph Suffrage Club. The poster promoted a talk by Parmelee called “Woman’s Place,” held in Randolph High School’s auditorium. 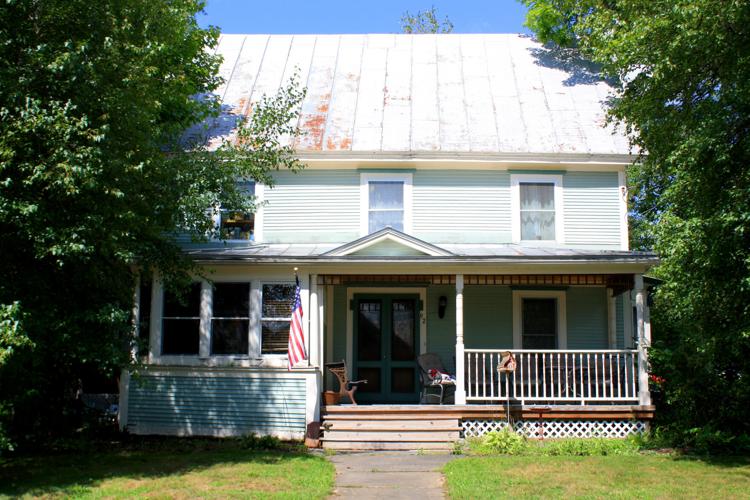 92 Orchard St. as seen in late August. The house, which was built in approximately 1890, is getting a historic marker.

ENOSBURG FALLS — Long before Enosburg’s student athletes were called the “Hornets,” a strong and outspoken woman earned that nickname.

Annette W. Parmelee, known as the “Suffragette Hornet,” lived at 92 Orchard St. in Enosburg Falls from 1889 to 1924. As the press secretary for the Vermont Equal Suffrage Association, Parmelee was pivotal in bringing the voting rights movement to the masses, historians say.

Today, Suzanne Hull-Casavant and her family live in the house, its street-facing facade looking much the same as it did at the last turn of the century.

“When I found out she lived here, I felt like I won the lottery,” Hull-Casavant told the Messenger. “I was so excited.”

The Vermont Suffrage Centennial Alliance, which coordinated a series of events in 2020 to commemorate the 100th anniversary of women’s suffrage, is in the process of placing a state historic marker on Orchard Street.

VSCA member Laura Daudelin met with Hull-Casavant in late August to see the house and determine a location.

“It’s timely,” Hull-Casavant said, standing on the front lawn. “With everything that has happened with women’s rights.”

Daudelin pulled her camera away from her face. “I’m scared,” she said. “Everybody’s got to get out there and do what they can to raise awareness.”

American women were granted the right to vote in 1920, but other freedoms, specifically the right to an abortion, have since been given and taken away.

“I can’t believe my daughter has fewer rights than I did,” Hull-Casavant said.

Who was Annette Parmelee?

Born in 1865 and raised in Washington, Vermont, Annette Watson moved to Enosburg Falls in 1889. She was 24 then and came to marry Edward J. Parmelee, an accountant for the Dr. B.J. Kendall Company, an industrial facility located at 228 North Main Street.

Cindy Weed, president of the Enosburg Historical Society, said the company manufactured and marketed “spavin cure,” a treatment for horse ailments, as well as other pain relievers for human consumption.

Kendall and his partners built many of the houses in town and funded the construction of the Enosburg Opera House. It’s rumored that the sidewalk on Orchard Street is wider than usual because Edward wanted to walk the secretaries home three-abreast at the end of the day.

“The business and its employees and shareholders really put Enosburg on the map,” Weed said.

Marilyn Blackwell, a noted Vermont historian and writer, has perhaps done the most research on Annette Parmelee. Discovering a collection of Parmelee’s letters kept by the Vermont Historical Society was key to learning who she was.

“When I started looking at those, I really got excited about what she had done for the state,” Blackwell said. “She was really ubiquitous. And she was well known by the legislators, governors and many, many newspaper editors.

Parmelee left behind her nursing career and her membership in the Congregational Church to marry Edward. But upon arriving in Enosburg, she quickly became a dedicated member of the Methodist Episcopal Church.

“She was a very religious woman,” Blackwell said. “She had this real sense of mission that she needed to do this for women. And that zeal from her religious beliefs carried over into her activism.”

She was well known for her literary pursuits, her devotion to religious music and her artistic endeavors. Blackwell said it was not long before she was in demand as a lecturer on art and music, as a vocalist and as an occasional performer.

At a meeting of the Enosburg Library Club for example, Parmelee once entertained the group with a presentation of the “Glamorous Paintings of the World and their Artists,” according to research by Enosburg historian Janice Geraw.

“All felt very grateful to Mrs. Parmelee for the delightful and interesting talk,” Geraw reported. “She also sang a solo ‘O Sacred Heart.’ She read a Longfellow poem at yet another meeting.”

A gracious host, Parmelee often welcomed folks to her home, which was decorated with her own art. It was also from the Orchard Street house that Parmelee wrote the state’s newspapers repeatedly about her two key issues: women's political rights and prohibition.

First formed without her, the group advocated for a suffrage amendment to Vermont’s constitution in 1870, but failed royally. It wasn’t until 1885 that taxpaying Vermont women were granted the right to vote in school meetings only.

But taxpaying women were few and far between, so the suffrage movement was reinvigorated at the turn of century to advocate for the enfranchisement of all women.

“That's when public understanding of the movement really began to grow because she [Parmelee] was in the news,” Blackwell said.

“She had this real sense of mission that she needed to do this for women."

Parmelee was a frequent speaker at state suffrage conventions, and she wrote many letters and columns, particularly to the Messenger and the Burlington Free Press. Blackwell said that while some newspaper editors at the time supported her, others dismissed her and called her a “radical.”

They did so by nicknaming her the “Suffragette Hornet,” because like an annoying wasp, she was constantly buzzing about the statehouse pestering for women’s voting rights.

In 1915, a Messenger opinion writer wrote: "In Iceland women are allowed to vote. Why not locate in Iceland, Mrs. Annette W. Parmelee?"

Editors and legislators also tried to dismiss her by using the British word “suffragette” instead of the United States’ “suffragist.” In England, suffragettes were known for their organized, often violent protests, and while some American suffragists turned to radical acts, that was not the mainstream tactic.

In fact, women in Vermont had mixed-emotions about suffrage.

“They didn't want to rock the boat, particularly in their own household,” Blackwell said. “There was a lot of silence, even though many women may have secretly agreed with much of what she [Parmelee] said.”

That is perhaps what makes Parmelee so remarkable: she was bold enough to voice her opinion publicly and sign her letters with her own name.

Counter to what was often the case at the time, Parmelee’s husband Edward was supportive and tremendously helpful with her activism.

“He really was incredibly supportive to her and helped her with the legal research that she did in order to present the legislature with a bill that could make men and women equal in voting rights,” Blackwell said.

After more than a decade of work, Parmelee’s greatest triumph came in 1917, when Vermont became the first state in New England to grant women the right to vote in municipal elections.

Fighting for a federal amendment

On April 22, 1920, the Messenger reported that Parmelee was one of 460 women who met with Gov. Percival Clement at the statehouse in Montpelier to demand he call a special session of the legislature to ratify the 19th Amendment. Only one more state needed to ratify the amendment in order for it to become federal law.

“From every part of the Green Mountain State they came,” the Messenger reported.  “Loyal and ardent soldiers for the great cause, overcoming every obstacle that poor train service, almost impassable roads and long distance could put in their way.”

Parmelee and several other women delivered short, concise speeches urging the governor to open a session.

While Gov. Clement said he was glad to see the women there, he did not retreat from his former position that the decision to ratify the national amendment should be left to a public vote and not the legislature.

Miss Ann Batchelder of Woodstock then reminded Clement that the state’s women would be watching every Republican governor who delayed ratification.

On Aug. 18, 1920, Tennessee became the 36th state to ratify the amendment, certifying votes for women in the United States.

“Women never forget,” Batchelder said at that April meeting, and she was right.  In the 1920 gubernatorial election, Clement’s candidate was defeated in the Republican primary by James Hartness, who had been a leading voice on a state committee to ratify the 19th Amendment.

The Vermont Historical Society estimates Hartness captured about 75% of the 10,000 or more votes cast in the election by women.

On a Wednesday afternoon earlier this summer, Hull-Casavant stood in her home office, ribbons of sunlight streaming through the windows and cascading across the hardwood floors. A cable-knit sweater was thrown over the back of her desk chair and shelves of books stretched toward the ceiling.

“I like to imagine Annette writing letters in this room,” Hull-Casavant said, her hair twisted up into a loose bun at the back of her head.

The office looks much different now than it did when Parmelee lived there, save perhaps for a uniquely curved interior wall. But as a lover of history, fashion and antiques, Hull-Casavant has enjoyed keeping the home’s decor true to its late 19th century roots.

The four-bedroom, 2.5-bath home was built around 1890, and she and her husband Chris bought it about 25 years ago. They raised their children there, but it wasn’t until two years ago that Hull-Casavant learned about the previous owners.

In August 2020, Hull-Casavant was one of about 25 people who attended an event at the now-closed 1906 Carriage Barn in Enosburg to celebrate the 100th anniversary of the ratification of the 19th Amendment.

Blackwell gave a presentation of her research on Parmelee, and that’s when Hull-Casavant realized the connection. Now, she feels a kind of kinship with the suffragist.

Like Parmelee, she is a woman about town, active on numerous local committees and boards. She has served on the school board, is the president of the Enosburg Opera House and the owner of Nutshell Storage.

But perhaps in what is the most serendipitous alignment, Hull-Casavant is running this November for state representative, a campaign that is only possible because of the efforts of Parmelee and other suffragists.

“I’ve always been outspoken, so it’s a good thing I was born in this century,” Hull-Casavant said.

Bridget Higdon is the Messenger's Managing Editor. She was previously a staff writer and before that the editor-in-chief of The Vermont Cynic, UVM's independent newspaper. She loves to explore Vermont by bike and do the snow dance.