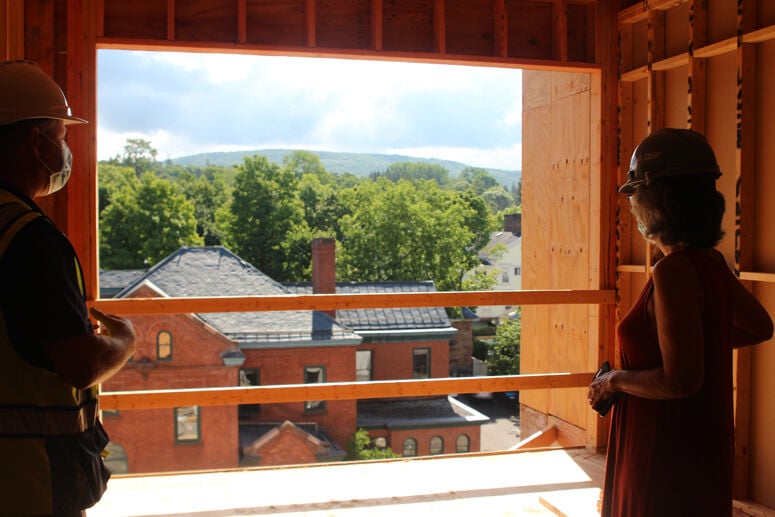 The St. Albans Free Library is part of the western view from a new apartment building on Maiden Lane. 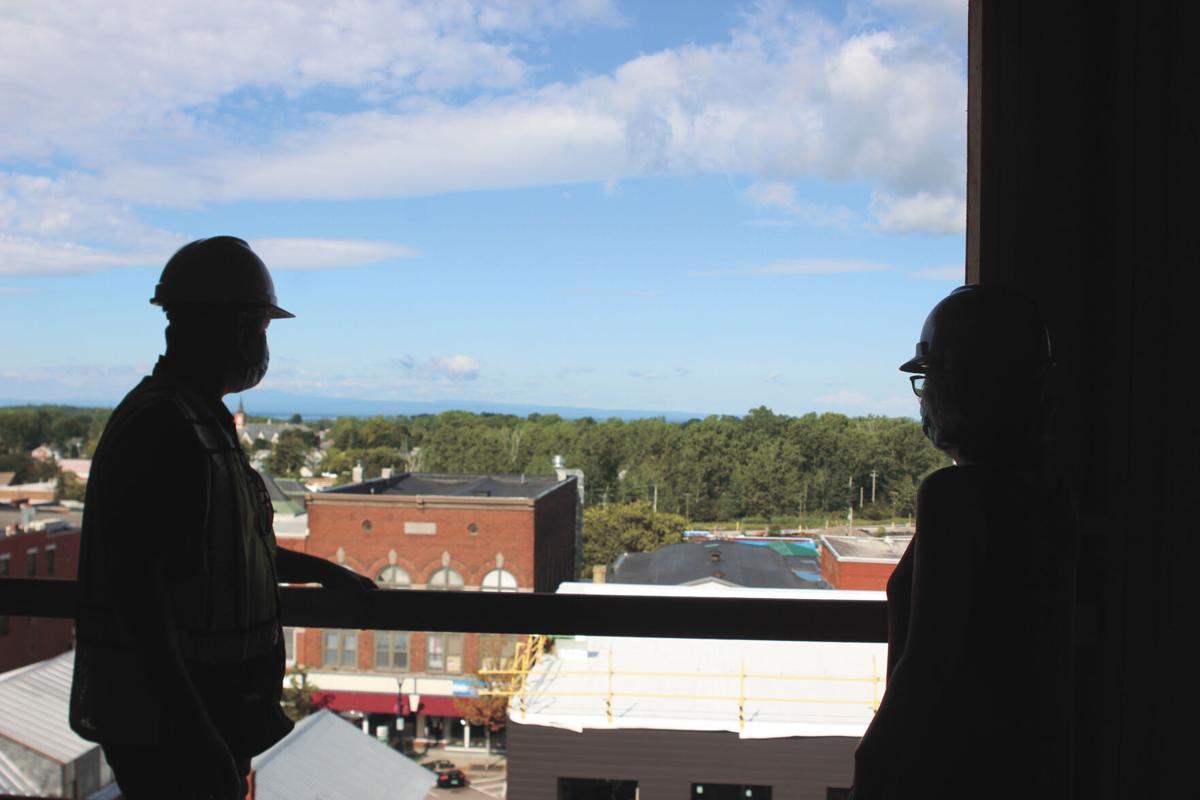 The eastward view from a new residential building on Maiden Lane. Developer Grant Butterfield is in silhouette on the left. 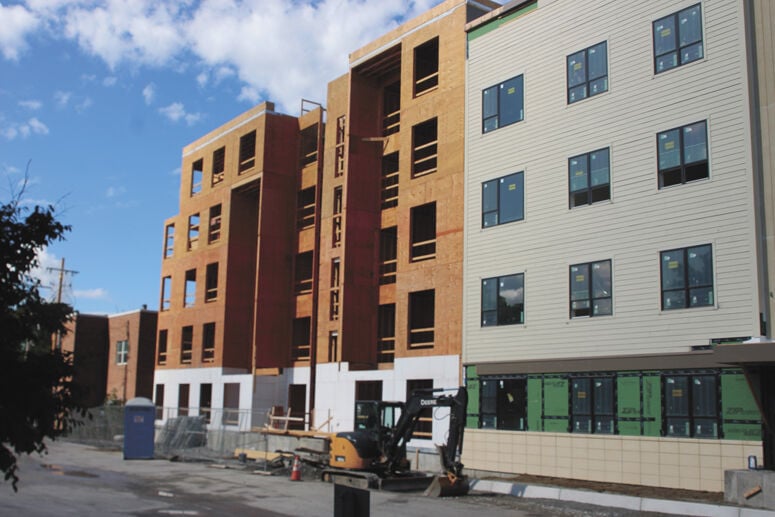 Two new residential buildings are being built on Maiden Lane. The one on the left will house market rate apartments and the one on the right will be owned by Champlain Housing Trust. 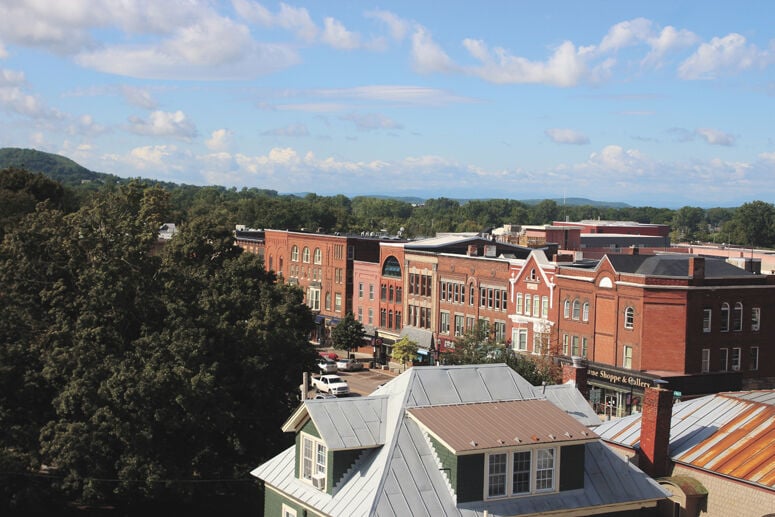 Main Street in St. Albans City as seen from a new building on Maiden Lane. 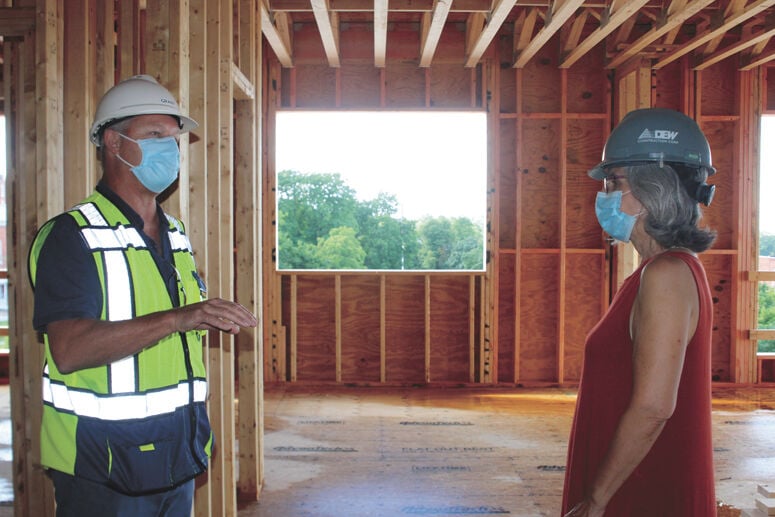 The five story residential building will house 33 market rate apartments. Next door is a comparably-sized building which will belong to Champlain Housing Trust (CHT) and offer low-income housing.

The market rate apartments are being developed by Grant Butterfield, who is also the developer for the 25,000 square foot commercial building on the corner of Congress and Main streets.

All three buildings will have underground parking with some additional spaces located on a lot between the three buildings. St. Albans City will manage the lot as part of its parking program.

“This is transformational,” said Liz Gamache, former St. Albans City mayor and the interim head of the Vermont Preservation Trust. Gamache joined the Messenger for a tour of Butterfield’s residential building on Tuesday.

“This will be so great to attract people to St. Albans,” she said.

Butterfield agreed, saying, “If people move into the city, the city thrives.”

The building is just steps away from the St. Albans Free Library and Taylor Park, as well as the churches which line the park’s west side. Main Street with its restaurants and shops is less than a block away.

Because of the building’s height, the upper floors have spectacular views, which Butterfield plans to showcase with lots of windows and balconies for many of the apartments.

There will also be a rooftop terrace open to all residents of the building. “We’ll put some amenities up there,” Butterfield said.

Twenty-two of the apartments will be one bedroom with a den. It’s a size Butterfield said is attractive to people in their 20s, who don’t want roommates, but do want some conveniences such as a dishwasher and a washer and dryer right in their apartment.

There are also a handful of one-bedroom apartments without a den.

Gamache noted that size may also be attractive to seniors no longer wanting the work of caring for a home.

Three of the apartments have two bedrooms and two and a half baths.

On the south end of the fifth floor there are two penthouse apartments, one of which has three bedrooms and 2.5 bathrooms.

An interesting feature of the construction is that steps have been taken to insure residents won’t be able to hear footsteps in the apartments above or from the stairwells. The architect also designs a lot of hotels and silencing those sounds is now standard in that business, according to Butterfield.

Unlike other projects in the region, this one remained on track despite COVID-19. Butterfield said that when the economy initially shut down because of the pandemic, his banker said, “Grant, we’re not going ahead, right?”

The key difference between the projects which shut down and this one was the involvement of the city and Champlain Housing Trust, according to Butterfield.

The city purchased the post-WW II era apartment building that had run along the western side of Maiden Lane, then demolished the building and removed contaminated soils beneath. Once the site was ready, it was sold to Butterfield and CHT.

That work reduced the risk for Butterfield and CHT.

“The city had invested a lot of time in getting the bones done,” he said.

“I like to think it’s a strong collaboration,” Gamache said of the public and private partnership behind the project.

Butterfield will then begin the next phase of the project, transforming the current CCV building on the southern edge of the city into a new headquarters for the St. Albans Police Dept.

The new market rate apartment building on Maiden Lane by the numbers.

22 one-bedroom apartments with a den