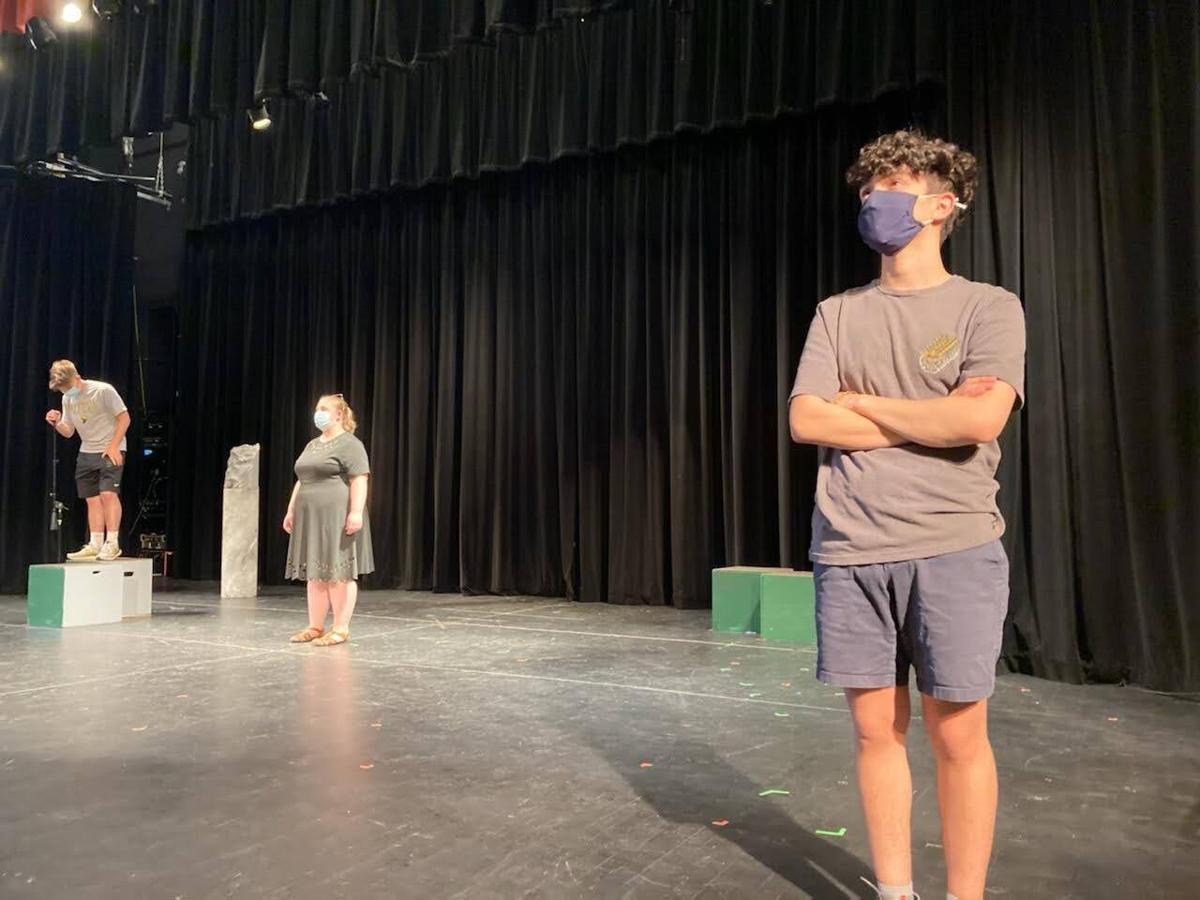 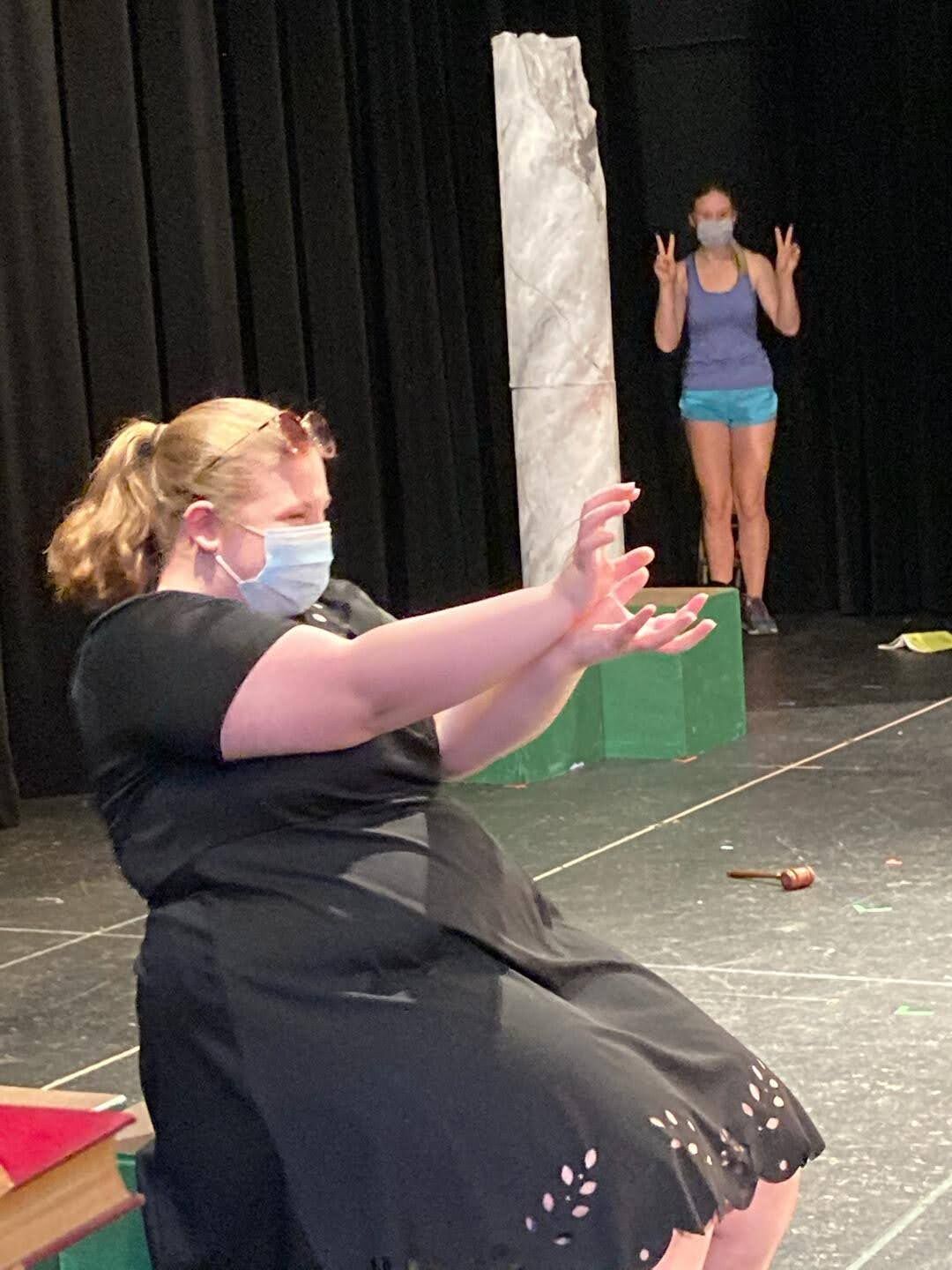 ST ALBANS CITY — Despite a global pandemic, mandatory distance between themselves and their classmates and a cloudy way forward, Bellows Free Academy students are demanding that the show must go on.

“I’m very excited to be back together,” said freshman Penelope Noza, who is considering a career in aeronautical engineering but for now is managing all things lighting, back stage, with a few acting roles on the side.

“We’ve always been very close because there are so little of us,” said junior Emily Parent. “But because of this unique situation, it’s made us closer ... this is all we’ve got!”

The annual festival, the Junior Jam, also called The Clash of the Classes: A One Act Play Competition, is a heart-pounding race to the curtain fall beginning in the spring, when each grade democratically elects their own director to be the head of their own production. The directors then choose their one-act play or pick one suggested by Drama Director Susan Palmer. Parts are cast, and crews assemble to raise the poetry and comedy up from its paper dungeon to come to life onstage.

But they still had another nemesis staring down their on-stage masterpieces: the restrictions of COVID-19. The pandemic sidelined last year’s event, but the show will make a return next week.

“This year was definitely harder, especially learning online,” said freshman Jack Curry. “But it was probably also hard for teachers, because they had to learn a whole new way of teaching ... I was happy that we got to do something at the end of the year.”

The weeks of preparation, blood, sweat and determination then normally culminates in a live performance where each of the four plays are presented to their audience and a panel of adjudicators who judge the technique, organization, memorization, presentation, projection, style and more.

And with students only able to meet for several hours during the week because of hybrid learning models and the inability for many students to acquire transportation to practice, some auditions and script readings were done virtually — however the students could.

“We’ve also done weekend rehearsals,” Parent said. “Because we go on different days, I don’t see half of my cast normally. This is my time to see them, to continue those connections I’ve had for years.”

This year, Palmer said the students are going to be filming the entire festival for their audience members in lieu of a live audience, per COVID-19 guidelines, on May 24 and May 25, but the curtain rises on that Friday, May 28. Thespians and theatre lovers will want their comfiest clothes and their critical eye for this year’s Clash of the Classes, airing for free at 7 p.m.

“The students can come in and watch us filming, and for some of them it’s easier that way,” Palmer said.

The freshmen will be presenting their rendition of “The Least Offensive Play in the Whole Darn World,” by Jonathan Rand, while BFA sophomores will be performing “Cut” by Ed Monk.

The juniors are bringing “The Greek Mythology Olympiaganza” by Don Zolidis to life, but they’re keeping a watchful eye on the seniors, who may just steal the stage with their version of Ed Monk’s “A Company of Players.”

And the show doesn’t stop once the curtain falls: Palmer said that lifelong thespian Madi Gagner has been so inspired by her connection to acting (and musical theatre in particular) that she’s making it a possible life goal to pursue acting as a professional.

In the meantime, Parent said she’ll be going after a degree in business administration, but the world of the stage will never leave her heart. Ideally, Parent said she identifies closest with directing, and hopes to find a theatre troupe to direct when not pursuing her career.

Awards for the winners of the festival will be announced at the Theatre Awards Night, which Palmer said will be live-streamed on June 3 at 7 p.m.

“Our administration was really supportive in finding new ways to help our students access the enrichments that are important to them,” Palmer said.

Palmer said she is absolutely planning for the musical next year, but the title of the long-awaited hopefully in-person production still remains under lock and key.