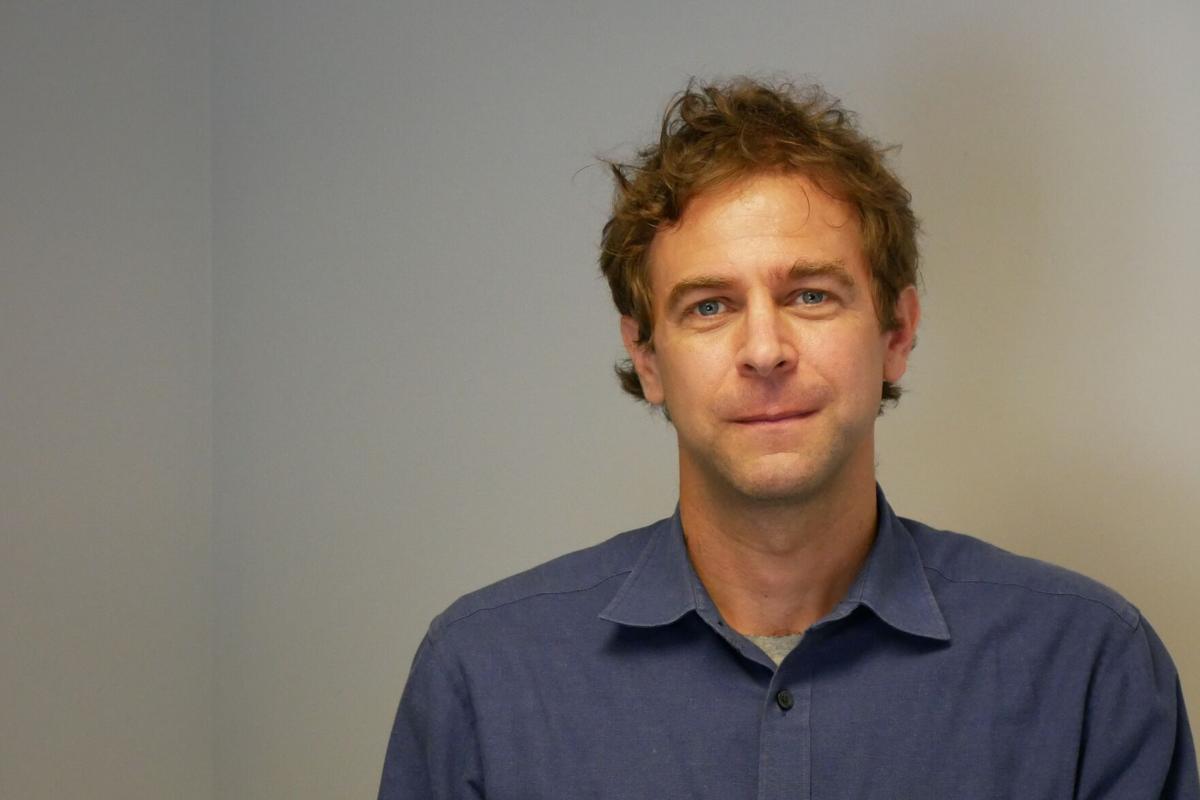 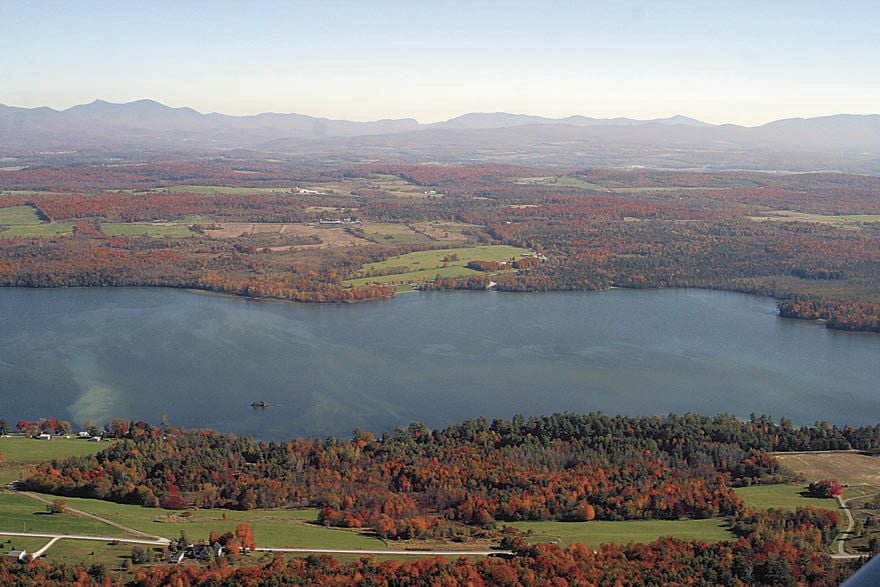 Lake Carmi is seen from above in this Messenger file photo.

ST. ALBANS – In his four years as the head of Vermont’s senate, Sen. Tim Ashe, D/P – Chittenden, has a record one could consider hanging a hat on.

His tenure at the helm of the Vermont Senate saw the passage of a higher minimum wage, a slew of new gun control bills, funding for clean water initiatives and the state’s first housing bond.

As the 2020 primaries approach, Ashe is now one of four Democrats vying for the party’s candidacy for lieutenant governor, a seat Ashe recently told the Messenger he hoped would allow him to be the “policy champion” his place at the senate’s head had led him to moderate.

“I’ve been really blessed to lead the senate for the last four years,” Ashe said as he sat down for an interview in the Messenger office, “but, increasingly, I’ve felt that I’ve had to subordinate myself more and more because I play the manager role.”

“Every time I get up to say something publicly and chart the course, it’s always on behalf of the whole group,” he said. “I’m really ready to sort of return to the priorities and passions I came into public office with, and the lieutenant governor’s office is really a great platform to become a policy champion.”

During his conversation with the Messenger, Ashe returned to those days as a councilor in the Queen City as a source of inspiration for his current bid for lieutenant governor, recalling concerns around high school graduates who, in Ashe’s terms, “fall off” after graduation.

“They don’t go on to any kind of education or training, they don’t wind up in the workforce, and their potential is just dashed,” Ashe said. “Vermont can’t afford to lose thousands of young people every year to that kind of drifting away or falling through the cracks.”

“Sometimes you can pull off a miracle in the legislature,” he said, “but more often, you are subject to 180 different points of view, which results in more piecemeal thinking.”

The lieutenant governor’s office, Ashe said, offered room for more substantial ideas that people could rally around, like, per Ashe’s example of youth programming and development, promoting and expanding efforts like the Vermont Youth Conservation Corps.

“We have to make a big bet on young people and skill development, especially for kids whose families aren’t going to lift them to jobs or internships,” he said. “The lieutenant governor, identifying that as a key initiative, can convene people at a much higher level and set a course for real, substantive change.”

Ashe expanded his example to other prominent issues beleaguering the Green Mountain State, from the state’s unmet climate change goals to community development, where someone might be better suited to take action from the “10,000-foot view” of the lieutenant governor’s seat.

Outside of its constitutional charges, the lieutenant governor’s office operates largely according to the role envisioned by its incumbent.

In the case of Vermont’s current lieutenant governor, Lt. Gov. David Zuckerman, the office has functioned as an ombudsman of sorts, offering different initiatives and events for connecting more politically agnostic Vermonters to the issues facing the state – and wider U.S. – today.

For Ashe, who can cite both a background in community development and years of experience in Vermont’s legislature, the office offers a place for the Chittenden County progressive to campaign around macro-level issues like poverty, cited by Ashe as a personal priority.

“One of my very serious concerns are the number of young kids coming up very poor,” Ashe said. “That creates sort of foundation-level problems in almost every problem in Vermont. We have many programs that alleviate the effects of poverty, but not a coordinated strategy to lift people out of poverty.”

He also spoke of having “earned” the “10,000-foot view” he could bring to the lieutenant governor’s office, having intentionally localized both senate committee forums and his own service as the senate’s president pro tempore in communities outside of Montpelier since assuming the senate’s helm.

One such forum brought the senate’s economic development committee to St. Albans not once but twice last year, both to tour the city’s redeveloped downtown and to hear from developers and local experts about Northwest Vermont’s well-known housing crunch.

Ashe said he was also no stranger to such touring, citing his own visit in St. Albans to the Northwest Counseling & Support Services’ offices for a conversation around mental health – including the agency’s counseling position within the local state police barracks Ashe recently sought to bring statewide.

There were also meetings Ashe said he had with the Northwest Technical Center in St. Albans and committee meetings in Franklin, with the latter ultimately helping lead to 2018 legislation declaring the algae-stricken Lake Carmi a “lake in crisis” and mandating a response from state environmental officials.

“I did the same thing myself,” Ashe said. “I traveled around the state probably seven or eight times, usually on a particular theme.”

Ashe also seemed to have a response for concerns that a Chittenden County legislator could represent Vermont’s largely rural whole, noting that the issues plaguing residents in Vermont’s metropolitan middle were ultimately the same concerns families faced in small towns – albeit with different details.

As one example, Ashe pointed toward the opioid epidemic, which became a watershed issue in a Green Mountain State hit hard by national trends in drug-addiction and drug-related crime that surged in the first half of the 2010s.

For Franklin County, the answer was work with local health care providers – Ashe listed then-Northwestern Medical Center chief Jill Berry Bowen by name – to help forward the network of medically-assisted treatment providers now strung through much of the county.

Amid the next phase of COVID-19 and local and state budgets riddled with holes from the fallout of the pandemic’s first phase, however, means a possible Ashe lieutenant governorship could come as Vermont continues to struggle with an almost unprecedented crisis.

Ashe doesn’t appear to be kidding himself about that fact either, having criticized plans by his primary competitors to stand-up new state programs amid an expected recession and, at the time of his interview with the Messenger, what looked like an expected $330 million hole in the state budget.

“I have the blessing and curse of knowing how government works and the current financial picture,” Ashe said. “When you have a $330 million revenue hole, your first goal is to hold onto what you already have before looking at shiny new objects.”

The outgoing president pro tempore had mostly high marks for Gov. Phil Scott’s handling of the pandemic, citing only one point of contention – the governor’s initial hesitance to issue a statewide public mask mandate – that the governor’s since resolved with a mask order declared last Friday.

Ashe pledged to support whoever is elected governor in continuing to manage a public health crisis most expect to last through winter, and said he’d prefer to defer questions about statewide vaccination mandates – outside of school mandates – and other public health issues to the state’s health officials.

“We’ve been very good about deferring to the Commissioner of Health,” Ashe said. “It’s one of the reasons we did not take a vote on mandating mask wearing, because it’s dangerous when the legislature starts playing health official and picking and choosing from the recommendations of the department.”

With the climate crisis likewise looming – the Intergovernmental Panel on Climate Change recently warned the world had until 2030 to avoid the worst impacts of the well-documented warming of Earth’s climate – Ashe stressed there were still actions the state could take despite the state’s murky budgets.

Among those were weatherization programs the lieutenant government could champion and the Transportation and Climate Initiative (TCI), a tentative interstate agreement taxing gas providers for funds to build out alternative modes of transportation.

While critics have lambasted the TCI as a “gas tax” under the assumptions taxes on gas providers would ultimately be passed down to customers as the pump, Ashe said almost guaranteed participation from other, larger states meant Vermont would still likely see TCI’s impact regardless of its participation.

Participation, Ashe said, meant Vermont could benefit from the program and direct funds toward transit options that might offset the personal impacts of higher costs at the pump. “At a minimum, if we’re going to be impacted by other states anyways, not participating makes no sense at all,” Ashe said.

As Vermont also now reckons with questions of policing and racism amid widespread protests spurred by the police killings of Black men and women nationwide, Ashe said the lieutenant governor’s position may also have a role in those conversations as well, committing the office to a relevant “watchdog” role.

Ashe said, as a legislator, it was common to see policing and sentencing reforms, from funding for body cameras for the Vermont State Police to requirements that offices track race-based data, passed into law before being misused or ignored by agencies subject to those reforms with little accountability.

“Almost every time, the people who are in positions to implement these policies find a way to either slow it down, water it down or just ignore it,” he said. “When you’re lieutenant governor, you can have a sort of hawk’s eye on it.”

Most importantly for the outgoing senate leader, however, was the fact he could leverage a lawmaker’s experience that his competitors – save for fellow legislator Sen. Debbie Ingram, D – Chittenden County – could not.

“A lieutenant governor with experience on both the governing and legislative side is absolutely critical at this moment,” Ashe said, “because this is not a starter job.”