You are the owner of this article.
Edit Article Add New Article
Subscribe | Sign In
Home
News
Sports
Classifieds
Obituaries
Editorial
Business Directory
Things to Do
About Us
e-Edition
NEWSLETTERS 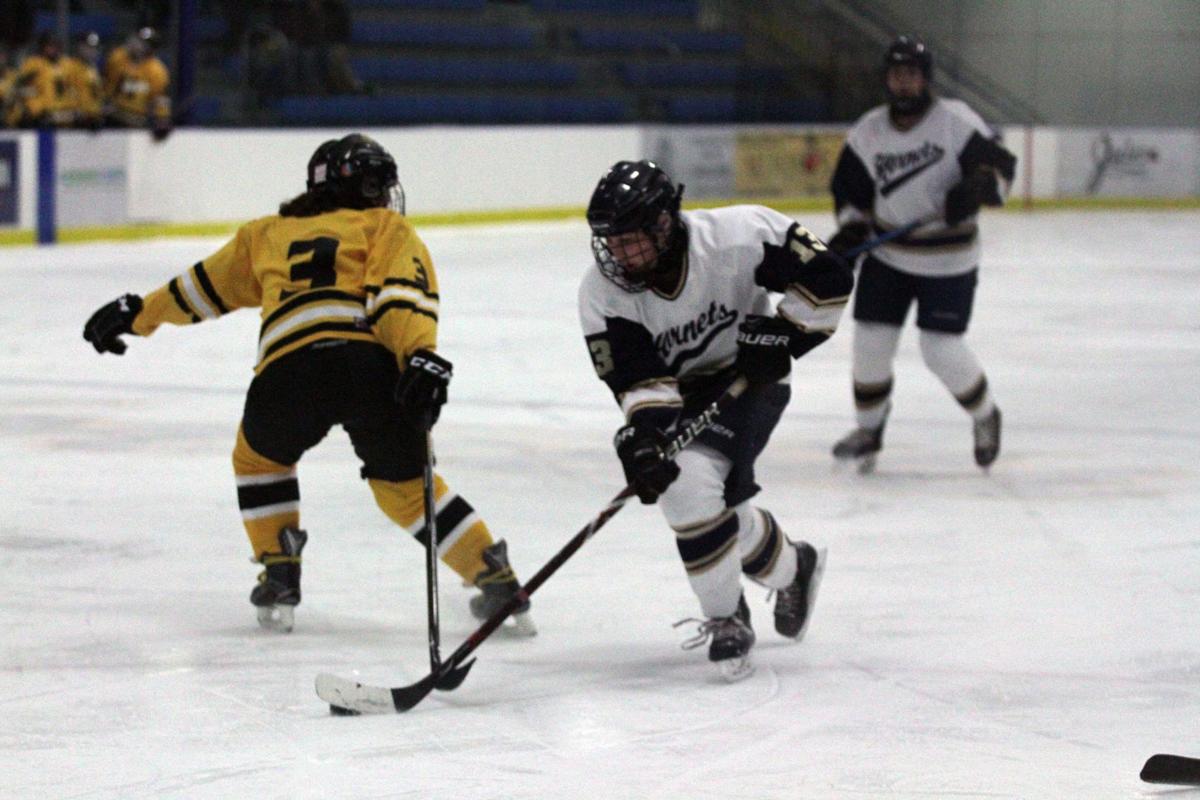 Abigail Robbins (13) maneuvers around a defender during Saturday’s scrimmage 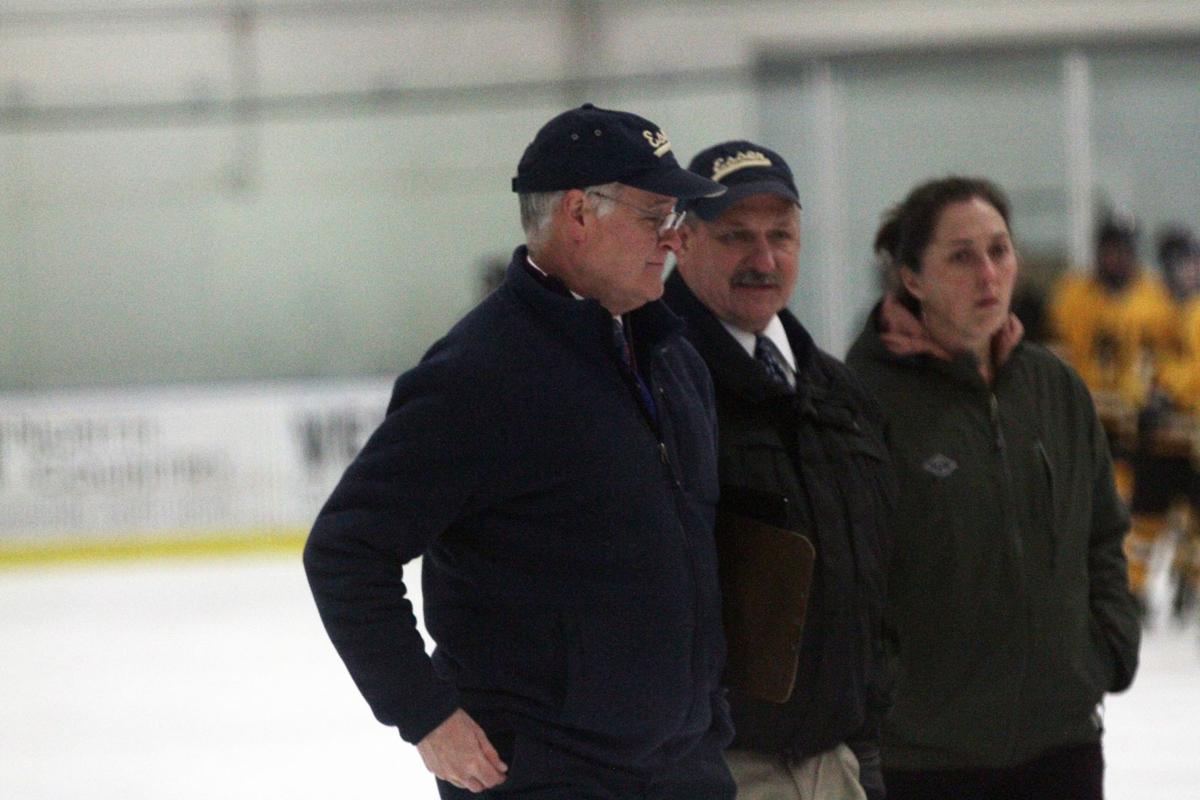 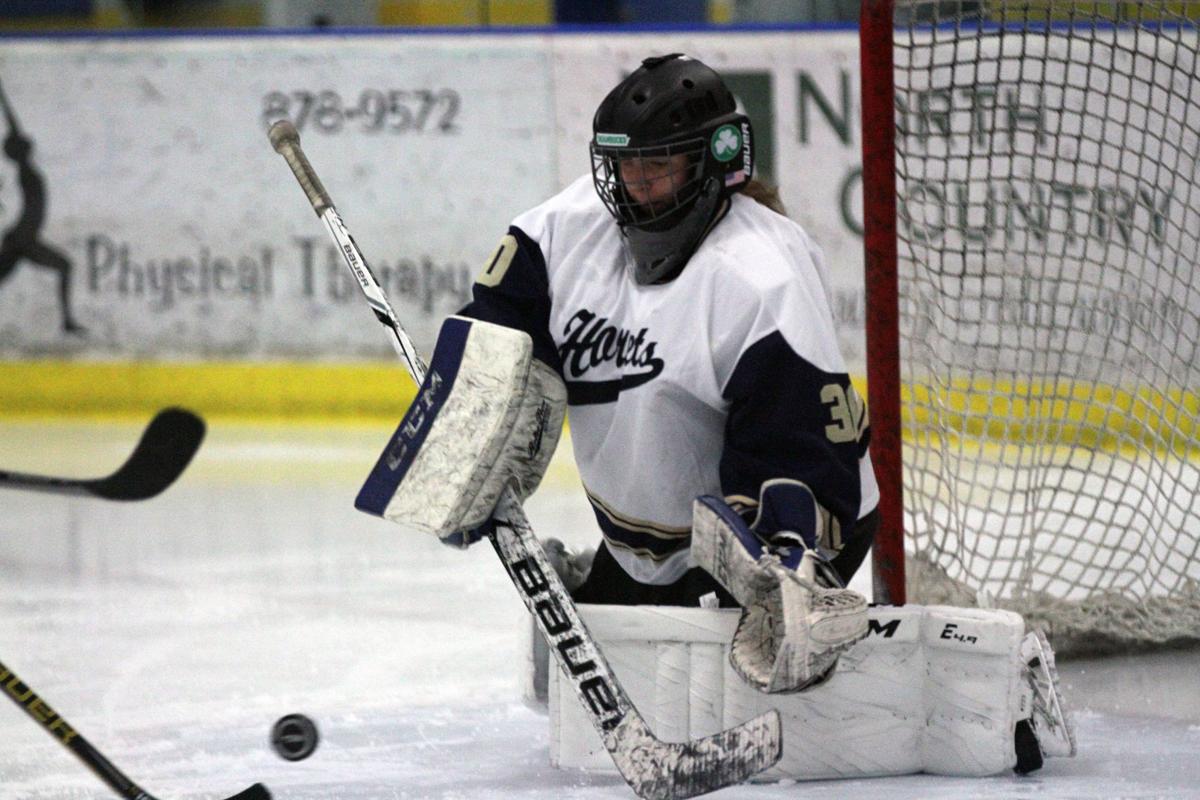 Abigail Robbins (13) maneuvers around a defender during Saturday’s scrimmage

The reigning Division I Vermont state champion girls’ ice hockey team has been hard at work in preparation for a run at defending its title.

The Essex High School (EHS) Hornets are in the midst of their preseason training--playing the second of their three scrimmages on Saturday (Nov. 30). The team will once again be led by head coach John Maddalena, the only head coach in the program’s varsity history, who is entering his 15th season at the helm of the squad.

“I’m really optimistic,” Maddelana said about the 2019-20 campaign following his Saturday matchup against Harwood/Northfield. “I think we have lots of potential. We’re young; we have six or seven freshmen. We lost quite a bit to graduation: two 100-point scorers, Burlington Free Press’ Miss Hockey with Olivia Miller-Johnson, [Madeline] Young, Molly Bruyns... on defense there was [Francesca] Martin. So there’s some big holes to fill, but I think that I’ve seen some good things in practice and some good things in scrimmage. I know we’ll be competitive and continue to work hard, and they should be as optimistic as I am.”

While each game during the regular season can ultimately be a factor in playoff implications, Maddalena was honest in saying he and his players certainly want to, and are thinking about, lacing up at the University of Vermont’s Gutterson Fieldhouse in the state title once again.

“Every year, we say we want to win the last game. We also say that that we don’t need to win them all, but we want to win the last game. And that’s really what we focus on from week to week as we have a number of objectives for each game. We track those objectives to see how we are doing; we will break down scrimmages and games and video... I really want the girls to become students of the game as well as develop their skills. So we work hard, and if the opportunity arises and we can get back to the Gut, we want to be prepared. So it isn’t as though the season will be a failure if we don’t win, but certainly one of our goals is to win.”

This year’s Hornets team is comprised of 19 players with Maddalena receiving additional help from a few assistant coaches and student volunteers. He noted how valuable the latter’s contributions are to the team despite not being on the ice.

“We’re fortunate this year to have three managers--which makes it so much easier in that we can look at statistics and help form our practices.”

Only three of those rosters spots are taken by seniors, but there will be a good number of juniors suiting up for EHS this year. Included in the position players are juniors Courtney Himes and Abigail Robbins who both had noticeable performances Saturday night--displaying solid stickhandling and skating skills against Harwood/Northfield.

When asked whether he thought Himes and Robbins would be a couple of his team’s seasoned leaders, Maddalena said, “Yeah, absolutely. Courtney’s been playing quite a bit her first two years. She’ll tell you she needs to step up this year, along with Kaylee [Moody] who’s a senior on defense. And that line with Abby [Robbins], Grace Wiggett, and Hannah Himes--they need to put some pucks in the net. When you lose two 100-point scorers, you’re looking for somebody to fill in, and I think those three can do it. They have to figure each other out a little bit, but they have great potential.”

Also among the juniors is starting goaltender Sophia Forcier who held Bellows Free Academy (BFA)-St. Albans scoreless in the 2019 championship bout. Coach Maddalena thinks her performance this preseason, along with that of classmate backup Megan Ginnett, has been good, but he acknowledges that they can still grow and get even better.

“They’ve played well. There’s certainly plenty of room for improvement. Sophie’s got two years under her belt. Megan’s improved immensely over the last two years. So I expect both of them to see some playing time. But Sophie is a great athlete, and she’s becoming one of the best goalies in the state. Last year, she shut out BFA in the finals to cap off a good year, and I expect her to get off to a good start this year.”

Saturday also marked an important date for the squad in terms of leadership. Maddalena opened the locker room floor to players who were interested in being captains--allowing them to read to their teammates a written essay as to why they wanted to brandish the ‘C’ on their jersey. All three senior Hornets and four juniors made their pitch prior to the scrimmage.

“I think that’s a testament to the team,” said Maddalena, “because when you decide to write that essay, you’re making yourself a little bit vulnerable… expressing your feelings and desires to the team. The fact that they’re comfortable doing that, in that setting, tells me that the chemistry is looking good right now.”

The Hornets start the regular season with the Christie Corrigan Blitz Tournament held at Collins Perley Sports & Fitness Center in St. Albans--taking on Potsdam High School on Friday, Dec. 13 before facing Hingham High School that Saturday. EHS will line up with BFA-St. Albans twice before the playoffs as the Hornets host the Comets on Jan. 25 before heading to Collins Perley on Feb. 19. However, Maddalena thinks that there are other teams in the state who will be tough competition and a hard matchup for his crew.

“It’s going to be very competitive. Burlington/Colchester is a really good team; BFA graduated a lot, but they still have two excellent goaltenders and some other good players. So I think that it’s going to be a battle. It’s not going to be one or two teams. It’s going to be three or four teams that’ll try and win.”

Coach Maddalena, who has won seven Vermont state titles as the head of the girls’ team--including four of the last six--offered up a little more insight to his style of coaching and his tremendous amount of success.

Essex Reporter: Does winning state championships get any easier?

Coach Maddalena: I think it gets harder because the other programs are getting stronger, so there isn’t as much difference between the teams. It’s just a lot more pressure. In the early years, everybody wanted Essex to beat BFA; that’s not the case anymore.

ER: Is it getting any less exciting, or even “boring,” winning state titles?

CM: No, because the exciting thing is: here you’ve got a bunch of girls that all have skills. How are you going to be able to put them together so that they can be a championship team? So I love the problem-solving aspect of it, and I love to help them develop their potential and really learn the game. So certainly, for me, it’s as exciting now as when it was first started.

ER: You mentioned earlier that you know you might not win every game. Is there something specific that you’d like your team to take away from your losses, or is it dependent on the game itself and how you lost?

ER: Do you adjust your style of play from year to year depending on your personnel, or do you keep it consistent and have your players adapt to what you want to do?

CM: I do. For example: we may do different things on the forecheck. If we don’t have a lot of speed on the wings--which is what I prefer--then we may not go with a two-person forecheck. Same thing with a power play… depending upon what we have, we’ve got a few different options. For defensive coverage, it usually stays pretty much the same

ER: Is there any specific amount of games during the regular season, or a specific date on the calendar, that you usually say, “We’re not doing things very well, so we need to change it up?”

CM: We’re trying to figure things out right up through, I’d say, the end of January. I’ve changed up the lines of people from offense to defense, defense to offense. Like I said, we don’t need to win every game, but we have to figure out what’s the right chemistry. So some years it comes sooner, or other years it can go to the middle of February until we say, “This is clicking, and this is what we’re going to roll with.” Some people: they need to be flexible, and that’s hard. If you’ve been playing [defense], maybe you haven’t been paying attention to what the center should be doing on the faceoff. So it can be intimidating, but they’re pretty resilient.

ER: How do you think the youth programs in the town, and community overall, help your success?

CM: It’s tremendous. If you don’t have people actually recruiting girls, then you don’t have girls to play at the high school level. So now we’re successful because, at the youth level, they put so much time and effort into their programs

ER: How does it feel to have so many of your graduates go on to play collegiately?

CM: I think it’s great. I think it says a lot about Vermont hockey that, these days, programs like the Shamrocks have certainly helped out, because they work with public high schools in terms of offering preseason and postseason for these girls--which allows them to stay with their high school teams. Plus, as you can see here, a lot of the girls on the Harwood/Northfield team are good friends with girls on the Essex team. I think it’s terrific.

ER: Do you have any hand in helping the girls get recruited to college teams?

CM: I can. But a lot of that is up to them. I write letters, but I’m not really that actively involved; I’m not contacting different coaches and saying, “Maybe you should come take a look at so-and-so.” I think quite a bit of that happens through the Shamrocks, and they play in these different types of tournaments and get that sort of exposure. For me, I’d like them to have opportunities to do that, but it’s really about just playing the game at a public high school and being part of this chemistry... enjoying it for what it is.