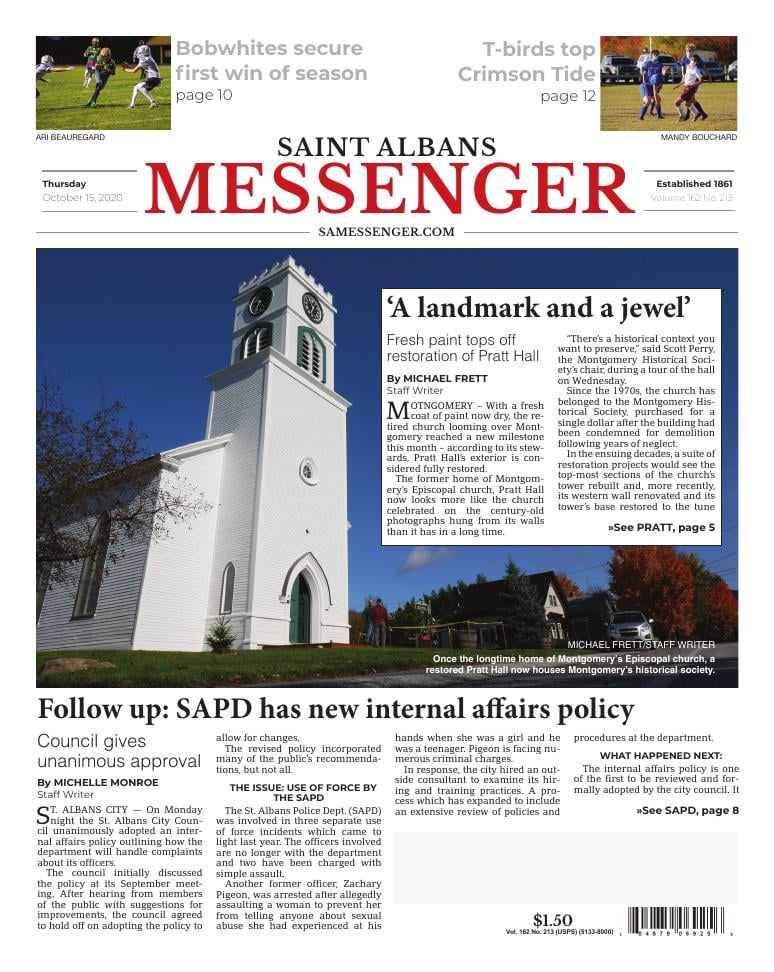 The council initially discussed the policy at its September meeting. After hearing from members of the public with suggestions for improvements, the council agreed to hold off on adopting the policy to allow for changes.

The revised policy incorporated many of the public’s recommendations, but not all.

The issue: Use of force by the SAPD

The St. Albans Police Dept. (SAPD) was involved in three separate use of force incidents which came to light last year. The officers involved are no longer with the department and two have been charged with simple assault.

Another former officer, Zachary Pigeon, was arrested after allegedly assaulting a woman to prevent her from telling anyone about sexual abuse she had experienced at his hands when she was a girl and he was a teenager. Pigeon is facing numerous criminal charges.

In response, the city hired an outside consultant to examine its hiring and training practices. A process which has expanded to include an extensive review of policies and procedures at the department.

The internal affairs policy is one of the first to be reviewed and formally adopted by the city council. It lays out:

Improvements suggested by the public in September which were incorporated into the policy include:

The city did not incorporate a recommendation to create an appeal process, an option which generated the most discussion on Monday night.

Serious complaints, those involving excessive use of force, conduct unbecoming an officer, illegal or criminal conduct, driving while intoxicated, brutality, corruption, or breach of civil rights will be investigated by an independent third party retained at the city’s expense.

Having the conclusions of the independent investigator appealed to the council or manager undercuts the point of having an outside investigator, St. Albans City Manager Dominic Cloud argued. “None of us have the qualifications to second guess that opinion,” he said.

Under the city’s charter, personnel decisions rest ultimately with the city manager. Under the policy, a serious issue, such as use of force, will be investigated by a third party which will then issue a report. If the investigation determines the complaint is sustained, meaning the evidence shows the officer acted in the manner alleged, then the chief and the manager will have to decide what disciplinary action to take.

If a complainant is unhappy with the outcome of the investigation or the subsequent action taken by the city, they have the option of filing a lawsuit, Cloud said. Under Vermont law, should the complainant prevail, they will receive attorney’s fees.

Ward 1 Councilor Tim Hawkins questioned that approach, saying administrative procedures generally have an appeal option, which could save the city legal fees.

Cloud responded that issues involving police are fundamentally different from someone appealing a permit decision by the zoning administrator to the Development Review Board. Those involve interpretation of the city’s by-laws. “It’s the uniqueness of this kind of claim,” he said. “This is the exercise of force by a governmental power.”

“I don’t want to be in a position as a civilian member of the council trying to adjudicate those kind of situations,” said Ward 4 Councilor Mike McCarthy.

Councilor Chad Spooner, Ward 5, asked what would happen if the city’s outside investigators exonerated an officer, but the attorney general decided to bring charges.

At that point, the city’s disciplinary policy would kick in, regardless of the outcome of the investigation. “They can’t be a police officer if you’re being charged by the attorney general,” Cloud said.

Hawkins also expressed concern about the council learning about complaints in a timely manner.

Cloud pointed out that it is his job to keep the council informed. “If the city manager doesn’t tell the city council that there’s an excessive force complaint, then you ought to be looking for a new city manager. That’s my job to keep you in the loop,” he said.

MOTNGOMERY – With a fresh coat of paint now dry, the retired church looming over Montgomery reached a new milestone this month – according to its stewards, Pratt Hall’s exterior is considered fully restored.

The former home of Montgomery’s Episcopal church, Pratt Hall now looks more like the church celebrated on the century-old photographs hung from its walls than it has in a long time.

“There’s a historical context you want to preserve,” said Scott Perry, the Montgomery Historical Society’s chair, during a tour of the hall on Wednesday.

Since the 1970s, the church has belonged to the Montgomery Historical Society, purchased for a single dollar after the building had been condemned for demolition following years of neglect.

In the ensuing decades, a suite of restoration projects would see the top-most sections of the church’s tower rebuilt and, more recently, its western wall renovated and its tower’s base restored to the tune of, in total, “more than a quarter of a million dollars,” by Perry’s estimates. 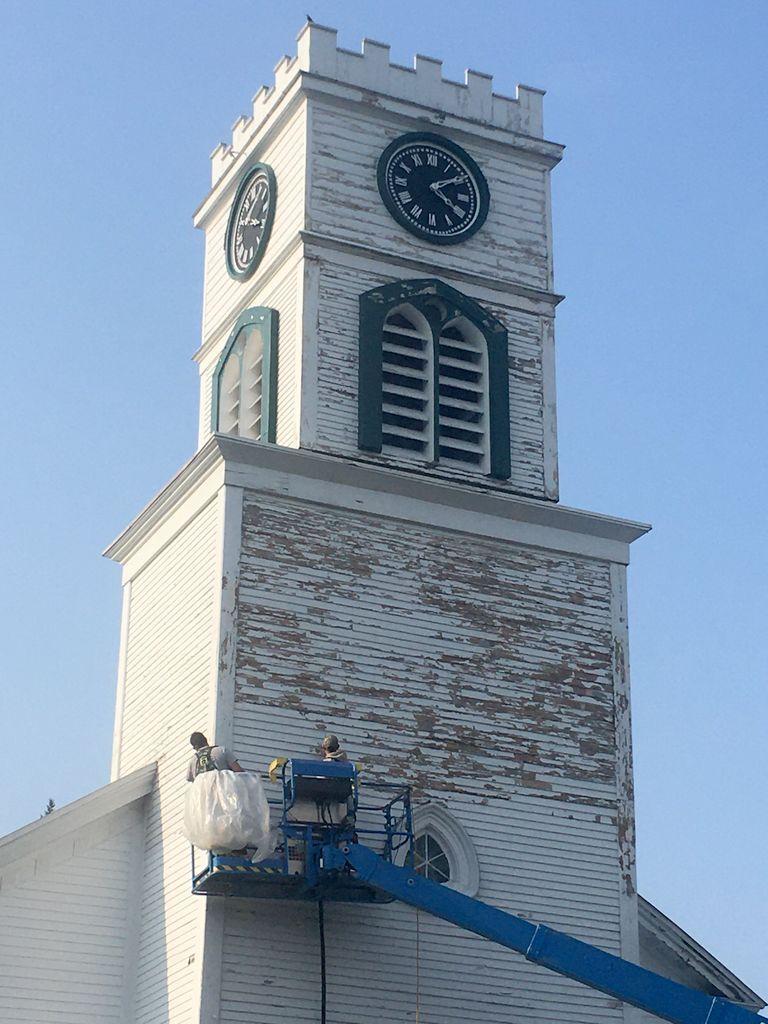 Painters repaint the tower to Montgomery’s Pratt Hall, a former church now serving as the home of Montgomery’s historical society.

Those decades-worth of restoration work were topped off this year as a layer of paint was scraped off by hand and repainted twice over.

While Perry warned “there’s always something” needing work at the former church, the Montgomery Historical Society said the new coat of paint, courtesy of a 1772 Foundation partnership with the Preservation Trust of Vermont, equated to the “completion of the exterior restoration and painting of Pratt Hall.”

“I like to use the term ‘living artifact,’” Perry said. “We don’t have a lot of artifacts,” he said, before motioning toward Pratt Hall, “but we do have one big one.” 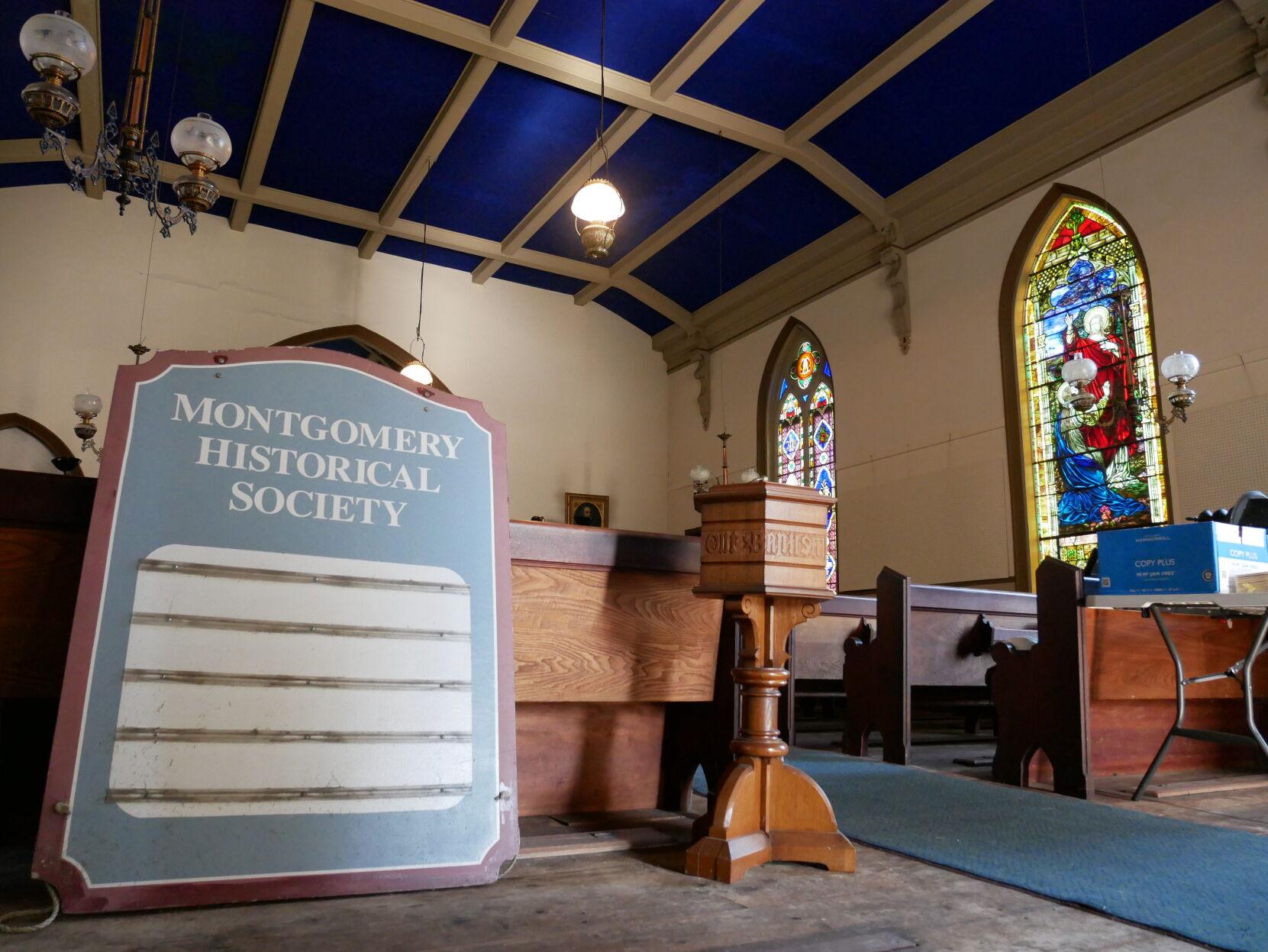 While some modifications have been made inside for a myriad of uses – several pews had been removed to make room for the historical society and mounting boards have been added so art can be displayed inside – Pratt Hall handily resembles the Episcopalian church described in Montgomery’s town history.

Though its chimes have been temporarily muted, Pratt Hall’s clocktower still counts with the hours, and the church’s classic Gothic Revival features – its pointed frames, clocktower’s parapet and detailed motifs inside – remain reminiscent of their photographed counterparts from the early 1900s.

It is only behind the scenes – in the church’s rafters and within the clocktower itself – where one can see the fresh timber, added only in the past decade, now helping hold Pratt Hall together.

In a way, according to Perry, the former church provides a vehicle for telling the larger story around the small, rural community that came to be known as Montgomery.

A church has stood where Pratt Hall now sits since 1835, when Episcopalians finished building Montgomery’s first church at the village property, according to Montgomery’s historical society.

In the wake of the American Civil War, at a time when Montgomery was, in Perry’s words, “booming,” the Episcopalian church expanded to its current footprint and added the ornate stained-glass windows now tracing its exterior with Biblical scenes and dedications to Montgomery’s first permanent settlers.

One of those founders, Joel Clapp, the son of Montgomery’s first settler and the first child born in Montgomery, would serve as the town’s first Episcopal minister. Clapp’s portrait hangs from the hall’s northern wall and his family name can be found in virtually every nook and cranny in the former church. 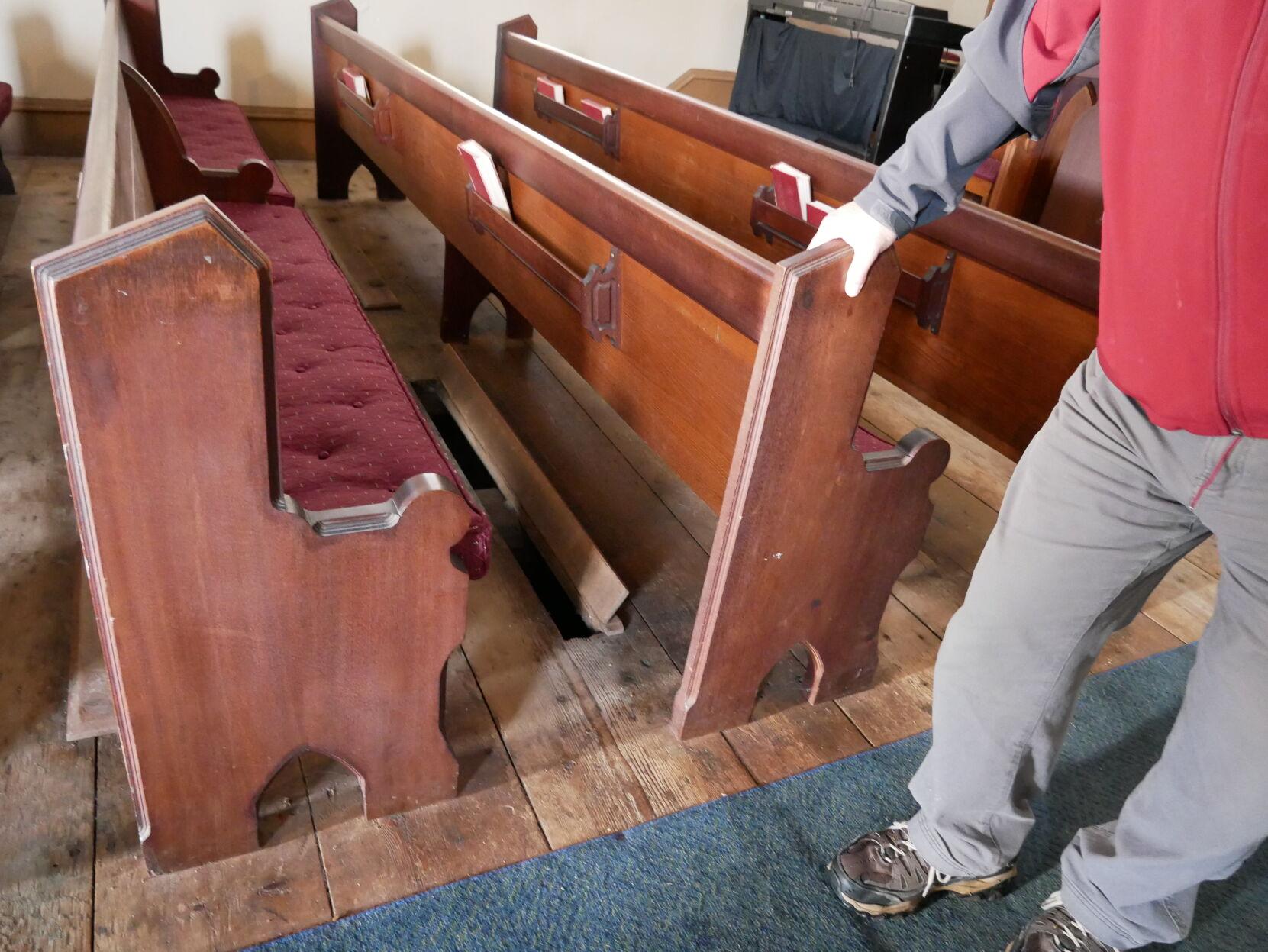 A novel heating system in the former Episcopal church now known as Pratt Hall warmed churchgoers beneath from beneath their pews as they attended church during cold Vermont winters.

A novel heating system, one believed by the historical society to be unique to the Montgomery church, allowed for heated coals to be placed in the basement beneath a vent located under each pew. During the winter’s colder months, those vents could be propped open, warming churchgoers in their pews.

As Montgomery’s boom slowed toward the end of the century, however, the church gradually lost membership. Around this time, the church would be rechristened as “St. Bartholomew’s” with the hope of drawing new membership, ultimately to no avail.

Numbers continued to dwindle at Montgomery’s Episcopalian church and, by the 1920s, services had thinned to the point of only one service being held a year.

By the time the historical society stepped in to purchase the former church, St. Bartholomew’s had deteriorated to disrepair and was slated for demolition. 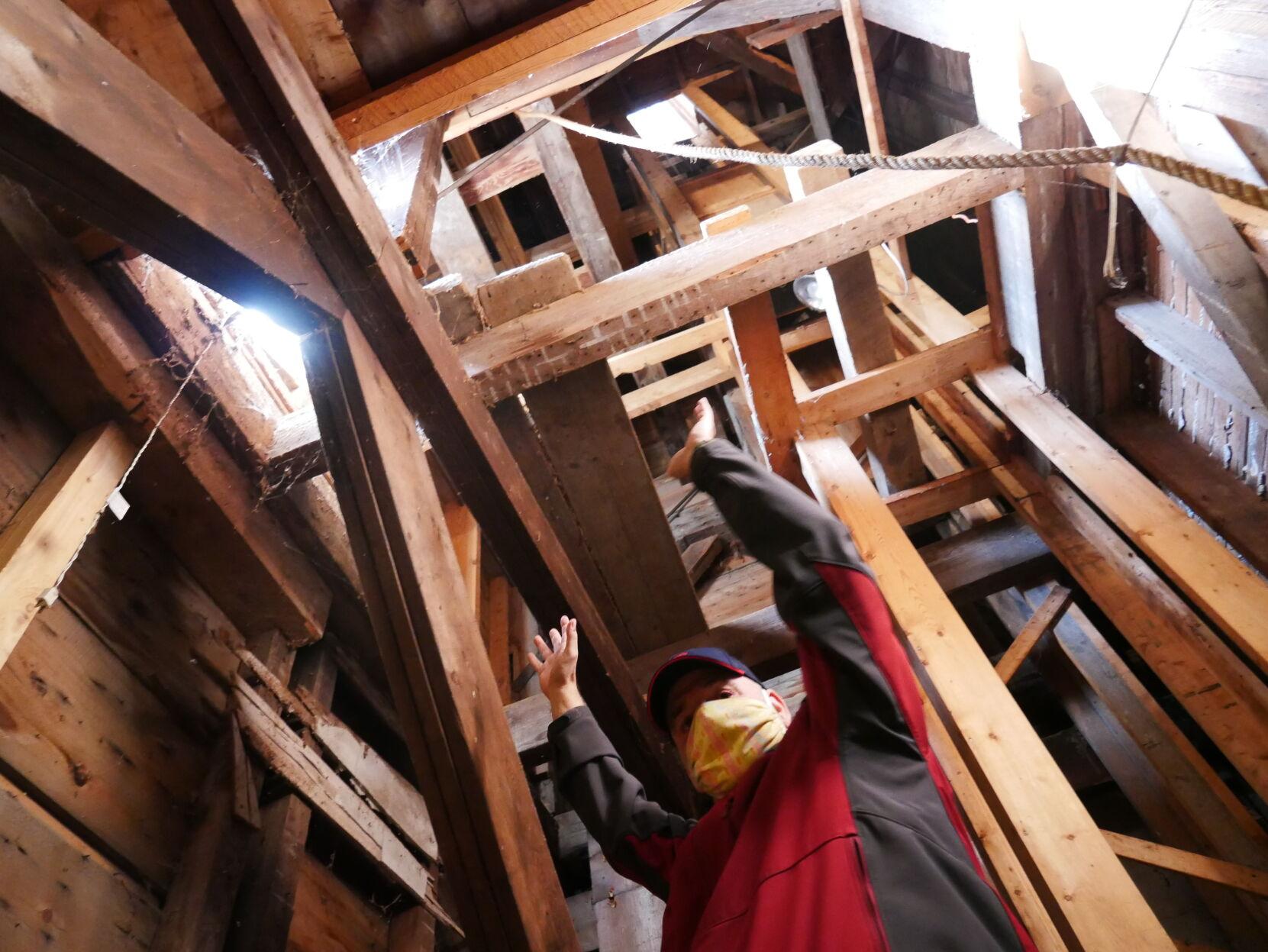 Scott Perry, the chair of Montgomery’s historical society, describes some of the work done to restore Pratt Hall’s defining clocktower in the years following the historical society’s acquisition of the church in the 1970s.

While Perry, a relative newcomer to Montgomery, arrived long after the historical society agreed to purchase St. Bartholomew’s church, he affirmed the building was a “critical ingredient of who we were and who we are,” quoting the historical society’s grant applications for Pratt Hall’s restoration.

“Keeping this building in great shape and using it matters because it is a critical ingredient of who we were and who we are,” an excerpt from the application, sent to the Messenger read.

“It connects us to our past and to each other,” the excerpt continues, “and as sociologists warn, this social capital and connectedness is a critical ingredient for strong communities and social networks.”

Put more plainly, Perry told the Messenger during a tour on Wednesday the building was a means of “connecting our past and our future.” “A lot of people have personal memories tied to this place,” Perry said. “Some people were married here.”

Perry recounted stories locals had shared with him, from farmers who timed their chores to the tolls of St. Bartholomew’s chimes to parents who scheduled summertime lunches around the Episcopalian church’s 1 p.m. ring.

“This is a community landmark and a jewel,” Perry said, “and we need to keep it here for everybody.” 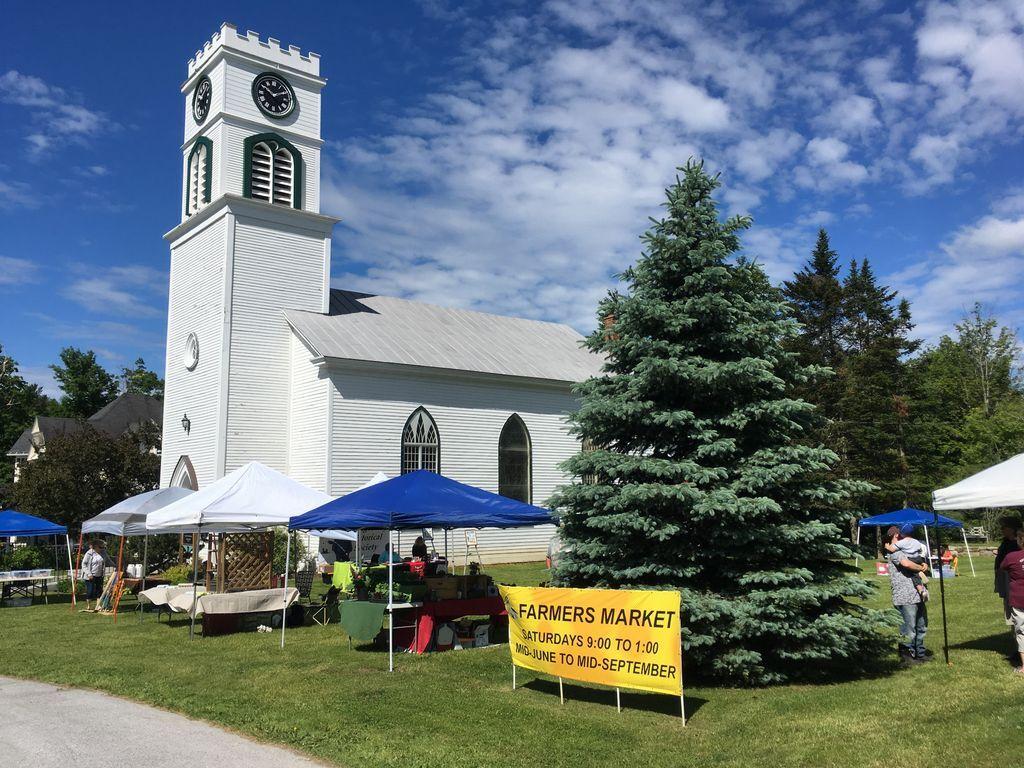 In recent years, Pratt Hall has become the home of Montgomery’s farmers market. 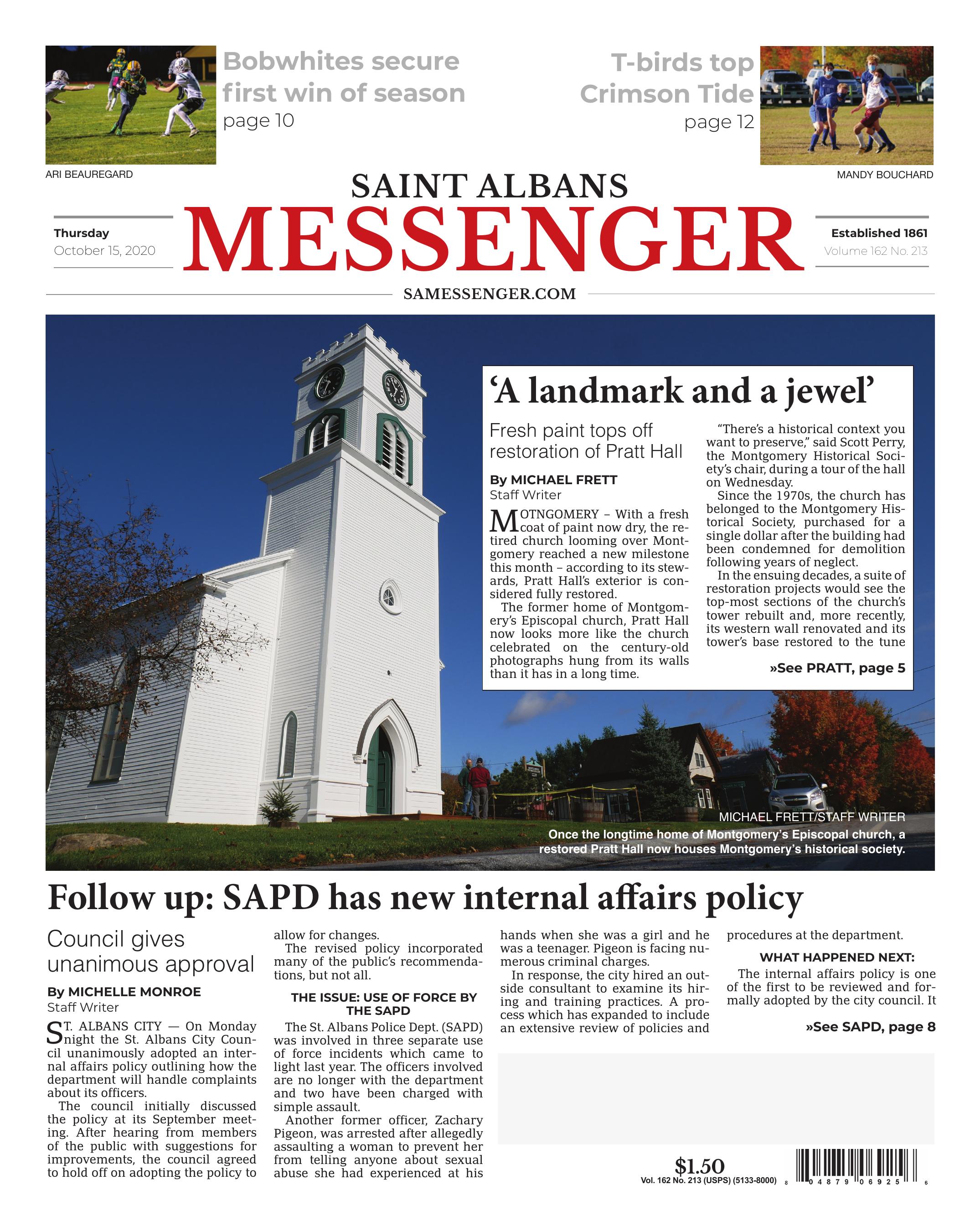