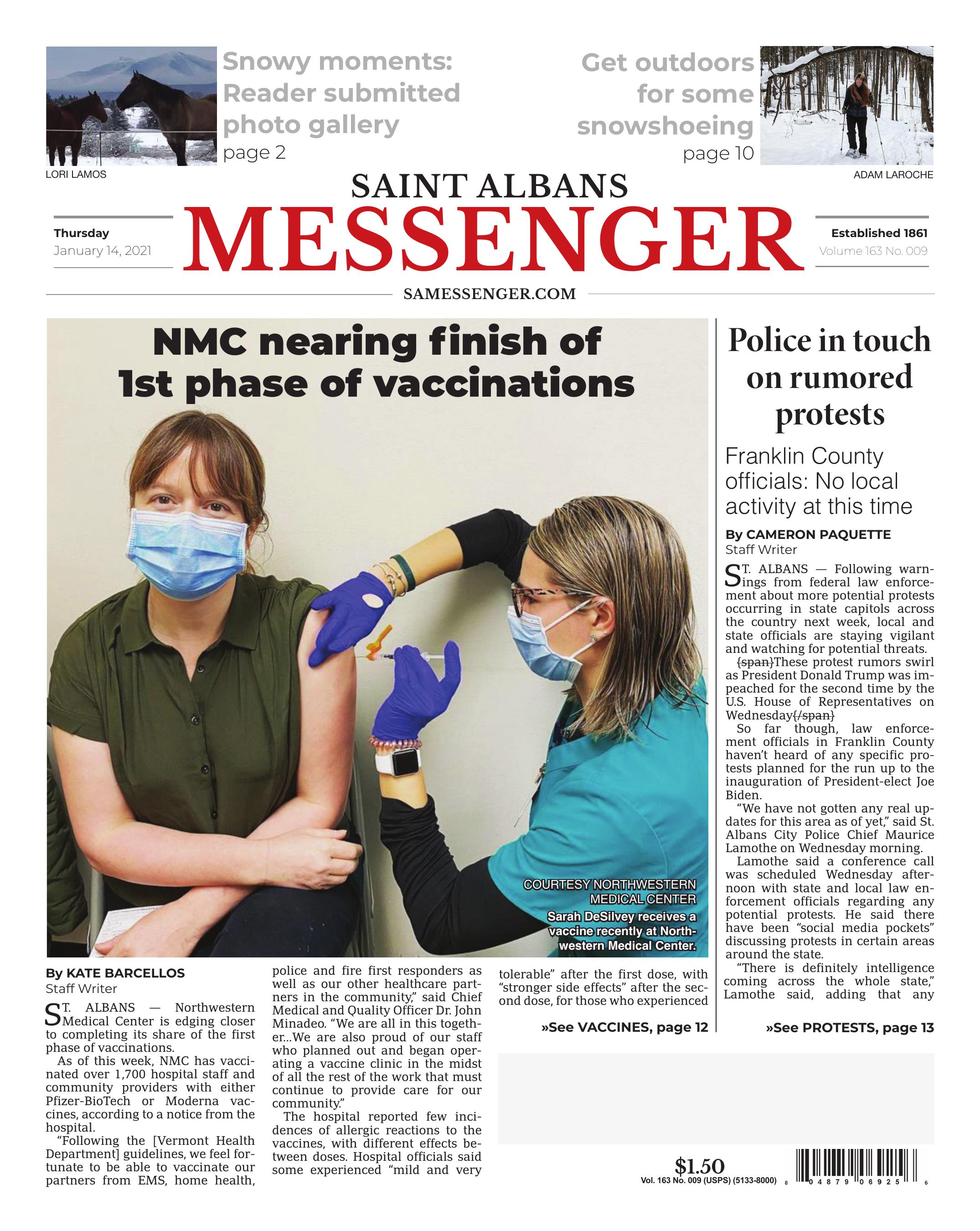 ST. ALBANS — Northwestern Medical Center is edging closer to completing its share of the first phase of vaccinations.

As of this week, NMC has vaccinated over 1,700 hospital staff and community providers with either Pfizer-BioTech or Moderna vaccines, according to a notice from the hospital.

“Following the [Vermont Health Department] guidelines, we feel fortunate to be able to vaccinate our partners from EMS, home health, police and fire first responders as well as our other healthcare partners in the community,” said Chief Medical and Quality Officer Dr. John Minadeo. “We are all in this together...We are also proud of our staff who planned out and began operating a vaccine clinic in the midst of all the rest of the work that must continue to provide care for our community.”

The hospital reported few incidences of allergic reactions to the vaccines, with different effects between doses. Hospital officials said some experienced “mild and very tolerable” after the first dose, with “stronger side effects” after the second dose, for those who experienced symptoms at all.

“All were able to be cared for safely and efficiently,” the hospital stated.

In a press conference on Tuesday, Vermont Health Commissioner Dr. Mark Levine said there is a 15-minute observation period following dosing in case of an adverse reaction.

Since the vaccine clinic was launched on Dec. 16, nearly 900 of the vaccinations went to various community healthcare workers, and the rest were administered to staff associated with NMC

“We’ve been really pleased with the level of excitement that NMC’ers and community healthcare workers are showing when they get vaccinated,” said Jess Aboelezz, pharmacy manager at NMC. “People are happy to take this step to protect themselves and the community.”

As of Wednesday evening, the Vermont Health Department reported that over 29,000 doses of the vaccine had been given statewide, almost 24,000 vaccinations that had began and almost 3,000 that had been completed.

According to the state vaccine dashboard, 6.2% of Franklin County residents to receive a vaccine identified as women, while 1.8% of vaccinated individuals are men.

Due to supply and demand, NMC and others throughout the state have been adhering to strict guidelines from the Vermont Department of Health in order to vaccinate as many people as are willing to receive the vaccine, according to the hospital, and guidelines are subject to frequent change.

Phase 1A of the state’s vaccine rollout expanded doses to all healthcare workers who work directly with patients, which included facility staff, EMS staff, primary and dental care facilitators and home health care such as visiting nurse and hospice care workers.

For every dose released to states, the federal government holds a dose so that those who receive the first dose are ensured a second dose for full vaccination, according to Levine.

Planning for the next phase of vaccines is in the works, NMC said, and the hospital continues to adhere to guidance from the health department to prioritize older populations of Vermonters whose health or condition may put them at a higher risk of fatality as a result of contracting the virus. Levine and other state officials said during Tuesday’s press conference that the state will unveil more information about Phase 1B on Friday, which focuses on distributing vaccines based on age groups, starting with those age 75 and older.

All Vermonters are encouraged to remain vigilant for updates regarding vaccination, rates and health risks, and all members of the Phase 1A cohort of professionals to receive vaccinations who have not yet done so are urged to contact NMC or another medical facility regarding the planning of a vaccination appointment, the release said.

Vermont remains second in the USA for the number of vaccinations administered per 100,000 people, according to NMC.

St. Albans Police Department Cpl. Kristine Koch is pictured with a protective facemask in her cruiser in April 2020. Local and state law enforcement are keeping an eye out amid reports of potential armed protests nationwide in the days leading up to inauguration day.

ST. ALBANS — Following warnings from federal law enforcement about more potential protests occurring in state capitols across the country next week, local and state officials are staying vigilant and watching for potential threats.

These protest rumors swirl as President Donald Trump was impeached for the second time by the U.S. House of Representatives on Wednesday.

So far though, law enforcement officials in Franklin County haven’t heard of any specific protests planned for the run up to the inauguration of President-elect Joe Biden.

“We have not gotten any real updates for this area as of yet,” said St. Albans City Police Chief Maurice Lamothe on Wednesday morning.

Lamothe said a conference call was scheduled Wednesday afternoon with state and local law enforcement officials regarding any potential protests. He said there have been “social media pockets” discussing protests in certain areas around the state.

“There is definitely intelligence coming across the whole state,” Lamothe said, adding that any intelligence regarding potential local protests will be shared with city leaders.

“We’re just trying to get ahead of it,” he said.

Following the events of Jan. 6, when protestors stormed the U.S. Capitol Building as Congress worked to certify Biden’s victory, the FBI warned that protests were planned in state capitols nationwide from Jan. 16 through inauguration day, Jan. 20, according to media reports. Five people died as a result of the riots last week in Washington, D.C.

At the state level, Vermont Department of Public Safety Commissioner Mike Schirling said officials are “in close coordination with federal state and local authorities.” During a press conference Tuesday, Schirling said there were no indications of disruption in Vermont.

Gov. Phil Scott said that while protesters have a First Amendment right to free speech, Vermonters should understand why they are protesting, citing information that protests are being billed as Second Amendment rallies.

“My fear is they’re using law-abiding citizens who believe in the Second Amendment, and using them as pawns in this scheme to cause disruption and overthrow the government,” Scott said. “That’s my biggest fear, is that Vermonters are being duped.”

Deb Billado, chair of the Vermont GOP, released a statement Tuesday urging those considering attending any potential protest to do so peacefully — and unarmed.

“First, I want to stress that to my knowledge, not one Republican I know has plans to attend, or has any interest in attending such an event here in Vermont. While Vermont holds a proud tradition of a right to bear arms, doing so at this rally in our current climate in light of what happened last week would demonstrate an incredible lapse of judgement,” Billado said in the statement.

Lamothe on Wednesday said he is “all for peaceful protest and people peacefully speaking their mind,” but what happened in the nation’s capitol is crossing a line.

“Even outside of hearing anything, we’re not naive. Anything that happens nationally happens in New England, happens in Vermont, happens in Franklin County,” he said. “We as a community and as a police department have to prepare for anything that can occur.”

Swanton Police Chief Leonard Stell said there hasn’t been any “actionable intelligence” regarding any potential local protests, but urged anyone who has heard of any such events — whether in Swanton or elsewhere in Vermont — to call their local law enforcement officials.

“It’s pretty tragic and upsetting what we saw the other day … that people would stoop to that level,” Stell said of the events of Jan. 6.

Lt. Jerry Partin, station commander at the Vermont State Police St. Albans barracks, said as of Wednesday he has not heard word of a protest in St. Albans.

“I’ll be keeping my fingers crossed that everything’s peaceful,” he said of the days leading up to inauguration day.