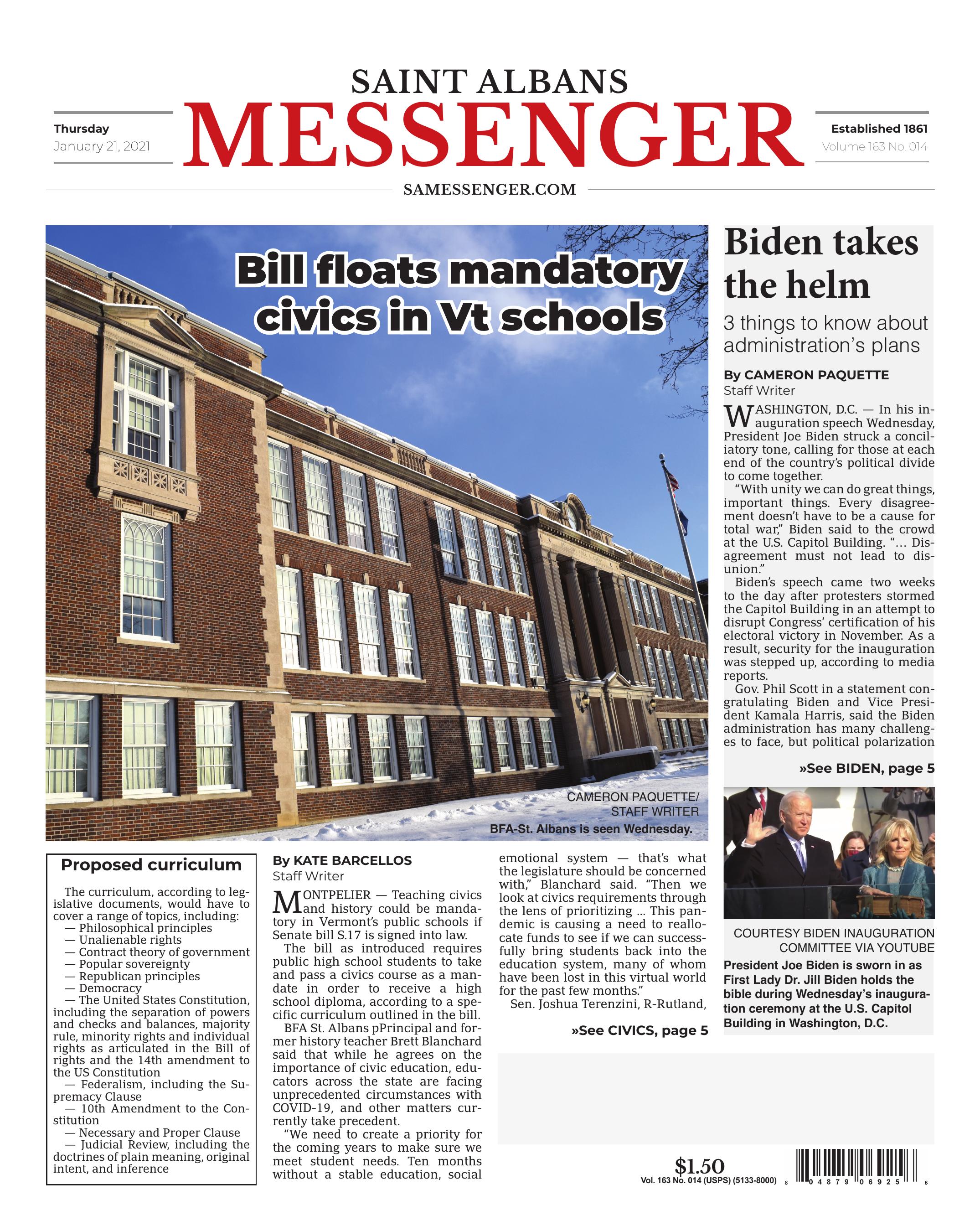 MONTPELIER — Teaching civics and history could be mandatory in Vermont’s public schools if Senate bill S.17 is signed into law.

The bill as introduced requires public high school students to take and pass a civics course as a mandate in order to receive a high school diploma, according to a specific curriculum outlined in the bill.

BFA St. Albans Principal and former history teacher Brett Blanchard said that while he agrees on the importance of civic education, educators across the state are facing unprecedented circumstances with COVID-19, and other matters currently take precedent.

“We need to create a priority for the coming years to make sure we meet student needs. Ten months without a stable education, social emotional system — that’s what the legislature should be concerned with,” Blanchard said. “Then we look at civics requirements through the lens of prioritizing ... This pandemic is causing a need to reallocate funds to see if we can successfully bring students back into the education system, many of whom have been lost in this virtual world for the past few months.”

“Our country is divided more so than any time in my generation,” Terenzini said in an interview Wednesday. “It’s important to see that, beyond our personal opinions our nation is delicate and precious and needs to be preserved...teaching civics is important, because it is important to know where we came from, where we are...and that our nation’s future is largely in our hands.”

Terenzini, who was first sworn in to the Rutland Town Selectboard on the weekend of his 21st birthday, said he deeply believes in the mission of civic education and civic duty, and the imssion of empowering young minds to serve as representatives in government.

“Those young minds in those classrooms — nobody should be counted out,” Terenzini said. “We need young voices, young minds, and for them to know that you can get elected to senate at 33 if you put your mind to it.”

The curriculum, according to legislative documents, would have to cover a range of topics, including:

— The United States Constitution, including the separation of powers and checks and balances, majority rule, minority rights and individual rights as articulated in the Bill of rights and the 14th amendment to the US Constitution

— Federalism, including the Supremacy Clause

— 10th Amendment to the Constitution

— Judicial Review, including the doctrines of plain meaning, original intent, and inference

Fairfax School Board Chair Scott Mitchell said he thought the concept of the bill was sound, but the effectiveness of the lesson would depend heavily on how it is taught and how it touched on current events, socioeconomics and progressive movements.

“If it can be presented and taught in a neutral fashion, I think that’s great,” Mitchell said.

Mitchell remarked about how traditional civic lessons could potentially become contentious, and that with the rapid spread of social movements and online information, educators needed to be well read on the topics of discussion outside of the classroom in the sociopolitical sphere in order to keep the lessons relevant.

Terenzini said concentration on simple historical facts, constitutional knowledge and American civics should remain the focus of the curriculum, unaffiliated with partisan politics, and stressed his concern that students run the risk of acquiring a false sense of understanding of the historical and civic context.

“It’s a real problem,” Terenzini said. “Students should leave high school with a solid understanding with what a privilege it is to live in the greatest country in the world.”

Blanchard reflected on what he called the “burden of the pandemic” that was laid on students, educators and members of the educational community who have had to adjust frequently and on a broad scale, while trying to meet the expectations of the government and abide by educational law.

“I would like the legislature to discuss how they are going to give resources to schools,” Blanchard said. “Don’t saddle us with one more requirement while we’re working through this. Let’s discuss the civics requirement at a later date ... We must produce civics aware students but understand what it means to be a part of a local and global citizenship. That’s very important.”

The bill, if signed into law, would be slated to take effect on July 1, and shall apply to high school students who graduate in or after the 2023-2024 academic year, documents read.

Vice President Kamala Harris is sworn in during Wednesday’s inauguration ceremony at the U.S. Capitol Building in Washington, D.C.

WASHINGTON, D.C. — In his inauguration speech Wednesday, President Joe Biden struck a conciliatory tone, calling for those at each end of the country’s political divide to come together.

“With unity we can do great things, important things. Every disagreement doesn’t have to be a cause for total war,” Biden said to the crowd at the U.S. Capitol Building. “… Disagreement must not lead to disunion.”

Biden’s speech came two weeks to the day after protesters stormed the Capitol Building in an attempt to disrupt Congress’ certification of his electoral victory in November. As a result, security for the inauguration was stepped up, according to media reports.

Gov. Phil Scott in a statement congratulating Biden and Vice President Kamala Harris, said the Biden administration has many challenges to face, but political polarization is chief among them.

“President Biden campaigned on bringing people together, working across the aisle and uniting our nation — that is how he earned my vote,” Scott said. “After years of intentional division and polarization, driven by the extremes, it is essential that he delivers on that promise — even in the face of the very hostility he has pledged to address.”

While political division in the U.S. has been identified as a key challenge, there are a number of other initiatives the Biden administration is reportedly looking to tackle right out of the gate.

Here are three actions the administration is reportedly looking at and how Vermont may be impacted:

In December, Biden said he would move to significantly increase vaccine distribution, targeting 100 million shots administered in his first 100 days. To do this, the administration plans to invest $25 billion in vaccine manufacturing and distribution programs, according to the administration’s plan listed on the White House website.

Vermont officials have said that the state’s distribution plan is heavily tied to the rate at which the federal government is distributing doses. The state is currently finishing up the first phase of vaccine rollout, with the second phase, expanding eligibility to those age 75 and older, set to begin next week.

While other states have broadened eligibility at a quicker rate, Vermont officials say they don’t want to overpromise as the state’s weekly vaccine allotment has fluctuated, decreasing from the initial 11,000 doses per week to just under 9,000. State officials have said they are prioritizing Vermonters who are most at risk of a fatal outcome if they contract COVID-19.

Scott has said Vermont has the capacity to scale up its vaccine distribution program if supply from the federal government increases.

The Biden administration is reportedly looking to rejoin both the World Health Organization (WHO) and Paris Climate Accord, according to numerous national and international media outlets.

The U.S. pulled out of the Paris Climate Accord in President Donald Trump’s first year in office, and pulled out of the WHO in the initial months of the COVID-19 pandemic. Both actions were condemned by Vermont leaders and legislators.

“In a global pandemic that in 100 days has killed more Americans than died in Vietnam and Korea and is predicted to kill thousands more, we need every weapon in our arsenal,” Sen. Patrick Leahy, D-Vt., said in May in a statement. “Now is the worst possible time to withdraw from the World Health Organization, which coordinates the coronavirus response and which the world depends on for expertise on everything from deadly respiratory infections to polio.”

In response to the U.S. pulling out of the Paris Climate Accord in 2017, Scott joined fellow Republican Gov. Charlie Baker, of Massachusetts, in writing a letter to the administration requesting that the U.S. maintain its commitment to the accord.

“Vermont has taken a leadership role in addressing climate change, and the President’s decision today only strengthens our commitment,” Scott said in a June 2017 statement. “We have strong, regional multi-state partnerships through the Coalition of Northeast Governors (CONEG) and have made much progress in reducing the region’s carbon emissions, and we will maintain this work because it is the right and responsible thing to do.”

The Biden administration is reportedly looking at re-implementing and extending a moratorium on evictions and foreclosures, including for federally-backed mortgages, until at least March 31.

The measure would reinforce a bill passed by the Vermont legislature and signed into law in May 2020 that placed a moratorium on ejectment and foreclosure actions in the Green Mountain State as a result of the COVID-19 pandemic. That law is in effect until 30 days after the governor terminates the state of emergency declaration in Vermont.