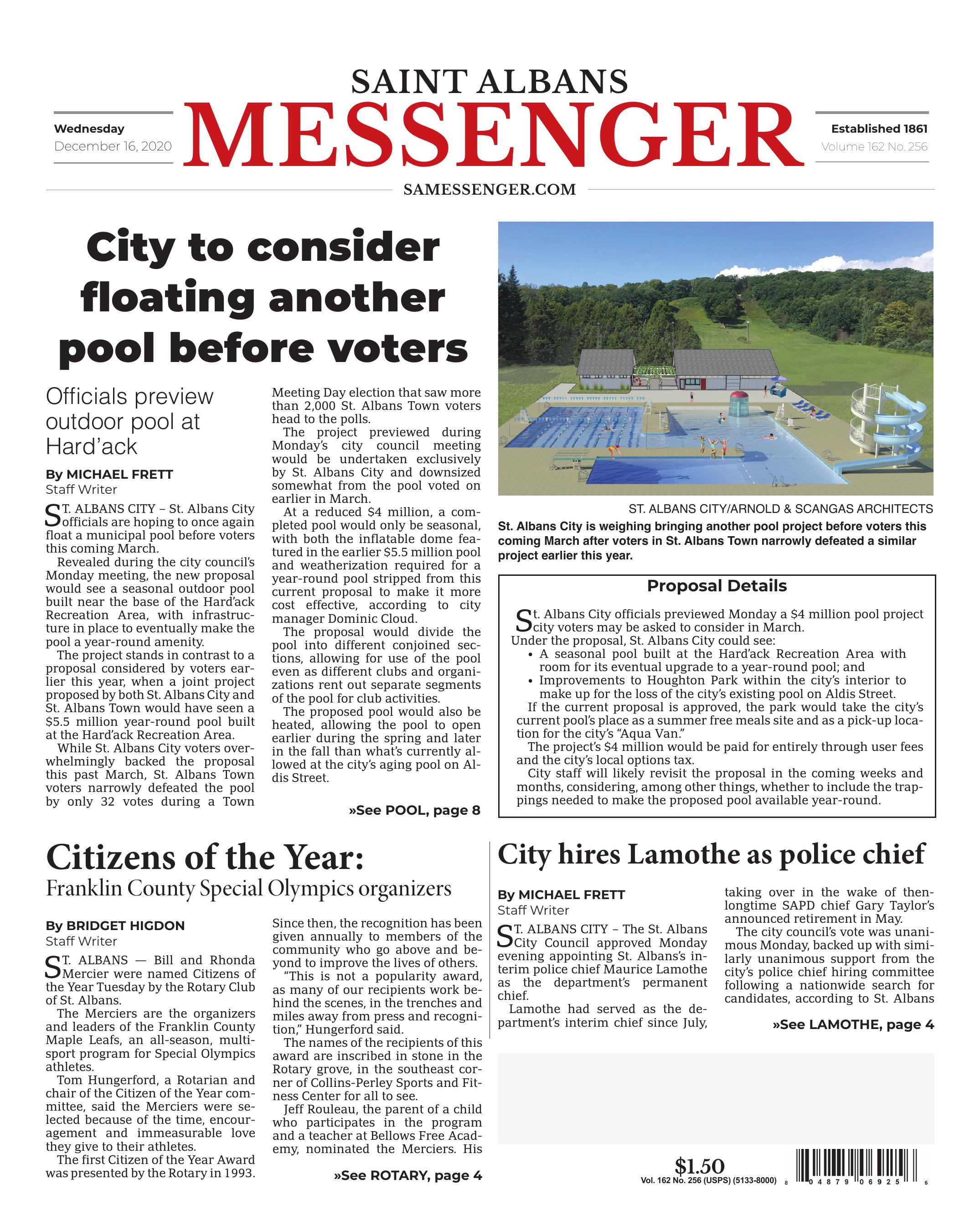 Revealed during the city council’s Monday meeting, the new proposal would see a seasonal outdoor pool built near the base of the Hard’ack Recreation Area, with infrastructure in place to eventually make the pool a year-round amenity.

The project stands in contrast to a proposal considered by voters earlier this year, when a joint project proposed by both St. Albans City and St. Albans Town would have seen a $5.5 million year-round pool built at the Hard’ack Recreation Area.

The project previewed during Monday’s city council meeting would be undertaken exclusively by St. Albans City and downsized somewhat from the pool voted on earlier in March.

At a reduced $4 million, a completed pool would only be seasonal, with both the inflatable dome featured in the earlier $5.5 million pool and weatherization required for a year-round pool stripped from this current proposal to make it more cost effective, according to city manager Dominic Cloud. 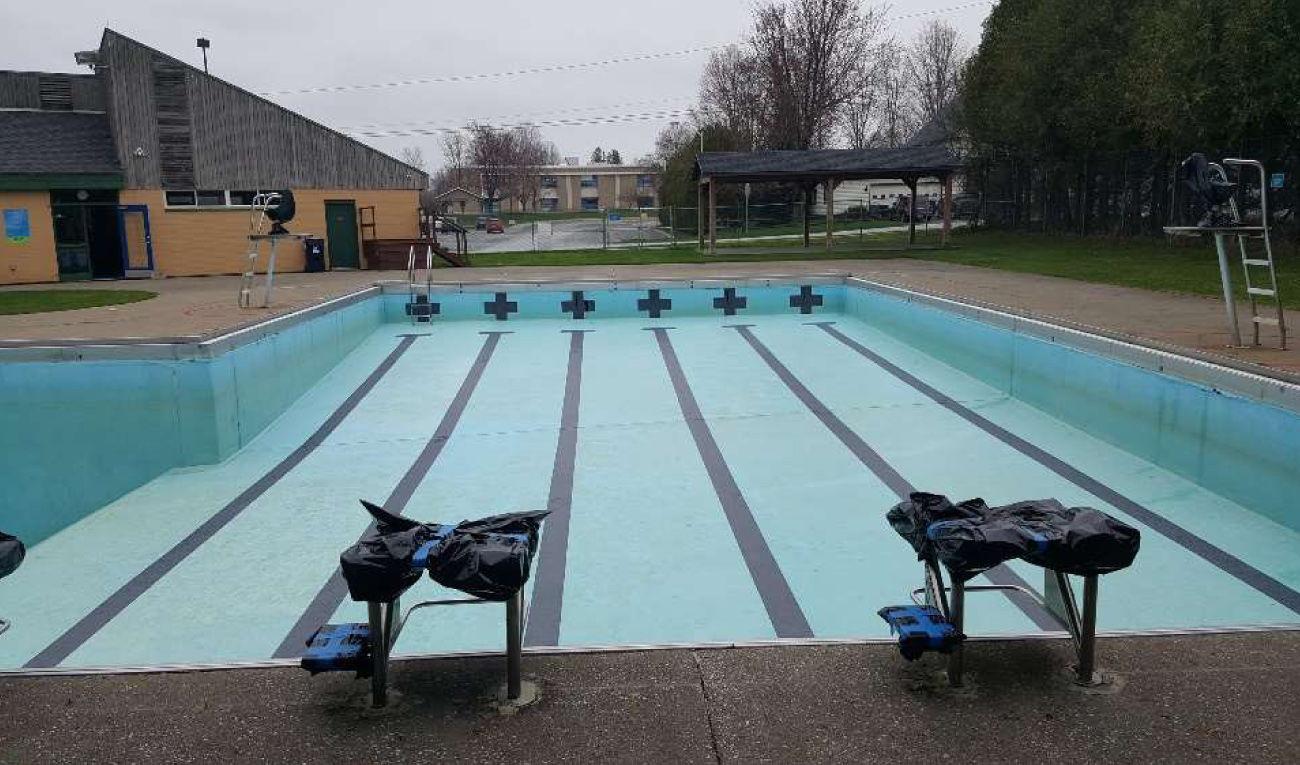 The proposal would divide the pool into different conjoined sections, allowing for use of the pool even as different clubs and organizations rent out separate segments of the pool for club activities.

The proposed pool would also be heated, allowing the pool to open earlier during the spring and later in the fall than what’s currently allowed at the city’s aging pool on Aldis Street.

Also included in the city’s new pool proposal would be approximately $250,000 for improvements to Houghton Park, billed by city officials as a way to still provide public recreation options in St. Albans City’s west should the city’s pool moves east to Hard’ack.

Those improvements, according to Cloud, would include improvements to facilities currently at the park, as well as the addition of a splash pad and recreational staff.

Houghton Park, according to city officials, would be able to take the city’s current municipal pool’s place as a free summer meals site for children and teenagers, as well as a possible pick-up site for the city’s “Aqua Van,” which would help shuttle kids from around St. Albans City to the pool.

City officials have stressed the need for replacing their current pool, a 40-year-old structure now well past its suggested 25-year lifespan. Conditions were bad enough at the pool that, during the run-up to this year’s Town Meeting Day vote, city officials said they’re regularly forced to weigh its closure. 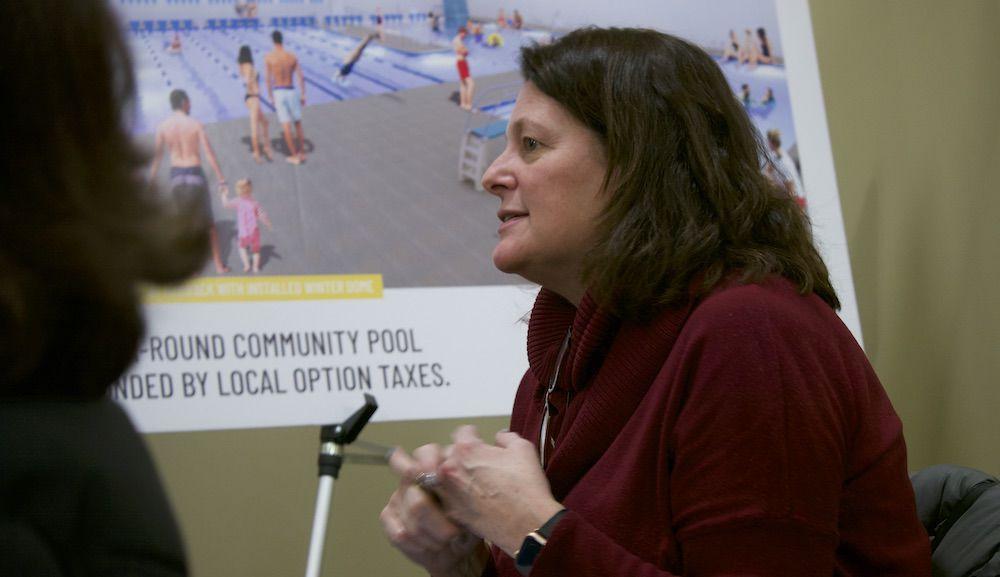 If approved, bonding for the project would be serviced through user fees from out-of-town visitors to the pool and through the St. Albans City’s local options tax, a 1 percent sales tax charged on most purchases made within St. Albans City that, according to city officials, appeared poised to “overperform” this year given recorded revenue from a similar statewide sales tax.

“The sales and use tax has just been going gangbusters,” Cloud said. “All indications are we’re in a substantially better position on the local options tax.”

While the city council seemed supportive of returning a pool proposal to voters after the project’s defeat in St. Albans Town earlier this year, some wondered whether it was worth getting rid of the inflatable dome and weatherization that would’ve made the former proposed pool available year-round.

Some feared a possible loss of support from St. Albans City voters if the pool proposed by officials would only be available seasonally. “The dome was what made the project,” said Tim Smith, the city’s mayor.

Officials are likely to return to the proposal in the coming weeks and months. St. Albans’s city council has until January to make a final decision about whether to bring a pool before voters on Town Meeting Day.

If approved by voters this coming March, the city’s new pool would likely be ready for use by 2022.

Under the proposal, St. Albans City could see:

If the current proposal is approved, the park would take the city's current pool's place as a summer free meals site and as a pick-up location for the city's "Aqua Van."

The project's $4 million would be paid for entirely through user fees and the city's local options tax.

City staff will likely revisit the proposal in the coming weeks and months, considering, among other things, whether to include the trappings needed to make the proposed pool available year-round.

Bill and Rhonda Mercier are the Rotary Club of St. Albans’ Citizens of the Year.

ST. ALBANS — Bill and Rhonda Mercier were named Citizens of the Year Tuesday by the Rotary Club of St. Albans.

The Merciers are the organizers and leaders of the Franklin County Maple Leafs, an all-season, multi-sport program for Special Olympics athletes.

Tom Hungerford, a Rotarian and chair of the Citizen of the Year committee, said the Merciers were selected because of the time, encouragement and immeasurable love they give to their athletes.

The first Citizen of the Year Award was presented by the Rotary in 1993. Since then, the recognition has been given annually to members of the community who go above and beyond to improve the lives of others.

“This is not a popularity award, as many of our recipients work behind the scenes, in the trenches and miles away from press and recognition,” Hungerford said.

The names of the recipients of this award are inscribed in stone in the Rotary grove, in the southeast corner of Collins-Perley Sports and Fitness Center for all to see.

Jeff Rouleau, the parent of a child who participates in the program and a teacher at Bellows Free Academy, nominated the Merciers. His nomination, and all others, were reviewed by the Citizen of the Year committee, who made a recommendation to the Rotary board of directors. The board voted on the winner.

Kasia Bilodeau, a long-time colleague of Bill’s, was among many community members who helped present the Merciers with the award during a virtual ceremony.

“I don’t know where Special Olympics in Franklin County would be if these two people weren't doing what they do.”

“Bill brings his laughter, his ability to lighten the load and have fun all the time,” she said. “Both of them bring so much to every game and practice. They make sure our athletes are being good citizens.”

Depending on the season, the Maple Leafs Special Olympics team offers a variety of sports including soccer, bocce, softball and basketball. The team participates in local and statewide competitions.

Jim Naylor, a special educator for third through fifth grade students at Fairfield Center School, has also worked extensively with Bill and Rhonda.

“They have been completely selfless with their time, with their space,” Naylor said. “They are not only coaches, they are advocates for the athletes they support. They are respite providers.”

Many of the event’s speakers noted that the Mericiers wear many hats. Not only are they coaches, standing eagerly in the dugout or on the sideline, they are chaperones who spend hours traveling on buses with their athletes. They are the organization’s chief fundraisers and recruiters, planning Calcuttas and auctions to raise money for equipment and uniforms.

Lynn Orton and her son Dayton, a member of the Maple Leaf team, said Bill and Rhonda make them feel like extended family.

“The group we have in Franklin County is ginormous,” Orton said. “I can’t believe the organization, the fundraising, everything that goes into doing what they do for the group.”

Dayton is grateful to the Merciers for the opportunity they gave him to not only participate in multiple sports, but to make friends. He sees Bill as a role model.

It’s extremely rewarding, Bill said, to see the athletes, whether they win or lose, walk into a room “with their swag on.”

Rouleau, whose son Derek plays on the Maple Leaf bocce team, got slightly emotional while speaking. He said the Merciers’ encouragement and positivity changed his son’s life.

“All organizations need somebody who is going to be the cheerleader, the person who sort of makes it happen,” Rouleau said. “I don’t know where Special Olympics in Franklin County would be if these two people weren’t doing what they do.”

Lamothe had served as the department’s interim chief since July, taking over in the wake of then-longtime SAPD chief Gary Taylor’s announced retirement in May.

“He’s inspired my confidence and I think many in the public as well as he has embraced the transformation road map the council laid out and immediately put into practice some of the principles of 21st century policing,” Cloud said. “We couldn’t have asked for more over the last six months.”

Prior to his work with SAPD, Lamothe spent nearly two decades with the Vermont State Police, ultimately retiring in 2019 after serving almost five years as the St. Albans Barracks’ station commander.

Lamothe was working as SAPD’s dispatch director before he was appointed to serve as Taylor’s replacement.

Lamothe’s appointment as interim chief came as SAPD saw wider public scrutiny in the wake of several high profile use-of-force incidents and the arrest of an off-duty SAPD officer under kidnapping and assault charges after an alleged attempt to silence a woman he had reportedly sexually abused as a teenager. 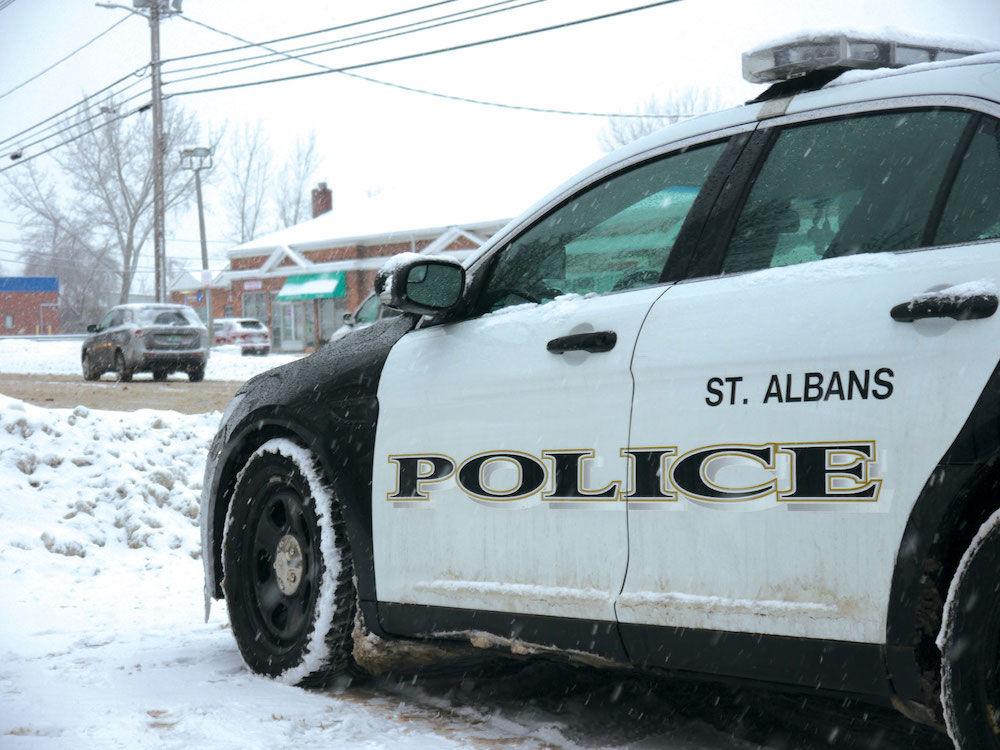 Lamothe’s appointment also comes amid national conversations concerning the role of police departments following the death of George Floyd, an unarmed Black man who died after an officer from the Minneapolis Police Department pressed their knee into his neck for almost nine minutes.

Those conversations ultimately came to St. Albans this summer and, in some places, remain ongoing, most recently with the Maple Run Unified School District’s formation of an advisory group examining the St. Albans and Fairfield school district’s current use of school resource officers.

On Monday, Lamothe’s interim leadership at the department was celebrated both by the city’s mayor, Tim Smith, and several members of the St. Albans City Council who spoke on behalf of voters within their respective wards.

“I heard from folks in my neighborhood about how supportive they were of ‘Chief Mo’ as acting chief,” councilor Mike McCarthy, Ward 4, said, referring to Lamothe by a popular nickname.

“I, too, have heard from folks in my ward who are very happy with ‘Mo’ and the direction of the police department in the last six months,” councilor Chad Spooner, Ward 6, said, later adding, “I think this is a great decision.”

“I, too, have heard from a number of people who like what ‘Mo’ stands for and his skills,” Smith said. “I’m excited about it and I think it’ll be great for the community.”

Lamothe, present during Monday’s meeting, said he “really appreciate[ed]” the council’s confidence in him but added “this wasn’t [him] doing this.”

“This is the department doing this and the city doings this – I’m just steering the ship,” Lamothe told the city council Monday. “We are going in the right direction.”

Lamothe also promised the department had “some plans to continue building on our community policing” going forward, warning, however, those steps would “take some time.” 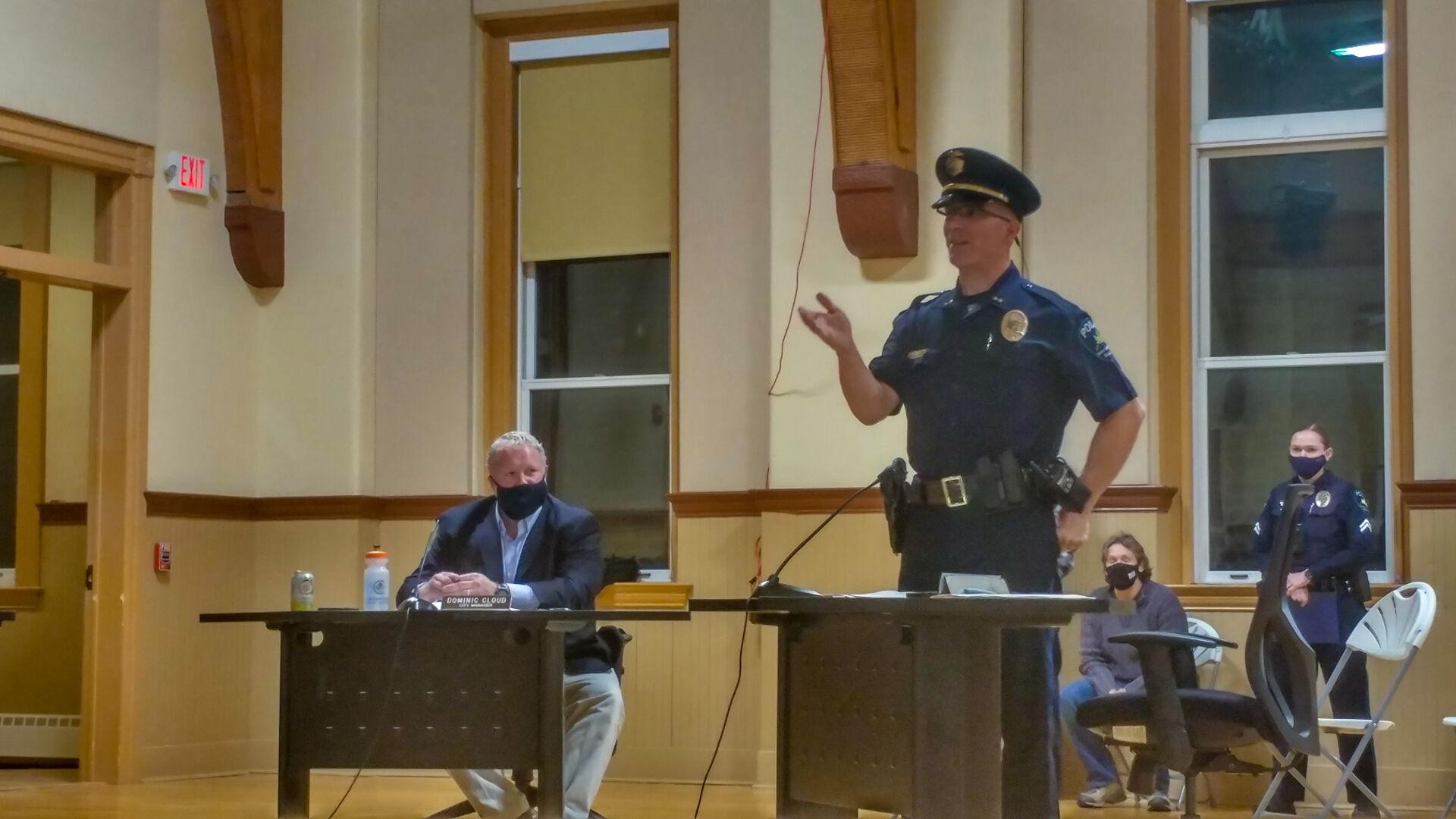 Lamothe was selected from a pool of roughly 20 candidates following a national search modeled after the City of Montpelier’s recent search for a police chief, according to St. Albans’s city manager Cloud.

He was selected with the approval of a formal search committee staffed with representatives from Northwestern Counseling and Support Services and the Maple Run school district, as well as an SAPD officer, a member of the public and a member of the city’s police advisory commission, Cloud said.

Alongside its duties in St. Albans City, SAPD is currently contracted to police St. Albans Town until this coming July, when the Franklin County Sheriff’s Office will assume policing duties in the town.

SAPD is also contracted to provide policing services to the nearby Town of Highgate.