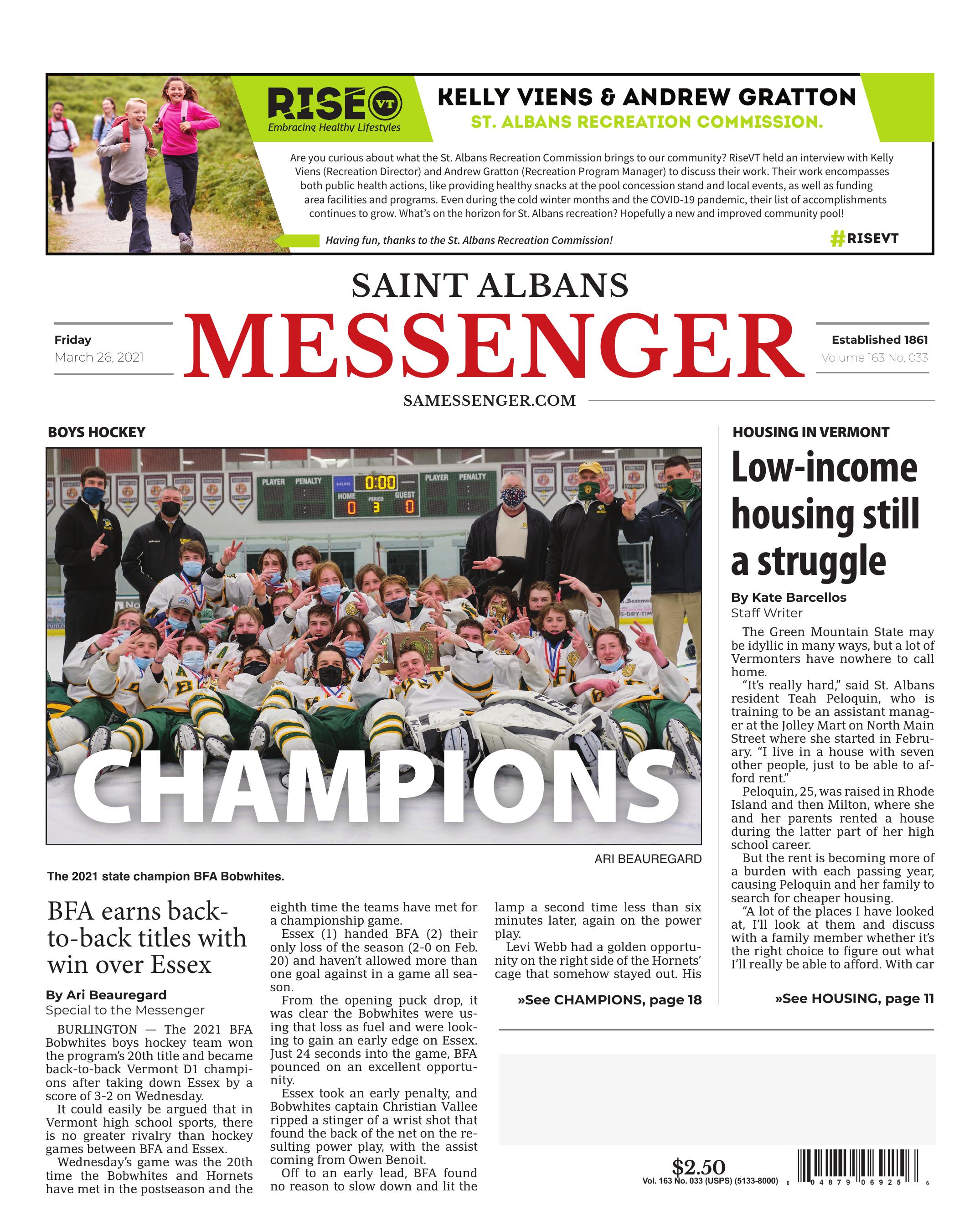 Bobwhite senior captain, Christian Vallee, celebrates his goal, the first in the D1 title game against rival Essex at Leddy on Wednesday evening.

Owen Benoit, who scored the game-winning goal for the Bobwhites, skates past an Essex defender.

Michel Telfer and the Bobwhites wait for the go-ahead to take the ice before the 2021 Vermont D1 Hockey State Championship game.

BURLINGTON — The 2021 BFA Bobwhites boys hockey team won the program’s 20th title and became back-to-back Vermont D1 champions after taking down Essex by a score of 3-2 on Wednesday.

It could easily be argued that in Vermont high school sports, there is no greater rivalry than hockey games between BFA and Essex.

Wednesday’s game was the 20th time the Bobwhites and Hornets have met in the postseason and the eighth time the teams have met for a championship game.

From the opening puck drop, it was clear the Bobwhites were using that loss as fuel and were looking to gain an early edge on Essex. Just 24 seconds into the game, BFA pounced on an excellent opportunity.

Essex took an early penalty, and Bobwhites captain Christian Vallee ripped a stinger of a wrist shot that found the back of the net on the resulting power play, with the assist coming from Owen Benoit.

Off to an early lead, BFA found no reason to slow down and lit the lamp a second time less than six minutes later, again on the power play.

Levi Webb had a golden opportunity on the right side of the Hornets’ cage that somehow stayed out. His rebound made it to Matt Merrill, who was also denied.

Webb, undeterred, managed to pick himself up and collect Merrill’s rebound, pulling the puck around and finding more success on the other side of the net, making it 2-0 for the Bobwhites. In the second period, BFA got caught on back-to-back penalty kills, and Essex got some puck-luck to go their way, making it a one-goal game.

The third period was played tightly as the next goal was crucial; that goal came with 5:51 left on the clock. BFA was on the power play once again, this time with the goal coming off a snipe from the point by defenseman Owen Benoit.

On that critical goal, Benoit described what he was feeling in that moment following the game as “Pure excitement. That goal was big, if they got that next goal, it’s a tie game. We had to have that goal, and luckily we got it tonight.”

Christian Vallee and Colby Morin each picked up an assist on the play.

Essex scored with 23 seconds left, but that was all BFA would allow them, and the buzzer sounded to give the BFA Bobwhites their 20th state title.

Michel Telfer topped off a stellar first season with a championship as BFA’s starting netminder.

“Focus has been the key for me. Focusing and dialing in for every single game, and I’m really lucky to have a group this great in front of me. They keep shots to the outside and make sure I can see the puck,” said Telfer. “Winning the title, it’s an awesome feeling. After everything we’ve been through, we stayed resilient. Then to have that buzzer sound for us; to get this win, was huge.”

Owen Benoit also spoke on what it felt like to win the state title after battling through an unusual season.

“It feels great; we went through a lot with COVID, and this year was weird. We battled through adversity, and we were able to win. I’m just so proud of the boys this year,” he said.

This season will go down in the history books for a myriad of reasons for the Bobwhites, and it was topped off with a championship game to remember for years to come.

Teah Peloquin poses for a photo outside the Jolley service station on Main Street in St. Albans on Thursday.

The Green Mountain State may be idyllic in many ways, but a lot of Vermonters have nowhere to call home.

“It’s really hard,” said St. Albans resident Teah Peloquin, who is training to be an assistant manager at the Jolley Mart on North Main Street where she started in February. “I live in a house with seven other people, just to be able to afford rent.”

Peloquin, 25, was raised in Rhode Island and then Milton, where she and her parents rented a house during the latter part of her high school career.

But the rent is becoming more of a burden with each passing year, causing Peloquin and her family to search for cheaper housing.

“A lot of the places I have looked at, I’ll look at them and discuss with a family member whether it’s the right choice to figure out what I’ll really be able to afford. With car payments, baby bills, my own bills, things like that ... by the time I do figure out that I can afford it, it’s already gone,” she told the Messenger Wednesday.

Peloquin, like many Vermonters, has been searching for an apartment for her, her son and their two dogs to be able to save up money for a home someday, but for the past three years she and other family members have split payments of $1,400 and $1,500 in rent for a house on High Street in St. Albans.

A report released on March 18 by the National Low Income Housing Coalition shows there are 37 affordable and available homes for every 100 extremely low-income renter households nationally, and 70% are spending more than half of their income on housing expenses, with little left over for other basic necessities.

While Vermont appears to be better than the national average, experts say more needs to be done to continue the state’s progress.

“We’ve long known that Vermont is facing a severe shortage of affordable housing,” said Brian Pine, Interim Coordinator of the Vermont Affordable Housing Coalition. “With an aging rental housing stock and increased pressure on the housing market due to the pandemic, our partners face challenges in helping low-income families secure housing, even when they have rental subsidies. There often simply is no affordable, available housing that meets safety and quality standards.”

And it’s not just the rent: experts say the Vermont real estate market is struggling too, and the rapid sale of homes and transition of Vermonters to less-expensive rentals keeps any rental property in short supply.

“Vermont is experiencing significant increases in real estate values, pricing too many Vermonters out of the market,” said Gus Seelig, executive director of the Vermont Housing & Conservation Board. “With the arrival of federal COVID relief funding in 2020, Vermont was able to address both the immediate need to keep those without homes safe and the underlying shortage of housing by adding 250 new affordable homes and improving 12 shelters with 250 beds. It is imperative that we continue this momentum into 2021.”

According to Census data cited in the “State of Working Vermont 2020” report by Public Assets Institute, Vermont has seen a “dramatic upward redistribution of income” over the last four decades. In 2019, the top 20% of Vermont households received 48.4% of the income earned in the state while the top 5% of households got 20.7%. The report also states the average income for the top 20% of households has increased more than 8% since 2007, while the average income for the bottom 20% actually decreased more than 7%.

The upward shift in income also resulted in the wage gap between high-end workers and those at the bottom widening by more than $5,000 from 2007 to 2019, according to the report. This happened as the active workforce in the state decreased. As of 2019, 342,226 Vermonters were working or actively looking for work — 11,500 fewer than in 2007.

Local builder, landlord, contractor and developer Tyler Stanislas said he tries to keep his rents around $750 to $1,000, but with the rising costs of labor, taxes, bills and building costs, he loses out on hundreds of thousands of dollars every year to keep his current tenants rent-stable.

“At some point, I would like to get my own house. Like the dream house, you know? With three or four bedrooms so my family can visit, maybe a cottage-style or a ranch. With a little picket fence. Something just for us." — Teah Peloquin

In terms of building new homes, Stanislas said the price of materials has increased drastically with rising rates of private development and availability shortage, making it far more difficult to acquire the necessities to build.

Peloquin and her 1-year-old son share a bedroom in the house, and when she had her son the household water costs went up.

Peloquin and her family put plastic wrap on the windows and close off the back porch to try to conserve heat in the house, but the home is older and can be drafty. She said she uses a portion of her earnings to help supply pet food and food for her family, and uses food stamps when she comes up short.

“It’s still not enough,” Peloquin said. “We strive to make a better life, and right now, that’s what I’m doing.”

Many still hold out hope that one day enough will be saved for a down payment on the home they dream of in Vermont, and that, even if there isn’t much to choose from right now, their day — and their home — will come.

“At some point, I would like to get my own house,” Peloquin said. “Like the dream house, you know? With three or four bedrooms so my family can visit, maybe a cottage-style or a ranch. With a little picket fence. Something just for us.”