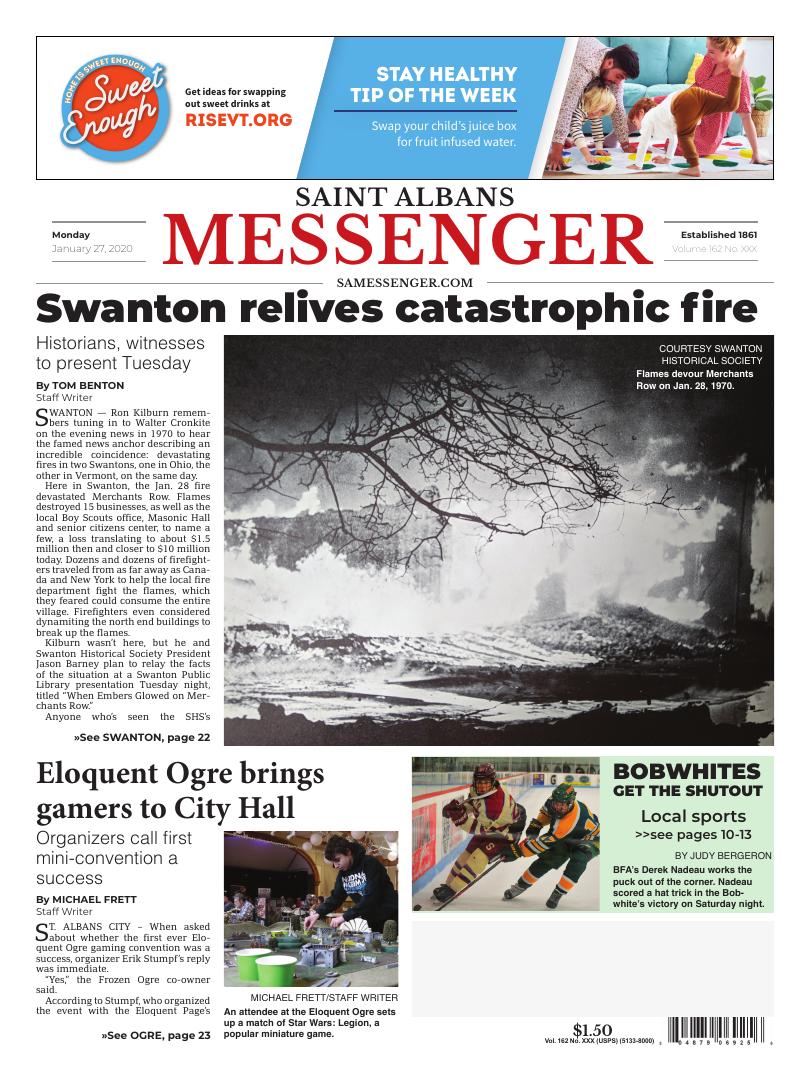 This postcard from the 1970s depicts Merchants Row as it stood before and after the Jan. 28 fire.

A bystander wanders downtown Swanton after the Jan. 28, 1970 fire.

SWANTON — Ron Kilburn remembers tuning in to Walter Cronkite on the evening news in 1970 to hear the famed news anchor describing an incredible coincidence: devastating fires in two Swantons, one in Ohio, the other in Vermont, on the same day.

Here in Swanton, the Jan. 28 fire devastated Merchants Row. Flames destroyed 15 businesses, as well as the local Boy Scouts office, Masonic Hall and senior citizens center, to name a few, a loss translating to about $1.5 million then and closer to $10 million today. Dozens and dozens of firefighters traveled from as far away as Canada and New York to help the local fire department fight the flames, which they feared could consume the entire village. Firefighters even considered dynamiting the north end buildings to break up the flames.

Kilburn wasn’t here, but he and Swanton Historical Society President Jason Barney plan to relay the facts of the situation at a presentation Tuesday night, titled “When Embers Glowed on Merchants Row.”

Anyone who’s seen the SHS’s presentations knows their grip, not based on factual data, but on vivid memories, often from private photographs or pieces of media illustrating the time — and Tuesday night, from firsthand accounts by those who survived the blaze. Kilburn and Barney told the Messenger they’ve invited several business owners, residents, even a couple surviving firefighters to speak Tuesday night.

But the story goes beyond the disaster. Swanton residents were proactive even the next morning, when business owners discussed how they could rebuild, according to Judy Spaulding’s historical account. The Small Business Administration announced disaster loan assistance for Swanton, three per cent loans for repairing or replacing what homes, businesses and personal property the fire destroyed. The Chittenden Trust Company narrowly evaded the flames, took smoke and water damage but opened the next day. Swanton Rexall Drugs reopened in a vacant building, and the York Manufacturing Company announced plans to open the following week.

Crowds came to Swanton to survey the damage, between 15,000-20,000 people, according to Spaulding — who also claimed traffic, at one point, backed up nearly to St. Albans.

Best of all, Merchants Row was rebuilt — with distinctly 1970s architecture — by September. In the span of a human pregnancy, the community restored what about five hours of flames took away.

That seems even more incredible given the context of the fire’s intensity.

A WWSR radio broadcast from the scene provides that context as well as anything. The SHS plans to play that broadcast Tuesday night, amid other news accounts, films, and photographs.

What started the fire is still unclear. We know it began just before 11:00 p.m. in Moose Parah’s Antique & Second Hand Store, despite the fact Parah had only just checked the store two-and-a-half hours before. Eugene Gokey came home from work to smell smoke; Roy Hemingway lived in the neighboring apartment, and could smell it too. They followed the scent to Parah’s store. They could see the flames through the windows.

Gokey and Hemingway did everything right. They rushed back to their apartments, hit the fire alarm, and evacuated their neighbors. The Swanton Volunteer Fire Dept. arrived just 15 minutes later.

The wind was the issue. The U.S. Weather Bureau reported 39 mph gales around the time the fire started, carrying low pressure air from the Atlantic Ocean, just off New England’s coast. Those gales had increased to 43 miles by 2 a.m., when firefighters were already throwing everything they had, mentally and physically, at the flames.

In local reporter Nat Worman’s account of the night, Worman quoted a firefighter saying, “If it hadn’t been for the wind, we could have stopped the fire right there.”

Worman described Orman Croft, the village manager for whom the hydroelectric facility is now named, Croft’s wife and David Blondo, the village clerk, frantically “spinning dials,” calling every emergency department in the county but Richford and Montgomery.

Maybe nothing conveys the scale of the catastrophe quite like the facts of the response — specifically, that 300 men responded to the fire, representing 21 fire departments, from as far away as Rouses Point, Chazy, West Chazy and Plattsburgh. Witnesses reported wondering about the glow on the horizon from well into Canada.

Or maybe it’s Worman’s description of Dexter and Bruce Spaulding — the latter expected to attend Tuesday’s presentation — rushing through the Rexall with four teenagers to save as much as possible, like the “invaluable” prescription list. The next hour, the store was gone.

If nothing else, it must be eyewitness Norman Vincelette’s statement to Worman.

“Nobody was saying anything,” Vincelette said, “just standing and watching, but their faces told more than they could ever put into words. I had seen this expression on faces before but never thoroughly understood the meaning.

“One elderly woman walked by me, weeping, and without turning her head, said, ‘There goes Swanton.’”

The SHS presentation is entirely free and open to the public, and begins at 6 p.m. at the Swanton Municipal Complex.

UPDATE: This story was updated at 1:45 p.m. on Monday to correct the location of Tuesday's presentation.

An attendee at the Eloquent Ogre sets up a match of Star Wars: Legion, a popular miniature game.

This Saturday saw the inaugural Eloquent Ogre, a gaming convention its hosts — the owners of the Eloquent Page and the Frozen Ogre — hope becomes an annual occurrence in St. Albans.

Board games lie out on a demonstration table during the inaugural Eloquent Ogre gaming convention at St. Albans City Hall.

ST. ALBANS CITY – When asked about whether the first ever Eloquent Ogre gaming convention was a success, organizer Erik Stumpf’s reply was immediate.

According to Stumpf, who organized the event with the Eloquent Page’s Donna Howard, more than 100 people passed through St. Albans City Hall Saturday for the gaming convention’s first day, numbers Stumpf said he felt were strong for a first-time event.

Saturday brought a different kind of success, though, for the Frozen Ogre co-owner and Eloquent Ogre organizer.

“People made connections today that will last beyond this convention,” Stumpf said. “We had people who live three houses apart, who never met each other but loved miniature painting and board games, who will now get together.”

Throughout the day, attendees filed between different board games and table-top games hosted by members of the region’s gaming community, ranging from classics like Dungeons and Dragons to newcomers like the Kickstarter-sourced Rising Sun.

Vendors, ranging from area jewelers and an Essex-based anime and manga seller to the Groennfell Meadery that recently moved to the St. Albans Town Industrial Park, crowded the entryway to city hall’s auditorium and the space immediately before the auditorium’s stage. Near the day’s end, more established vendors were joined by a local boy who, for the first time, operated his own table and sold trading card singles under the name K Games Magic Singles.

Even into the convention’s closing hours, after several vendors had left and organizers began packing up, a handful of tables remained fully staffed by prospective gamers as board games continued into the night.

According to Stumpf, virtually every game hosted throughout the day found enough interested attendees to play.

“People tried new things they never heard of,” Stumpf said. “People were open to new things and had a really good time.”

Howard shared much of Stumpf’s positivity about the day’s events.

“It’s a lot of fun,” Howard said late Saturday morning. “It’s people coming together and interacting with one another, meeting people they haven’t seen before, getting together and trading war stories.”

Attendee Gregory Besso of Enosburgh told the Messenger the convention filled a gap of sorts in Franklin County’s gaming community, agreeing that the day allowed members of the community to build connections they might not had been able to otherwise.

“I think a convention like this is a great way to get to know each other and play a few games,” Besso said. “Outside of Burlington, there isn’t a whole lot of opportunities.”

Asked about whether he would attend another Eloquent Ogre mini-convention, Besso immediately answered, “Absolutely, I would.”

According to Stumpf, he and Howard hope to bring the convention back again next year.

It was still too early for Stumpf to say exactly what a follow-up convention would look like, though he said he would hope to have better organized some of the card games listed on the Eloquent Ogre’s agenda and, maybe more importantly, “have even more people come” to the convention.

Still, he said he felt positive about the Eloquent Ogre’s first outing.

“I thank everybody for coming out today and having fun,” Stumpf said. “Hopefully we’ll do it again.” 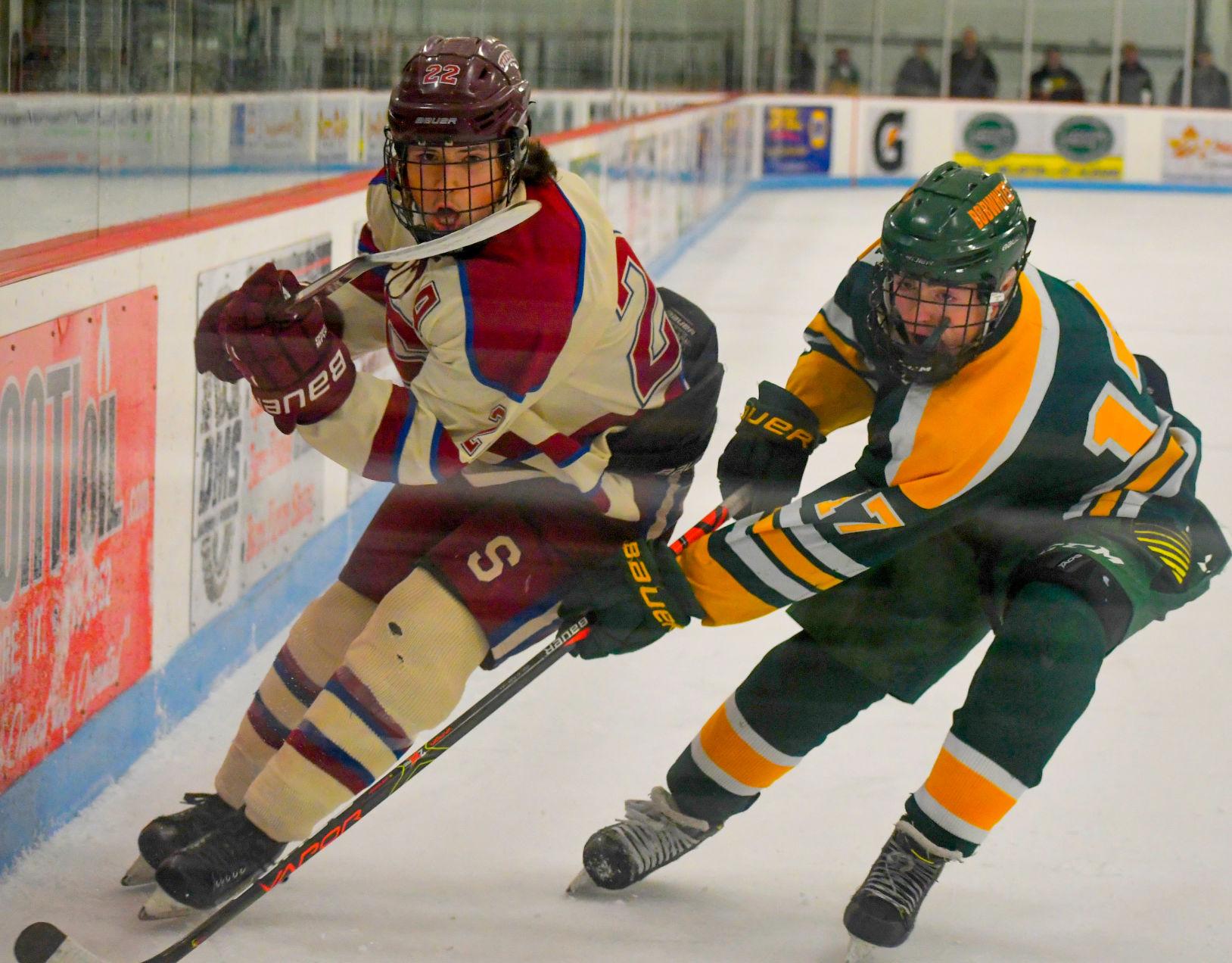 BFA’s Derek Nadeau works the puck out of the corner. Nadeau scored a hat trick in the Bobwhite’s victory on Saturday night. 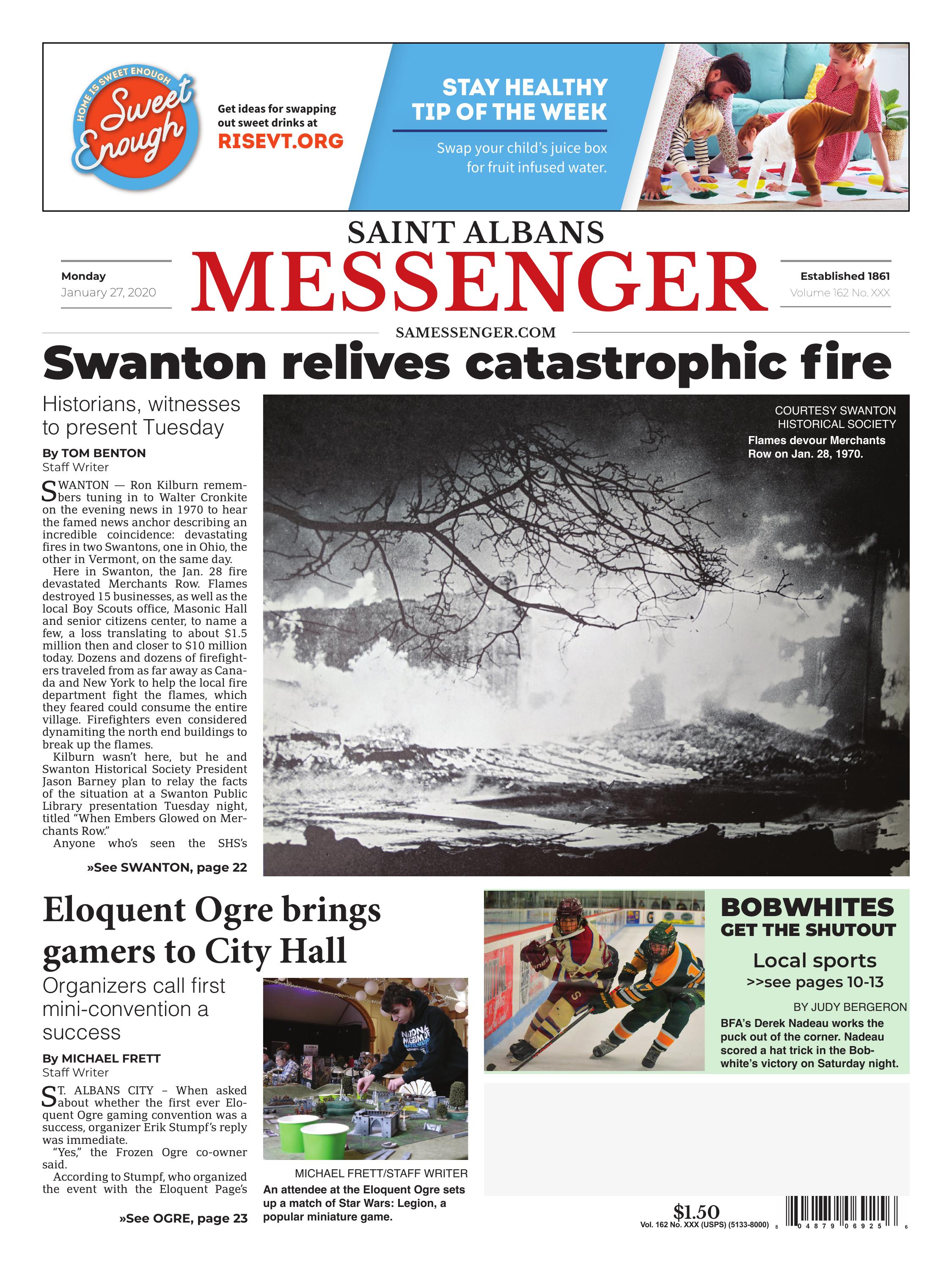