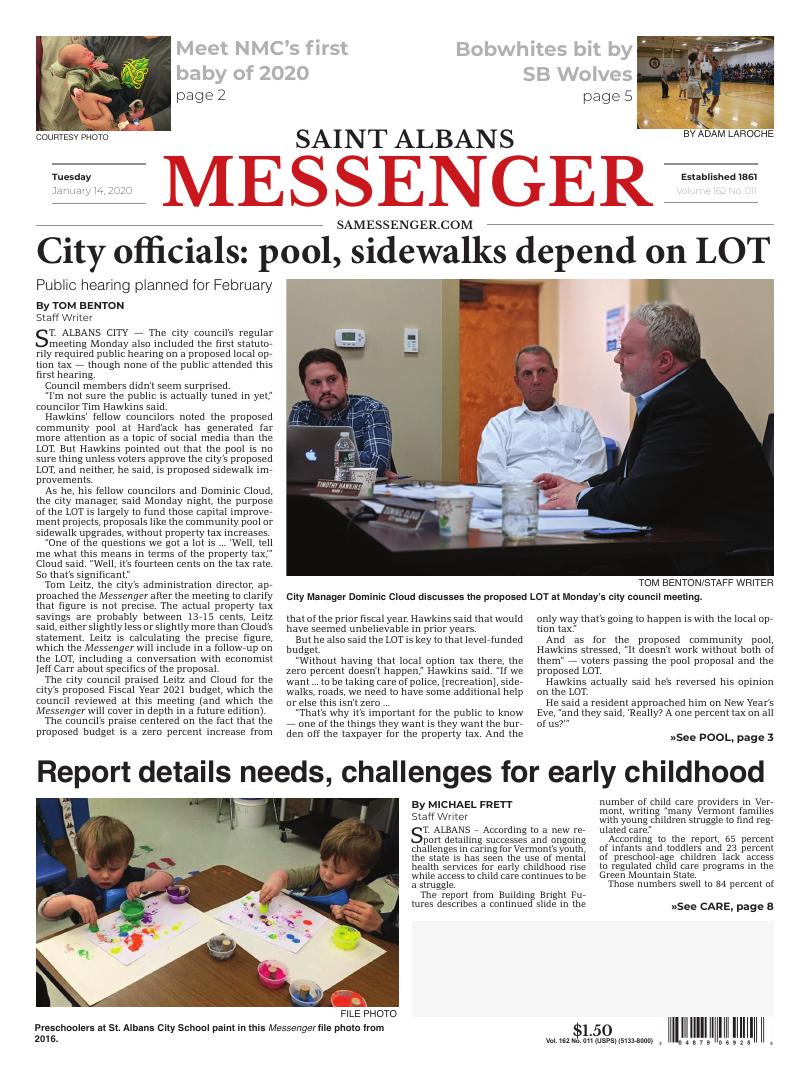 “I’m not sure the public is actually tuned in yet,” councilor Tim Hawkins said.

Hawkins’ fellow councilors noted the proposed community pool at Hard’ack has generated far more attention as a topic of social media than the LOT. But Hawkins pointed out that the pool is no sure thing unless voters approve the city’s proposed LOT, and neither, he said, is proposed sidewalk improvements.

As he, his fellow councilors and Dominic Cloud, the city manager, said Monday night, the purpose of the LOT is largely to fund those capital improvement projects, proposals like the community pool or sidewalk upgrades, without property tax increases.

“One of the questions we got a lot is ... ‘Well, tell me what this means in terms of the property tax,’” Cloud said. “Well, it’s fourteen cents on the tax rate. So that’s significant.”

Tom Leitz, the city’s administration director, approached the Messenger after the meeting to clarify that figure is not precise. The actual property tax savings are probably between 13-15 cents, Leitz said, either slightly less or slightly more than Cloud’s statement. Leitz is calculating the precise figure, which the Messenger will include in a follow-up on the LOT, including a conversation with economist Jeff Carr about specifics of the proposal.

The city council praised Leitz and Cloud for the city’s proposed Fiscal Year 2021 budget, which the council reviewed at this meeting (and which the Messenger will cover in depth in a future edition).

The council’s praise centered on the fact that the proposed budget is a zero percent increase from that of the prior fiscal year. Hawkins said that would have seemed unbelievable in prior years.

But he also said the LOT is key to that level-funded budget.

“Without having that local option tax there, the zero percent doesn’t happen,” Hawkins said. “If we want ... to be taking care of police, [recreation], sidewalks, roads, we need to have some additional help or else this isn’t zero ...

“That’s why it’s important for the public to know — one of the things they want is they want the burden off the taxpayer for the property tax. And the only way that’s going to happen is with the local option tax.”

And as for the proposed community pool, Hawkins stressed, “It doesn’t work without both of them” — voters passing the pool proposal and the proposed LOT.

Hawkins actually said he’s reversed his opinion on the LOT.

He said a resident approached him on New Year’s Eve, “and they said, ‘Really? A one percent tax on all of us?’”

Hawkins said there was too much going on at the time, namely celebrating the new year, and he felt it wasn’t an appropriate time to get into a discussion — which he said he now regrets.

“I wish I would have said, ‘Hey, call me tomorrow and I’ll tell you about it.’”

Tim Smith, the city’s mayor, said he thinks people don’t yet understand the nature of the proposed tax — a one percent tax on rooms, meals, alcohol and sales within city limits.

“People still view it as a direct tax,” Smith said. And he said in some cases — a person’s cable or electric bill, for example — it would be that.

But Smith stressed the LOT wouldn’t be a direct tax otherwise. It would be just be an additional one percent tacked on to bills when someone stayed at the Hampton Inn, when someone ate at a local restaurant or stopped at a bar — and also, as Cloud emphasized, when someone made an online purchase, the obvious example being from Amazon.

“This really is a new opportunity that allows us to capture some of those revenues off the Internet and reinvest them in the community,” Cloud said.

The council generally resolved that the LOT revenue “should reduce pressure on the property tax while continuing the city’s record of public investment,” as Cloud put it. But more specifically, the council decided at least 7.5 percent of the annual LOT revenue should go toward reducing recreation programming costs for disadvantaged people, five percent toward a “rainy day fund” and another five percent toward replenishing the city’s redevelopment fund.

The city government proposed putting the FY 2021 LOT revenue toward the pool proposal and neighborhood sidewalk projects. The combined cost of those two projects is more than $4 million.

“It will directly benefit St. Albans City residents and builders,” Cloud said. “That would otherwise have to be paid for just by the property tax or not done at all.

Cloud stressed that voters aren’t giving up any budgetary control by approving the LOT — it would go through the same public budgeting process as any other city funds.

The city government hosts a second public hearing on the LOT on Feb. 10 at 7 p.m. in City Hall. Cloud said he expects Carr will attend to answer voters’ questions. 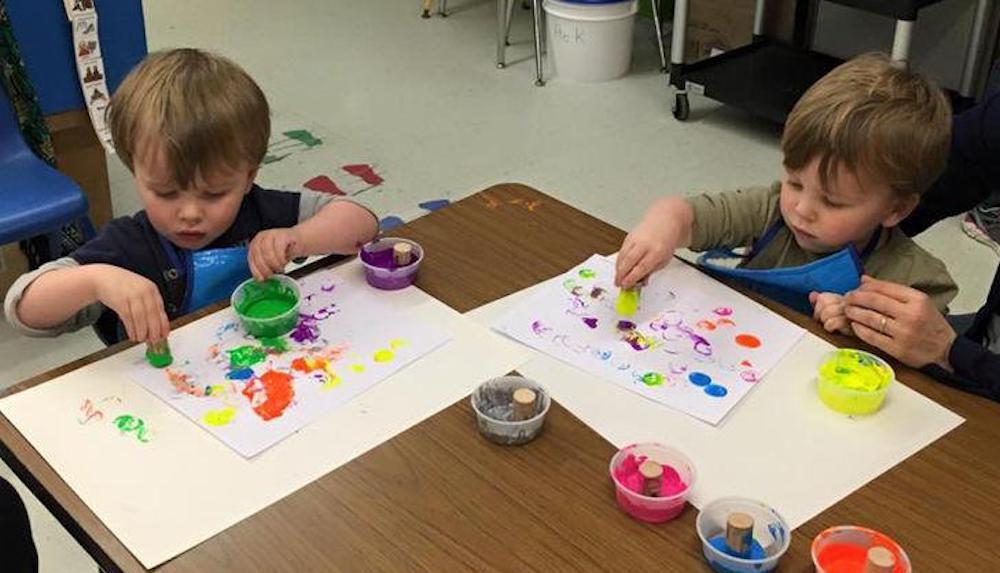 Preschoolers at St. Albans City School paint in this Messenger file photo from 2016.

ST. ALBANS – According to a new report detailing successes and ongoing challenges in caring for Vermont’s youth, the state is has seen the use of mental health services for early childhood rise while access to child care continues to be a struggle.

The report from Building Bright Futures describes a continued slide in the number of child care providers in Vermont, writing “many Vermont families with young children struggle to find regulated care.”

According to the report, 65 percent of infants and toddlers and 23 percent of preschool-age children lack access to regulated child care programs in the Green Mountain State.

Those numbers swell to 84 percent of infants and toddlers and 64 percent of preschool-age children when considering access to “high-quality, regulated child care programs.”

In another area in the report, Building Bright Futures wrote the number of children accessing mental health services in Vermont swelled from 1,708 in 1999 to 3,322 in 2018 – almost doubling in the 20 years observed in the report.

“Over time, Vermont’s mental health system has seen a consistent increase in young children accessing many types of services from designated agencies, and a striking growth in the use of crisis services,” the report read.

According to Building Bright Futures, one in five children between the ages of six- and eight-years-old has a social, emotional or behavioral health condition.

Among children assessed with the Child and Adolescent Needs and Strengths (CANS) tool used by mental health service providers for children where social-emotional difficulties emerge, 89 percent were reported to have a history of trauma and only half reported having a stable caregiver in their lives.

Vermont at large struggles with a disproportionate amount of prenatal substance use, with the report signaling out prenatal alcohol use in particular. According to Building Bright Futures, “prenatal alcohol use... is one of Vermont’s leading preventable causes of birth defects.”

While opioid use has received a lot of attention in light of the ongoing opioid epidemic, Building Bright Futures found that the rate of infants born exposed to opioids in Vermont actually peaked five years ago and have since leveled off.

The report attributes this to Vermont’s commitment to “ongoing systems of care for screening and diagnosis of substance use disorder in pregnancy” and to communities “working together to provide treatment and supportive care for these disorders.”

For some time now, local organizations involved in social services and economic development in Franklin and Grand Isle counties have wrestled with a thin number of child care services.

The quality of those programs have increased, however, with almost a third of the regulated programs in 2019 qualifying as “high quality” according to Vermont’s Step Ahead Recognition System – or STARS.

Just shy of half of the regulated programs offered in Franklin and Grand Isle counties were also ranked according to the state’s STARS criteria, and about 20 percent did not participate in STARS grading. 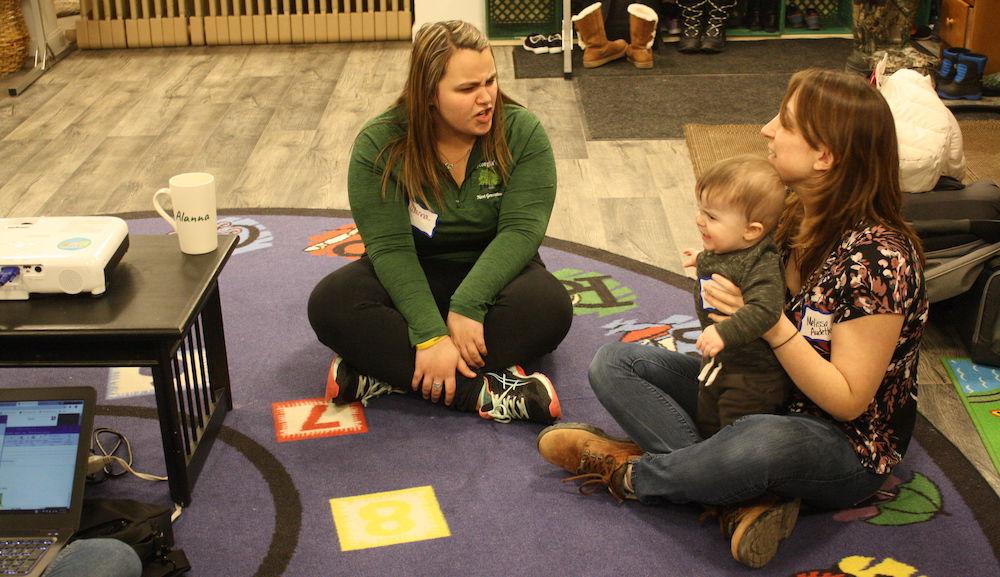 An early educator at Georgia's Next Generation plays with an infant during a networking event at the child care center in early 2019.

Community organizers have noticed the lack of child care in the region, signaling the region’s lack of childcare as one of the “formidable four” barriers to employment.

The community members behind the Enosburgh Initiative spent entire meetings last spring dedicated to the shortage of child care options in Franklin County, with social workers pointing out that providers were moving out of the region, leaving for jobs with health care benefits or outright retiring altogether.

A shortage of childcare comes at a time when the region stands as one of the few places in Vermont where the population of children is at least holding steady in light of population losses elsewhere in Vermont.

According to the Building Bright Futures report, there were 5,907 children under the age of nine in Northwest Vermont, a population count deemed “consistent” with the population of 6,001 children reported for the region in 2012.

In the Building Bright Futures report, organizations in Franklin and Grand Isle counties were labeled as leaders for servicing children, with the report writing families in the two counties “continue to trail blaze in areas of perinatal, early childhood and overall family mental health.”

In the report, Building Bright Futures also writes that organizations in the two counties have also been successful in “working to reduce food insecurity, support early childhood development, and engage an active, motivated network of early care providers.”

Still, larger statewide trends identified in the report as barriers for childhood health have been acutely felt in Northwest Vermont, including the region’s notable lack of affordable housing.

According to Building Bright Futures, “the cost and availability of housing is a significant challenge facing Vermont families,” with more than half of households reporting they pay more than 30 percent of their income on rent.

“Stable housing is one key support to provide children with a positive environment to learn and grow,” the report read.

At a forum detailing the challenges with affordable housing in Franklin County, politicians and both for-profit developers and nonprofit leaders agreed there was an acute lack of affordable housing within Northwest Vermont and that housing stock failed to keep pace with the region’s population growth that, while still slow, easily outpaced most of Vermont.

During that forum, Northwest Regional Planning Commission director Catherine Dimitruk presented legislators with a report that found a rental market in Franklin County that would require the average renter earn almost $62,000 a year for their rent to be considered affordable.

In order for the average family of four to meet their basic needs in Vermont, the family would need to earn $84,736 annually in 2018.

Working full-time at minimum wage with two wage earners in a family would only earn a family $43,680 in Vermont, according to the report.

The amount of children under the age of nine-years-old in custody of the Dept. of Children and Families from Northwest Vermont has grown to 84, according to the report.

In a letter prefacing the report, Building Bright Futures’ director Morgan Crossman described the report as a “snapshot of how we are doing” in caring for the state’s youngest children.

“The well-being of children is an important way we can measure our success as a society,” Crossman wrote. “Ensuring our optimal developmental outcomes and well-being for our youngest children is a vital role and can help us to grow a healthy economy and community.” 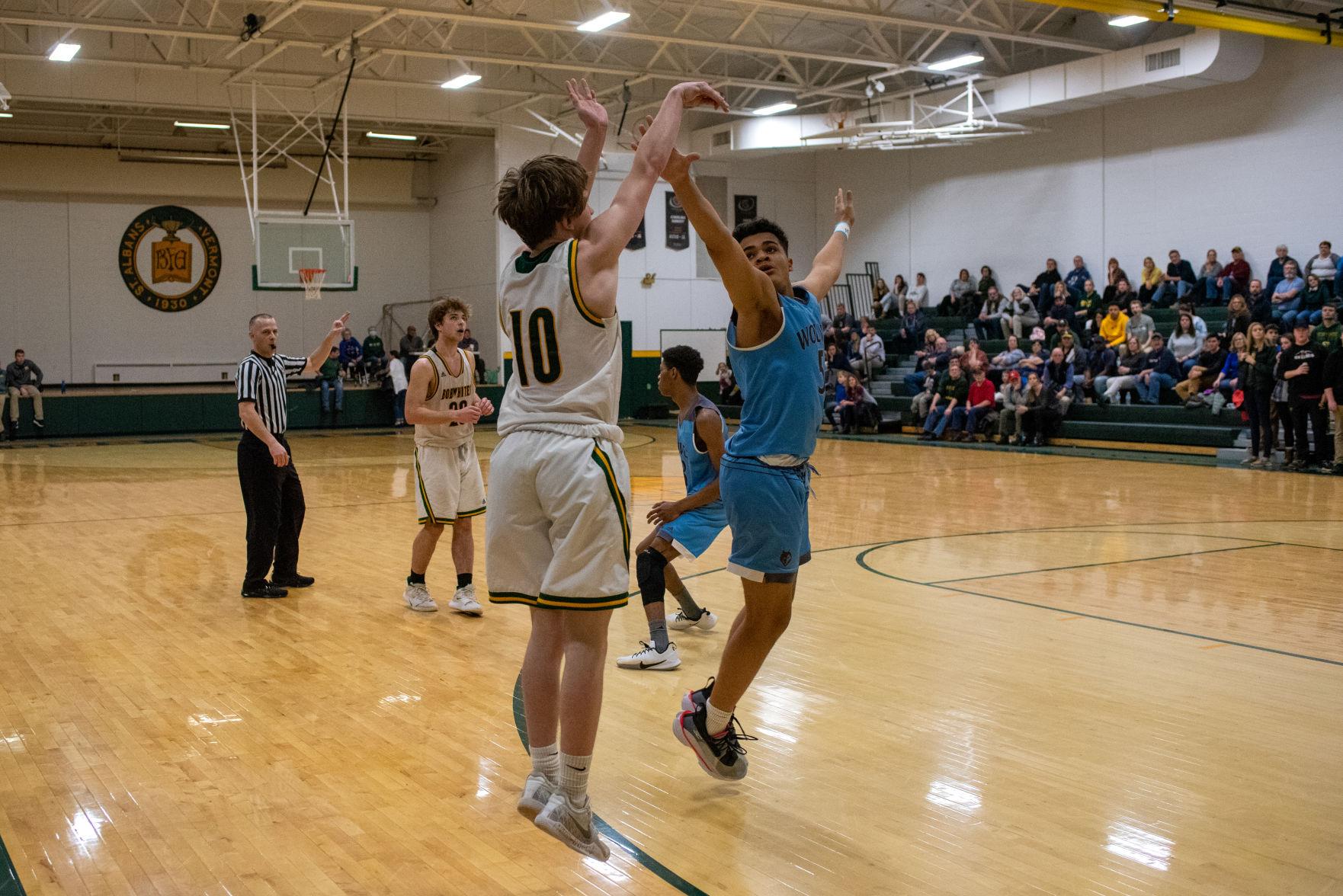 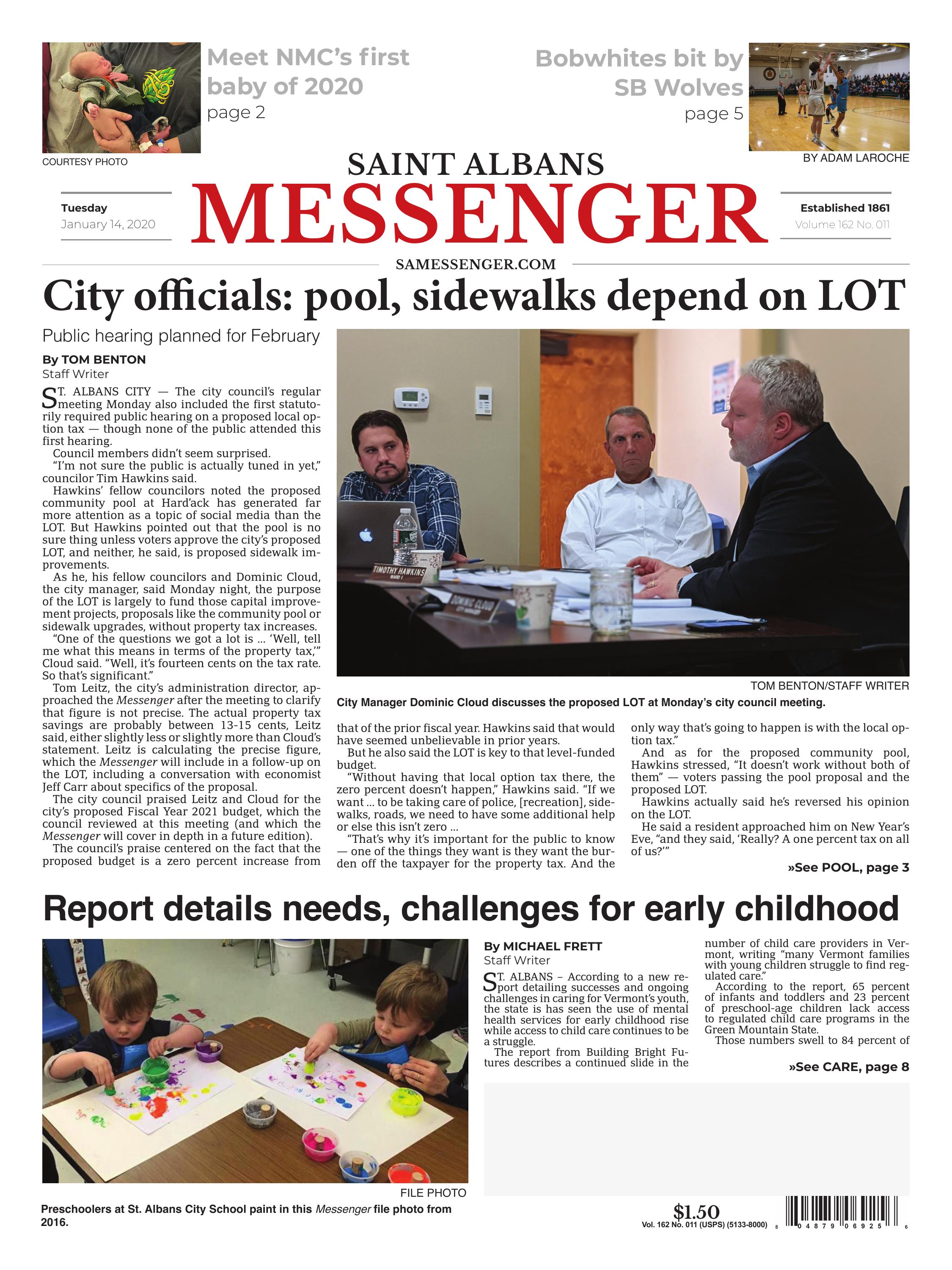