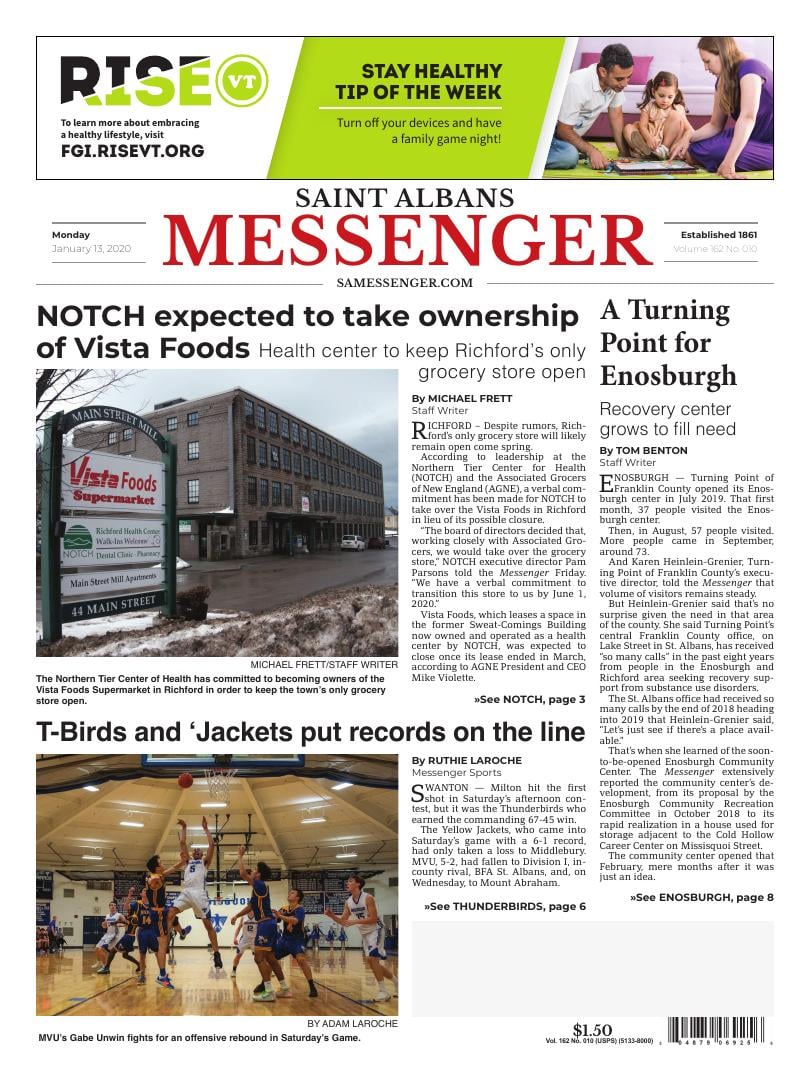 The Northern Tier Center of Health has committed to becoming owners of the Vista Foods Supermarket in Richford in order to keep the town’s only grocery store open.

According to leadership at the Northern Tier Center for Health (NOTCH) and the Associated Grocers of New England (AGNE), a verbal commitment has been made for NOTCH to take over the Vista Foods in Richford in lieu of its possible closure.

“The board of directors decided that, working closely with Associated Grocers, we would take over the grocery store,” NOTCH executive director Pam Parsons told the Messenger Friday. “We have a verbal commitment to transition this store to us by June 1, 2020.”

Vista Foods, which leases a space in the former Sweat-Comings Building now owned and operated as a health center by NOTCH, was expected to close once its lease ended in March, according to AGNE President and CEO Mike Violette.

“We’ve worked very diligently over the years to increase the business there, which we have – the people in town have been very supportive,” Violette said. “Unfortunately, as costs continue to rise… even though we’ve raised the sales level, we just haven’t been able to have the store sustain itself on its own.”

Vista Foods, an AGNE brand with stores also in Newport, Vt., and in New Hampshire, was only the most recent tenant of the Sweat-Comings building, taking over at the spot a few years ago when the previous grocery store tenant folded.

Without Vista Foods, Richford would be left without a grocery store and limited options for purchasing food, save for some food available at gas stations and the Dollar General situated just outside of Richford’s downtown.

Outside of Richford, the closest dedicated grocery store is in Enosburgh.

Parsons said part of NOTCH’s interest in taking up the grocery store was to guarantee access to food within Richford, something she said was an important part of NOTCH’s mission as a Federally Qualified Health Center (FQHC) – a federally-reimbursed health care organization.

“In some ways, food is the basis of FQHCs,” Parsons said. “If our patients can’t access good quality food, what can we do? That’s true in all our offices, wherever we are, so it’s very close to our mission to take care of the population that we’re serving.”

Vista Foods, according to Parsons, regularly receives a lot of walking traffic, and there were fears about what the store’s closure would mean for customers who might not have access to a vehicle.

Vista Foods also serves as an employer in Richford, providing about 20 jobs in the form of a handful of full-time positions and part-time employment.

According to Violette, had the store closed outright, AGNE had plans to transfer the Richford Vista Foods’ employees to other stores operated by AGNE, but AGNE’s president admitted, “travel is a little tough for some of them.”

According to Parsons, the details of NOTCH’s takeover of the store still needed to be discussed before NOTCH assumes ownership near the end of spring or early summer – including a new name for the store – but the health center hoped to maintain Vista Foods’ staff as it transitions into ownership.

Likewise, much of the infrastructure for operating the store was already owned by NOTCH, and Parsons said AGNE would be leaving the health center with a store that was “in good shape.”

“I would say AG has done a remarkable job the last three years in building up the store,” Parsons said. “It looks good and is busy, so it’s at a point where it’s not going to be like starting from square one.”

As the store’s landowners, Parsons said NOTCH would also be able to negate some of the costs that made Vista Foods less sustainable under AGNE. “There will be costs that AG puts on the store that we wouldn’t have to,” Parsons said, before admitting, “It still will run close to breaking even.”

She also said she expected NOTCH’s ownership to only be temporary.

“I would say that, long term, it may not be under NOTCH, but for the next couple years, I’m sure it will be,” Parsons said. “We need to see if there’s a way to develop it some other way.”

She floated the idea of a community-owned food cooperative, a conversation that, according to Parsons, had yet to happen in Richford, and also said NOTCH’s direct ownership of the store might leave room for other programming connected to the health center.

Violette and Parsons said AGNE, which also operates as a food distributor based out of New Hampshire, planned on supporting the store through its transition to NOTCH.

“The people of Richford have been great to us and very supportive, and we’ve got excellent associates in the store,” Violette said. “If we can maintain that, that’d be wonderful.”

MVU’s Gabe Unwin fights for an offensive rebound in the fourth quarter of Saturday’s Game.

SWANTON — Milton hit the first shot in Saturday’s afternoon contest, but it was the Thunderbirds who earned the commanding 67-45 win.

The Yellow Jackets, who came into Saturday’s game with a 6-1 record, had only taken a loss to Middlebury. MVU, 5-2, had fallen to Division I, in-county rival, BFA St. Albans, and, on Wednesday, to Mount Abraham.

Fans of both teams filled the Thunderdome, and the atmosphere at tip-off was electric.

MVU began the first quarter with an 11-4 lead after a lock-down defense forced Milton into numerous costly turnovers.

After quickly jumping ahead, MVU allowed Milton to creep back into the game, the teams finishing the first quarter with MVU holding a slim 13-10 lead.

In the second quarter, MVU quickly tacked on four points, bringing the T-bird lead to 9 within the first three minutes of play.

The teams left for halftime, MVU holding the 30-25 lead, after playing two-quarters of basketball marked by intense defensive pressure and a consistent offensive effort.

A quick three for Milton in the first minute of the third closed the gap 30-28.

Gabriel Unwin’s And-1 midway through the third brought the crowd to their feet.

Unwin earned another And-1 halfway through the fourth, sinking the free throw and giving MVU their 60th point.

Unable to recover, the Jackets dropped their second game of the season.

“We had 15 good minutes in the first half, and we played a very good second half,” said MVU coach Matt Walker.

“Milton always plays hard; they are an aggressive and attacking team,” said Walker.

“We moved the ball very well in the second half, and we handled the press--we’ve been pressed a lot, so we’re getting better at it.”

Colbey Theberge’s selfless play helped open up many opportunities for the Thunderbirds throughout the game.

“We always put Colbey on the hardest guy,” said Walker. “It was his goal to keep Kyle Brown from going off--that kid can really light it up when he gets going. Defending Brown was Colbey’s contribution to the game today.”

“Kyle Brown likes to hit threes from deep, and our main goal was to stop him from scoring all the points, which we did,” said Theberge. “We have an offense where we should know where everyone is. Instead of shooting a somewhat contested shot, we swing it one more time to find that wide open three from Ethan who doesn’t miss a lot of wide open threes.”

Offensively, MVU’s trio of Unwin, Walker, and, Creller proved to be too tough for Milton.

“Gabe had his best offensive game of the year today,” said Walker. “He’s hard to stop. He’s got inside, outside, and he showed a couple of nice fadeaways and a couple of nice drives to the hoop. It was fun to watch.”

After the loss to Mount Abe, the Thunderbirds were determined to earn the win on Saturday.

“We came in hungry today,” said Unwin,” and defensively, we took care of them. We brought them to the center of the paint, and me and Matt (Curtis) cleared them out with blocks. I’m very proud of as a team.”

Patrick Walker, who co-led the team with Unwin on the offensive effort, was pleased with the win.

“This shows that we’re here to compete and to play and that we can play with the teams on our schedule,” said Patrick.

“There are four or five of us who can go out and have a night offensively. We’re deep, and it’s hard to guard all of us.”

Unwin summed up the feelings of his teammates as MVU fans celebrated behind him.

“We are concentrating on us, on the team,” said Unwin. “We knew that we had to bring it together. This was our year--we knew we had to take care of it.”

Gabriel Unwin and Patrick Walker led the Thunderbirds with 22 points each, and Ethan Creller had 11.

Then, in August, 57 people visited. More people came in September, around 73.

But Heinlein-Grenier said that’s no surprise given the need in that area of the county. She said Turning Point’s central Franklin County office, on Lake Street in St. Albans, has received “so many calls” in the past eight years from people in the Enosburgh and Richford area seeking recovery support from substance use disorders.

The St. Albans office had received so many calls by the end of 2018 heading into 2019 that Heinlein-Grenier said, “Let’s just see if there’s a place available.”

That’s when she learned of the soon-to-be-opened Enosburgh Community Center. The Messenger extensively reported the community center’s development, from its proposal by the Enosburgh Community Recreation Committee in October 2018 to its rapid realization in a house used for storage adjacent to the Cold Hollow Career Center on Missisquoi Street.

The community center opened that February, mere months after it was just an idea.

Heinlein-Grenier said she reached out to ECRC chair Ivonne Kio upon learning of the then-forthcoming community center and set up a meeting. Well, a few meetings — Heinlein-Grenier said every time she planned to drive out to Enosburgh and meet Kio, an ice storm struck, leading to months of “phone tag.”

But the two finally met that April. Shortly thereafter, Heinlein-Grenier said, Kio’s board offered Turning Point office space in the community center at a “generous price.”

“They’ve just been great to work with,” Heinlein-Grenier said.

Turning Point’s Enosburgh office was initially open just one day a week — which might make the numbers above that much more impressive.

“That’s the best way to spread that word,” Heinlein-Grenier said. “Because everybody knows somebody.”

The Enosburgh center had been open less than a month when, Heinlein-Grenier said, the Vermont Community Foundation called. She said VCF representatives told her the organization had extensively researched Turning Point of Franklin County’s background and wanted to support its work.

“They said, ‘What do you need? What would you like?’” Heinlein-Grenier remembered. “And I just thought, ‘Enosburgh.’”

VCF reps sent grant opportunities — and just this past week, as the Messenger reported, the VCF awarded Turning Point of Franklin County about $18,000 to open Turning Point’s Enosburgh center for a second day.

Now the Enosburgh center is open Thursdays and Fridays upstairs in the community center.

All its services are free.

The “Recover in Color” support group begins at 9 a.m. on Fridays, with a recovery book support at 12 p.m.

Heinlein-Grenier said transportation was the biggest obstacle for many struggling to recover in the Enosburgh and Richford area, both isolated communities on the county’s outskirts.

“The need is really there,” she said. “There’s very little recovery support in those areas.”

And while Heinlein-Grenier said any recovery space is valuable, she also said the Enosburgh Community Center is uniquely warm. Volunteers extensively restored the building, not just cleaning it up but painting and similar cosmetic work that continues to this day. 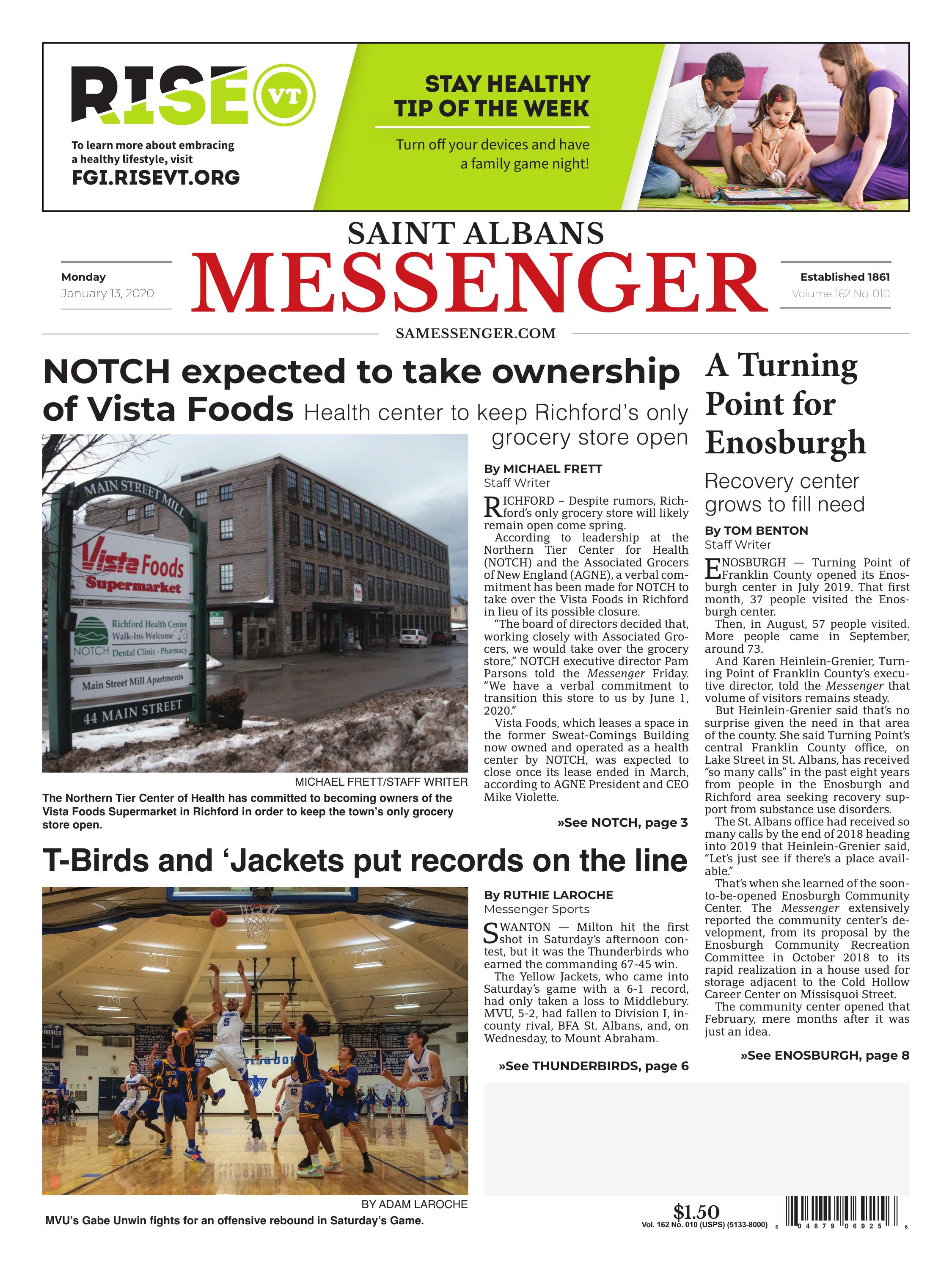