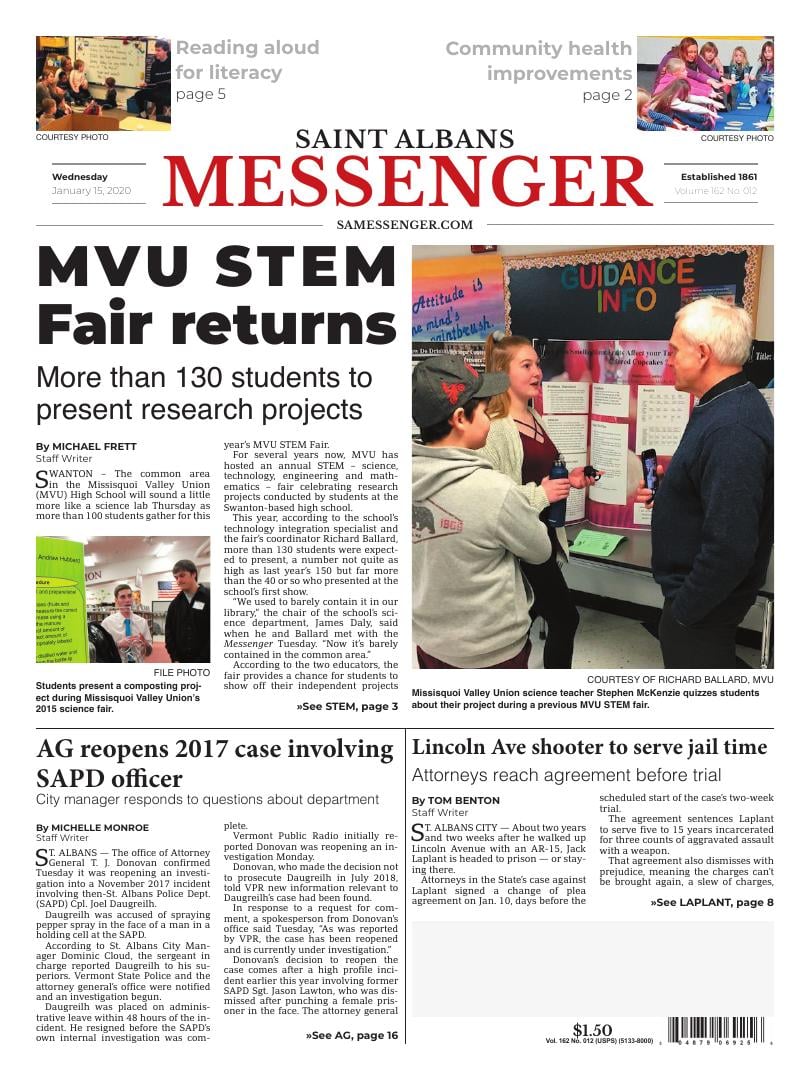 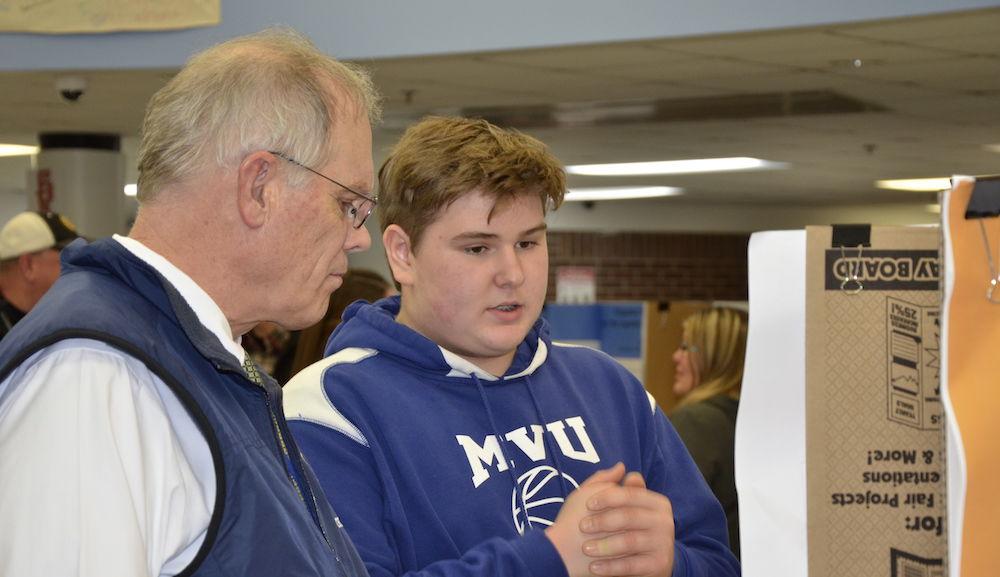 SWANTON – The common area in the Missisquoi Valley Union (MVU) High School will sound a little more like a science lab Thursday as more than 100 students gather for this year’s MVU STEM Fair.

This year, according to the school’s technology integration specialist and the fair’s coordinator Richard Ballard, more than 130 students were expected to present, a number not quite as high as last year’s 150 but far more than the 40 or so who presented at the school’s first show.

“We used to barely contain it in our library,” the chair of the school’s science department, James Daly, said when he and Ballard met with the Messenger Tuesday. “Now it’s barely contained in the common area.”

According to the two educators, the fair provides a chance for students to show off their independent projects pursued under the school’s Next Generation Science Standards curricula – a state-enforced reform to science education placing a greater emphasis on student skills. 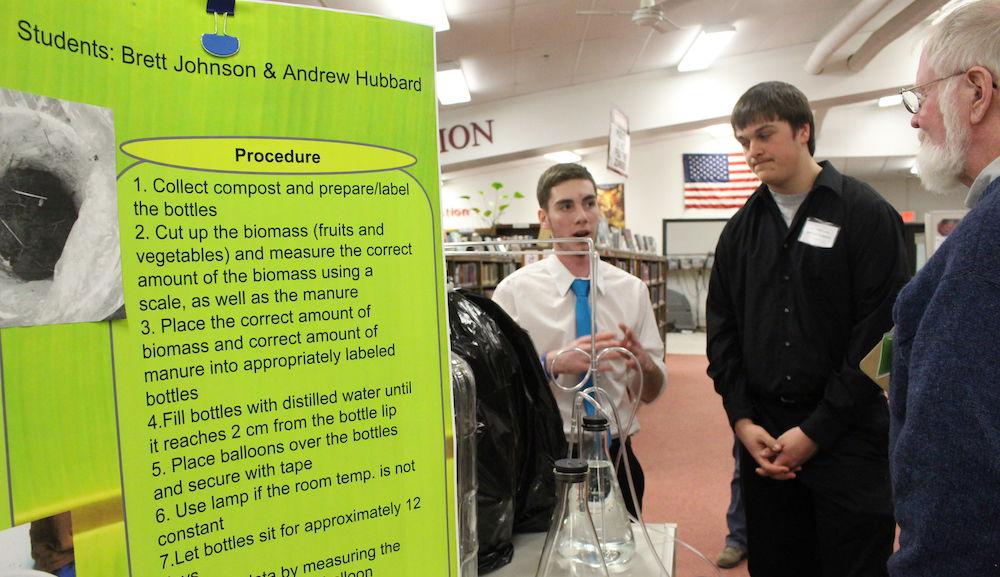 “We’re hoping the kids will learn how to do a scientific project and follow through all of the scientific method,” Ballard said. “The students get to choose their own topics and they get to research it and then we have this one big night.”

“The independent research project that students do addresses nearly all of the practices of science,” Daly said. “They ask a question, they plan and investigate a question over the long term, they have to analyze and represent their data.”

While participation in the show itself is entirely voluntary, but Ballard and Daly agreed the chance for students to display work was an important opportunity.

“It gets the kids talking to the public, and I think that’s a big skill students need to have,” Ballard said. “I always tell kids if you don’t get anything else out of this, your ability to share with adults and people walking by is going to be a huge skill in your life.”

“From feedback I get from students who participated in this event, it becomes a talking point for their future careers or school,” Daly said. “Every student has a grade... but not every student did that particular project.”

The fair itself runs for only two hours Thursday night. During that time, students are interviewed about their projects by members of MVU’s staff and a team of about two dozen volunteer judges, most of who come from professional backgrounds within the STEM fields.

Scores from those judges are compiled and winners at both the middle school and high school level are awarded cash prizes courtesy of donations and the local STEM Challenge Initiative, with one high-scoring high school senior typically recommended for a STEM-related scholarship.

Some students might even find themselves recommended for larger science fairs outside of Swanton – independent research projects from MVU students have been known to net a few coveted awards from past state STEM fairs. 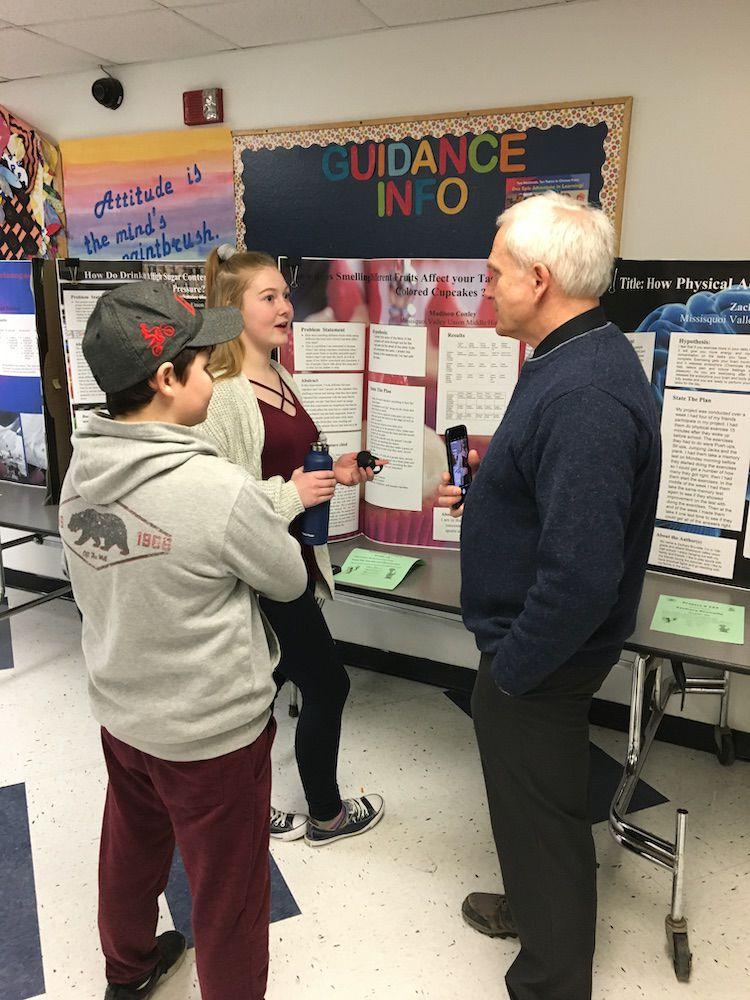 Students have taken the loosely defined STEM field and applied it in all manner of projects, as well, according to Ballard and Daly.

There have been projects gauging brainwaves and responses to art therapy and music, projects tracking the effects of a hockey stick’s curvature on a puck, and projects ranging from robots to bacteria and anything in between.

Highlights pinned to an MVU wall from previous fairs explored topics ranging from biodegradable filters to the effects of sugar on fruit flies, and, according to Ballard, at least one current high schooler planned on bringing a study done during a summer session with a University of Vermont professor to Thursday’s fair.

“I’m interested in seeing the variety of topics picked,” Ballard said. “You can see a kid really take something and run with it.”

“Any kind of reasonable, testable project can be tested,” Daly said.

Sometimes students’ results are that there was no result or that a project did not work, which was just as important as a proven hypothesis, according to Ballard. “It broke and that’s okay – you learned something,” Ballard, himself formerly a longtime science teacher, said. “That’s science.”

Students have also used their projects presented in the fair as a springboard of sorts. According to Daly, those projects and the ensuing fair have “been a launching point for a lot of student research careers.”

Students’ projects are printed onto bona fide research posters courtesy of a printer purchased by the school through a grant, meaning students’ projects look like their college-level and professional counterparts when posted in MVU’s common area.

According to these two MVU educators, however, the most important part of the fair might just be the excitement from the students themselves as they present the projects they themselves steered from day one. 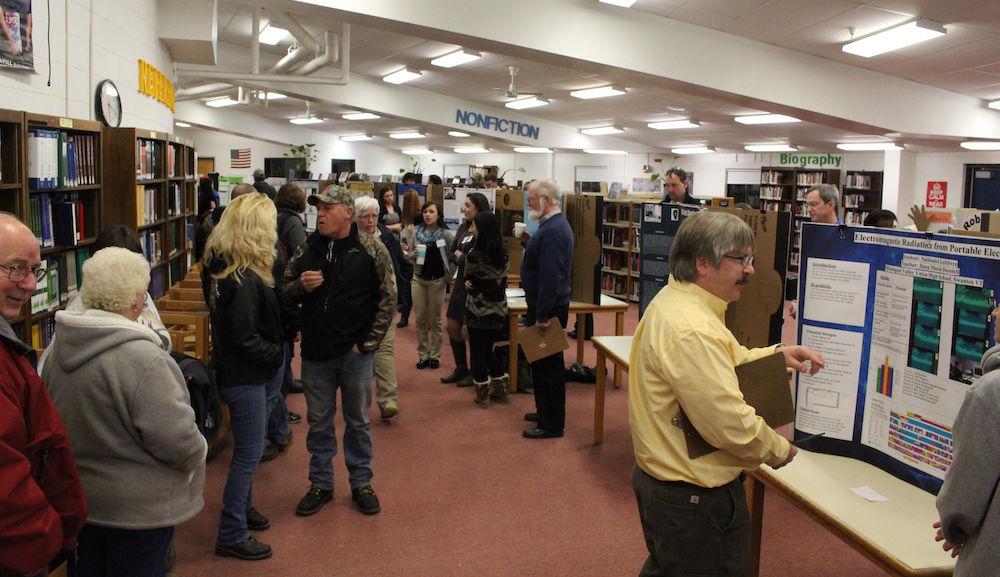 “These kids really know what they did... so when they’re asked about it, they’re excited about it,” Ballard said. “Kids really get a lot out of it.”

For those interested in attending this year’s STEM fair, doors at MVU open to the public at 5 p.m. and run until 7 p.m. that night.

If anyone is interested in judging, Ballard asks that they reach out online at tinyurl.com/mvustem2020.

Daugreilh was accused of spraying pepper spray in the face of a man in a holding cell at the SAPD.

According to St. Albans City Manager Dominic Cloud, the sergeant in charge reported Daugreilh to his superiors. Vermont State Police and the attorney general’s office were notified and an investigation begun.

Daugreilh was placed on administrative leave within 48 hours of the incident. He resigned before the SAPD’s own internal investigation was complete.

Donovan, who made the decision not to prosecute Daugreilh in July 2018, told VPR new information relevant to Daugreilh’s case had been found.

In response to a request for comment, a spokesperson from Donovan’s office said Tuesday, “As was reported by VPR, the case has been reopened and is currently under investigation.”

Donovan’s decision to reopen the case comes after a high profile incident earlier this year involving former SAPD Sgt. Jason Lawton, who was dismissed after punching a female prisoner in the face. The attorney general has charged Lawton with misdemeanor assault.

With two incidents having come to light within three years, the question becomes one of whether or not there is a culture problem at the SAPD.

The SAPD employs 30 people and “in any organization from time to time people are going to use poor judgement,” said Cloud, adding that’s what policies and procedures are intended to address. In the case of Daugreilh, “it was handled in the best way possible,” said Cloud. “The process and the policies worked.”

“We continue to be very proud of the department... and the way our management team responded when problems arose,” said Cloud. “If the management team wasn’t addressing it, we’d have very different concerns.”

The role of management is to set expectations and hold officers accountable, Cloud said, and he is confident the SAPD leadership is doing that.

In the case of Lawton, Chief Gary Taylor previously explained that Lawton was able to conceal his actions through a loophole in which management reviewed only some uses of force by officers, who are required by the SAPD to file a report for every use of force. After the Lawton incident, that policy was revised so every use of force is reviewed by a lieutenant.

Critics have suggested that when reviewing use of force by officers, the entire context be taken into consideration, not just the moments immediately surrounding the incident. It’s a perspective with which Cloud agrees, saying context matters.

He also welcomed a broader discussion of criminal justice reform.

Cloud suggested they consider the question of how communities are policed when there is a chronic shortage of officers, an opiate epidemic, a heavily armed population, and a push to always use as little force as possible. “I don’t think anybody has fully grasped the complexity of that problem,” he said. “It’s not black and white. It’s very grey.

Jack Laplant at the time of his January 2018 arrest.

Jack Laplant at the time of his January 2018 arrest.

ST. ALBANS CITY — About two years and two weeks after he walked up Lincoln Avenue with an AR-15, Jack Laplant is headed to prison — or staying there.

Attorneys in the State’s case against Laplant signed a change of plea agreement on Jan. 10, days before the scheduled start of the case’s two-week trial.

The agreement sentences Laplant to serve five to 15 years incarcerated for three counts of aggravated assault with a weapon.

That agreement also dismisses with prejudice, meaning the charges can’t be brought again, a slew of charges, including multiple counts of violating an abuse prevention order and court-ordered conditions of release.

Prosecutors charged Laplant with a new count of aggravated assault with a deadly weapon the day all parties signed the plea agreement.

The added count charged that Laplant “while armed with a deadly weapon threatened to use the deadly weapon on another person” on or around Jan. 2 — the day Laplant engaged in a shooting with multiple officers of the St. Albans Police Dept.

The court calendar does not yet include a date for Laplant’s sentencing.

One count of attempted second-degree murder was among the dismissed charges. That carried a minimum sentence of 20 years and maximum of life.

The VSP investigation included multiple visits to Lincoln Avenue by the Crime Scene Search Team, which ultimately found home damage and a bullet casing prosecutors charged was evidence that Laplant shot at the SAPD’s Lt. Jason Wetherby with intent to kill.

Wetherby was one of three SAPD officers who responded to the scene, including Michael Malinowski and former officer Jason Lawton.

The Vermont Attorney General’s Office investigated the Jan. 2 shooting due to officer involvement and did not press charges.

The VSP investigation determined Malinowski and Lawton did fire their guns during the shooting, as did Laplant, who was armed with an AR-15-style assault rifle. But investigators concluded Laplant fired first, based on SAPD body camera footage.

The key piece of evidence as to Laplant firing at Wetherby was a piece of copper retrieved from a Lincoln Avenue home, which the Vermont Forensic Laboratory determined was a .22-caliber bullet jacket that could have come from Laplant’s gun, on top of damaged vinyl siding near the house in question.

VSP investigators concluded those are evidence that Laplant shot at Wetherby, since Wetherby directly ran past the house in question at the time of the shooting.

The case’s attorneys, namely Bob Katims, Lawton’s defense counsel, and state prosecutor Deb Celis, debated whether that evidence could be legally introduced in the trial — ultimately a moot point, given the pre-trial agreement.

Police responded to Lincoln Avenue that night after callers reported a man walking the neighborhood with a rifle.

Wetherby told VSP investigators he arrived on scene in a police cruiser to see Laplant aiming the rifle at him. Wetherby said he threw the cruiser in reverse, then took cover by a nearby building, according to court affidavits.

VSP Det. Sgt. Robert McKenna noted in his affidavit that one can hear the first shot fired in Wetherby’s body cam footage. McKenna wrote the shot came as Wetherby ran east through the intersection of Lincoln Avenue and Ferris Street.

The shooting did not injure any of the SAPD officers, but officers ultimately subdued Laplant after a bullet grazed his stomach, according to the affidavits.

Laplant was 26 at the time of the incident.

Neighbors told police they hear Laplant call, “Just shoot me,” to no one in particular ahead of the incident, per court affidavits.

The SAPD officers reported Laplant telling them he only fired his gun in the air and that he just wanted to die.

The shooting came the night after Laplant’s arrest on a charge he assaulted his girlfriend at the time. Laplant was reportedly in the neighborhood of her home at the time of the shooting.

Laplant has been held without bail since his January 2018 arrest. 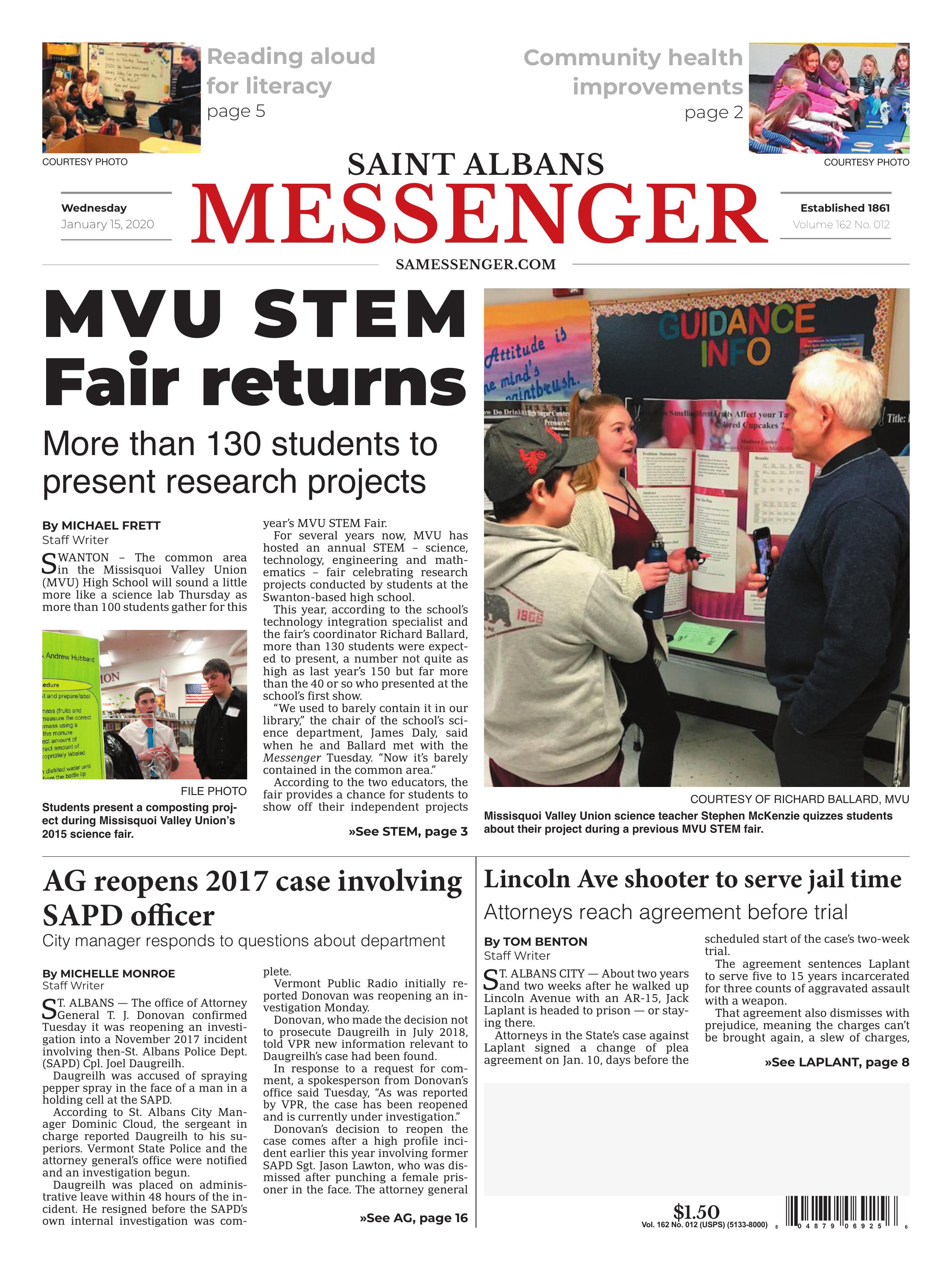